Cercocarpus is the largest genus of actinorhizal plants in the Rosaceae (rose family) (Vanden Heuvel, 2002). Actinorhizal plants are nitrogen-fixing plants. There are ≈10 species of Cercocarpus in the genus. Cercocarpus montanus (alder-leaf or true mountain mahogany) is the only deciduous species in the genus (SEINet Portal Network, 2020). Cercocarpus montanus is native to regions of the western United States, from Montana to Texas, where there is between 25 to 58 cm of annual precipitation [Shaw et al., 2004; U.S. Department of Agriculture (USDA), 2020a]. It is a shrub or small tree of 0.6 to 4 m in height with leaves that are dark green above and whitish beneath (Fig. 1A and B). Flowers are borne in small clusters, and fruits are plumose style with elongated achenes (Fig. 1B) (Shaw et al., 2004). It possesses an extensive root system and adapts to medium to coarse textured soil. It is actinorhizal and considered an excellent shrub for reclamation in the western United States (Rosner et al., 2003). Actinorhizal plant can grow in soil with poor fertility and is also adapted to stresses such as drought, flooding, and salinity (Diagne et al., 2013). Its ability to fix nitrogen through symbiosis with actinobacteria (Frankia) makes it a potentially sustainable shrub for urban landscapes because application of nitrogen fertilizers is not necessary. Due to their association with Frankia, leaves contain high protein levels (Vanden Heuvel, 2002). Cercocarpus montanus vigorously sprouts even after fire (Liang, 2005), and its growth is stimulated by browsing (Turley et al., 2003). Selection of new cultivars that are actinorhizal and drought tolerant can be of great importance either for growing in less fertile soil or for introducing them in low-water landscapes.

Cercocarpus montanus ‘USU-CEMO-001’ was collected as a suspected dwarf plant in Moffat County, CO, on 20 June 2014. This unique, procumbent specimen was discovered laying over a rock on a windy ridge at an elevation of 2708 m (Fig. 2A). The appearance looked different from the typical C. montanus nearby (Fig. 2B). The leaves are smaller and narrower with less serrations compared with the typical plants (Fig. 2C). Healthy cuttings were collected, wrapped in moist newspapers and placed on ice until transferred to a cooler at 4 °C. On 21 June, the terminal cuttings were rinsed in 1% ZeroTol (27.1% hydrogen dioxide, 2.0% peroxyacetic acid, 70.9% inert ingredient; BioSafe Systems, Hartford, CT), wounded by scraping 1 cm of bark from the base of the cutting on one side, treated with 2000 mg·L−1 indole-3-butyric acid (IBA)/1000 mg·L−1 1-napthaleneacetic acid (NAA) as Dip’N Grow (1% IBA, 0.5% NAA, Dip’N Grow, Clackamas, OR) in 25% ethanol following a quick-dip technique (5 s, 1 cm deep). The cuttings were stuck in a rooting substrate containing perlite (Hess perlite, Malad City, ID) and peatmoss (Canadian sphagnum peatmoss; SunGro Horticulture, Agawam, MA) at a volumetric ratio of 4:1. Cuttings were rooted on a bench with an intermittent mist system controlled at 30 vapor pressure deficit units (VPD) using a Water Plus VPD mist controller (Phytotronics, Earth City, MO). Bottom heat at 22 °C was provided using a heating mat (Propagation mat, Grower’s Nursery Supply, Salem, OR) in a single-gable glass greenhouse. Cuttings were also drenched with Aliette fungicide (80% fosetyl aluminium, 6.18% nonylphenol ethoxylate, 4.4% lignosulfonic acid, 0.16% crystalline quartz; Bayer CropScience, Research Triangle, NC) at a rate of 2.5 g per gallon.

Cercocarpus montanus ‘USU-CEMO-001’ was originally collected with an intention of cultivating it as a dwarf cultivar for landscape use. In the landscape, it grew up to an average height of 1.5 m in 4 years (Fig. 3A), whereas the average height of typical alder-leaf mountain mahogany is 3.14 m (Gucker, 2006). This cultivar had persistent leaves throughout the winter over the 4-year period, which is different from typical deciduous alder-leaf mountain mahogany. It can be considered an evergreen cultivar of C. montanus, which makes it one of the rare broadleaf evergreens found in the Intermountain region. Cercocarpus montanus ‘USU-CEMO-001’ has leaves comparatively smaller and narrower than typical deciduous alder-leaf mountain mahogany (Table 1, Fig. 4), but other morphological features are similar. All references to color numbers are from the Royal Horticultural Society and Flower Council of Holland (2001). The color of the adaxial leaf surface of ‘USU-CEMO-001’ is moderate green (135B) to dark green (132A), and the color of the adaxial surface of typical plant leaves is dark green (136A) to strong green (132C). The color of the abaxial leaf surface is moderate yellowish green (136C) and greyish olive green (137B) for ‘USU-CEMO-001’ and typical plant, respectively. Recorded leaf color of adaxial and abaxial surfaces using a Nix Color Sensor (Pro 2; Hamilton, Ontario, Canada) was not much different (Table 1).

Cercocarpus montanus is commonly propagated from seeds (Rupp and Wheaton, 2014). However, off-type plants are produced from seed propagation (Dole and Gibson, 2006). In contrast, vegetative propagation can be beneficial for producing clones with the same traits as mother plant. Vegetative regeneration is possible from root crowns and rhizomes of C. montanus (Gucker, 2006). Multiple vegetative propagation experiments have been conducted using cuttings collected from greenhouse grown stock plants or landscape trial plants.

On 16 June 2015, semihardwood cuttings of C. montanus ‘USU-CEMO-001’ were collected from greenhouse-grown stock plants. Fourteen terminal (7.8 ± 1.4 cm) and eight stem (5.0 ± 0.7 cm) cuttings were prepared using the aforementioned protocol and treated with 1000 mg·L−1 IBA and 500 mg·L−1 NAA as Dip’N Grow in 25% ethanol or 3000 mg·L−1 IBA as talc-based Hormodin 2. All cuttings were stuck in a rooting substrate with perlite and peatmoss at a ratio of 4:1 in a tray (8 cm depth; Landmark Plastic Corporation, Akron, OH) (Fig. 2F). Cuttings were placed on the bench with intermittent mist system set at 20 VPD units and bottom heat at 22 °C. Although the number of experiment units were too small to analyze statistically, the data indicated that the accession has a high potential for rooting (95% rooting at 7 weeks). Further, it also suggested that either hormone treatment or terminal-and-stem treatment is effective (Fig. 2G, data not shown).

On 9 Aug. 2016, terminal cuttings (≈12.5 cm) were collected, wrapped in moist paper towels, and put in a cooler at 4 °C until used. One day later, cuttings were processed and wounded as described earlier, treated with 1000 mg·L−1 IBA and 500 mg·L−1 NAA as Dip’N Grow in 25% ethanol or 3000 mg·L−1 IBA as talc-based Hormodin 2, and stuck in a rooting substrate with perlite and peatmoss at a ratio of 4:1 in a tray. Cuttings were placed on the bench with intermittent mist system set at 30 VPD units and bottom heat at 22 °C. Fungicide Aliette was also applied to control root rot. The experiment was conducted using a completely randomized design. Seven weeks later (i.e., 28 Sept.), the number of roots were counted for each cutting, and the lengths of the longest root (centimeter) were measured. Whether the cuttings rooted or not was recorded at harvest. An analysis of variance was conducted for all data. All statistical analyses were performed with PROC GLIMMIX or PROC MIXED procedures using a Statistical Analysis Software (SAS) university edition (SAS Institute, Cary, NC). There was no significance between the two types of rooting hormones in terms of the rooting percent, number of roots per cutting, and the length of the longest root (Table 2). On average, 50% and 51% of cuttings rooted with 5 and 6.2 roots per cutting and 4.3 and 4.5 cm for the length of the longest root, respectively, when cuttings were treated with 1000 mg·L−1 IBA and 500 mg·L−1 NAA as Dip’N Grow or 3000 mg·L−1 IBA as talc-based Hormodin 2 (Table 2, Fig. 2H).

On 11 July 2019, two propagation experiments were conducted for C. montanus ‘USU-CEMO-001’ using cuttings collected from the trial plants in the landscape (Fig. 3A) in Hyde Park, UT. Healthy cuttings (24 cm) were collected, wrapped in moist paper towel, placed on ice, and transferred to a cooler at 4 °C until used. The first experiment was performed to determine the best part of the stem for cutting propagation. The cuttings were cut into halves with the top part as terminal cuttings (10–12 cm) and the bottom portion as stem cuttings (10–12 cm). Terminal and stem cuttings were wounded (two or three perpendicular cuts to the wood around the base) and quick-dipped in a solution with 3000 mg·L−1 IBA and 1500 mg·L−1 NAA as Dip’N Grow in 25% ethanol and stuck in a rooting substrate with perlite and peatmoss at a ratio of 4:1 in 180-mL inserts (8 cm depth). Cuttings were placed on the bench with intermittent mist system set at 40 VPD units and bottom heat at 23 °C for 8 weeks (Fig. 3B). The experimental design and data analysis method were the same as described earlier. Stem cuttings had greater callus percent and longer roots formed compared with terminal cuttings (Table 3, Fig. 3C and D). On average, 11.1% and 4.8% of the stem and terminal cuttings developed roots, respectively. The number of roots and length of the longest root on stem cuttings were twice as much as terminal cuttings. Stem cuttings tended to be better for propagating C. montanus ‘USU-CEMO-001’. It might be due to higher carbohydrate levels in stem cuttings than terminal cuttings (Dole and Gibson, 2006).

Callus and root formation of stem and terminal cuttings of Cercocarpus montanus ‘USU-CEMO-001’ treated with 3000 mg·L−1 indole-3-butyric acid and 1500 mg·L−1 1-naphthaleneacetic acid as Dip’N Grow. Cuttings were stuck on 11 July 2019.

The second experiment was performed to determine the best rooting hormone and the optimal concentration for cutting propagation. Terminal cuttings (12–14 cm) were wounded (two or three perpendicular cuts to the wood around the base) and treated with plant growth regulators as Dip’N Grow in 25% ethanol and talc-based Hormodin (Table 4). The experimental period, design and data analysis method were the same as the stem and terminal cutting experiment. Although there was no significance among hormone treatments, cuttings treated with Hormodin 2 had the highest rooting percentage (37%) (Table 4). Hormodin 2 treated cuttings produced the highest number of roots (14.5) and the longest root (2.8 cm) compared with cuttings treated with other rooting hormones (Table 4, Fig. 3E and F). On the basis of a hierarchical cluster analysis in a JMP (Version 13.2, SAS Institute) using the percent of rooted cuttings, number of roots per cutting, and the length of the longest root, Hormodin 2 was a better plant growth regulator for C. montanus ‘USU-CEMO-001’ terminal cuttings to form roots. Further research is needed to improve cutting propagation for C. montanus ‘USU-CEMO-001’ to make it a more commercially viable propagation protocol.

Root formation of Cercocarpus montanus ‘USU-CEMO-001’ terminal cuttings treated with different plant growth regulators as liquid-based Dip’N Grow, talc-based Hormodin or a combination of both as treatments. Cuttings were stuck on 11 July 2019.

Cercocarpus montanus ‘USU-CEMO-001’ was originally collected from Diamond Peak, Moffat County, CO. This accession has been registered in the USU Inventor Portal (www.ipso.usu.edu) and approved for disclosure with an Invention ID #D20048. Cercocarpus montanus ‘Coy’ is the cultivar name given to this unique selection. Information about plant material, licensing, and propagation agreements can be obtained from Dr. Larry Rupp (Emeritus Professor) or Dr. Youping Sun (Assistant Professor) at Utah State University (Logan, UT). 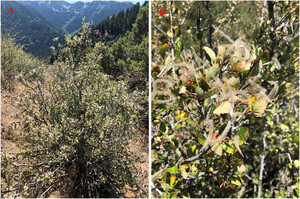 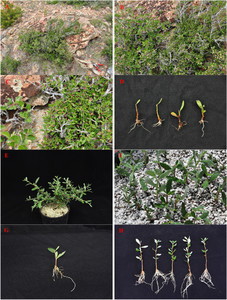 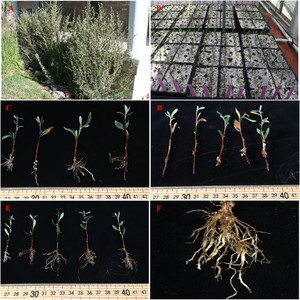 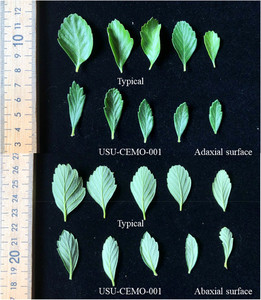