Pennisetum alopecuroides (L.) Spreng. is a perennial warm-season grass native to Asia and Australia that is used mainly as an ornamental in the United States. This species is frequently referred to as “fountain grass,” which can be misleading because a number of Pennisetum species use this common name designation. The Missouri Botanical Gardens (2020) website ‘Pennisetum alopecuroides’ reports that cultivars usually range in height from 0.75 to 1.5 m.

Reduced seed production in vegetatively propagated ornamentals and turfgrass is a desirable trait because it helps maintain the purity of a commercial cultivar. Seed-sterile turfgrasses have been developed by creating triploid interspecific hybrids and by using gamma radiation (Baxter and Schwartz, 2018). Seed set in Miscanthus sinensis Andersson (1855) has been reduced by ploidy manipulation (Ranney and Touchell, 2016) and gamma radiation (Hanna and Schwartz, 2019).

‘Desert Plains’ (Trucks, 2010) and ‘Ginger Love’ (Horvath, 2016) are P. alopecuroides cultivars developed from seedling selections. ‘JS Jommenik’ (Spruyt, 2016) was selected as a shoot mutation. All are vegetatively propagated P. alopecuroides patented cultivars, but none mentions seed production for these cultivars in the patents. Blackman (2011) developed ‘Burgundy Bunny’ from a natural mutation and mentions no seed observed, but this cultivar was not compared to a seed-producing genotype. Hanna and Schwartz (2020) significantly reduced seed production in ‘PralineTM’ (‘Tift H18’) and ‘Hush PuppyTM’ (‘Tift PA5’) with cobalt 60 gamma radiation. Our objective was to use cobalt 60 gamma radiation to reduce seed production in P. alopecuroides genotypes with desirable ornamental characteristics.

Genotypes were evaluated for inflorescence and leaf height, canopy diameter, inflorescence length and number per plant, leaf length and width, and seed set. Data for each variable were subjected to an analysis of variance. Fisher’s least significance differences at P ≤ 0.05 were used for mean separation.

Seeds from plant accession ‘Tift PS1122’, with a mixture of P. alopecuroides ecotypes sent to the United States from China in 1999, were irradiated on 11 Nov. 2010 with 20 Kr of cobalt 60 gamma radiation. Two-hundred thirty plants were planted in the field in Tifton on 29 Mar. 2011. In 2011, eight of the 230 plants grown from the seeds treated with 20-Kr were evaluated and selected based on their morphological desirability and reduced seed set. Open-pollinated seeds (a second generation of seeds) of these eight selected plants were harvested and irradiated with 10 Kr of cobalt 60 on 10 Jan. 2012. One-hundred forty-two plants were established in the field in Tifton in 2012 from three of the eight plants selected in 2011. No plants were established from seed of five of the selections after the second cycle of cobalt 60 radiation on 10 Jan. 2012. Plants grown from irradiated seeds usually have chimeras or sectors for the trait of interest. Therefore, plants with desirable ornamental characteristics were divided into four quadrants: “a” was 3 o’clock and, moving around the plant counterclockwise, “b” was 12 o’clock, “c” was 9 o’clock, and “d” was 6 o’clock; these were transplanted to the field in 2011. As many propagules as possible were sampled from each quadrant, and five or more inflorescences from each quadrant were examined for female fertility. The highly seed-sterile plant 125, sector “a” on plant number 137, and sectors “a,” “c,” and “d” on plant 140 were all selected and asexually propagated to produce ‘Tift PA17’, ‘Tift PA18’, and ‘Tift PA19’, respectively.

‘Tift PA17’ (Supplemental Figs. 1 and 2), ‘Tift PA18’ (Supplemental Figs. 3 and 4), and ‘Tift PA19’ (Supplemental Figs. 5 and 6) were tested in Tifton and Blairsville from 2012 through 2015. Evaluation tests consisted of five and four single plant replications arranged in a randomized complete block experiment in Tifton and Blairsville, respectively. Propagules were rooted and established in the greenhouse 6 weeks before being transplanted to the field on 160-cm centers. Weeds were controlled by both chemical and mechanical methods. Plots were only irrigated at planting to ensure uniform establishment. Other experimental entries were included in each test. Tift PA24 was selected from Tift PS1122 and served as the seed-fertile control with desirable ornamental characteristics (Supplemental Fig. 7). Experiments were established each year and data were obtained from 1-year-old plants, except the 2015 measurements in Blairsville, which were obtained from 2-year-old plants.

Number of inflorescences per plant of four ornamental Pennisetum alopecuroides selections (PA24 is the seed-fertile control) at two locations in Georgia.

Gamma radiation of seeds successfully reduced the seed set in these three selections (Table 7). ‘Tift PA17’, ‘Tift PA18’, and ‘Tift PA19’ produced less seed per inflorescence than Tift PA24 according to all tests (Table 7). The six seeds produced by ‘Tift PA18’ in 2013 in Blairsville were from a semi-fertile sector on one plant in the experiment. Then, this plant was removed from the population. Germination tests were conducted for seeds produced by ‘Tift PA17’, ‘Tift PA18’, ‘Tift PA19’, and Tift PA24 in Blairsville. Seed were stored in manila envelopes for 6 months at room temperature in the threshing shed and then allowed to germinate for 45 d at 27 °C in steam-sterilized soil in the greenhouse. Seed germination tests consisted of 25 seeds from three different plants (replications) harvested in Oct. 2014 in Blairsville. Germination tests were conducted in Apr. 2015 in the greenhouse to allow seeds to experience a dormancy period and simulate field conditions Germination of the few seeds produced by ‘Tift PA17’, ‘Tift PA18’, and ‘Tift PA19’ (Table 7) were 34%, 32%, and 16%, respectively, compared with 93% for Tift PA24, further reducing the seed-producing potential of ‘Tift PA17’, ‘Tift PA18’, and ‘Tift PA19’. Although we have not determined the cause of the reduced seed set in these cultivars, research involving mutagens in our laboratory (unpublished) has shown that cobalt 60 gamma radiation can break chromosomes, thereby resulting in irregular segregation at microsporogenesis and megasporagenesis and pollen and egg cell abortion.

Seed set per inflorescence (planted at two locations) and seed germination (from one location) of four ornamental Pennisetum alopecuroides selections (PA24 is the seed-fertile control) planted in Georgia.

‘Tift PA17’ in landscape (year of establishment) in Blairsville, GA.

‘Tift PA18’ in landscape (year of establishment) in Blairsville, GA. 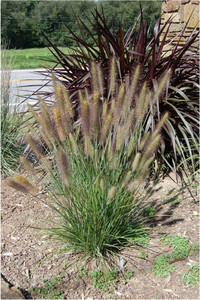 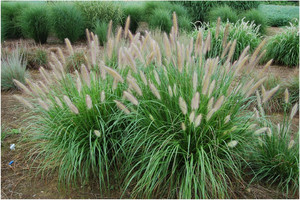 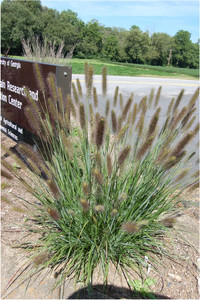 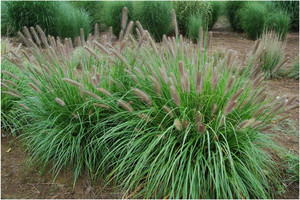 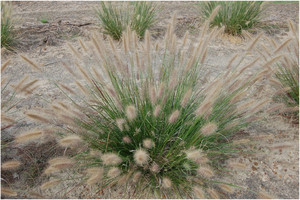 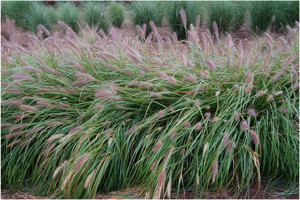 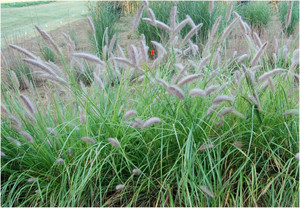