Search for other papers by Linmeng Tian in
Google ScholarClose
, and
Lifang Wu
Lifang Wu

Search for other papers by Lifang Wu in
Google ScholarClose

Strawberry ‘Tokun’ (2n = 10x = 70) is an interspecific hybrid (Fragaria ×ananassa and Fragaria nilgerrensis) with pale yellowish orange fruit and the fruit has aroma components of caramel, coconuts, and peach (Noguchi, 2011), which attracts a lot of consumers. A major drawback of this cultivar is its late maturity, which hampers its extension. Noguchi and Yamada (2015) reported that the harvest of this variety started in February in Japan. We also found a late-harvest start of this variety in the middle of January when cultivated in Central Yunnan, China (lat. 23°19′–27°03′N; elevation, 1700–2300 m). Studies of the unique cultivar Tokun are needed to find practical ways to advance flowering and fruit harvest, which will benefit both growers and consumers.

Intense studies have been done regarding the effects of temperature and photoperiod on flower induction of octoploid strawberries, and SD and night-chilling treatments have been used to induce flowering and promote early fruit production in autumn (Durner, 2015, 2016; Heide and Sønsteby, 2007; Ruan et al., 2011; Serçe and Hancock, 2005; Sønsteby et al., 2009). For ‘Tokun’, SD combined with night-chilling treatments are also found to be effective at inducing flower buds and promoting early fruit production in Japan (Noguchi and Yamada, 2015). Aside from Japan, however, no reports were found regarding regimes to promote ‘Tokun’ flowering and fruiting. Practical techniques to advance flowering and fruiting of ‘Tokun’ should be developed according to the local climate and production systems.

The Central Yunnan area, with its high elevation and low latitude, has the mildest climates in China (Wu et al., 2017). The perpetual spring-like weather provides ideal growth conditions for strawberries (Wang et al., 2018). In this area, 4 weeks of SD treatments in natural summer temperatures is enough for octoploid strawberries ‘Akihime’ and ‘Seolhyang’ to induce flower budding and to harvest in autumn (Ruan et al., 2015). There are no reports of flower bud induction of ‘Tokun’ in the Central Yunnan area regarding SD treatment and N fertilization. Thus, in our study, we investigated the parameters of flowering and fruiting, as well as some morphological traits, of ‘Tokun’ plants conditioned with 5, 6, and 7 weeks of SD treatment supplemented by different timing of N fertilization. A practical regime was developed and recommended to advance flowering and fruiting for decaploid strawberry ‘Tokun’ in the Central Yunnan area.

Plug plants of ‘Tokun’ were used in this experiment for SD and extra N nutrition conditioning. Runner plantlets with two to three leaves were collected on 1 June to 3 June in 2016, 2017, and 2018 from mother plants of ‘Tokun’, that were cultivated in a tabletop substrate culture system as described in previous work (Ruan et al., 2017), at the farm (lat. 24°18'N; elevation, 1760 m) of the National Engineering and Technology Research Center for Ornamental Horticulture located in Yuxi city, Yunnan province. The runner plantlets were put in trays (32 plugs 50 cm in length, 24 cm in width, and 9 cm in height) filled with 80% peatmoss and 20% perlite (by vol.) for rooting, and local standard management practices were adopted. On 11 July, the plugged plants were fully established under natural sunshine conditions and the plants were ready for conditioning.

Trays of ‘Tokun’ were separated randomly into seven groups. Each group included three trays, with 32 plugged plants per tray. Group 1 to group 6 (namely, T1–T6) were conditioned by SD (10 h) and group 7 (namely, T7) was conditioned under the natural sunshine (NS; 13–14 h, varying with season progression) (Table 1). All plants in the seven groups received nutrition treatments as depicted in Table 1. SD treatments started on 24 July and ceased on 27 Aug., 3 Sept., and 10 Sept., resulting, respectively, in 5, 6, and 7 weeks of SD conditioning for each of T1 to T6. T7 plants were also planted on 27 Aug., 3 Sept., and 10 Sept. as control plants for each planting. The SD treatment were carried out in a tunnel-shaped frame covered by black and white polyethylene (PE) film (0.1 mm, Taekwang Company) as described in previous work (Ruan et al., 2011).

Each individual tray plant received 50-mL nutrition solutions on a thrice-weekly basis from 10 July to 26 Aug. There were two nutrition solutions (Table 1). In solution A, 30 g compound fertilizer, ‘SoluFeed’, was dissolved in 100 L water containing N (99.6 mg·L−1), phosphorus (13 mg·L−1), potassium (99.6 mg·L−1), and other middle and trace elements. Solution B was increased with N nutrition by adding 50 g ammonium nitrate to 100 L solution A, resulting in an N content increase to 272.8 mg·L−1. Solution B was used 3 consecutive weeks to increase N nutrition of plants. It started at various weeks before and during the SD period (T1–T5). The control groups T6 and T7 received solution A only (Table 1).

At the end of the SD treatments in 2016, 2017, and 2018, the conditioned plants were planted, respectively, on 27 Aug., 3 Sept., and 10 Sept. (planting times P1, P2, and P3, respectively) in a tabletop substrate culture system for evaluation of flowering and fruiting, along with other morphological traits. Each treatment by planting included four replicates, with eight plants per replicate, and the plants of each replicate for each treatment by planting were planted randomly in the tabletop substrate culture system as described. Plant management after planting was the same as in previous studies (Ruan et al., 2011, 2017).

For each plant, the following data were collected on a thrice-weekly basis: days from transplanting to the emergence (appearance) of the primary inflorescence seen by the naked eye, start date of the first flowering, and start date of the harvest for the 3 years of experiments. The runners and lateral branches were removed from the plants, and their numbers were recorded for 5 weeks after planting on a once-weekly basis. On a twice-weekly basis, individual marketable fruit (>7 g) was harvested and weighed for the plants planted in 2018, and data were collected until 28 Feb. 2019.

Experimental data were subjected to analysis of variance by standard procedures using dps, version 7.05. Duncan’s multiple range test was used to determine significant differences among the results. A P value of ≤0.05 was considered significant.

Flowering and fruiting of ‘Tokun’ plants for three seasons. 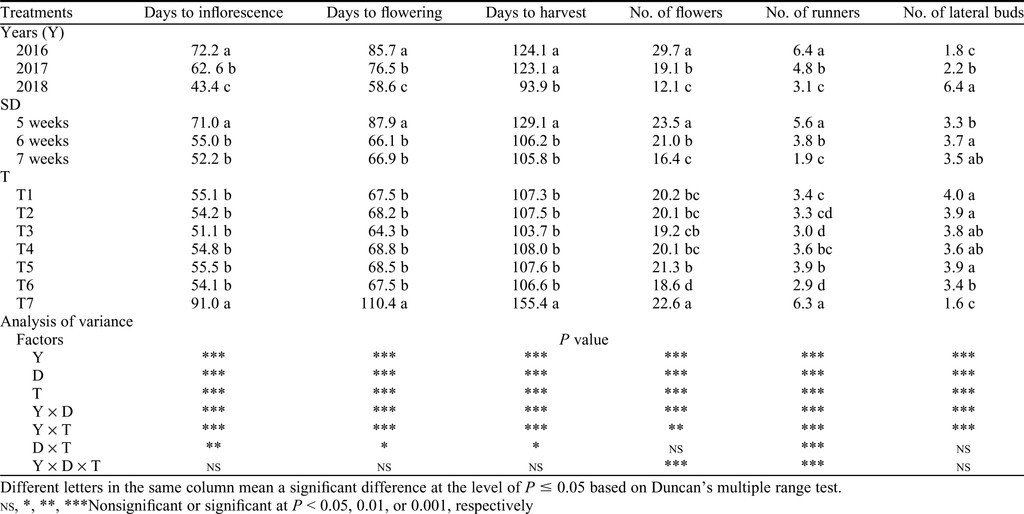 In consideration of the duration of SD treatments, 6 or 7 weeks advanced flowering and fruiting significantly compared with 5 weeks. For plants treated with 5 weeks of SD, days to inflorescence emergence, flowering, and harvest of the first fruit from 27 Aug. were 71.0, 87.9, and 129.1 d, respectively, which is ≈20 d more than those data for SD plants treated for 6 and 7 weeks (Table 2), even though these plants were planted 1 and 2 weeks later. However, the longer duration of the SD treatments decreased significantly the flower number of the primary inflorescence from 23.5 at 5 weeks to 21.0 at 6 weeks to 16.4 at 7 weeks.

In consideration of N nutrition, extra N nutrition only increased significantly flower number of primary inflorescence from 18.6 (T6) to a range of 19.2 (T3) to 21.3 (T5). For different N fertilization timings (T1–T5), no significant differences were detected for any flowering or fruiting date.

Fruit yield of ‘Tokun’ plants for the 2018 season. 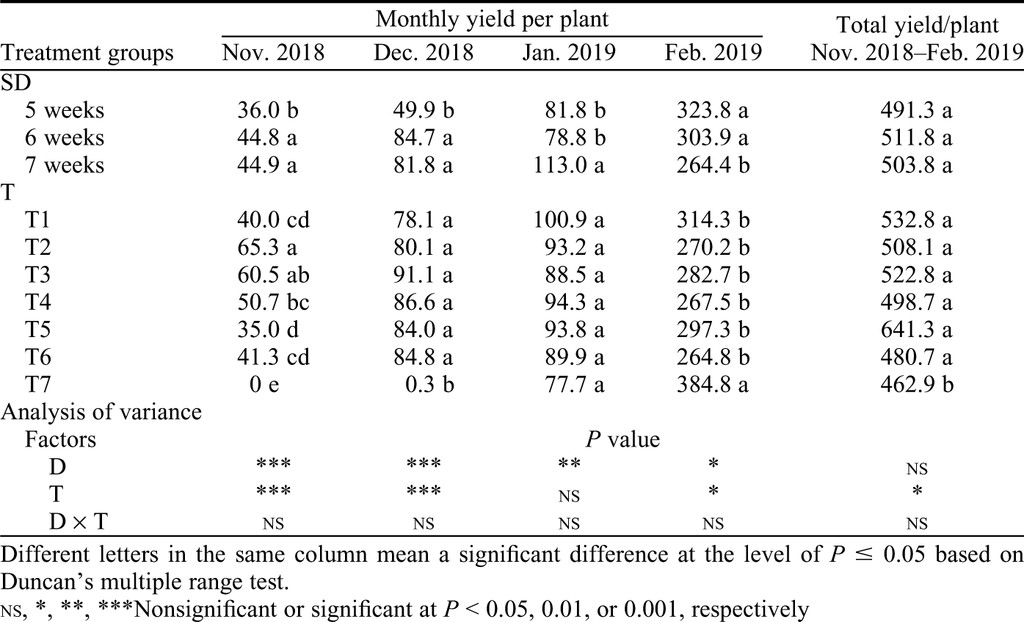 With regard to N nutrition, only yields in November were significantly different among the T1 through T6 treatments.

Number of runners and lateral branches of ‘Tokun’ plants for three seasons.

Among the 3 experiment years, the number of runners and lateral branches varied significantly (Table 2, Fig. 1).

For decaploid strawberries, only one study—by Noguchi and Yamada (2015)—reported that an 8-h SD treatment supplemented with 12 °C night chilling during August and September in Japan could promote flowering and realize a 33-d earlier fruit harvest, advancing the start of fruit harvest from February to January. In our study, we demonstrated that 6 to 7 weeks of a 10-h SD treatment without temperature manipulation in July and August in Central Yunnan, promoted flowering and realized a 2-month earlier fruit harvest, advancing from January to November. Around 200 g/plant of fruit yield in November and December, from the conditioned plants, markedly increased the grower’s income and satisfied consumer demand for this peach-like-tasting strawberry.

Temperature and daylength are main factors influencing flower initiation, and SD and/or lower temperature treatments are commonly used to promote flowering and fruiting for octoploid strawberries (Durner, 2015, 2016; Heide and Sønsteby, 2007; Heide et al., 2013; Ruan et al., 2011; Serçe and Hancock, 2005; Sønsteby et al., 2009). In Central Yunnan, which is characterized by perpetual spring-like weather (Wu et al., 2017), Ruan et al. (2015) reported that 4 weeks of a 10-h SD treatment could make octoploid strawberries such as ‘Akihime’ and ‘Seolhyang’ initiate early flowering and realize a fruit harvest in the middle of October. Because of the cool summer temperatures in Central Yunnan (Wu et al., 2017), just the SD treatment, in natural temperatures, promotes flowering and fruiting of ‘Tokun’, which is more convenient and effective compared with the reported methods of Noguchi and Yamada (2015) in Japan.

In terms of duration of SD treatment, 3 to 4 weeks of SD treatment was enough for flower induction of octoploid strawberries such as ‘Korona’, ‘Akihime’, and ‘Seolhyang’ (Ruan et al., 2011, 2015; Verheul et al., 2006). For the decaploid strawberry ‘Tokun’, which starts to flower in late December in Central Yunnan, which is 2 months later than ‘Akihime’, we demonstrated that 2 to 3 weeks more of the SD treatment is needed for flower induction, compared with the SD duration needed for ‘Akihime’ in Central Yunnan.

Number of runners and lateral branches.

During the 3 years of the experiment, a consistent trend was noted: 6 to 7 weeks of SD treatment promoted the precocity of plants, indicated by days to inflorescence, days to flowering, days to harvest; reduced the number of flowers in primary inflorescence and the number of runners; and increased the number of lateral branches. The varying data for each parameter among years might be attributed to the varying sunshine, temperature, and other factors in different years.

In Central Yunnan, 6 to 7 weeks of SD treatment in natural temperatures is required to advance flowering and fruiting of the decaploid strawberry ‘Tokun’ and to realize a fruit yield of ≈200 g/plant in November and December. Six to 7 weeks of SD treatment also reduced significantly the number of runners and increased the number of lateral branches of the strawberry ‘Tokun’. 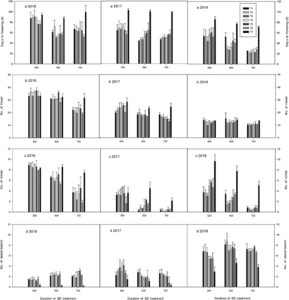 Search for other papers by Linmeng Tian in
Google ScholarClose
, and
Lifang Wu
Lifang Wu

Search for other papers by Lifang Wu in
Google ScholarClose