Iris, with its showy and colorful flowers, is one of the most popular ornamental plants worldwide, and is commonly grown in gardens and used as a cut flower. As the largest genus in the family Iridaceae, Iris comprises about 280 species (Goldblatt and Manning, 2008). There are ≈70,000 known Iris cultivars, and more than 1000 new cultivars are produced by selection and hybridization every year (Hu and Xiao, 2012). Few of those cultivars bloom in early spring (late March to mid-April in the eastern China). According to the taxonomic system of Mathew (1981), Iris japonica Thunb. belongs to the subgenus Limniris section Lophiris Tausch, also known as crested irises or evansia irises. I. japonica is native to southern China and Japan where it blooms in early spring (Zhao et al., 2000). It is given the common name Butterfly Iris because the flower resembles a dancing butterfly. It is a traditional plant that has been cultivated in Chinese gardens since the Song Dynasty and is alluded to in many old poems (Hu and Xiao, 2012). It is hardy to between U.S. Department of Agriculture Zones 7 to 10 and can tolerate weak light conditions as well as wet and hot environments.

Selecting novel individuals from natural populations is an important way to acquire new iris cultivars. A series of early-spring-flowering ornamental Iris cultivars were selected from plants of I. japonica in 2017. These cultivars have attractive evergreen leaves and produce abundant colorful flowers from late March to mid-April in Shanghai City, eastern China.

This series of ornamental iris cultivar was selected from strains of cultivated populations of I. japonica conserved at the Shanghai Botanical Garden. These plants were originally collected from the Shenlong Mountains of Hubei Province and the Zhangjiajie Mountains of Hunan Province. There is high intraspecies diversity in I. japonica, including variations in flower color, flower size, color pattern, and stem color. Four cultivars of I. japonica were evaluated with special ornamental characteristics and officially authorized to release as ‘Butterfly Dreams’ (‘Mengdie’), ‘Butterfly Dawn’ (‘Xiaodie’), ‘Butterflies in Bloom’ (‘Huadie’), and ‘Butterfly Veil’ (‘Dieyi’) by the American Iris Society in 2019.

The selection process was conducted at the Conservation Nursery of the Shanghai Botanical Garden in Shanghai, China. For each of the four new cultivars, 30 clones were planted (4 cultivars × 30 clones) in Sept. 2016. The plants were grown in arrays with 30 cm between plants in the experimental field; they were irrigated and fertilized similarly to other perennial herbs. All plants were grown at a forest edge where they received half full-sunlight. Morphological characteristics including plant height, leaf length and width, flower color, flower diameter, inner perianth length and width, outer perianth length and width, and the flowering period of the total population. Single flowers were evaluated for a randomized sample of 15 plants per cultivar. Leaf length and width were measured on the third leaf from the top of each plant. Flower color was described according to the Royal Horticultural Society (RHS) Color Charts. The quantitative indexes of flower were measured on the second day of full bloom. Flowering period was recorded according to the dates of the first flower and the last in the population of each cultivar. The data were analyzed by SPSS 17.0 (SPSS Inc., Chicago, IL).

In Shanghai City, most irises bloom from mid-spring (late April) to early summer (June), and the leaves are winter deciduous. In contrast, the four I. japonica cultivars bloom in late March to mid-April and have evergreen leaves.

The height of the four new cultivars of I. japonica ranged from 39.33 ± 2.08 cm to 76.50 ± 3.50 cm in our trial (Table 1). Their stems were found to be strong, straight, and upright. In contrast, the stems of common I. japonica varieties are untidy and messy. The four cultivars produced different numbers of inflorescence branches, with flower numbers ranging from 24 to 68 per plant in our trial.

Morphological characteristics and flower periods of four new cultivars of I. japonica.

The four new cultivars of I. japonica produce flowers with colors and patterns that differ from those of common I. japonica varieties, which produce white or pale purple flowers. Meanwhile, with 3 years of observation, the traits of four new cultivars (e.g., flower color and flower pattern) were stabile because they were selected from asexual stains in 2017.

Flower colors of four cultivars of I. japonica.

Each flower of these four cultivars can bloom for 2 to 3 d. Flowers open consecutively over the course of up to 3 weeks. These new cultivars are well adapted to a half-shade environment, whereas most irises thrive in full sunlight. They have been sufficiently free of pests and disease since they were grown at the Shanghai Botanical Garden in 2015. The four cultivars have evergreen, sword-like leaves, and thus their ornamental period is longer than that of most Iris cultivars.

In summary, we described four new cultivars of I. japonica that produce lovely medium-sized flowers for a long period in early spring and retain evergreen leaves. They are excellent choices as cover plants near or in forests, and they can be used as cut flowers. They can also be used to hybridize with different populations of I. japonica or other related species to obtain new colorful crested irises.

The four cultivars of I. japonica, Butterfly Dreams, Butterfly Dawn, Butterflies in Bloom, and Butterfly Veil, are available for research or trials. Requests for samples of cloned plants may be addressed to Dr. Yue-E Xiao (e-mail: xiaoyuee@shbg.org), Research Center of Shanghai Botanical Garden, Shanghai, China. 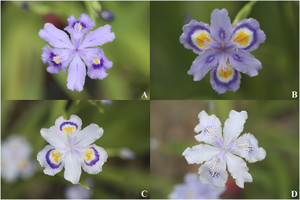