Caladiums (Caladium ×hortulanum Birdsey, Araceae Juss.) are often grown in containers or planted in the landscape as accent and border plants (Deng, 2018; Evans et al., 1992). They are valued for their variable-shaped, bright foliage. The majority of commercial caladium plants sold at retail are produced by forcing tubers in containers. Florida field growers produce essentially all the caladium tubers used in the United States and some 40 countries in the world for the production of pot plants and direct planting in the landscapes. Commercial caladium cultivars are often grouped into eight categories based on their leaf type and impact color [fancy white, red, pink, and novelty, and lance (or strap) white, red, pink, and novelty] (Bell et al., 1998). One of the cultivars in the fancy novelty group is ‘Miss Muffet’. The leaves of this cultivar are characterized by a yellow (lemon or chartreuse) leaf background color, white main veins, and numerous burgundy spots. It ranked 40th among caladium cultivars grown by the Florida caladium industry in 1979 (Wilfret and Hurner, 1982). In the past 2 decades, this cultivar gained popularity. It ranked 19th in 2003 (Deng et al., 2008b), 16th in 2008, and 13th in 2013 (Z. Deng, unpublished data). The acreage in Florida planted for ‘Miss Muffet’ tuber production has been between 22 and 26 acres (Deng et al., 2008b; Z. Deng, unpublished data).

Description of color for plant parts was based on comparison with the Royal Horticultural Society Color Chart [Royal Horticultural Society (RHS), 1986]. Plants used for color descriptions were grown from de-eyed, Jumbo-sized (or equivalent) tubers (two per container) in 20.3-cm containers in a shaded greenhouse with ≈30% light exclusion. The containers were filled with the commercial potting mix Fafard 3B Mix/Metro-Mix 830 Mix (Sun Gro Horticulture Inc., Agawam, MA) amended with the commercial controlled-release fertilizer Osmocote (15N–3.9P–10K, 5 to 6 months; Scotts Co., Marysville, OH) at the rate of 4.3 kg·m−3.

Plants of ‘Sea Foam Pink’ are ≈43 cm tall and 63 cm wide and have upright, outwardly arching leaves. Mature leaves have an average size of 31 cm (length) × 20 cm (width). Leaves are peltate, sagittate-cordate, with yellow-green (RHS 144A and 144B) to green (RHS 143C) palmate-pinnate venation. The upper surface is yellow-green (RHS 144B), with a narrow margin bordering the entire leaf; the basal leaf valley and the basal notch at the end of the valley are red-purple (RHS 60A). Primary veins are yellow-green (RHS 144B). Red-purple (RHS 59C and 59D) blotches, of variable sizes, are located between primary veins. Occasionally some small dark green (RHS 137A or 139A) blotches and small white (RHS 155D) spots may appear on the leaf surface. The abaxial surface is grayed-green (RHS 191A), with grayed-green (RHS 194D and 195D) mid and primary veins. Grayed-purple blotches (RHS 186B) are scattered between primary veins. Mature petioles are 4 to 8 mm in diameter and red (RHS 49A) near the top, and 8 to 14 mm in diameter and brown (RHS 200A) near the base. Grayed-red (RHS 182A) streaks run throughout the petioles. Tuber surfaces are brown (RHS 200A and 200B), with the cortical area in yellow (RHS 6B or 6C).

In both seasons, field plots were arranged in a randomized complete block design with three replicates. The plot size was 1.2 m2 and was planted with 30 caladium propagules (tuber pieces). The commercial cultivar ‘Miss Muffet’, the paternal parent of and the commercial cultivar most similar to ‘Sea Foam Pink’, was included in the field as a check to assess the tuber yield and plant performance of ‘Sea Foam Pink’. In the 2015 season, ‘Gingerland’ was also included in the trial. Analysis of variance was conducted using the JMP Pro 12 program, followed by means comparisons using the Tukey-Kramer HSD test (SAS Institute, Inc., Cary, NC, 2016).

Tuber weight, marketable number, production index, and grade distribution of ‘Sea Foam Pink’, ‘Miss Muffet’, and ‘Gingerland’ (checks) caladiums in experimental field plots in 2015 and 2017. Values presented are means of three plots with 30 propagules planted in a plot of 1.2 m2.

The suitability of ‘Sea Foam Pink’ for container plant production was evaluated by forcing tubers in 11.4-cm containers (diameter) in Spring 2018 following the protocol of Harbaugh and Tjia (1985). Number 1-sized tubers were planted on 2 May in the commercial potting mix Fafard 3B Mix/Metro-Mix 830 Mix (Sun Gro Horticulture) amended with Osmocote fertilizer (15N–3.9P–10K, 5 to 6 months) at 4.3 kg·m−3; plants were grown in a greenhouse with ≈30% light exclusion. Temperatures in the greenhouse ranged from 25 °C (night) to 33 °C (day). Potted plants were arranged on metal benches, with a pot-to-pot spacing of 0.4 m, in the greenhouse in a randomized complete block design with six replicates. Plant height, plant width, number of leaves, and foliar characteristics were recorded in early July 2018, ≈8 weeks after planting. Quality of the potted caladium plants was rated on a scale of 1 to 5, with 1 = very poor, unattractive, totally unacceptable as potted plants with few leaves, and 5 = very attractive, full plants with a symmetrical shape, an appropriate height, and many bright, colorful leaves. Two commercial cultivars (‘Miss Muffet’ and ‘Gingerland’) were included as checks in the container trial. ANOVA and mean comparisons were conducted as described above.

Plant height (cm) and width (cm), leaf number, length (cm) and width (cm), number of blooms (inflorescences), and plant quality of ‘Sea Foam Pink’, ‘Miss Muffet’, and ‘Gingerland’ (checks) caladiums grown in small containers. No. 1 tubers were planted in 11.4-cm containers (one tuber per container) and grown in a shaded glasshouse in Balm, FL, in 2018. Values represent the means of six plants produced from intact or de-eyed No. 1 (3.8 to 6.4 cm in diameter) tubers planted individually per container.

‘Sea Foam Pink’ was evaluated in 2015 and 2017 in the same field plots used for evaluating tuber production for plant growth, leaf color display, and sunburn tolerance. Growing conditions are described in the preceding section. A scale of 1 to 5 was used for rating plant growth, with 1 being very poor (few leaves and lack of vigor) and 5 being excellent (full plants, numerous leaves). A scale of 1 to 5 was also used for rating leaf color display, with 1 being very poor (dull or bleached, lack of color display) and 5 being excellent (bright, very attractive). Sunburn tolerance was evaluated on a scale of 1 to 5, with 1 being very susceptible to sunburn (leaves having numerous sun-damaged areas or holes) and 5 being resistant to sunburn (no visible sun-damaged areas). Evaluations of plant growth, leaf color, and sunburn tolerance were done on 13 Aug., 4 Sept., and 15 Oct. 2015, and 25 Aug. and 13 Oct. 2017.

Sunburn tolerance rating of ‘Sea Foam Pink’ caladium and commercial cultivars ‘Miss Muffet’ and ‘Gingerland’ grown from 2.5-cm tuber propagules in ground beds in full sun in Balm, FL, in 2015 and 2017. Values presented are means of three plots based on whole plot evaluation in each evaluation.

Two garden trials, one in full sun and one under shade, were conducted in Summer 2018 to compare plant performance of ‘Sea Foam Pink’ with ‘Miss Muffet’. Garden beds were mulched with black landscape cover. Two drip tapes were laid below the landscape cover to provide irrigation. For each cultivar, four Jumbo-sized intact tubers (6.4 to 8.9 cm in diameter) were planted into the beds on 12 June 2018, with a spacing of ≈1 m. Fifteen grams of the controlled release fertilizer Osmocote (15N–3.9P–10K, 5 to 6 months) were applied to each plant on 23 July. ‘Miss Muffet’ was included in the trials as a check. Data were taken on plant height, width, leaf number, leaf length and width on 23 July (≈6 weeks postplanting) and again on 21 Aug. (≈10 weeks postplanting and 4 weeks after fertilization). Plants were rated on a scale of 1 to 5 for plant growth and leaf color display, as described earlier.

Plant size, growth rating, and leaf size and color display rating of ‘Sea Foam Pink’ and ‘Miss Muffet’ caladiums in sun and shade trials in Balm, FL, in 2018. Data were taken 6 and 10 weeks after Jumbo-sized tubers were planted in the ground beds in full sun or inside a screenhouse (≈30% light exclusion). Values presented are mean values of four plants.

In general, caladium plants grow more quickly, become larger, display brighter colors, and produce larger leaves in shady gardens than in sunny gardens. This is true with ‘Sea Foam Pink’. Its plants in the shady garden beds were 41% to 52% taller and 55% to 71% wider and produced 54% to 71% more leaves. Its leaves were ≈40% longer and wider than those in the full sun trial (Table 5). ‘Sea Foam Pink’ plants in the shade trial also received higher plant growth and leaf color display ratings than those in the sun trial.

‘Sea Foam Pink’ is characterized by a unique combination of leaf characteristics, yellow leaf background color and pink blotches, making it a unique new addition to the fancy novelty caladium cultivar group. Its tuber yield potential and grade distribution are expected to be similar to those of ‘Miss Muffet’. Considering its possible susceptibility to Pythium root rot and Fusarium tuber rot, disease management will be important for growing of ‘Sea Foam Pink’ in caladium fields for production of caladium tubers. Standard postharvest treatments are recommended for newly harvested tubers (Harbaugh and Tjia, 1985), and preplant hot-water treatment of seed tubers (Rhodes, 1964) is also strongly encouraged.

‘Sea Foam Pink’ was released under the name ‘UF-R1409’. Commercial production of this cultivar is required to have a licensing agreement with the Florida Foundation Seed Producers, Inc., P.O. Box 309, Greenwood, FL 32443. Information on tuber availability and licensing agreements can be obtained from the Florida Foundation Seed Producers, Inc. (http://www.ffsp.net/). 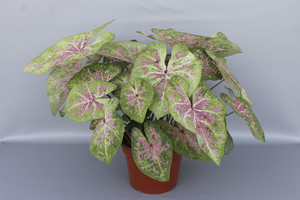 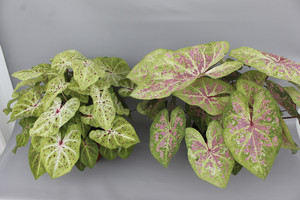 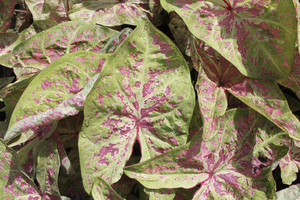