‘Taichung No. 6’: A Bush Common Bean Cultivar for Frozen Processing

The common bean (Phaseolus vulgaris L.; 2n = 2x = 22), one of the most important legume crops that originated in southern Mexico to Central America, is cultivated in tropical, subtropical, and temperate regions. It is produced mainly for dry beans (seeds harvested at full maturity), shell beans (seeds harvested at physiologic maturity), and green or snap beans (pod harvested before seed development), all of which are eaten fresh, canned, or frozen (Gepts, 1998).

Depending on growth and twining habit, the common bean is classified into two groups: bush and pole. Three genes, L/l (long stem/short stem), A/a (indeterminate growth/determinate growth), and T/t (twining/nontwining), govern stem growth (Miklas and Singh, 2007). A bush bean plant generally grows to a height of less than 60 cm and reaches harvest maturity in a relatively short period. Thus, its harvest can be mechanized easily with low labor input, and it can fit into a niche of a short growing period of 2 to 3 months for concentrated production. Nevertheless, this can afford relatively little competition to their companion crops (Hyman et al., 2008).

The objectives for common bean breeding focus primarily on improving yield, quality, environmental adaptability, and profitability (Singh and Singh, 2015). In response to the demands of the frozen vegetable market, bush cultivars for food processing must have greater yield and include pod traits fit for frozen quality. These specific characteristics of pods for frozen processing especially for Japan’s export market are dark-green color, straight, stringless, a diameter of 7 to 9 mm, and a high sugar content. In addition, it needs a more upright plant architecture to offering cultivation advantages, such as ease of crop management (particularly in mechanical operations), reduction of pod loss at harvest with better quality, and lower incidence of disease by facilitating air circulation (Pires et al., 2014).

The greatest difficulty in obtaining new cultivars with these target traits is the large number of controlled genes involved and the effect of the environment on their expression. The general principle for cultivar preparation is using recurrent selection; however, this process is time-consuming when evaluating and recombining progeny selection (Hallauer et al., 2010). Alternative selection systems, pure-line and mass selection, which have shown efficiency in autogamous crops, were suggested for high heritable traits (Allard, 1960).

The Taichung District Agricultural Research and Extension Station (TDARES) announced the release of the ‘Taichung No. 6’ common bean—an open-pollinated bush-type cultivar for frozen pod production. This cultivar was developed using a series of pure-line and mass selections, and then was evaluated for field performance. The ‘Taichung No. 6’ common bean has an upright shoot, vigorous branching, and a high pod setting with excellent pod quality. It can be sown from September to February in tropical Taiwan.

All breeding, selection, and performance studies were conducted in field conditions in TDARES (lat. 24°08′N, long. 120°32′E) starting in 2013. The experiment was arranged within different germplasms in a completely randomized design with three replicates in each accession. Plants were planted in double rows, spaced 45 cm apart, with 10-cm spacing within rows. Fifty plants were planted and 10 plants were sampled randomly for analysis in each replicate. SAS software version 8.2 (SAS Institute Inc., Cary, NC) was used to analyze the data, and the least significant difference test was used to compare accessions when the analysis of variance results showed significant differences between means at P ≤ 0.05.

Thirty-six bush common bean germplasms, including commercial cultivars and breeding lines collected from the Netherlands, Italy, France, the United States, Japan, and Taiwan, were evaluated for their potential as frozen processing cultivars and were cultivated from October to November in 2013 and 2014 (average temperature, 23.6 and 25.8 °C; maximum temperature, 28.6 and 32.9 °C; daylength, 11 h). Horticultural characteristics included plant height, uprightness measured by the angle between the ground and the main stem, days to flowering (DTF), days to harvest (DTH), and yield per square meter. Pod quality [length, diameter, total soluble solid content (TSSC), crude fiber content (CFC), and color before and after boiling-water blanching for 2 min] was recorded. TSSC was measured by a digital refractometer (ATAGO PR-101, Tokyo, Japan) and CFC was analyzed according to Kitcherside et al. (2000). Color ratings were made based on a 1 to 5 scale, in which 1 = light green and 5 = dark green.

Eight cultivars of those 36 germplasms had traits that fit the breeding goal. Among them, commercial cultivars Sonnet (Sakata Seed Co., Ltd., Japan), with strong branching and superior yield, and Vivid (Taiwan Association of Frozen Vegetable and Fruit Manufacturers, Taiwan), with upright shoots and dark green pods, were selected as female and male parents, respectively. Three elite plants of cultivars Sonnet and Vivid were then crossed using bud pollination in Nov. 2014. From 2015 to 2016, pure-line selection was applied at the F2–F4 generations, followed by mass selection at the F5–F7 generations. Each progeny population size was ≈100 to 150 plants, and three to five superior plants were selected. Their seeds were subsequently collected individually during pure-line selection, or together during mass selection.

A comparative test for elite lines was then performed from Feb. to Mar. and Oct. to Nov. 2017. Line 2017DCB-13 was selected based on its overall field performance and pod traits. Seed production and distinctness, uniformity, and stability testing were conducted from Jan. to Mar. 2018. Based on the results of trait performance from the cropping, 2017DCB-17 was named the new common bean cultivar ‘Taichung No. 6’ after evaluation.

Bush common bean ‘Taichung No. 6’ demonstrated determinate growth, dwarf shoots, strong branching, and upstanding stems with a 58-cm plant height (Fig. 1A). It blossomed 35 d after sowing. The first inflorescence was located in the third node, ≈16 cm aboveground. On average, each inflorescence had six flowers with a 1.5-cm pedicel. DTH was 55 d in summer and 65 d in winter. Its fresh pod is straight and stringless. The pod length, diameter, and weight were 13.1 cm, 0.8 cm, and 4.6 g, respectively. The pod epidermis was dark green and smooth (Fig. 1B). It had a slightly sweet taste with a high sugar content at 6.0 °Brix. The plants showed vigorous, stable, and uniform performance in the field during the cropping season (Fig. 1C). In addition, the seed was white and kidney shaped, with 100 seeds weighing 24.2 g.

Compared with the control cultivars—female parent Vivid and male parent Sonnet—‘Taichung No. 6’ had more erect shoots and superior branching (Fig. 2A) as well as uniform maturity and dark-green pods (Fig. 2B). It had significantly greater shoot height, shorter DTF and DTH, and greater pod yield. The yield of ‘Taichung No. 6’ was 7.4 kg·m–2, whereas that of ‘Vivid’ and ‘Sonnet’ were 6.8 and 6.1 kg·m–2, respectively (Table 1). Pod traits, such as length, diameter, and weight, did not differ between the control cultivars. However, ‘Taichung No. 6’ had a darker green color not only in fresh, but also in blanched pods. It also had better taste quality, greater TSSC (6.0 °Brix), and less CFC (10.6%) (Table 2).

There appears to be significant transgressive segregation for several traits, including plant height, DTF, DTH, yield, and fresh pod color. It is suggested that hybridization followed by pure-line and mass selection based on the traits required by frozen processing is an optimal method for bush common bean breeding.

The optimal mean temperature for the common bean is 20 to 25 °C. A high temperature during the flowering stage leads to abscission of flowers and a low pod set, thus resulting in yield loss. Daytime temperatures of less than 20 °C delay maturity and cause the development of empty mature pods (Alghamdi and Ali, 2004). To determine the optimal sowing season for new common bean cultivars, the seeds of ‘Taichung No. 6’ and control cultivars were sown on 28 Sept. 2017, 28 Dec. 2017, and 28 Mar. 2018. For each 2-month cropping, the average temperature was 24.4, 16.2, and 27.7 °C, respectively; the maximum temperature was 33.9, 29.3, and 33.2 °C, respectively.

Different sowing seasons demonstrated significant effects in common bean plant performance as well as pod quality. ‘Taichung No. 6’ sown on 28 Sept. had a shorter DTF (30.5 d) and DTH (56.1 d), and a greater harvested pod number (27.6 pods/plant). Low temperatures in winter (December–February) led to retarded plant growth, shorter plant height, and a longer growth period. Nevertheless, pod set did not differ between fall (September–November) and winter (December–February) cropping. However, pod set decreased when sown from 28 Mar., which resulted in great reductions in pod numbers/plant and yield (Table 3). Increasing temperatures during the reproductive stage caused sterility and abortion of flowers, thus affecting plant productivity. Yaacov and Kigel (1994) concluded that the lower pod and seed set of the common bean induced by heat is a combined result of both lower pollen viability and impaired female performance in a large proportion of flowers.

Effect of sowing day on plant growth of bush common bean ‘Taichung No. 6’.

Pod length, diameter, and weight; TSSC; and CFC of the bush common bean ‘Taichung No. 6’ did not differ between the sowings in September and December, because plants sown on Mar. 28 and harvested at the end of May experienced increased temperatures during the reproductive stage. They had poor-quality pods, with shorter pods wider than 7 to 9 mm and a worse taste caused by lower TSSC and higher CFC. Thus, they were not considered for frozen food processing (Table 4).

Effect of sowing day on pod traits of bush common bean ‘Taichung No. 6’.

Bush common bean ‘Taichung No. 6’ was selected for use for fresh pods or frozen vegetables. Furthermore, it can be produced in subtropical and tropical regions. Through machine sowing, 8 to 10 kg of seed can be sown per hectare of land. The seeds can be sown in double rows spaced 45 cm apart, with a plant spacing of 7 to 10 cm within rows. In the lower land of tropical Taiwan, it is planted optimally from September to the following February. To prevent poor fruit set and quality, cultivation in the warmer summer months from May to August is not suggested.

A Taiwan Plant Breeder’s Right of bush common bean ‘Taichung No. 6’ was granted by the Council of Agriculture, Executive Yuan, Taiwan, ROC, in 2019. A limited amount of seeds may be available for research purposes from TDARES by sending a request to the first author (chenwl@tdais.gov.tw) with a signed material transfer agreement.

Comparison of plant and pod performance of bush common bean ‘Taichung No. 6’ with control cultivars Vivid and Sonnet. ‘Taichung No. 6’ is more erect and has superior branching (A) as well as uniform maturity and dark green pods (B). 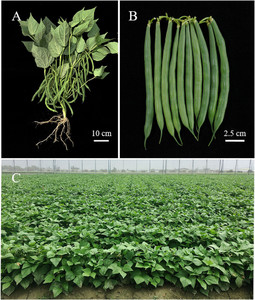 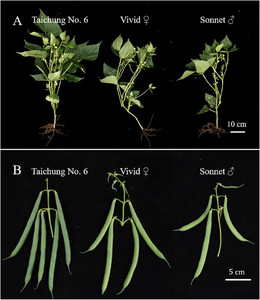