Crabapples (Malus spp.) are small trees and shrubs in the rose family, and are valued for their charming flowers (single, semidouble, and double forms in shades of purple, red, pink, white); colorful, small fruits (≤5 cm; primarily purple, red, pink, orange, yellow, and green); and diverse growth habits (columnar, fastigiate, upright, spreading, drooping, weeping) (UPOV, 2003; Wyman, 1955). As a result of these desirable attributes, their rich cultural heritage, and wide environmental adaptability, crabapples have been widely cultivated in China’s landscape and gardens, and are popular worldwide. Although nearly 1200 crabapple cultivars are recorded in Fiala’s Flowering Crabapples (Fiala, 1994), less than 5% are semidouble or double flowered, such as the outstanding ‘Brandywine’ (rose type, double flowered), ‘Van Eseltine’ (pink doubles), ‘Kelsey’ (red doubles), and ‘Diamond’ (red-purple doubles), resulting in a scarcity of double-flowered cultivars available in today’s market. Phenotypic diversity plays an important role in plant breeding and selection (Endress, 2011; Kumari et al., 2016; Santos et al., 2011). It is of great importance to breed new crabapple cultivars with multiple layers of petals and novel flower shapes. Crabapple breeding is an active endeavor worldwide, with increasing efforts dedicated toward the rare double-flowered germplasm. During the 20th century, breeding of ornamental crabapples was carried out mainly in Canada and the United States, where ≈400 to 600 different forms and cultivars were grown (Dirr, 2010). However, for the past 20 years, only two new double-flowered crabapple cultivars—Spring Bride (Spongberg, 1996) and Jarmin (Jarmin, 2003)—have been documented in the U.S. market.

Malus ‘Fen Balei’ was selected and released from the Nanjing Forestry University’s crabapple breeding program. This cultivar has gained much attention for its plump buds; double, light-purple flowers with a diameter of 5.5 cm; and deep, cup-shaped collora. It also has an added advantage of being relatively resistant to pests and diseases. We report the development and selection of the 'Fen Balei' crabapple cultivar.

In Fall 2007, seeds of M. micromalus were collected from Jiangsu, Henan, Shandong, and Beijing, China. To break seed dormancy, seeds were placed in moist sand and were stored at in a low temperature (–5 to –10 °C) until germination. In Spring 2008, seeds were sown in a seedbed (width, 1.5 m; length, 50 m; depth, 8.0–10.0 cm). After germination, seedlings were transplanted into the field with a 10.0 × 10.0-cm spacing. In 2011, an individual plant with plump buds, which opened with large, double, deep, cup-shaped light-purple flowers, was observed and selected for further evaluation. From 2012 to 2014, successive observations were conducted to assess the phenotypic stability of this individual, which was named ‘Fen Balei’ (Fig. 1). Between 2011 and 2015, three generations of ‘Fen Balei’ bud-grafted seedlings with M. hupehensis seedlings as rootstock were propagated, resulting in more than 300 individual plants. In Spring 2013, all flowering budded plants produced the same blossom type, confirming the phenotypic characteristics of ‘Fen Balei’. It is worth noting that all the bud-grafted seedlings grew vigorously, exhibited good adaptation to high temperatures, and had few incidents of pests and diseases.

Comparison of phenotypic attributes of M. micromalus and ‘Fen Balei’.

The grafted tree has reddish brown branches; an upright, V-shaped growth habit; and reaches ≈2 m in height with a 1.2-m spread at 6 years old (Fig. 1A).

The flowering time (10% open flowers) of ‘Fen Balei’ is mid spring (≈7 Apr. in Jiangsu, China). It has an umbellate inflorescence, plump buds (1.6–2.0 cm) (Fig. 1B), and large-diameter flowers (≈5.5 cm) that are highly doubled (14–22 petals) with a deep cup shape and with numerous pistils (≈20) and stamens (≈45). Petals are elliptic and overlapping. Prominent veins are embedded on the petal surface. Petal color of the outer side is light purple (Royal Horticultural Society Color Chart, Purple Group 75A), the marginal zone of the inner side is very pale purple (Red-Purple Group, 69B), the middle zone of the inner side is also very pale purple (Purple Group, 76D), and the basal zone of inner side is yellowish white (White Group, NN155B) (Royal Horticultural Society, 2007) (Fig. 1C).

The leaves are papery and elliptic (6.0–7.5 cm in length × 2.0–3.5 cm in width, with a length-to-width ratio of 2.5) with short petioles (1.5–2.0 cm), an absence of lobes, and crenate margins. The color of leaves is medium green with a medium gloss and a weak intensity of anthocyanin coloration on the upper side.

‘Fen Balei’ sets very few fruits. The fruits are yellow, conical, and large (≈ 2.0 cm in vertical diameter and 2.5 cm in horizontal diameter) with weakly glossy exocarp and persistent sepals. Fruit peduncles are long (2.5–3.5 cm) and fruit persist for about 5 months.

‘Fen Balei’ is regenerated mainly by grafting during the fall season (August to September in Jiangsu, China) using M. hupehensis crabapple seedlings as the rootstock (0.5-cm diameter at ground level) and the current year’s healthy, plump buds from hardwood branches of the cultivar as the scion. After grafting, buds must be wrapped in plastic to prevent desiccation and should be stored with minimal exposure to dry air until the following spring (March in Jiangsu, China). At that time, the plastic wrappers should be removed or cut to expose the grafted buds. Attention should be directed to removing undesirable rootstock sprouts constantly. 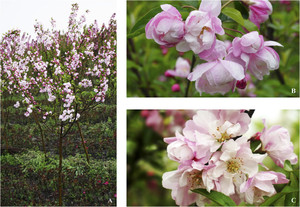