In Fall 2009, we collected more than 1,500 seeds of the Malus halliana in Henan Province of China. Because Malus seeds need cold stratification, we placed these seeds under moisture sand at –5 to 10 °C until radicles emerged. We then sowed them on raising beds in the field in Spring 2010 at the National Crabapple Germplasm Genetic Center (Yangzhou, Jiangsu, China) (Table 1). From 1,251 seedlings in 2012, one double-flowered seedling was observed and selected for further evaluation. In 2013 and 2014, the plant consistently exhibited 15 to 25 petals per flower, and we named this individual plant ‘Fenghong Nichang’ (Fig. 1). From 2013 through 2015, we also budded it into the popular rootstock, M. hupehensis, seedlings for 3 consecutive years. In 2016 and 2017, 177 budded plants showed the same flowering characteristics. From 2014 to 2015, we also conducted regional experiments in Shandong and Anhui Provinces (Table 1). ‘Fenghong Nichang’ showed the same flowering characteristics in these places.

Malus halliana has a long cultivation history in China. It has showy blossoms, rich flower colors, and pendulous flowers. ‘Fenghong Nichang’ contained three to five times as many petals as its maternal parent, M. halliana (Table 1). The breeding and selection of ‘Fenghong Nichang’ took 8 years, and all budded plants retained their unique flowering features. The grafted seedlings grew vigorously, exhibited good adaptation to high temperatures, and had no serious pest and disease.

The tree has reddish-brown branches and an upright spreading canopy, reaching a height of 4 m and a width of 1.8 m in 8 years.

Foliage is green, leathery, elliptic (7.1–8.0 cm in length, 2.6–3.2 cm in width, with a length/width ratio of 2.5), short petiole (1.0–1.3 cm), no lobes, and a serrate margin. The adaxial leaf surface exhibits a showy glossy appearance (Fig. 1B). Leaf blades are green on the surface and moderately glossy. There is no special ornamental value in fall.

This cultivar has loaded flowers. Each umbel inflorescence has five flowers. Each flower has 15 to 25 wrinkled petals, and the corollas are deep cup-shaped. Petals are elliptical, overlapping, and have prominent venation. Flowers are large (3.5–6.0 cm in diameter) with petals held in a horizontal position, five pistils, and numerous stamens (usually 30) (Fig. 1C). Flower buds are dark pink (RHS-61B) (Royal Horticultural Society, 2007). At anthesis, the marginal area of the inner side of the petal is reddish-purple (RHS-N74C), the middle zone of the inner side is purple (RHS-75C), the basal zone of the inner side of the petal is reddish-purple (RHS-62D), and the color of the outer side is light pink (RHS-N74B). Sepals are uncurling, magenta in color, and glabrous. The time of beginning of flowering (10% open flowers) is early April in Jiangsu, China.

The fruits are brown, ovoid, and relatively small in size (vertical diameter about 1.2 cm, horizontal diameter about 1.4 cm) (Fig. 1D). Calyx is abscised and the fruit stalks are low-hanging, reddish-brown, glabrous, and 2.5–4.0 cm in length. The predominant color in autumn is brownish (RHS-59A).

This cultivar prefers full sun, flat land, and a good depth of loose, rich, sandy soil with good drainage. It is suitable for planting in U.S. Department of Agriculture Cold Hardiness Zones 4 through 9. The plant is primarily propagated by budding with M. hupehensis as the rootstock. Buds should be greater than 0.5 cm in diameter for grafting. Scion buds from current year’s healthy hardwood branches should be used, and grafting should be performed from August to September. When grafting, buds need to be wrapped in plastic cover to prevent water loss, and the graft should be exposed to air until March of the following year by breaking or removing the plastic cover. Any sprouting from the rootstock plants should be removed in a timely manner. Compared with commonly used M. micromalus in China, ‘Fenghong Nichang’ has relatively stronger resistance to pests and diseases, with a low rate of production difficulty. Damage to young tips and leaves caused by apple aphids, spider mites, and apple rust are rare. To prevent aphids, the surfaces of the leaves can be sprayed with 50% Pimiricarb wettable powder (Kesheng, Yancheng, Jiangsu) at 2000× dilution. To prevent spider mites, the surface of the leaves can be sprayed with 1.8% Abamectin emulsion (Kesheng, Yancheng, Jiangsu) at 1000× dilutions. Spraying the surface of the leaves with 20% Triadimefon emulsion (New Sun, Chengdu, Sichuan) at 2000× dilutions can prevent apple rust. Trunk borers have not been observed.

Characteristics of flower, fruit, and foliage of ‘Fenghong Nichang’ crabapple. 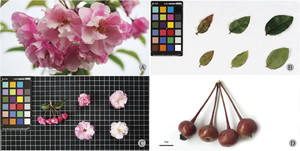