The variation of susceptibility to soft scald among orchards has been partially attributed to preharvest factors, including climatic conditions during fruit growth (Lachapelle et al., 2013; Moran et al., 2009), orchard location and fruit mineral element concentration (Tong et al., 2003), preharvest plant growth regulators treatments, such as 1-methylcyclopropene (DeEll and Ehsani-Moghaddam, 2010), and fruit maturity at the time of harvest (Tong et al., 2003; Watkins et al., 2003). The information regarding these treatments or field conditions is neither controlled by nor necessarily available to storage and packing sheds when fruit are received. For this reason, quality and maturity metrics may be useful to assess the physiological condition of fruit when it arrives at storage sheds and are used to make storage decisions. These assessments include peel background color, flesh firmness, SSC, starch index (SI), and TA. In Washington, weather stations situated at numerous locations across the state (Washington State University AgWeatherNet <www.weather.wsu.edu>) could also allow assessment of climactic factors, including GDD and CH.

Quality and maturity metrics vary greatly at the time of harvest. Although these quality and maturity measurements tend to follow a predictable progression in storage [i.e., the gradual decrease in fruit firmness and TA (Jan et al., 2012)], the ratio of one metric to another is not always consistent among fruit harvests (Watkins et al., 2005). Quality and maturity measurements also indicate important physiological processes in the fruit, including maturity, ripening, and senescence, which have demonstrated relationships with soft scald/soggy breakdown (Watkins et al., 2003). Previous work has further demonstrated that preharvest climactic conditions can impact ‘Honeycrisp’ postharvest disorders, such as low temperature affecting diffuse flesh browning (Tong et al., 2016) and precipitation affecting soft scald (Moran et al., 2009). It is not clear whether quality and maturity metrics also consistently reflect aspects of underlying fruit physiology that increases susceptibility to soft scald and soggy breakdown, although soluble solids have been documented to be negatively correlated with soft scald incidence (Tong et al., 2016).

The goal of this study was to assess readily accessible field temperature data and easily measurable fruit quality/maturity metrics as tools for making storage decisions to reduce the incidence of soft scald in ‘Honeycrisp’ apples during storage. We hypothesized that results would indicate the potential for quality and maturity measurements to be used as metrics to predict the incidence of storage disorders soft scald at harvest or during storage.

‘Honeycrisp’ apples [Malus sylvestris (L.) Mill var. domestica (Borkh.) Mansf.] were obtained from growers/cooperators at 15 orchards distributed among the Lake Chelan/Brewster, Columbia Basin, and Yakima Valley growing regions in Washington State and the Hood River growing region of Oregon State between 2 Sept. and 21 Oct. 2011 (locations indicated in Fig. 1A and harvest dates listed in Table 1). No preharvest treatments were applied, with the exception of an ethylene biosynthesis inhibitor (Retain; Valent BioScience Corporation, Libertyville, IL) to one orchard (Orchard M). To determine the effects of harvest-timing on postharvest soft scald and soggy breakdown, fruit from one site was harvested on three different dates, to represent an early, midseason, and late harvest (Orchard A). In 2011 as well as 2012 and 2013, quality and maturity measurements were performed on the day of harvest (section 2.4). Fruit was stored at 1 °C with no atmospheric modifications, and after 12 weeks, the incidence of soft scald and soggy breakdown was assessed.

Orchard and field temperature data and quality metrics summary for all 3 years of the study.

‘Honeycrisp’ apples were obtained from growers/cooperators at three sites in the Columbia Basin and Yakima Valley region of Washington State between 29 Aug. and 3 Oct. 2012 (locations indicated in Fig. 1B and harvest dates listed in Table 1).

‘Honeycrisp’ apples were obtained from growers/cooperators at five sites in the Lake Chelan and Yakima Valley region of Washington State between 11 Sept. and 26 Sept. 2013 (locations indicated in Fig. 1C and harvest dates listed in Table 1). The ethylene action inhibitor 1-methylcyclopropene (Harvista; AgroFresh Inc., Spring House, PA) had been applied to orchards A and M before harvest by the grower according to label instructions.

GDDs (base 10 °C) and CHs (base 4.4 and 10 °C) for each orchard were estimated using publicly available data obtained from the closest weather station via the Washington State University AgWeatherNet system (http://weather.wsu.edu/awn.php). Locations of weather stations used are indicated in Fig. 1D and corresponding annual GDD and CH are listed in Table 1.

Peel background color was subjectively rated using a color wheel as a guide (U.S. Department of Agriculture, Standard Ground Color Chart for Apples and Pears in Western States). The same person rated all the fruit for the entire experiment.

Firmness was analyzed with a Mohr Digi-Test 1.25 penetrometer (Mohr & Associates, Richland, WA) equipped with an 11-mm tip on one pared surface of each fruit. The parameters M1, Cn, C0, and E2 were collected (Evans et al., 2010; Mohr and Mohr, 2011). The maximum external fruit pressure (N) is termed M1, and indicates the firmness of the fruit from the peel boundary to a depth of 0.813 cm. E2 measures the pressure (N) at the boundary of the core (core firmness). Crispness (Cn) is a unitless measurement of the energy released during a pressure test, analogous to the energy released when biting into a fruit (Mohr and Mohr, 2011). Creep deformation (C0) measures the distance of fruit collapse under a 44.5 N creep force for 0.5 s from 0.813 cm. Low-quality fruit will have a higher creep factor than good-quality fruit.

Starch hydrolysis was visually assessed on a full-width tissue slice cut from the fruit equator using a 1–6 scale (Hanrahan, 2012) after staining with a 0.024-M iodide–potassium iodide solution. The same person visually assessed starch throughout the experiment.

Three trays of fruit (48 fruit) from each orchard were assessed for soft scald incidence after 12 weeks of storage at 1 °C. Soft scald was recorded as present (1) or absent (0). For subsequent analyses, categorization of at-harvest quality metrics was applied according to orchard: at-harvest quality metrics from orchards containing greater than 5% fruit with symptoms of soft scald at 12 weeks were categorized as “high-risk” for soft scald, whereas orchards with incidence of soft scald below 5% were categorized as “low-risk.”

Classical univariate receiver operatorting characteristic (ROC) curves and analyses were performed via ROCCET.ca (Xia et al., 2012). ROC curves can be used to evaluate data for the presence, sensitivity, and specificity of biomarkers that indicate or predict the presence or absence of a qualitative characteristic, for example, disease state (Xia et al., 2012). In this study, quality and maturity measurements were classified as potential biomarkers to predict the outcome of soft scald (positive/negative) or the outcome of soft scald–free fruit (positive/negative), if a high value in the measurement was associated with soft scald risk or if a high value in the quality/maturity measurement was associated with healthy fruit, respectively.

Orchards and their respective at-harvest quality/maturity data were categorized post facto as either “high-risk” or “low-risk,” depending on the soft scald incidence outcome at 12 weeks. The area under the ROC curve for each quality parameter was established within a 95% confidence interval calculated by using 500 bootstrappings. The optimal threshold for each parameter was established at the intersection of the highest true-positive and true-negative rate.

ROC analysis indicated significant differences (t test, P < 0.05) in background color, core pressure (E2), creep deformation (C0), CH base 4.4 °C and CH base 10 °C, GDD base 10 °C, IEC, SSC, and SI among the orchards that had soft scald at 12 weeks in storage compared with orchards that remained soft scald–free (Fig. 3). However, ROC analysis enables an enhanced interpretation beyond differences of within quality/maturity metrics at harvest between resistant and susceptible orchards. The threshold value for each quality parameter, combined with the true/false-positive, true/false-negative rate (Table 2), and area under the curve (Table 3) allows for assessment of the utility of any of these quality metrics as an indicator for soft scald risk at the time of harvest. For example, when higher values of a fruit quality/maturity measurement are associated with a higher risk for soft scald, true positives occur when the quality parameter level is above the specified threshold, and the orchard ultimately had soft scald incidence in storage; true negatives occur when the quality parameter level is below the specified threshold and fruit from that the orchard remained disorder-free. Most quality parameters proved to be inconsistent predictors of disorder incidence, based on evaluation of these results, despite significant differences in the t test. In the present results, higher core pressure (above 93 N), higher crispness (above 152), and higher firmness (61.5 N) were found in fruit that did not develop soft scald. Conversely, higher IEC (above 1.43 μL·L−1), higher SSC (above 12.9 °Brix), and TA (above 0.47% malic acid) were relatively higher in fruit that later developed soft scald. Per evaluation of ROC output, these parameters have little utility for soft scald prediction: all had an area under the curve (AUC) value of less than 0.7; in this case, AUC is an indicator of the predictive value of quality/maturity measurements. Values near 0.5 indicate that for a randomly chosen measurement, the likelihood that the value correctly indicates the sample is at risk for soft scald is ≈50%. In addition, not a single parameter had both a true-positive and a true-negative rate greater than 0.70. When higher values of a fruit quality/maturity measurement are associated with higher risk of soft scald, and the true-negative value is low, this means that the test is more prone to false positives: the quality parameter may be above the threshold level, indicating high likelihood of soft scald development, but the disorder never occurs. When the true-positive value is low, false negatives are more likely to occur: the quality parameter may be below the threshold level, indicating that the fruit is at lower risk for developing soft scald, but it does develop the disorder at some point in storage.

Field temperature data and at-harvest quality measures were evaluated for their ability to predict incidence of soft scald at 12 weeks of storage.

Numerous studies have researched the relationship among ‘Honeycrisp’ soft scald and soggy breakdown and a wide range of preharvest and postharvest parameters (DeLong et al., 2004; Moran et al., 2009, 2010; Robinson and Lopez, 2009; Watkins et al., 2005). This study aimed to assess at-harvest temperature data or quality metrics as predictors of soft scald via ROC analyses. The advantage of the parameters used in this study [field temperatures (GDD and CH) and quality metrics (SSC, TA, IEC, firmness, SI, color, and fruit weight)] is that these metrics could be readily available to a storage shed at the time of harvest in Washington State. For weather data, there is an extensive system of weather stations (AgWeatherNet, Washington State University, www.weather.wsu.edu) from which data can be freely downloaded at any location with a device that has an Internet connection. However, even orchards in close vicinity of a weather station may have a unique microclimate based on irrigation method, tree structure and age, or the use of evaporative cooling or netting (Hanrahan, personal communication). The chosen quality metrics could also be readily assessed through in-house quality testing, given the appropriate instruments.

In this study, TA was, on average, higher in fruit that eventually developed soft scald. TA can be influenced by many agronomic factors, including crop load (Robinson and Watkins, 2003), temperature, potassium fertilization (Lobit et al., 2006), and irrigation (Etienne et al., 2013). These same factors can influence disorder susceptibility (Moran et al., 2009; Robinson and Watkins, 2003; Tong et al., 2003), potentially explaining a link between TA and soft scald. To date, however, no physiological role for TA in soft scald development has been demonstrated.

Although current research results were not consistent enough for any single fruit quality parameter to be infallibly used as metric for predicting storage success, especially when using small numbers of fruit, we suggest continued evaluation of both SSC and TA in relation to soft scald disorder outcome.

In conclusion, 3 years of ‘Honeycrisp’ data in Washington State indicated that freely available weather station data and common fruit quality measurements as assessed at harvest are not reliable indicators for soft scald later in storage. Future work could incorporate a refinement of parameters, such as a larger fruit sample per site (≥100), temperature data taken directly in the orchard, several gradients of CHs (0, 1, 2, 4, 7, and 10 °C), and a more refined SSC (low-medium-high-very high). 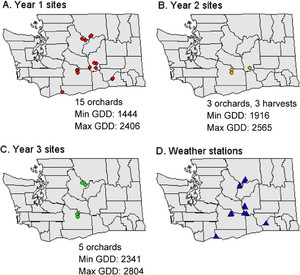 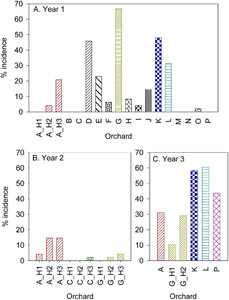 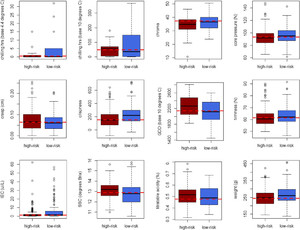