Cowpea [Vigna unguiculata (L.) Walp], an annual legume native to tropical and subtropical regions, is a protein-rich crop that complements staple cereal for human and fodder for livestock and also provides soil improvement benefits through nitrogen fixation. Cowpeas are commonly grown in the semiarid tropics between 35N to 30S of the equator, covering Africa, Asia, Oceania, the Middle East, Southern Europe, Central and South America, and the southern United States. The African countries of Nigeria and Niger account for 66% of world production. It is estimated that cowpeas are cultivated on 12.56 million hectares and have a worldwide production of 5.55 million tons; they are consumed by 200 million people on daily basis in the 20 countries with highest cowpea cultivation (Boukar et al., 2018; Singh et al., 1997).

Cowpea can be used at all stages of growth (Fang et al., 2007; Nielsen et al., 1997). The green seeds can be used fresh or canned or frozen for humans. The young leaves, pods, and peas contain vitamins and minerals, which are used for human consumption and animal feed. Cowpea can be consumed as dry seeds, canned or frozen food (Fery, 1993), and as milling flour in baked goods (Kushwaha and Kumar, 2014). The seeds are also used for human consumption as an affordable source of protein and a supplemental fodder for livestock. In addition, cowpea has been used as an alternative to soybean for people who are allergic to soybean protein (Boukar et al., 2018).

This study included 173 cowpea genotypes. The seeds were obtained from the USDA Germplasm Resources Information Network (GRIN) and increased in the field of University of Arkansas Research and Extension Center at Fayetteville, AR. The field experiments were conducted using a RCBD with three replications in two locations in Arkansas: Fayetteville (36°4′N, 94°9′S) and Alma (35°29′N, 94°13′S) (Supplemental Table 1). Each cowpea accession was planted in a single, 14-foot-long row, and the distance between rows (row spacing) was 3 feet. Plant spacing within rows was ≈4 inches. During the growing season, no pesticides, herbicides, or chemicals were sprayed to control pests, disease, or weeds. No irrigation was regularly maintained before maturity. The cowpea pods were bulk harvested when 90% of pods were dried based on differing maturity. The cowpea seeds were shelled and cleaned after pods were harvested.

A total of 1038 samples were collected from the 173 cowpea accessions at the two locations, with three duplications at each location. Before measuring seed protein content, each cowpea genotype was further selected for matured seeds, uniform color and size, and lack of damage from insects or machinery. To have a sufficient quantity of seeds for protein analysis, ≈20 g of cowpea seeds from each sample were ground using a coffee grinder (Hamilton Beach) for 1 min. Approximately 5 g of the ground powder was sieved through 100# (nominal wire diameter 0.1 mm), and 1 g of each sample was weighed and then transferred to a 0.2-mL microfuge tube for protein determination by N/protein analyzer.

On the basis of our experiments in this study, there were 173 cowpea genotypes growing in two locations using RCBD with three blocks (replications) in each location. ANOVA for seed protein contents among the 173 cowpea genotypes was conducted (Table 1) using the two-way genotype × environment (GE) model suggested by Singh et al. (1993). The broad-sense heritability (H2) was estimated using the formula.
Table 1.

Analysis of variance for seed protein contents among 173 cowpea genotypes.

In this study, based on the seedcoat color, there were 18 cowpea accessions with black seedcoat, 26 blackeye, 29 browneye, 12 cream, 8 pinkeye, 15 red, 19 red Holstein, 26 tan, and 20 varied (Table 3). ANOVA based on seedcoat and multiple comparisons using Student’s t-test were also analyzed with JMP Genomics 7.

Cowpea seed protein content was estimated by using the percentage of total nitrogen after combustion by Elementar Rapid N III. Significant variations were observed for the seed protein content among 173 USDA cowpea accessions (Fig. 1), ranging from 21.8% to 28.5% with an average of 25.6% (Supplemental Table 1; Fig. 1).

In this study, two experimental locations exhibited similar cowpea seed protein content. The mean seed protein content of 173 cowpea accessions in Alma and Fayetteville, AK, were 25.67% and 25.58%, respectively, a nonsignificant difference between the two locations (P = 0.05). The University of Arkansas campus farm in Fayetteville (36°4′N, 94°9′S) is on the outskirts of the Boston Mountains, deep within the Ozarks. The Vegetable Research Station in Alma (35°29′N, 94°13′S) is located in the Arkansas River Valley at the edge of the Ozark Mountains, 50 miles away from the Fayetteville location. There is little difference in weather, temperature, and soil conditions between the two locations. Both are zone 7a according to the USDA Plant Hardiness Zone Map. The short distance and different conditions between the two locations did not affect seed protein content in cowpea. Different ecological regions and geographic environments should be considered if cowpea protein content is evaluated in future research.

The seed protein content in 173 USDA cowpea germplasm were similar in two experimental locations, with no significant difference was observed between locations. Some germplasm accessions were virtually the same at the two testing sites. For example, there was little difference between PI 250416 and PI 663151 in seed protein content (0.002% and 0.010%, respectively) at the two experimental locations. However, there were large differences in some accessions between the two sites. For example, the seed protein content of accession PI 663148 was 26.9% in Alma and 20.3% in Fayetteville, respectively, showing a clear difference between the two locations. Similarly, PI 583513 had 28.3% in Alma and 23.1% in Fayetteville (Supplemental Table 1).

Interaction between germplasm and location. 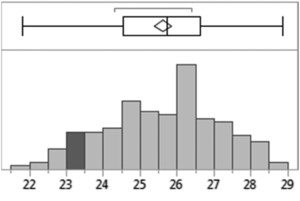