The world’s first major macadamia breeding program was initiated by the University of Hawaii (UH) at the Hawaiian Agricultural Research Station (HAES) (Hamilton and Ito, 1982). In 1934, UH commenced surveying of seedling macadamia orchards to select superior genotypes based on tree growth, structure, bearing habits, cracking quality, nut size and shape, kernel size, and kernel recovery (Hamilton and Fukunaga, 1970; Hamilton and Storey, 1956). From more than four decades of evaluation of more than 100,000 seedlings, ≈650 were selected for further evaluation. After successful evaluation and testing in multiple sites, 13 cultivars were named and released for commercial cultivation depending on the adaptation to location and preference of individual growers (Hamilton and Ito, 1982). Although several breeding programs are now continuing around the world, these HAES cultivars still dominate world macadamia production (Aradhya et al., 1998; Hardner, 2016).

‘Keaau’ (‘HAES660’) and ‘Mauka’ (‘HAES741’) are two important varieties from HAES selections, and grafted clones are commercially cultivated worldwide. Cultivar HAES660 was recommended for commercial plantation across a wide range of conditions because it performed well in most of the areas in which it was tested (Hamilton and Ooka, 1966). On the other hand, ‘HAES741’ was recommended mainly for areas at 550 to 670 m altitude, where the performance of most other cultivars was marginal (Hamilton and Ito, 1977). Interestingly, both of them were reported to have a similar upright pattern of growth habit and 43% to 44% kernel recovery (Hamilton and Ito, 1982). A detailed morphological characterization of macadamia varieties identified limited variation between these two cultivars (Bell et al., 1998), despite undocumented reports of morphological variation by the growers. Previous molecular marker studies (Aradhya et al., 1998; Nock et al., 2014; Steiger et al., 2003) identified a very close genetic relationship between the two cultivars.

Aiming to confirm the identity of these two varieties, we reviewed the historical evidence of the development of these two cultivars, investigated the phenotypic differences in a replicated trial, and determined the genetic differences using a large number of high-throughput molecular markers.

Historical evidence was developed from a review of literature and original UH-HAES selection books collected by Craig Hardner (personal communication) during his visit to Hawaii in 2013.

In Aug. 2017, four individual, mature trees of ‘HAES660’ and HAES741’ were phenotyped in a cultivar trial at Wolvi, Queensland, Australia. The trial was planted as randomized blocks with single-tree plots and four replicates. Phenotypic measurements were acquired for several morphological traits, including leaf, internode, flower, nut, and growth characteristics (Table 1). To characterize leaf and internode traits, three twigs from the final growth unit were selected from three randomly selected branches of each tree. Leaf traits were measured for length (in millimeters), width (in millimeters), and area (square centimeters). Internode length (in millimeters) was measured from the first three internodes from the tip of the recent growth unit. To measure raceme length (in millimeters) and floret density (number of florets per centimeter), 10 racemes were collected randomly from each plant. Nut characteristics were measured from 20 randomly selected nuts per tree. For growth characteristics, height (in centimeters) and width (in centimeters, along the row and across the row), and trunk circumference (in centimeters, at 30 cm above the base) of each tree were measured. Yield data from four sites (Walkamin, Wolvi, Clunes, and Rockhampton) were collected from a previously archived database. The Walkamin, Wolvi, and Clunes trials were planted in 1984, whereas the Rockhampton trial was planted in 1985 (Gallagher et al., 1997). For both cultivars, we evaluated cumulative nut-in-shell (CNIS) yield data collected from 1991 to 1996. We also reviewed phenotypic characteristics reported by Bell et al. (1998) and grower observations (L. Bryen, personal communication). 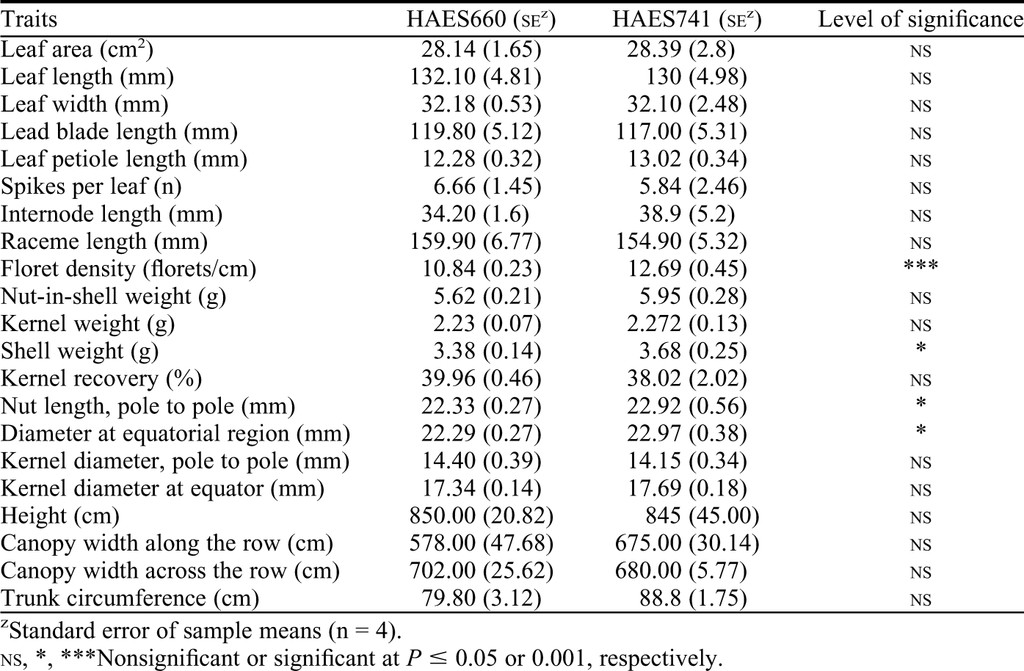 Genetic similarities were estimated using silicoDArT marker data of ‘HAES741’, ‘HAES660’, and 28 other cultivars. DARwin 6.0 (Perrier and Jacquemoud-Collet, 2006) software was used to develop an unweighted neighbor-joining dendrogram and to illustrate the genetic similarity among cultivars.

Morphological and yield data of ‘HAES741’ and ‘HAES660’ were analyzed using Genstat version 18 (Payne et al., 2011) software. Restricted maximum likelihood (REML) mixed-model analysis was used to test (Wald) the significance of each fixed effect included in the models. For phenotypic data analysis of the Wolvi trial, we considered cultivar and replication as fixed effects, and residual as random. For yield trial analysis, initially we analyzed data from individual trials, considering cultivar and replication as fixed effects, and residual as a random effect. For multilocation trial analysis, cultivar, cultivar-by-location interaction, and replication were used as fixed effects, and residual was used as a random effect. The mean trait value of each cultivar was also estimated from REML mixed-model analysis. A least significant difference procedure was used to compare cultivar means only when the cultivar effect was significant (P < 0.05).

Historical evidence of the development of ‘HAES660’ and ‘HAES741’.

Cultivars HAES660 and HAES741 are the products of initial macadamia selection pioneered by UH. ‘HAES660’ was selected in 1948 whereas ‘HAES741’ was selected in 1957. These two cultivars were named ‘Keaau’ and ‘Mauka’ in 1966 and 1977, respectively. Previous literature (Hamilton and Ito, 1977; Hamilton and Ooka, 1966) suggested that these two cultivars originated from the same orchard, although there was some confusion about the name of the orchard (Hardner, 2016). Hamilton and Ooka (1966) reported that ‘HAES660’ was selected from the Deschwanden orchard in the Lawa’i valley on Kauai. In another study, Hamilton and Ito (1977) reported ‘HAES741’ was a selection from the Glaisyer orchard in the Lawa’i valley on Kauai, but they also indicated that both ‘HAES660’ and ‘HAES741’ originated from the same orchard. Based on this information, Hardner et al. (2009) initially reported that these two cultivars were selected from the Glaisyer orchard. Subsequently, evidence from the original UH-HAES selection books (Figs. 1 and 2) confirmed the origin of these two cultivars (Hardner, 2016), although there is some veracity of information in the UH-HAES selection books, particularly with regard to the alignment of column headings and data. According to the selection books, the original trees of both ‘HAES660’ and ‘HAES741’ were selected from the Deschwanden orchard on Kauai. Although ‘HAES741’ was selected 11 years after the selection of ‘HAES660’, both trees were marked as tree “#3” (Figs. 1 and 2). A possible source of seeds for Deschwanden orchard planting was Nutridge (Hardner, 2016), the first commercial orchard of macadamia in Honolulu. Hardner (2016) also suggested that the planting seed may have been transferred by macadamia enthusiast Francis Takahashi, who had planted an orchard ≈2.5 km to the south of the Deschwanden orchard.

Phenotypic characterization of ‘HAES660’ and ‘HAES741’.

Individual trial analysis showed that there were no consistent differences in variation for across-site CNIS yield (Table 2). Of four different sites, the variability in CNIS was significant only at the Rockhampton site, where ‘HAES660’ (70.03 kg) produced almost half the CNIS of ‘HAES741’ (133.55 kg). Rockhampton has the lowest elevation (15 m above sea level) of all the sites. During the trial period, the Rockhampton site was also the hottest and driest of trial sites (Gallagher et al. 1997). However, multilocation REML mixed-model analysis revealed nonsignificant effects of cultivar and cultivar-by-location interaction (Table 3), although location effect was significant.

Variability in cumulative nut-in-shell yield of macadamia cultivars HAES660 and HAES741 in years 1991 to 96.

Results from restricted maximum likelihood mixed-model analysis showing the level of significance of each effect on yield in four different locations.

Bell et al. (1998) also found it difficult to distinguish ‘HAES660’ from ‘HAES741’. Our results support the observations of Bell et al. (1998) and Lindsey Bryen (personal communication) with regard to phenotypic characteristics (Table 4). Both cultivars showed similar growth, leaf, and stem characteristics, with differences in nut size. As reported in the UH-HAES original selection book (Figs. 1 and 2), our observations showed that ‘HAES660’ and ‘HAES741’ have no significant difference in kernel recovery.

Summary of phenotypic characteristics of ‘HAES660’ and ‘HAES741’ based on Bell et al. (1998) and observations by Lindsay Bryen (personal communication).

Based on the evidence reported, we conclude that ‘HAES660’ and ‘HAES741’ are isogenic or near isogenic and have THE same ancestors. The key evidence follows:

In addition, we suggest that both cultivars may have been derived (clonally propagated) from the same plant because they were collected from the same orchard and have the same tree number (#3) marked in the original UH-HAES selection books. The variation in some simple phenotypic traits may be the result of phenotyping errors or mutational variation in one or a few genes. Another possibility is that both cultivars may be autogamous full-sib progeny of the same plant. Comparing the nuclear genome DNA sequences of both cultivars would ascertain the actual genetic identity, although this would still not account for possible epigenetic differences. 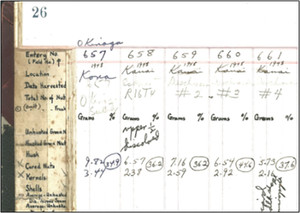 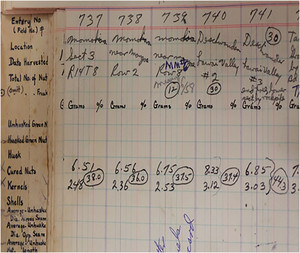 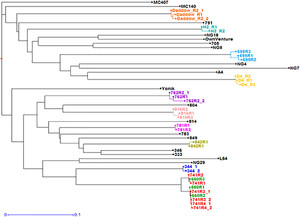