‘WSU 2166’ is a new floricane fruiting raspberry cultivar (Rubus idaeus L.) released by Washington State University (WSU). ‘WSU 2166’ produces large, firm fruit that are well suited to machine harvesting and for processing. Because of its flavor, large fruit, attractive appearance, and easy fruit release at an early stage of maturity, ‘WSU 2166’ also should be suitable for fresh market use. It has good levels of tolerance to Phytophthora rubi (Man in ‘t Veld, 2007) in field trials.

After ‘WSU 2166’ was selected, it was propagated from primocane shoot tips at WSU Puyallup. It was planted in a nonreplicated plot consisting of 10 plants with a cooperating grower in Lynden, WA, in 2011. A nonreplicated plot of eight plants was planted in 2014 by another grower. These plantings were maintained by the growers using standard commercial production practices and picked every 2 to 3 d during the harvest season. Fruit was subjectively evaluated weekly over two harvest seasons, beginning 2 years after planting. The plots were evaluated for suitability to machine harvesting and overall fruit quality. In the 2014 planting, in addition to subjective evaluations, fruit were weighed for each harvest to determine yield and midpoint of harvest (date of 50% yield). The performance of ‘WSU 2166’ was good compared with ‘Cascade Harvest’ (Moore et al., 2015), ‘Meeker’ (Moore and Daubeny, 1993), and ‘Willamette’ (Daubeny et al., 1989) in the same planting, indicating favorable yield potential. In each of these plantings, the fruit ‘WSU 2166’ harvested easily and had large fruit size and good flavor.

Fruit of ‘WSU 2166’ were hand-harvested in a replicated planting at WSU Puyallup established in 2014. The planting was arranged in a randomized complete-block design with three replications of three plants in each plot, with 0.9 m between plants and 2.4 m between rows. The plantings were not sprayed for disease, but the plantings were treated for spotted wing drosophila (Drosophila suzukii Matsumura). Fruit were harvested by hand in 2016 and 2017, once or twice a week depending on environmental conditions and rate of ripening, and weighed to determine total yield. The weight of fruit with visible symptoms of fruit rot (mainly Botrytis) was measured separately at each harvest and divided by total yield to determine the percent of harvested yield affected by rot. In 2016, the yield of ‘WSU 2166’ was lower than that of ‘Cascade Harvest’, ‘Meeker’, and ‘Willamette’ (Table 1), which might be explained by slower establishment, as the ‘WSU 2166’ plots were observed to have fewer canes per hill than other cultivars. In 2017, the yield of ‘WSU 2166’ was similar to all three cultivars.

At each harvest, a subsample of 25 randomly selected fruit was weighed to determine average fruit weight. The seasonal fruit weight was calculated as a weighted arithmetic mean of fruit weight using the following formula:where x = average berry weight in g from individual harvest and w = the weight (importance) of each harvest relative to total season yield. According to Fisher’s protected least significant difference (lsd) method, the fruit weight of ‘WSU 2166’ was greater than ‘Meeker’ and ‘Willamette’ in both 2016 and in 2017. The midpoint of harvest date of ‘WSU 2166’ was similar to that of ‘Willamette’ and earlier than ‘Cascade Harvest’ and ‘Willamette’ in 2016. In 2017, ‘WSU 2166’ was earlier than ‘Cascade Harvest’ (Table 1).

Average fruit firmness was measured as the force a Hunter Spring Mechanical Force Gauge (Series L; Ametek, Hatfield, PA) required to close the opening (compression strength) of 5 randomly selected from each plot from each harvest (Barritt et al., 1980). The seasonal average for fruit firmness was calculated by a similar weighted mean as for average fruit weight. Morphological measurements of ‘WSU 2166’ fruit were compared with ‘Cascade Harvest’ and ‘Meeker’. Each data set was analyzed as a randomized block design using analysis of variance and Fisher’s protected lsd method for mean separation (SAS 9.4; SAS Institute Inc., Cary, NC). ‘WSU 2166’ was firmer than ‘Meeker’ and ‘Willamette’ in 2016, but no significant differences in fruit firmness were observed among the cultivars in 2017.

‘WSU 2166’ was evaluated in the U.S. Department of Agriculture–Agricultural Research Service (USDA-ARS)/Oregon State University (OSU) cooperative breeding trials at the OSU-North Willamette Research and Extension Center (NWREC) in the Willamette Valley (Aurora, OR). Fruit production was measured in a planting established in 2014 with four replicates of plots that had three plants each. Each plot was harvested by hand in 2016 and using a machine harvester in 2017. Compared with ‘Lewis’ and ‘Meeker’, ‘WSU 2166’ had significantly larger fruit overall over 2 years and similar yields (Table 2). The harvest season in Oregon passed 50% harvest for ‘WSU 2166’ on 23 June, which was about 5 d earlier than ‘Meeker’ and 11 d before ‘Lewis’ and the time from first to last harvest was 24 d for ‘WSU 2166’ and for ‘Meeker’ (data not shown). 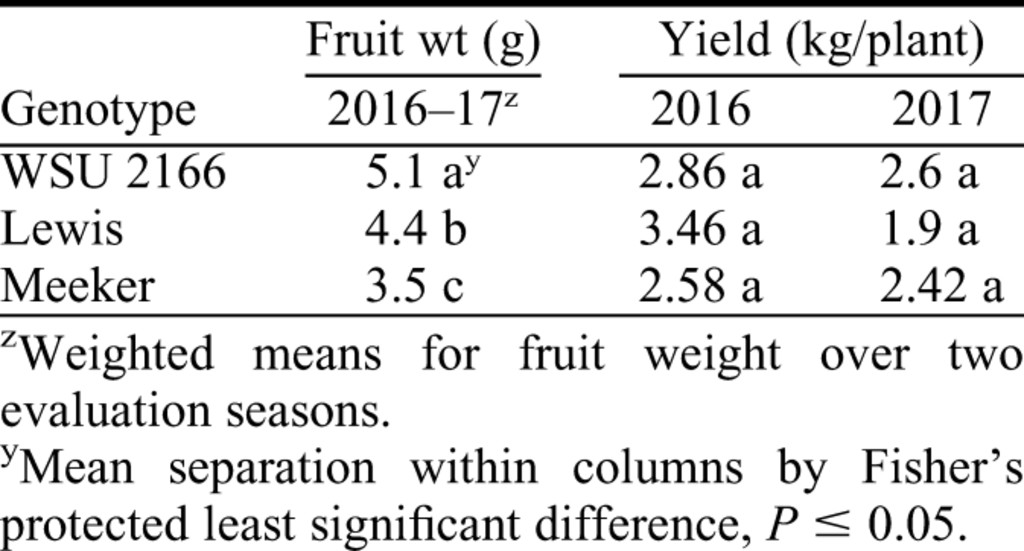 Mean yield and fruit weight in 2016–17 for floricane-fruiting raspberry cultivars in Abbotsford, BC, planted in 2014 and harvested with a machine harvester.z

Mean yield and fruit size in 2018 for floricane-fruiting raspberry cultivars in Abbotsford, BC, planted in 2016 and machine harvested.

On the basis of these evaluations in Oregon, WA, and British Columbia, ‘WSU 2166’ has shown adaptability throughout the Pacific Northwest growing area. 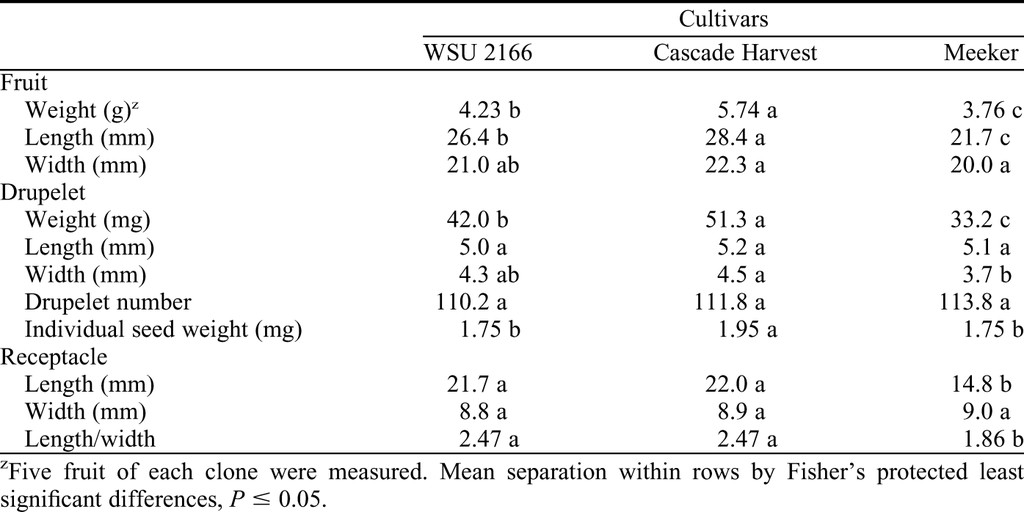 Storage characteristics of ‘WSU 2166’ were compared with ‘Cascade Harvest’ (Table 6). Fruit were hand harvested 3 July 2017 to determine color (McGuire, 1992), firmness, and weight of 24 fruit of each cultivar. Firmness was destructively measured on 12 of the harvested fruit for each cultivar then discarded. The remaining 12 fruit were stored at 4 °C for 7 d, then stored at room temperature (≈20 °C) for 4 h, then evaluated for poststorage color, weight, and firmness. The effect of cultivar and storage on firmness, berry weight, and color (hue, value, and chroma) were determined by an analysis of variance using a mixed procedure (Proc Mixed) in SAS 9.4. There was a highly significant effect of cultivar and storage for firmness, berry weight, and value (data not shown). There were no significant interaction effects of clone × storage for any variable. Because there were no interaction effects, data for each trait were analyzed separately for each storage condition of before and after (Table 6). The fruit of ‘WSU 2166’ had a greater weight and greater firmness than ‘Cascade Harvest’, both going into storage and after storage. There were no significant differences for ‘WSU 2166’ and ‘Cascade Harvest’ for hue and chroma. ‘WSU 2166’ was slightly, but significantly, lighter in value than ‘Cascade Harvest’ both pre- and poststorage. There were no significant effects of cultivar or storage on hue, and no significant effect of cultivar on chroma, though storage had a significant effect, with post-storage chroma values being lower than before storage for both cultivars (data not shown).

Fruit weight, firmness, and color before and after storage for hand-harvested fruit of two cultivars in plots Puyallup, WA.z 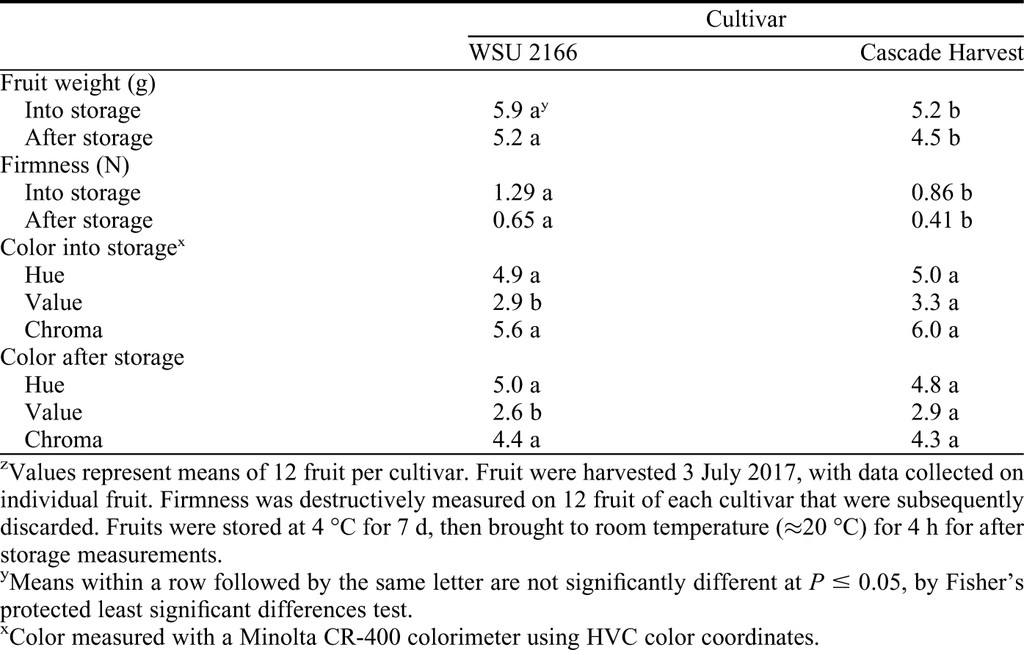 Machine-harvested fruit samples of ·300 g were collected from the two nonreplicated plantings (established 2011, 2014) in Lynden, WA, and analyzed for pH, titratable acidity, soluble solids, total anthocyanins, and total phenolics. Single samples of each clone were collected in 2013, 2014, and 2017 from nonreplicated plots. Samples were analyzed in duplicate and averages presented without statistical analysis. The pH of the juice was measured with a Thermo Scientific Orion Star A211 pH meter (Beverly, MA); titratable acidity by titration to pH 8.1 with 0.1 N NaOH; and soluble solids with an Atago PAL-1 refractometer (Atago U.S.A., Inc., Bellevue, WA). Total anthocyanins were determined by a pH differential method described by Lee et al. (2005) using a Shimadzu ultraviolet-1201 spectrophotometer (Shimadzu Corp., Kyoto, Japan), and expressed as cyanidine-3-glucoside (molar extinction coefficient = 26,900 L·cm−1·mol–1, molecular weight = 449.2 g·mol–1). Total phenolics were determined with the Folin–Ciocalteu method described by Waterhouse (2001) and expressed as gallic acid equivalents. Each sample was measured in duplicate and the results averaged. ‘WSU 2166’ had similar soluble solids as ‘Willamette’, lower pH than ‘Meeker’, and less total anthocyanin content than ‘Willamette’ (Table 7).

Because of the ease of fruit release, firmness, large size, and attractive appearance with darker fruit color than ‘Cascade Harvest’, ‘WSU 2166’ is suitable for either processed or fresh market uses.

‘WSU 2166’ is a floricane fruiting raspberry that has not been observed with primocane fruit at WSU Puyallup. Dark purple prickles are numerous at the base of primocanes, but few to no prickles were present at 1.2 m. The prickles are straight and pointed toward the base of the canes. The pigmented spots at the base of the prickles were the same color as the prickles and oval in shape. Primocanes of ‘WSU 2166’ are a light green in midsummer. There is no visible pubescence on the canes of ‘WSU 2166’. The primocane leaflets are pinnately compound and generally with five leaflets. During the evaluation years of 2016 and 2017, fruit of ‘WSU 2166’ had early season fruit production with a midpoint of harvest similar to ‘Willamette’ (Tables 1 and 8).

Yield and midpoint of harvest of four floricane-fruiting red raspberry cultivars planted in a grower field in Lynden, WA, in 2014 and machine harvested in 2016–17.

‘WSU 2166’ was evaluated for susceptibility to Phytophthora root rot in naturally infested plots at WSU Puyallup Goss Farm in plantings established in 2014. The presence of P. rubi in these plots has been verified previously using ITS primers DC1 and MP5 (Bonants et al., 1997, 2004). The root rot trial consisted of 14 total clones, including one cultivar, ‘Lewis’. Four plants of each clone were planted in a randomized complete block design. Plants were evaluated in the fall of each year after planting using a subjective rating for vigor from 0 to 5, with 0 being dead and 5 a healthy and vigorous plant free of root rot symptoms. In all 3 years, there was a significant effect of clone at the P < 0.001 level (Table 9). In 2015, 1 year after establishment, ‘WSU 2166’ had significantly lower ratings than the best performing clones. However, in the second and third evaluation years, ‘WSU 2166’ showed moderate levels of root rot tolerance, with ratings similar to the most tolerant clones and significantly greater than the least tolerant clones. On the basis of this evaluation, ‘WSU 2166’ is not immune to root rot but has a moderate level of root rot tolerance.

Root rot ratings for 14 red raspberry clones established in 2014 in a site infested with P. rubi and evaluated for three subsequent years in Puyallup, WA. 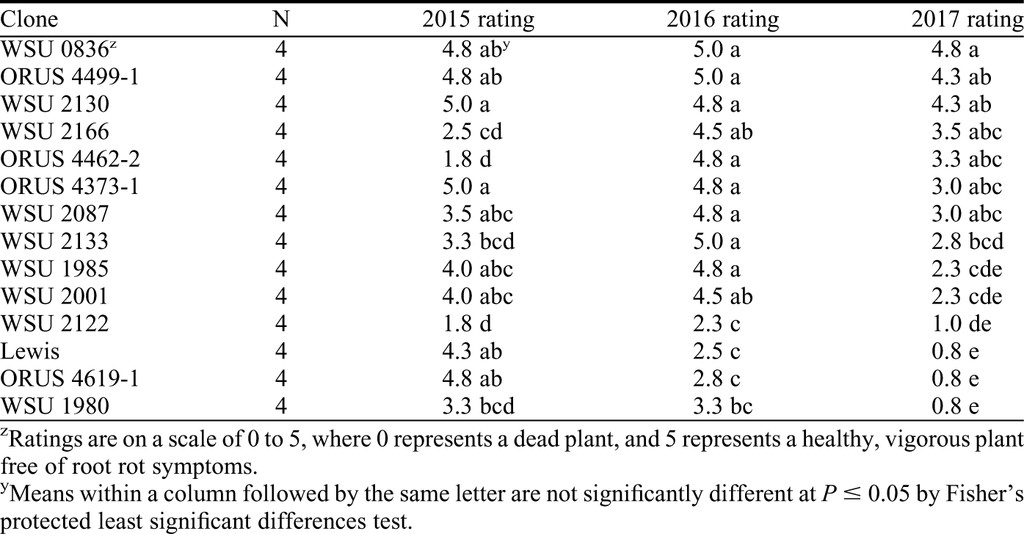 ‘WSU 2166’ produces large, firm fruit with excellent flavor. Fruit of ‘WSU 2166’ machine harvest easily and are suitable for processing. However, the flavor, large fruit size, attractive appearance, and easy fruit release also makes ‘WSU 2166’ suitable for the fresh market. ‘WSU 2166’ may allow for longer planting rotations because of tolerance to Phytophthora root rot. It is expected that ‘WSU 2166’ will be an early season cultivar, overlapping with ‘Willamette’ in most of the region. 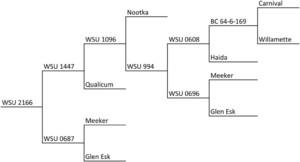 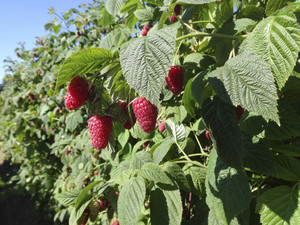