Three additional cycles of phenotypic recurrent selection were conducted in 2006, 2008, and 2010. Bulbs were selected for a more rounded and uniform shape, increased bulb firmness when hand squeezed, fewer pink root symptoms, and darker red-colored dry outer scales. In June 2011, bulbs were selected from 10-19 for the same characteristics; and successively, in Oct. 2011, single bulbs were placed into 23 separate, small isolation cages for self-pollination, with 12-109 being one of those cages. In May 2012, bulbs in all cages flowered, pollinators were introduced, and seed was harvested. In Sept. 2012, seeds of 23 lines were sown and in June 2013, bulbs of each line were evaluated for the same characteristics and all bulbs of 12-109 were selected without making an individual bulb selection. In Oct. 2013, these bulbs were placed in a crossing cage numbered 14-09. In May 2014, bulbs flowered, pollinators were introduced, and seed was harvested and labeled as ‘NuMex Silhouette’.

Bulb maturity, scape production, pink root severity rating, marketable yield, average bulb weight, and percentage of single centers of ‘NuMex Silhouette’ as compared with ‘Mata Hari’ when grown in Las Cruces, NM, from 2015 to 2016 and 2016 to 2017. 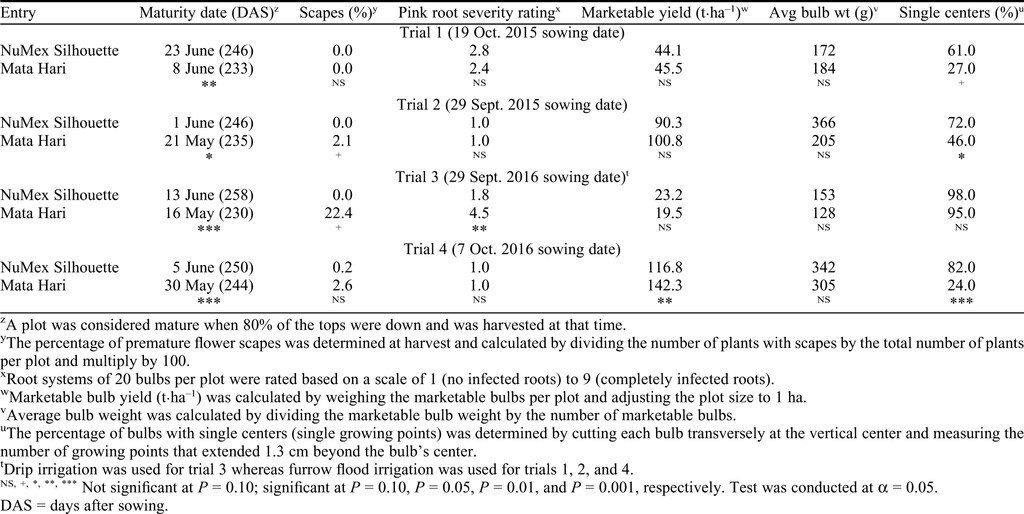 Before harvest, the number of premature flower scapes was counted for each plot. From this number, the percentage of seedstalks was determined based on the total number of plants in the plot. Each plot was harvested when 80% of the plants in the plot had lodged. The harvest date was considered the maturity date, and the days from sowing until harvest were counted for each plot. The root systems of 20 bulbs from each plot were rated for the severity of pink root symptoms on a scale of 1 (no infected roots) to 9 (completely infected roots). After rating, bulbs were placed in mesh sacks and, on the same day, transferred indoors to an onion shed. Bulbs were cured for 3 to 4 d under ambient conditions to reduce storage losses and decay. After curing, the total bulb fresh weight was measured for each plot. Bulbs were graded to remove culls (diseased bulbs, bulbs less than 3.8 cm in diameter, split and double bulbs). The number of culls was subtracted from the total bulb number to obtain the marketable bulb number per plot. After bulbs were graded, they were weighed again to obtain marketable bulb weight per plot. The average bulb weight was calculated by dividing marketable bulb weight by marketable bulb number. After grading, 25 bulbs were cut transversely at the widest point on the vertical axis to determine the percent of bulbs possessing a single meristem. If a bulb possessed a single meristem or multiple meristems within 1.3 cm of the bulb center, then the bulb was considered single-centered. A t test [SAS statistical software (SAS Institute, Cary, NC, version 9.4)] was used to determine differences between means of ‘NuMex Silhouette’ and ‘Mata Hari’ for each trait.

‘NuMex Silhouette’ (Fig. 2) is a late-maturing, short-day, open-pollinated, globe-shaped onion with red-colored dry outer scales that matures from 1 to 23 June when autumn-sown in Las Cruces, NM (Table 1). Suggested planting dates at Las Cruces are 25 Sept. to 10 Oct. Bulbs of ‘NuMex Silhouette’ mature 6 to 28 d later than bulbs of ‘Mata Hari’ (Table 1). This later maturity will allow for continuity of harvest of red onions. When conditions were conducive for premature seedstalk formation, bulbs of ‘NuMex Silhouette’ exhibited a lower percentage of scapes (seedstalks) than bulbs of ‘Mata Hari’ (Table 1). Bulbs of ‘NuMex Silhouette’ exhibited a comparable or reduced amount of pink root symptoms when compared with bulbs of ‘Mata Hari’ (Table 1). Two trials exhibited no incidence of pink root disease because the causal organism was not present in these fields. This lack of pink root also impacted marketable bulb yield and bulb weight. Both of these traits were greater in trials 2 and 4, where no pink root was observed, than in trials 1 and 3, where the pink root incidence was greater. Typically, fields that have no previous history of onion cultivation exhibit a low pink root incidence, whereas fields used previously for onion cultivation have a greater incidence of pink root. Even with differences between trials in average marketable bulb yield and bulb weight, both were comparable between ‘NuMex Silhouette’ and ‘Mata Hari’ (Table 1). The percentage of single-centered bulbs produced by a red onion bulb cultivar is desirable for visual display when the bulb is cut transversely. The percentage of single-centered bulbs is often a function of bulb size, as smaller bulbs tend to have fewer elongated meristems whereas larger bulbs tend to have more. When larger bulbs were produced, ‘NuMex Silhouette’ produced a greater percentage of single-centered bulbs than ‘Mata Hari’, even though the average bulb size was similar between both cultivars (Table 1). 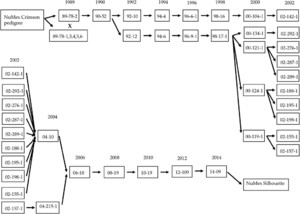 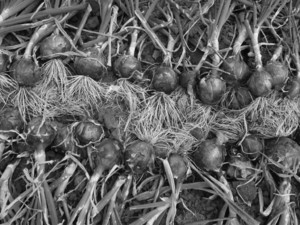