Water deficiency is common in the western United States, such as California, Nevada, Arizona, Utah, Colorado, and New Mexico, where climate is arid and semiarid. Approximately 30% to 50% of the potable water is used for outdoor landscape irrigation in these western states (Maupin et al., 2014). Water scarcity and population expansion are the impetuses for many cities and water districts to search for alternative strategies to promote fresh water conservation. One strategy is using treated wastewater (recycled water) for landscape irrigation. Golf courses are the leading urban landscape users of recycled water. 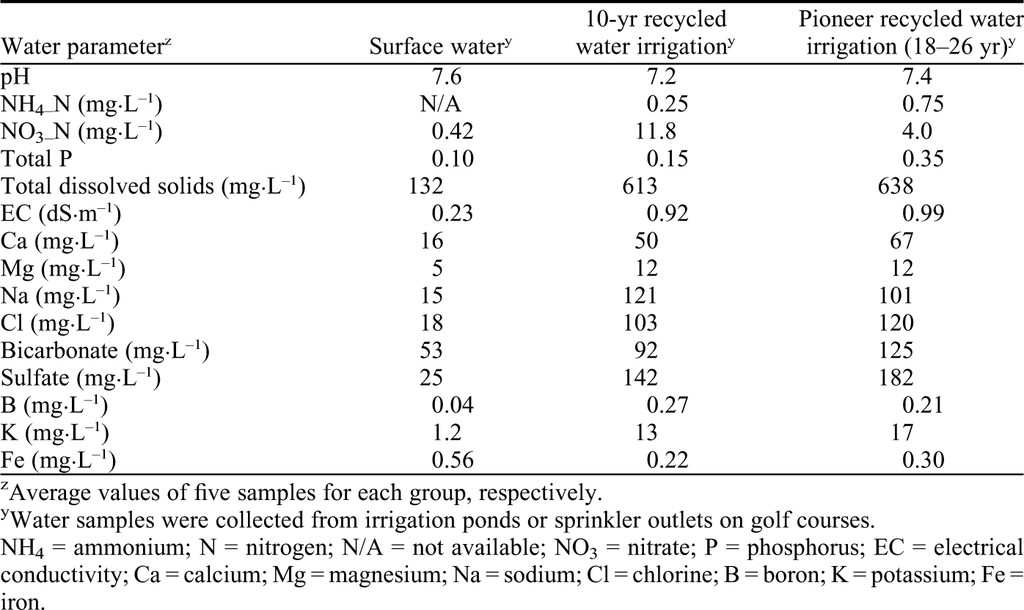 The study sites were in a semiarid climate. The average annual precipitation is about 35 cm.

May to August are the months with monthly precipitation typically exceeding 5 cm. The reference evapotranspiration in northern Colorado ranges from 95 to 120 cm during the growing season (Clifford and Doesken, 2009).

Three to four random holes from each golf course were chosen, and data on turf quality and soil and KBG shoot samples were collected from 11 holes in the “10-year recycled water irrigation golf courses.” For the “pioneer recycled water irrigation golf courses,” the total number of holes included for data collection was nine. Data also were collected from five holes of two golf courses that had been established at least 15 years ago and had been irrigated with surface fresh water since the course development. Over a 5-week period in late July to August, plant and soil samples were collected once for each site, and turf quality was evaluated concurrent with soil and plant sample collections.

We collected turf shoot samples on the roughs less than 2.5 m away from the sides of fairways. No apparent traffic injuries were present at the selected data-collection areas. Turfgrass was regularly mowed to 50 to 64 mm. Three shoot samples from three 100-cm2 randomly selected areas of each hole were collected using scissors cutting about 1 cm aboveground surface. Three samples were combined. All samples were sealed in zip-lock plastic bags and placed in a cooler for transportation to the laboratory.

Concurrent with shoot sample collection, turf quality for ≈5 m2 of the rough area surrounding the shoot sample collection spots was rated based on color, density, and uniformity, with a rating of 1 representing brown, thin, dead turf. A rating of 6 was considered minimum acceptable turf for golf course rough, and 9 was considered the best quality, with the appearance of dense, uniform turf with an emerald green color (Morris and Shearman, 2010).

Turf shoots were rinsed with deionized water and dried in an oven at 70 °C for 24 h. Afterward, the materials were ground in a Thomas Wiley Mill to pass through a screen with 425-µm openings. About 1 g of screened and dried sample was weighed and ashed for 7 h at 500 °C. Ash was dissolved in 10 mL of 1 N HCl and diluted with deionized water. Solution aliquots were analyzed on inductively coupled plasma atomic emission spectrophotometry (Model 975 plasma Atomcomp; Thermo Jarrell Ash Corp., Franklin, MA). Chloride concentration was analyzed using the Cl− selective electrode (Thermo Electron Co. Orion 9617BNWP; Thermo Fisher Scientific, Waltham, MA).

Turf quality and mineral concentrations in the KBG shoots were tested by analysis of variance, with different irrigation group as the treatment factor and individual golf courses as the block factor (Table 2) (SAS Institute, 2011). Comparison of the three different golf course groups was accomplished by the least significance difference method (Table 3). The Pearson correlation test was performed by Proc CORR to obtain Pearson statistic coefficients of individual minerals and its relationship with turf quality. Stepwise regression was conducted to determine whether any of the minerals accumulated in shoot tissues were related to turf quality ratings. Stepwise multiple regressions were done by using turf quality as a response variable and 13 mineral concentrations plus K/Na ratio as predictor variables, and significance was chosen at the probability level of 0.05 (SAS Institute, 2011). The relationship among shoot Na concentration, soil chemical properties, and turf quality also were determined using regression analysis described previously. 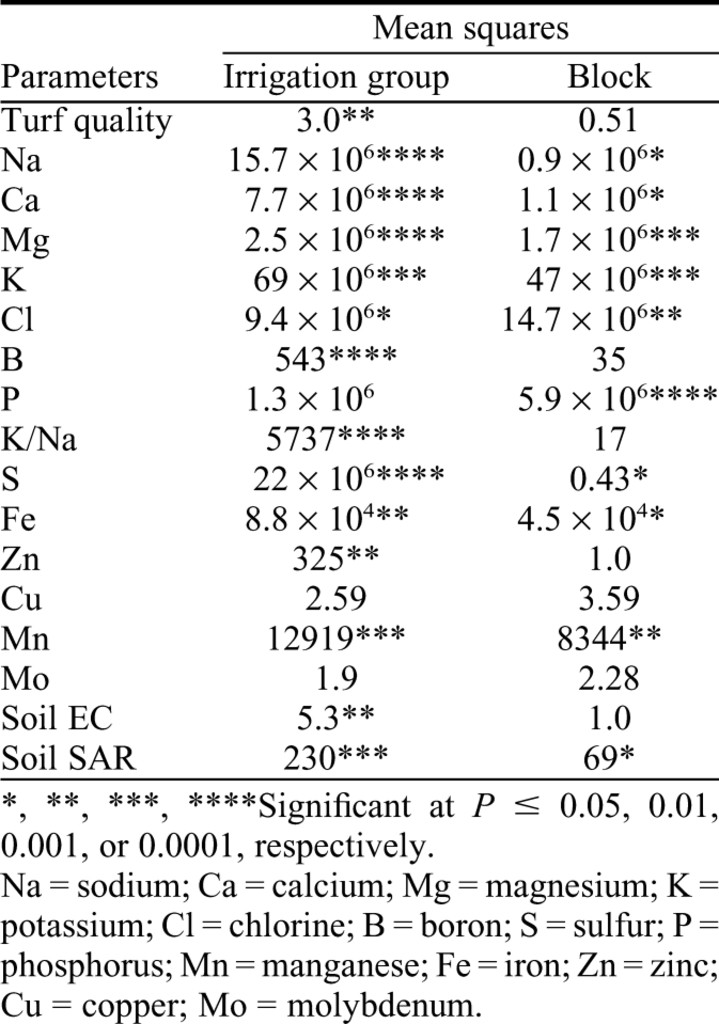 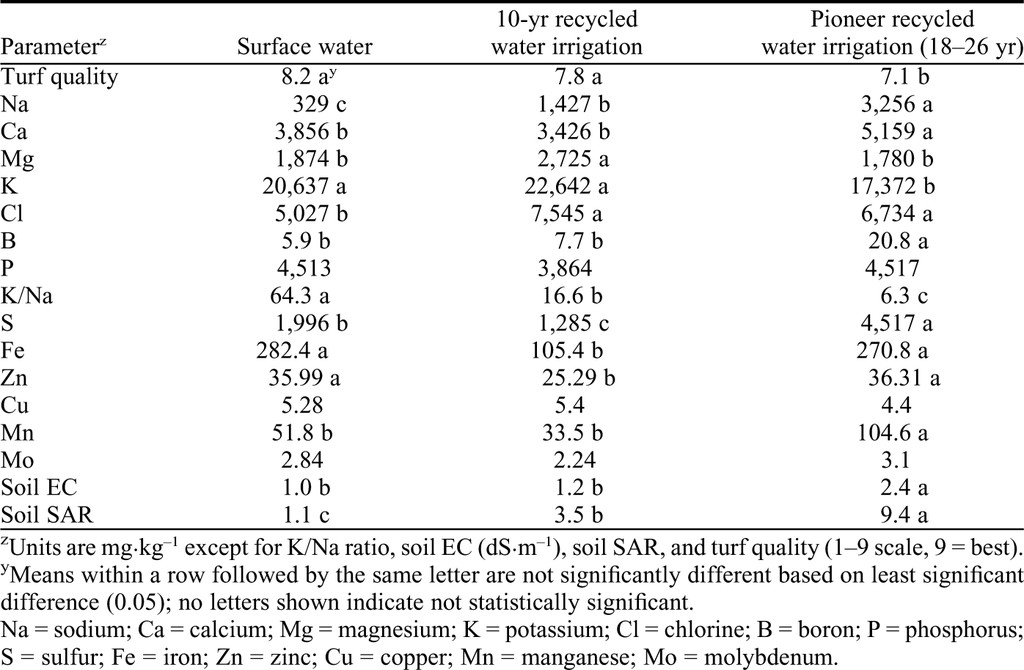 Turf quality and the relationship with shoot Na+ and K/Na ratio.

Under recycled water irrigation, KBG shoots accumulated Na, along with Cl and B. Although three elements (Na, B, S) and K/Na ratio showed greater correlation with turf quality, stepwise regression analysis revealed that, among all elements tested, the only mineral that significantly influenced on turf quality was Na (P < 0.05 and R2 = 0.65). Sodium posed negative effect (r = −0.81) to turf quality with a high significance level (P < 0.0001). The lowest turf quality ratings observed in the pioneer group coincided with its greatest Na concentration in KBG shoots in this group. The ratio of K/Na had positive correlation with turf quality, which was likely due to the competition between Na and K (Table 4). Metabolic toxicity of Na+ is partially a result of its ability to compete with K+ for binding sites essential for cellular function. More than 50 enzymes in plants are activated by K+, but Na+ cannot substitute in this role. Thus, high levels of Na+ or low K/Na ratio can disrupt various enzyme processes in the cytoplasm. The decline in KBG turf quality might be associated with the high concentration of Na competing with K for enzyme binding sites. Pearson correlation analysis indicated that shoot Na concentration negatively associated with K and K/Na ratio but positively correlated with B and S shoot concentrations (Table 4), which lead to the positive correlation between turf quality and shoot K concentration but negative correlation between turf quality and shoot B (r = −0.71, P ≤ 0.001) and S (r = −0.66, P ≤ 0.001) concentrations.

Reduction in K/Na ratio under recycled water irrigation was accompanied with turf quality decline (Tables 3 and 4). This finding was in agreement with previous published research (Qian et al., 2001, 2004; Wang et al., 2013). The same findings have also been highlighted in other papers on both cool season and warm season turfgrasses (Krishnan and Brown, 2009; Marcum et al., 1998).

Results from this study showed that as Na accumulated in the KBG exceeding 3500 mg·kg−1, turf quality decreased to a rating of 7.2 (Fig. 1). Carrow (2001) explained two physiological functions regarding how Na influences turfgrass growth: the first is causing ion toxicity to plant tissue and the other is causing an ion imbalance. KBG in the pioneer golf courses had an average Na level of 3256 mg·kg−1 in the shoots and displayed a lower turf quality. ‘Brilliant’ KBG had shoot Na of 4289 mg·kg−1 when treated with saline irrigation water at 3 dS·m−1 and mowed at 50 mm height in a greenhouse study (Wang et al., 2013). This level of shoot Na concentration was represented for samples collected at one of the pioneer recycled water irrigation golf courses in this study.

Soil SAR in the pioneer group was 9.4, greater than the 10-year group, with an average SAR value of 3.5. Soil from the surface water irrigation site had the lowest average SAR value of 1.1 (Table 3). There was a significant linear relationship (R2 = −0.49, P ≤ 0.0001) between turf quality and soil SAR. As discussed previously, shoot Na concentration linearly influenced turf quality with R2 value of 0.65 (Fig. 1). The surface soil SAR showed a logarithm nonlinear relationship to shoot Na concentration (R2 = 0.75, P ≤ 0.001) (Fig. 2). Soil SAR values of both recycled water irrigation groups were greater than the surface water irrigation group. KBG with lower turf quality (courses in the pioneer group) had greater shoot Na concentration and greater SAR in the topsoil (0–20 cm). 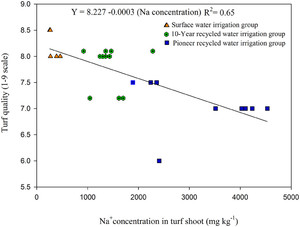 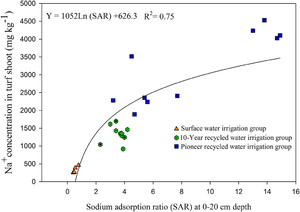