Walnut (Juglans regia) is one of the oldest cultivated fruits and an economically important tree, now widely cultivated in temperate regions for both its nuts and timber (Chen et al., 2014). In China, this species has been cultivated for at least 2000 years (Xi and Zhang, 1996), and in the late 1980s, the first batch of precocious walnut cultivars was released. These cultivars can begin to bloom within 1 year of planting, entering the full fruiting period 5 years later, thereby offering another advantage in the form of thin-shelled nuts and high yield favored by the majority of growers and consumers (Germain et al., 1995; Pei and Lu, 2011; Vahdati and Mohseniazar, 2015). However, across China, most walnut trees were planted in shallow hilly areas, where the soil layer is thin and dry. The precocious walnut has high susceptibility to bacterial blight (Germain et al., 1995). Furthermore, the extremely early fruiting onset of substantial nuts broke the balance between tree vegetative growth and reproduction, leading to premature aging and greater susceptibility to pests and diseases, thereby restricting the benefits of precocious walnuts cultivars (Song et al., 2016). Most species of Juglans are interfertile. Through interspecific hybridization, a series of commercial hybrid rootstocks possessing tolerance to soil-borne diseases has been extensively used for walnut production in California (Potter et al., 2018; Vahdati et al., 2002; Zhu et al., 2019). Rootstock breeding studies have been relatively backward in China. To resolve this problem, we started a distant crossbreeding program, using Juglans regia, Juglans hindssii, Juglans nigra, and Juglans major as breeding parents, with the goal of breeding excellent walnut rootstocks for walnut industry growing in China.

‘Zhong Ning Sheng’ (ZNS) is the result of a cross between JH-8202 (Juglans hindsii) and LNJR-01 (Juglans regia) performed at a seedling field in Luoning County, Henan, China. The objective of the breeding program was to breed rootstocks with high vigor and resistance. JH-8202 is vigorous and has a high yield. LNJR-01 is a native superior individual with high resistance to various pests and diseases. In 1982, the University of California–Davis gifted Northern California walnut (Juglans hindsii) scions to the Research Institute of Forestry of the Chinese Academy of Forestry. In 1990, through artificial pollination, nearly 500 hybrid F1 seeds were obtained. Then, from 1991 to 1993, after preliminary phenotypic identification and screening, 16 strong seedlings were selected from 56 hybrid seedlings (candidate pool). From 1994 to 1999, one seedling was selected based on its growth performance and pest and drought stress resistance. From 2005 to 2017, after their propagation, the resulting plants were cultivated and monitored for their field performance in the Henan, Hebei, Shandong, Hubei, Chongqing, and Fujian provinces (Table 1). All propagated plants showed a stable and consistent phenotype with high grafting affinity to walnut, strong growth potential, high drought resistance, and high resistance to pest and disease. Consequently, in 2015, the new cultivar ‘ZNS’ was designated by the State Forestry Administration of the People’s Republic of China (Beijing, China) as certificate no. 20150059. In 2018, this new cultivar was officially authorized for its release and use as ‘ZNS’ by the Forestry Variety Certification Committee of the State Forestry and Grassland Administration (under accession no. S-SV-JH-014–2018).

‘ZNS’ has strong vigor, compact tree architecture, and strong sprouting ability. Bark is light gray and split into narrow rough ridges. Twigs are green and smooth. The leaves are odd pinnate compound leaves that are 20–60 cm with a petiole of 4.0–9.5 cm. There are 9–15 leaflets that are yellow–green, lanceolate or oblong lanceolate, symmetric or falcate, and 6.5–13.5 cm × 2.5–5.0 cm. The margins are serrate, the apex is narrowly acuminate, and the terminal leaflets are well-developed. Terminal buds are conic and flattened. Few flowers and fruits are present. Staminate catkins are 5.0–9.0 cm. Fruits are subglobose or long ovoid, smooth, and densely covered with capitate glandular hairs and peltate scales. Nuts are ovoid and light brown. The fruit tip is slightly pointed and the fruit base is flat. Fruit has an average longitudinal diameter of 2.2 cm, average transverse diameter of 1.6 cm, and average lateral diameter of 1.6 cm; it is shallowly longitudinally grooved, and the surface between grooves is coarse and warty.

In the Luoning County area of Henan Province (111°08′E–111°49′E to 34°05′–34°38′N), budbreak of ‘ZNS’ begins in late March, which is almost at the same time as that of Juglans hindsii and 5–7 d later than Juglans reiga; leaf expansion occurs in early April. The female flowers open in late April, 5–7 d later than those of J. regia. Crown leaf fall starts in late November.

‘ZNS’ showed good grafting affinity with walnut, with apparently no significant difference from that of walnut seeding rootstock; both were >96% (Table 2). Compared with walnut rootstock, ‘ZNS’ as a rootstock significantly improved the growth potential of the whole tree (Fig. 1 E), enhanced its resistance to pests and diseases, and delayed premature senescence of precocious walnuts linked to early fruiting of large crops of nuts (Song et al., 2016). Therefore, we concluded that ‘ZNS’ may be used as an excellent walnut rootstock. In terms of the growth rate, both tree top height and diameter at breast height (DBH) indicators of ‘ZNS’ exceeded those of their parents by >11%.

Comparison of two different walnut rootstocks on survival after grafting. 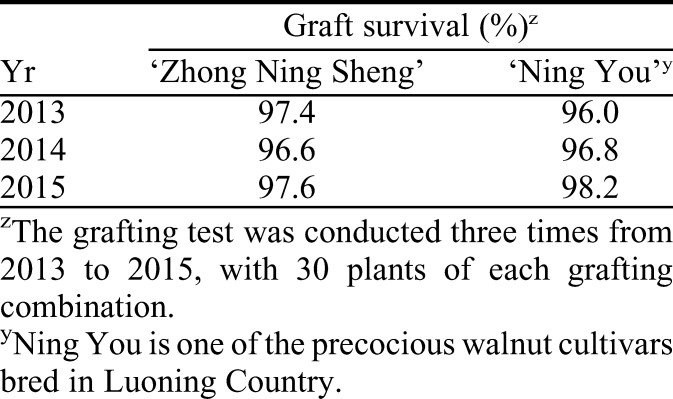 Beyond those traits, ‘ZNS’ also has excellent material properties (Table 3), especially in terms of air dry density, absolute dry density, bending strength, and end-face hardness. Its wood quality index is significantly better than that of the male parent (J. hindsii), suggesting it could also be used as a precious high-quality timber species. ‘ZNS’ features strong asexual reproduction ability, with a rooting prevalence of >95% attainable by the cutting propagation technique of walnuts (Pei et al., 2005). Finally, ‘ZNS’ also has many of the same characteristics as tall trees, such as beautiful architecture and crown form, yellow–green leaves, and exuberant foliage with few flowers and fruits. This new walnut cultivar also shows promising potential as a border/fence tree or for use in landscaping.

Refer to the patents of Pei et al. (2005). The main technical procedures of cutting propagation are as follows: a) new tips of donor plants were used as scions and grafted to the annual rootstocks through bud grafting; b) grafted plants were horizontally laid in the sand pit of the greenhouse and covered with sand; c) after the germination of buds on the mother plant, the new tips were removed and used as the cuttings (half-lignification state, 5–7 compound leaves expanded); and d) the cutting bases were dipped in the anhydrous ethanol IBA solutions (5 mg/mL) for 2–3 s. Then, the cuttings were placed in the root-induced matrix [vermiculite: peat soil = 2:3 (v/v)] and incubated in the greenhouse (temperature, 25 to 35 °C; relative humidity, 85% to 98%).

Propagation rights of ‘ZNS’ are owned by the Research Institute of Forestry of the Chinese Academy of Forestry in Beijing, China. Information about the plant material and research of ‘ZNS’ can be obtained from the first author (xiaobo.song@caf.ac.cn). 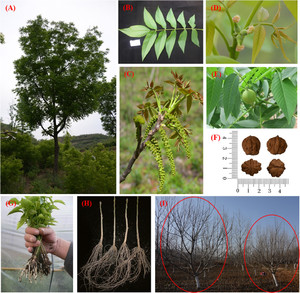