The leading strawberry (Fragaria ×ananassa) grown in Florida is currently ‘Florida Radiance’ (Chandler et al., 2009; U.S. Patent PP20,363), which was commercialized in 2009 and accounted for ≈50% of the acreage in west central Florida in 2018. This cultivar is preferred for its early and total yields; uniformly shaped, medium-sized and attractive fruit; and open plant architecture and long stems, which allow for efficient harvesting. Sweet Sensation® ‘Florida127’ (Whitaker et al., 2015; hereafter referred to as ‘Florida127’; U.S. Patent PP25,574) is currently the second leading cultivar with ≈25% of the acreage in 2018–19. This cultivar complements the traits of ‘Florida Radiance’ with its large fruit size, excellent flavor and aroma, and robust plant. Although both leading cultivars have higher yields in late November and early December than previous cultivars, there is a pressing need for continued increases in early yield. Average prices have decreased during the Florida market window from late November through March in recent seasons, primarily due to Mexican imports (Wu et al., 2015). Thus, Florida growers must take maximum advantage of high prices at the beginning of the season when market supply is lowest.

‘Florida Brilliance’ strawberry originated from a 2013 cross between unreleased selection FL 11.31-14 (female parent) and unreleased selection FL 10-153 (male parent) (Fig. 1). FL 11.31-14 was chosen as a parent for its yield, shape, and fruit firmness, whereas FL 10-153 was chosen primarily for its disease resistance and uniform fruit color. Winterstar™ ‘FL 05-107’ is both a maternal and paternal grandparent, contributing early yield and desirable plant architecture, whereas the other grandparents arose from diverse pedigrees (Fig. 1). Seeds from this cross were germinated and seedlings evaluated during the 2013–14 season. ‘Florida Brilliance’ was evaluated as advanced selection FL 13.26-134 in 2014–15 in a clonally replicated small-plot test where it was noted for high early yields and a high percentage of marketable fruit.

During the 2015–16, 2016–17, and 2017–18 seasons, yield and fruit quality data were collected from a replicated trial conducted at the GCREC. Field plots were prepared and maintained according to current commercial practices for annual strawberry plasticulture in Florida. Beds were spaced 1.2 m on center and were 90 m long, 70 cm wide, 15 cm high at the edges and 18 cm high in the center; they were covered with a single layer of black, high-density polyethylene mulch. Preplant fumigation consisted of a 65:35 mixture of 1,3-dichloropropene and chloropicrin (Telone C35, Dow AgroSciences). Each bed contained two rows of plants spaced 38 cm apart within rows and 28 cm apart between rows within beds. All trials were conducted using bare-root plants. Five replicate plots (10 plants per plot) of each genotype were planted in a randomized complete block design at the GCREC. The trials were planted between Oct. 9 and 11 in each year; the commercial planting period ranges from ≈25 Sept. to 20 Oct. Overhead irrigation from impact sprinklers was applied for plant establishment during daylight hours for up to 10 d after transplanting, after which water and fertilizer were applied exclusively through a single drip tape.

All ripe fruit (at least three-quarters red) were harvested, graded, counted, and weighed twice a week from December through March. Fruits that were diseased, misshapen, small (<10 g), or rain damaged were considered unmarketable, and the remaining fruit were weighed to determine the marketable yield in grams on a per plant basis. Fresh fruit were transported by air-conditioned vehicle to the U.S. Department of Agriculture Agricultural Research Service, U.S. Horticultural Research Laboratory in Fort Pierce, FL, once each month for flavor evaluations by a trained sensory panel and measurement of soluble solids content (SSC), pH, titratable acidity (% citric acid equivalents), and firmness on fruit from the same field plots previously described (Plotto et al., 2013). Two to three hundred fruit of each cultivar from a separate GCREC field were also transported to the Food Science and Human Nutrition Department of the University of Florida in Gainesville, FL, for consumer sensory evaluation. The ratings of more than 100 untrained panelists were collected for overall acceptability, texture acceptability, flavor intensity, sweetness intensity, and sourness intensity using the methods and rating scales of Ubeda (2011) and Kalva et al. (2014). Commercially packed fruit in 1-lb (454-g) plastic containers were also transported on three dates in 2016–17 and 2017–18 to the Food Quality Laboratory of the University of South Florida for analysis of quality attributes over time during cold storage at 1 °C and 85% relative humidity. Weight loss and quality ratings were collected using previously published methods (Nunes and Emond, 2007; Nunes and Delgado, 2014).

In all statistical analyses blocks were considered as fixed effects, and mean separations were only performed if genotype effects were significant. Residuals were checked for normality and homogeneity, and percentage data were modeled with GLIMMIX using logit link functions and binomial distributions.

‘Florida Brilliance’ is a short-day strawberry adapted to annual plasticulture growing systems for winter and early spring production. The plant is moderately compact with open architecture, allowing air movement and visualization of the fruit (Fig. 2). Long pedicels allow the fruit to be easily harvested. ‘Florida Brilliance’ produces moderately firm and juicy fruit that are broad-conic in shape with a medium-green (colorimeter L* = 37.7, a* = –14.4, b* = 18.8) calyx that is slightly reflexed. The redness of the fruit is medium externally (a* = 34.7), with moderate internal redness (a* = 22.7) similar to ‘Florida Radiance’. The achenes are notably sunken, deeper than the commercial standards, resulting in a glossy appearance due to curvatures of the skin that reflect light in many directions. Fruit size is medium-large, with average fruit weight between ‘Florida Radiance’ and ‘Florida127’ (Table 1).

Marketable yield and average fruit weight of ‘Florida Brilliance’, ‘Florida127’, and ‘Florida Radiance’ at the University of Florida Gulf Coast Research and Education Center at Wimauma, FL, during three seasons.

Consumer sensory ratings for ‘Florida Brilliance’, ‘Florida127’, and ‘Florida Radiance’ based on the ratings of >100 untrained panelists on 7 Feb. and 14 Feb. 2017. 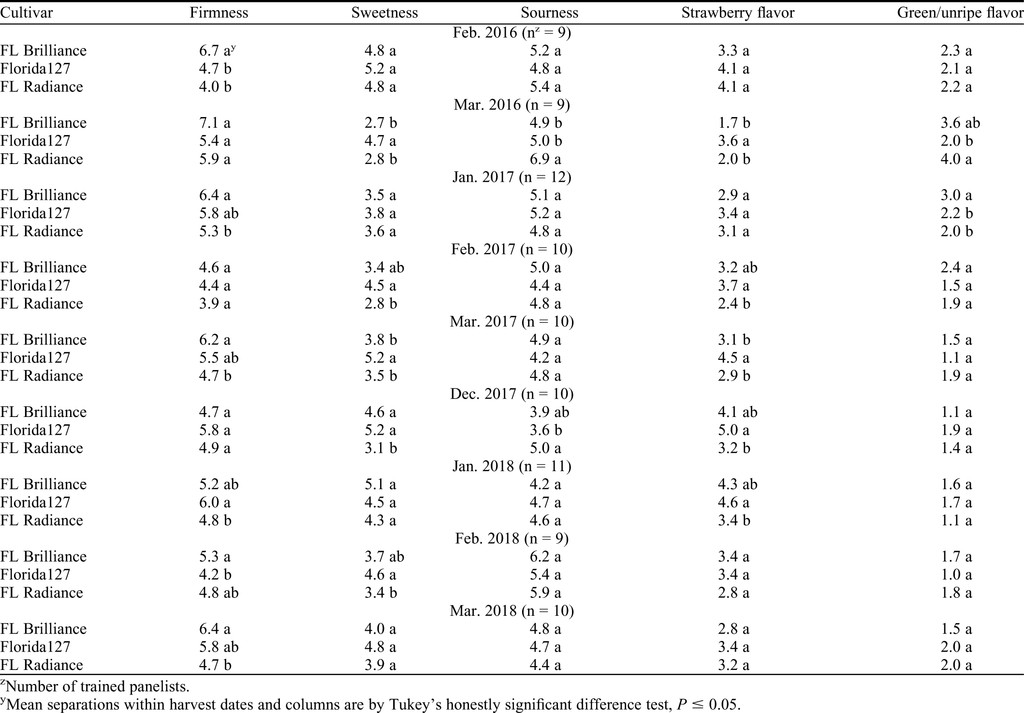 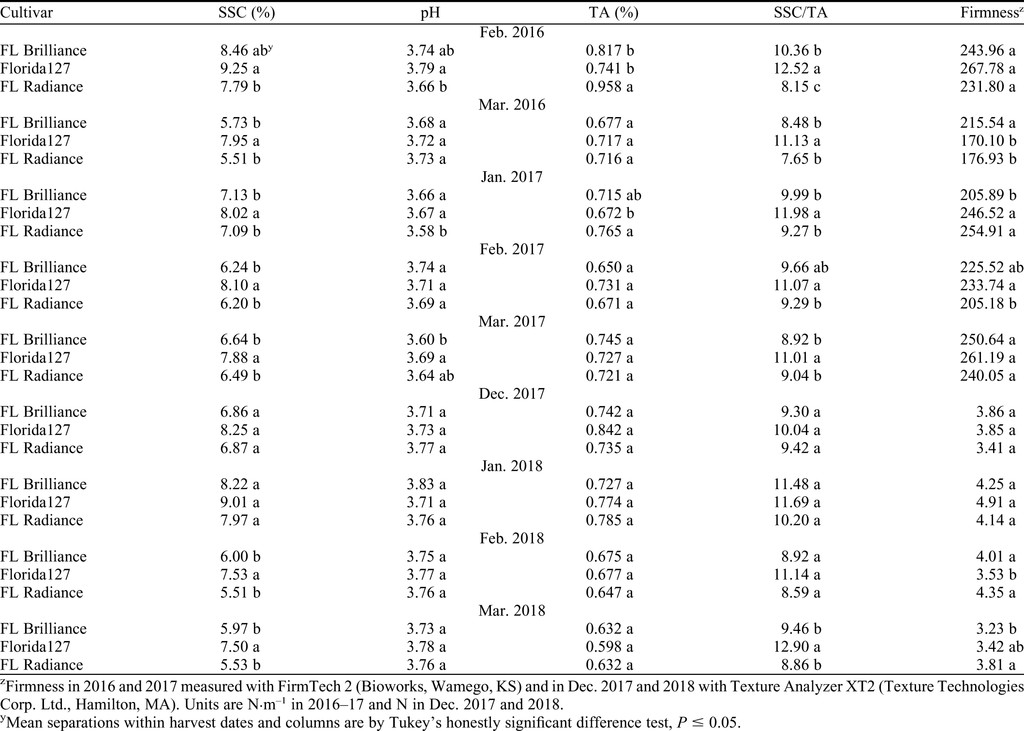 Rankings of fruit weight loss for the three cultivars varied with harvest date when cold stored for 9 d. Overall, ‘Florida Brilliance’ had lower weight loss compared with the commercial standards and showed less shriveling of the fruit surface and calyx than ‘Florida Radiance’ and ‘Florida127’ (data not shown).

In replicated trials, early and total yields of ‘Florida Brilliance’ were higher than ‘Florida Radiance’ in both seasons in which they were tested together, whereas November yields were significantly higher than for ‘Florida127’ in two of three seasons (Table 1). Temperatures from October to December in 2015–16 were higher on average than in 2016–17, contributing to overall lower yields during this year. Thus, the fall temperatures in the first year of testing were more similar to that experienced on an earlier planting date. An on-farm trial with a planting date of 25 Sept. 2016 was established to test the suitability of ‘Florida Brilliance’ for early planting, in which it had higher early and total yield than ‘Florida Radiance’ (Fig. 3). Although elongated, unmarketable fruit were observed for ‘Florida Radiance’ in November and December, ‘Florida Brilliance’ maintained an exceptionally consistent conical shape throughout the season in all trials.

‘Florida Brilliance’ was approved for release by the Florida Agricultural Experiment Station in 2017. U.S. Patent PP30,564 was granted in 2019. Plant breeder’s rights applications have been filed in foreign territories. Information on nurseries licensed to propagate this cultivar can be obtained from Florida Foundation Seed Producers, Inc., P.O. Box 110200, Gainesville, FL, 32611 (http://ffsp.net).

Pedigree of ‘Florida Brilliance’ strawberry. The female parent is listed on the upper side of each bifurcation.

Plants and fruit of ‘Florida Brilliance’ strawberry on Dec. 2016 on a farm near Plant City, FL.

Marketable yield of ‘Florida Brilliance’ and ‘Florida Radiance’ in a replicated, on-farm trial (two replications with 250 plants/rep) near Plant City, FL, during the 2016–17 season, with a planting date of 25 Sept. 2016. One flat = eight 454-g plastic containers. Bars represent standard errors. 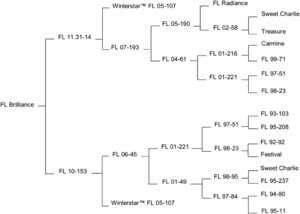 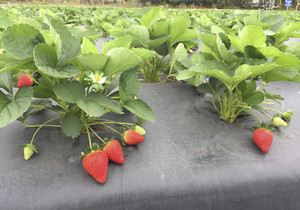 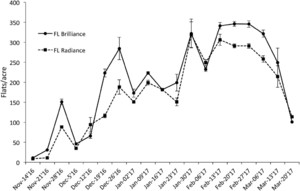