Spinach has always been known as a green leafy vegetable. Although there are some plants called “red spinach,” they are usually red-leaf amaranth (Amaranthus spp.) or other species (e.g., Blitum rubrum), not true spinach (Spinacia oleracea). There are currently some “red” true spinach cultivars on the market, but the red coloration is limited to the veins of the leaves. In this article, the development of ‘USDA Red’, the world’s first true spinach variety with red color on the surface of the leaves, is described.

Spinach consumption (and production) in the United States decreased from 2.3 pounds per person to 1.6 pounds during the year following an Escherichia coli outbreak in 2006, and it has not fully recovered (NASS, 2015, 2018). Red spinach will bring some excitement to the spinach market and help attract consumers. Furthermore, it may help increase the consumption of spinach and aid in fighting the obesity epidemic. The obesity rate has climbed to 39.6% of American adults, 42.8% among those aged 40–59 (Hales et al., 2017), costing more than $147 billion per year for the treatment of illnesses related to obesity (Finkelstein et al., 2009). Unhealthy diets are a direct cause of being overweight, but efforts by public health organizations and the produce industry to increase the consumption of fruits and vegetables have had limited success due to dietary habits and economic or cultural reasons.

Enhanced nutritional levels of vegetables would improve the nutrient intake without requiring an increase in consumption. Spinach is one of the most desirable leafy vegetables due to its high content of β-carotene (provitamin A), lutein, folate, vitamin C, calcium, iron, phosphorus, and potassium. The red color of ‘USDA Red’ comes from betacyanin, which exists in the family of Amaranthaceae, instead of the more common anthocyanin (Ali et al., 2009). Betacyanin is a potent antioxidant that can scavenge excessive reactive oxygen species and free radicals that attack proteins, lipids, and DNA, consequently leading to damage and dysfunction of enzymes, cell membranes, and genetic material (Stintzing and Carle, 2004). Betacyanin has been shown to significantly reduce oxidative stress in patients and may help in preventing chronic pathologies, inflammation, and cancer (Stintzing and Carle, 2004; Sumaya-Martinez et al., 2011). Therefore, betacyanin adds another benefit to a plant already loaded with phytonutrients, making spinach a true “super food.”

Red spinach can be used as baby or “teen” leaf in salad bags (alone or in mixtures with other vegetables), bunched products, and spring mix for fresh-market consumption, or as processed products (frozen or canned). The red color in spring mix is now provided by red lettuce, radicchio, or chard, and red spinach will give processors another choice. Ultimately, the consumers will have access to new vegetable products to benefit their health and well-being.

‘USDA Red’ is a semi-flat type of spinach with a medium growth rate and semi-erect leaves. Its leaves are spade-shaped with round-pointed tips and purple-red veins and petioles. There may be one or two indents on both sides of the leaf blade. As the dark green leaves grow, purple–red color (59A, Red–Purple Group, the Royal Horticultural Society (RHS) Color Chart, London, UK) develops from the lower part of the leaves (Fig. 1) and may cover the entire upper (adaxial) surface (Fig. 2). The lower leaf (abaxial) surface remains green. Its taste is mild and bland, similar to other spinach cultivars. It has a monoecious flowering habit and produces smooth seeds. Compared with other varieties, it has moderate resistance to bolting.

‘USDA Red’ was planted in a field at the experiment station of the USDA in Aug. 2015, Aug. 2016, Aug. 2017, and Aug. 2018 in Salinas, CA, to evaluate its horticultural and nutritional traits. A green-leaf spinach cultivar, Polar Bear (Rijk Zwaan, De Lier, Holland), and two red-veined cultivars, Bordeaux and Red Deer (Rijk Zwaan), were included in the trials. The experiment design was a randomized complete block with four replications. Each plot consisted of 50 plants of a genotype, with 30 cm between plants and 35 cm between rows on 1-m wide double-row beds. Ten plants were randomly selected from each plot to measure petiole length, spread (diameter of the plant), (fully developed) leaf number, plant height (from ground to the tip of the tallest leaf), and plant weight (excluding roots) for each plant (not all these traits were evaluated during each trial). Per-plant values were averaged and an analysis was conducted on the plot mean basis. Data were analyzed by an analysis of variance using the general linear model procedure of JMP (SAS Institute, Cary, NC), with genotypes as fixed effects and replications as random effects. For comparisons between genotypes, least significant differences were calculated with an error rate of P = 0.05.

The petioles of ‘USDA Red’ were shorter than those of the two red-veined cultivars Bordeaux and Red Deer, but they were similar to those of ‘Polar Bear’ (Table 1). ‘USDA Red’ had shorter plants with smaller spread than other cultivars. Its leaf number was similar to that of other cultivars. The plant weight of ‘USDA Red’ was lower than that of ‘Polar Bear’ and ‘Red Deer’, but higher than that of ‘Bordeaux’. These traits were collected from all genotypes during a trial on the same day. ‘USDA Red’ is an open-pollinated variety, whereas the other three are F1 hybrid cultivars that may develop faster due to hybrid vigor.

Leaf samples were collected from randomly selected plants in each plot of the aforementioned field trials for nutritional analyses. Antioxidant capacity and concentrations of chlorophyll, total phenolics, flavonoid, and betacyanin were measured as described previously (Xu and Mou, 2016). Leaf samples were also shipped to a commercial analytical laboratory (Medallion Laboratories, Minneapolis, MN), where β-carotene was analyzed by high-performance liquid chromatography (HPLC-UV/VIS, AOAC Method 2005.07) and ascorbic acid concentration was determined with a fluorescence spectrophotometer (AOAC Method 967.22 and 984.26). For mineral analysis, leaf samples were weighed and then dried in an oven at 65 °C for 48 h. Dried samples were digested according to the method described by Jimenez-Aguilar and Grusak (2017). Mineral concentrations were determined by inductively coupled plasma optical emission spectroscopy (iCAP 6500 Duo; Thermo Electron North America LLC, West Palm Beach, FL). 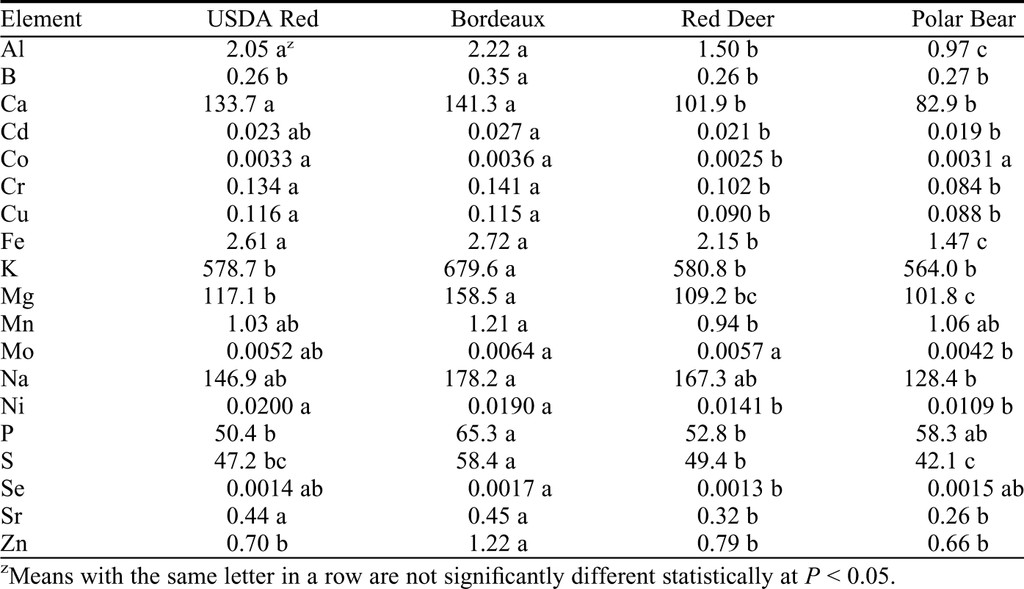 ‘USDA Red’ is released unconditionally, with no warranty given regarding its performance or adaptation under specific environmental or cultural conditions. A Plant Variety Protection (PVP) application is pending and it will become available for licensing. Interested parties should contact: USDA, Agricultural Research Service, Office of Technology Transfer, 5601 Sunnyside Avenue, Room 4–1159, Beltsville, MD 20705–5131, Phone: (301) 504–5989, Fax: (301) 504–5060, E-mail: license@ars.usda.gov.

A plant of spinach variety ‘USDA Red’ in the field with the purple–red color developing from the lower part of the leaves.

A plant of spinach variety ‘USDA Red’ in the field with purple–red color covering the entire upper leaf surface. 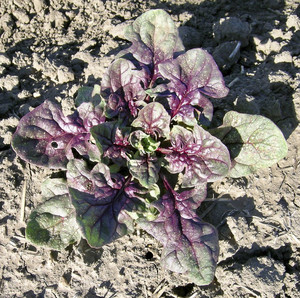 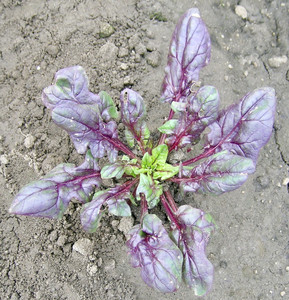