‘RubyS’ (Malus domestica Borkh.) apple cultivar was developed from Korean Apple Breeding Program, at Apple Research Institute, National Institute of Horticultural & Herbal Science (NIHHS), Rural Development Administration (RDA), Republic of Korea and then commercially released as a new apple cultivar in 2014. ‘RubyS’ was selected from a hybrid between ‘Alpsotome’ and ‘Sansa’ cultivars. Fruit maturity is reached in the middle of August. Fruit are high quality small dessert apples with excellent storability and marketability. In addition, fruit are very attractive and flavorful. ‘RubyS’ cultivar is higher in fruit weight and yield than ‘Alpsotome’. Fruit shape and overall peel color coverage of ‘RubyS’ are ‘conic’ and ‘red’, respectively. Moreover, there was no preharvest fruit drop in ‘RubyS’ even though fruit drop was high in ‘Alpsotome’, the mother parent. The fruit flesh is cream-colored, aromatic, crispy, and juicy. Flesh firmness of ‘RubyS’ is 78.2 N at harvest, similar to that of ‘Alpsotome’. The soluble solids content is higher in ‘RubyS’, compared with ‘Alpsotome’. Suitable pollinizers for ‘RubyS’ cultivar are ‘Golden Delicious’, ‘Gala’, and ‘Fuji’. The fruit quality, in terms of firmness, juiciness, and flavor, was retained fairly well during long-term cold storage. ‘RubyS’ showed strong resistance to the most serious apple pests and diseases as does ‘Alpsotome’ cultivar and is self-thinning as well. Overall, the results indicated that tree characteristics and fruit quality of ‘RubyS’ apples are highly desirable in terms of fruitlet self-thinning ability, fruit sweetness, storability and low preharvest fruit drop, compared with those of ‘Alpsotome’ cultivar. In summary, ‘RubyS’ is a promising small apple cultivar.

The RubyS cultivar was selected among 320 seedlings that were originated from a cross between Alpsotome and Sansa cultivars (Fig. 1). Parental forms were crossed in 2004. The seedling resulting in ‘RubyS’ plants was selected in 2014 and then registered in 2016 in the Republic of Korea. The selections were propagated by grafting on apple rootstock M.9. The selections were evaluated for 5 consecutive years (5 to 9 years of tree age) in Gunwi (36°16′ N, 128°27′ E, elevation 71 m), Republic of Korea. The soil of the experimental orchard at a depth of 0 to 50 cm was a clay loam, slightly acidic (pH 6.5), with low (2.21%) organic matter content. Maximum day air temperature is 36.6 °C in August, and minimum day air temperature is –16.7 °C in January at the experimental orchard.

As the parents of ‘RubyS’, the seed parent ‘Alpsotome’, produced in Japan, was selected in 1964 as an open-pollinated seedling of ‘Fuji’ by Hatagoshi, a private breeder (Soejima et al., 1998). ‘Alpsotome’ cultivar is a very small apple with an average fruit fresh weight of 37 g, which is high in soluble solids content and has fruit storability and palatability. Small size apple fruit have utility for school meals, baking, snacks, and other uses because apple consumers may prefer to have a small “snack-size” apple rather than regular-size apples, leading to increased demand and marketability. However, before ‘RubyS’, no small-size apple cultivars were commercialized that had little or no preharvest fruit drop and high storability and marketability. ‘Alpsotome’ is widely used as the pollinator of different varieties but is not compatible to use with ‘Fuji’, which is the most cultivated apple in Korea, because the self-incompatibility genes are the same in the two genotypes (Shogo et al., 2008). In contrast, pollen parent Sansa, bred in 1987 in Japan, is an early season apple cultivar with high palatability, juiciness, no preharvest fruit drop, and excellent storability. Furthermore, it is strongly resistant to bitter rot (Yoshida et al., 1989). S-genotype of ‘Sansa’ is S5S7 (Shogo and Kotakara, 2000) and thus highly cross-compatible with ‘Fuji’ (S1S9) and ‘Hongro’ (S1S3) cultivars (Heo et al., 2011). Furthermore, it is good enough to be used as a pollen tree due to the high amount of pollen yield (Heo et al., 2011). Nonetheless, the preference and popularity of ‘Sansa’ apples have decreased in Korea due to general lower tree vigor, fruit weight, fruit yield, and production (MAFRA, 2015). Therefore, to overcome ‘Alpsotome’ limitations of having severe preharvest fruit drop and poor shelf life, it was bred with ‘Sansa’.

The proposed cultivar RubyS was described per the UPOV standard protocol (UPOV, 1994). ‘RubyS’ tree grows well in fertile, acidic, well-drained sandy soils and loams, which are typical for apple cultivation (Barden and Neilsen, 2003). Grafted on M.9 rootstocks, ‘RubyS’ trees show low vigor and a tree height of ≈2 m (Fig. 2). Because the tree shape is a slender spindle, semidwarf rootstocks are recommended, such as M.7 at conventional apple orchards. ‘RubyS’ scions grafted with M.7, MM.106, and MM.111 rootstocks were normally responded without any symptoms of incompatability, such as swelling at the union. First fruiting occurred when trees were in their second year. In the southern region of South Korea, ‘RubyS’ starts flowering ≈1 to 3 d after ‘Alpsotome’, depending on the orchard locations and weather conditions. Full bloom of ‘RubyS’ occurs between 20 and 22 Apr. (data from 3 years) and 10 and 20 Apr. for ‘Alpsotome’ and ‘Sansa’, respectively. A predominant color at balloon stage is light pink; petal diameter pressed into a horizontal position is 38.6 mm in ‘RubyS but 42.7 mm and 51.8 mm in ‘Alpsotome’ and ‘Sansa’, respectively; arrangement of petals is overlapping in ‘RubyS’ but intermediate in ‘Alpsotome’ and ‘Sansa’ apples (Table 1). The self-incompatible genotype of ‘RubyS’ is S5S9 (Fig. 3). Therefore, it is possible to use pollen for pollination with ‘Gala’ (S2S5), ‘Golden Delicious’ (S2S3), and ‘Fuji’ (S1S9). On average, leaf size is 75.7 mm in length and 48.1 mm in width (Table 1).

Fruit produced from ‘RubyS’ are small, only 53.7 mm in length and 59.4 mm in diameter (Table 2). The fruit length-to-diameter ratio is intermediate; fruits show conic shape; ground color is yellow-green; and skin is smooth, without russeting, shiny, of medium thickness, and 80% to 100% covered with red, flushed blush (Fig. 2). Medium-sized numerous lenticels are spread out over the fruit peel. Fruit ribbing and crowning at the calyx end of the fruit are absent. Size of the eye of fruits is small, and the length of the fruit sepal is short. Length and thickness of fruit stalks are medium (28.7 mm) and thin (1.9 mm), respectively. The flesh is creamy, crunchy, juicy with a delicate aroma, and firm (78.2 N). Soluble solids content of the fruit is 14.5%, and titratable acidity as malic acid is 0.53%. The cultivar shows no preharvest fruit drop. These traits make ‘RubyS’ attractive and distinctive from other small apple cultivars. 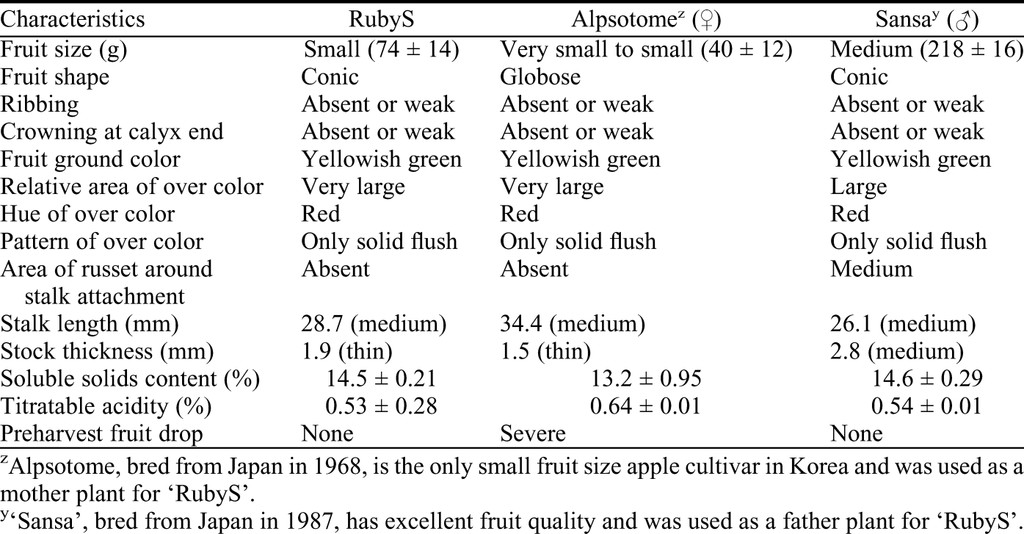 ‘RubyS’ apples can be harvested 5 d earlier than ‘Gala’, at the end of August. Although fruit can ripen homogeneously under tree canopy, two pickings are recommended, depending on variability fruit maturity. The fruit produced by ‘RubyS’ do not show any preharvest drop and their storage performance is good. The results of a preliminary study showed that fruit could be stored for at least 6 months at 1 °C. Fruit firmness after cold storage was in the range of 50 to 55 N. Peel shriveling and natural wax production were not observed during cold storage or shelf life. Adequate flesh firmness may last for a long time, even during shelf life.

Fruit are produced abundantly as both terminal and axillary flower buds have high fruit production (Table 3). As an extreme early summer apple cultivar, ‘RubyS’ had high fruit cropping. ‘RubyS’ has a characteristic self-thinning ratio of 53.1% (Table 4). Therefore, producers must be cautious about thinning method and timing.

Given the present results, ‘RubyS’ is relatively resistant to major pests and diseases of apple trees and fruits, including apple leaf miners (Phyllonorycter ringoniella M.), European red mite (Panonychus ulmi K.), Alternaria blotch (Alternaria mail R.), and powdery mildew [Podosphaera leucotricha (Ell. and Ev.) Salm.], as is the cultivar Alpsotome. However, ‘RubyS’ was highly resistant to Alternaria blotch, bitter rot, and powdery mildew as is ‘Fuji’. In addition, resistance to white rot was higher in ‘RubyS’ than in ‘Fuji’ (Table 5).

The RubyS cultivar has been registered to the Korea National List of Fruit Plant Varieties by Korea Seed and Variety Service Center for the evaluation of cultivar. The exclusive license for propagating and selling certified plant material of ‘RugyS’ was obtained by the Rural Development Administration in Korea. Budwood was made commercially available in 2015.

Pedigree and timeline of breeding procedures used in the development of RubyS apple cultivar.

Self-incompatibility gene bands of RubyS and its parent cultivars. 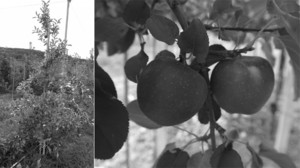