Effect of Oyster Shell Supplementation to the Culture Medium on Anthocyanin Content in the Spathe of Anthurium andraeanum Lind.

Anthurium andraeanum Lind. (Araceae) is an economically important tropical potted and fresh-cut ornamental flower species (Dufour and Guerin, 2003). Studies have shown that reduced light intensity under conditions of excessive shading or prolonged low temperature and rainfall in cultivation facilities leads to the fading of the spathe (Li et al., 2015; Wang et al., 2012), which seriously impacts the quality and marketability of A. andraeanum flowers (Chang et al., 2012).

A significant correlation was previously found to exist between Ca content in A. andraeanum and spathe discoloration, and exogenous Ca supplementation could significantly alleviate the symptoms of spathe discoloration (Henny and Hamilton, 1992; Higaki et al., 1980). Anthocyanins, as flavonoid pigments that contribute red, purple, and blue coloration to plants, are one of the key factors determining the color of the spathe of Anthurium. Research shows that PAL activity is positively correlated with anthocyanin content. Light can induce an increase in PAL activity (Xia and Cai, 2004), while Ca has been found to be positively associated with PAL and can thus produce the same effect as light. This finding implies that Ca can be used instead of light to stimulate increases in PAL activity, which might then result in the elevated production of anthocyanins.

Oyster shells are a solid waste byproduct of the mariculture industry and are composed of more than 90% calcium carbonate, thus providing a valuable Ca resource (Teng et al., 2019). Calcium carbonate can provide a good source of exogenous Ca in the soilless cultivation of A. andraeanum and can be used in the cultivation matrix. Oyster shells have a naturally porous surface and good solubility, adsorption, and chemical activity (Liu, 2004), and can adsorb ammonium nitrogen (NH4+−N). The use of oyster shell in the preparation of slow-release nitrogen fertilizer (Miao et al., 2007) can also alleviate the loss of N. The soilless cultivation of A. andraeanum using oyster shells depends on the size of the oyster shell fragments and the pH value of the solution. These two factors are closely associated with the dissolution of calcium carbonate and the absorption of N and P, and the factors may affect the quality of A. andraeanum.

A 3-year-old red variety of A. andraeanum called ‘Tropical’ was grown in the Landscape Practice Teaching Base of Guangdong Ocean University (Zhanjiang, China). It was cultivated in a 5-L flow aquarium using a general nutrient solution for A. andraeanum supplemented with oyster shell fragments (one plant per box). Its new leaf sheath had been exposed for one week and was bronze in color. Five-centimeter-long flower branches were obtained, from which the pedicels were used for the determination of Ca and PAL, while the spathe was used for anthocyanin content determination. The oyster shells (collected from Zhanjiang market waste) were immersed in a 0.1% hydrochloric acid solution for 10 h. The surface sediment was cleaned using a wire brush, then the shells were dried naturally in a ventilated area. The oyster shells were crushed using a grinder and then screened.

Adsorption of the oyster shell fragments.

The adsorption of total nitrogen (TN), ammonia nitrogen (NH4+−N), and total phosphorus (TP) by the differently sized oyster shell fragments in the general nutrient solution (Wang, 1997) was determined at different time periods. The optimum cultivation pH value for A. andraeanum was previously determined to be 5.5 to 6.5. Oyster shell fragments with masses of 0, 125, 250, and 375 mg were placed in four 5 L flow aquariums at pH 6.0, and a sample solution was extracted at different time periods (4, 14, and 24 h). N and P adsorption on the differently sized oyster shell fragments were determined in 12 groups of flow aquariums and was repeated three times. The adsorption rate was calculated as η = (C0 − Cx)/C0 × 100%, where C0 is the initial mass concentration for N or P in mg·L−1 and Cx is the residual mass concentration after adsorption.

Dissolution of the oyster shell fragments at different pH values and durations.

Oyster shell supplementation on Ca2+, PAL, and anthocyanins in A. andraeanum.

The oyster shell fragments were combined with an Anthurium general nutrient solution (The nutrient solution was changed once a week.) The Ca2+ contents and PAL activity of the pedicels, and the anthocyanin content of the spathe of A. andraeanum treated at different treatment durations (4, 6, 8, 10, and 12 weeks) were determined under weak light (220 μmol·m−2·s−1; Xia and Cai, 2004). The treatments were repeated three times. Atomic absorption spectrometry was used for the extraction and determination of Ca content. The extraction and determination of PAL used the method of Ouyang G.C. (1985). Briefly, 0.2 g of pedicels from A. andraeanum was combined with borate buffer containing 5 mmol·L−1 rye-based ethanol, a small amount of polyvinylpyrrolidone (PVP), and sterile quartz sand. The mixture was ground in an ice bath and centrifuged at 12,000 rpm for 15 min, with the resulting supernatant constituting the crude enzyme extract. The supernatant was diluted four times with 1 mL; was absorbed at 0.8 mL; and was added to a 2 mL 0.1 mol·L−1 pH 8.8 borate buffer containing 2.0 mL 0.02 mol·L−1 L-phenylalanine, following which it was placed in a water bath at 30 °C for 1 h. The supernatant was measured at OD290 with an ultraviolet spectrophotometer. The determination of anthocyanin content followed the method of the East China Normal University’s Biological Department (ECNU, 1980). Briefly, 0.2 g of spathe from A. andraeanum was weighed and cut into ≈2 to 3 mm fragments. The fragments were then placed into a plugged test tube. Twenty milliliters of 0.1 mol·L−1 HCl was added to the test tube, which was then placed in a constant temperature water bath at 32 °C for 4 h. The filtrate was filtered and measured spectrophotometrically at OD530. The relative concentration unit of the anthocyanins was expressed 10 times.

Analysis of the adsorption of N and P by the oyster shell fragments.

Effect of different pH values on the dissolution and release of Ca from the oyster shell fragments.

At the same time, the pH value of Anthurium soilless culture in actual production is between 5.5 and 6.5. Considering the adsorption effect of 375 mg and a 6.0 pH value of oyster shell fragments, pH = 5.9 was selected for the following experiments.

Effects of temperature and light intensity (PFD) on PAL activity and anthocyanin content in A. andraeanum

Comparative experiments of the effects of light and different temperatures on the growth of A. andraeanum showed that temperatures above 30 °C were too high for the plants, whereas temperatures below 15 °C resulted in yellow leaves, green back, and other harmful symptoms that significantly affected plant growth and development.

The contents of Ca2+ in the pedicels and anthocyanins in the spathe were determined under cultivation with 375 mg oyster shell fragments.

Ca2+ content in the pedicels increased first and then decreased with the increase in treatment time. Ca2+ content (mg) and treatment time (weeks) were not significantly associated (F = 1.694, F0.05 = 19.00, F < F0.05), indicating that the increase in Ca2+ content was not significant with time. However, at T = 8.5 (weeks), the Ca2+ content had a maximum value of 0.4900 ± 0.0482 (mg). It is possible that the accumulation of Ca2+ (with higher absolute value) inhibits PAL activity due to the increase of solubility of oyster shell piece. This characteristic can also be inferred from the correspondence of the peak values of Ca2+ and PAL (Figs. 8 and 9) occurring simultaneously in the eighth week.

The results show that larger oyster shell fragments are associated with improved adsorption of N and P, with adsorption increasing rapidly initially and then slowing down with time. The oyster shell fragments with different masses at pH 5.9 value can significantly adsorb N and P within 4 to 14 h, exhibiting high adsorption rates high within 4 h, thus constituting a stable slow-release fertilizer source. We also discovered that lower pH values are associated with faster oyster shell dissolution. When the pH value of the solution was 5.5, maximum dissolution was achieved within 9 h. The microdissolution has a significant relationship with the pH value and time.

CaCl2 can effectively increase PAL activity and anthocyanin content in the pedicel (Avila-Rostant et al., 2010). It is proved that Ca2+ can overcome the decrease in photosynthate (mainly sugars) accumulation and PAL activity caused by insufficient sunlight (Wang, 1999; Wang et al., 2018) and can provide sufficient precursors and pathways for the synthesis of anthocyanins, thereby increasing anthocyanin content (Yang et al., 2015). The use of exogenous Ca2+ derived from oyster shell waste not only alleviates the environmental pollution caused by unused oyster shells but also offers a solution for improving the cultivation of A. andraeanum. In the future, it can also be used as a typical plant landscaping model under the tropical valley rainforest. 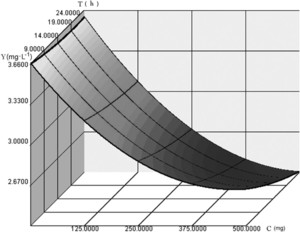 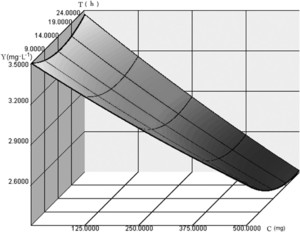 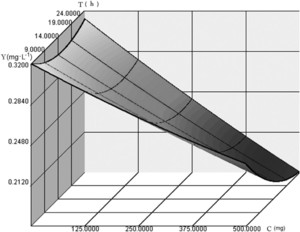 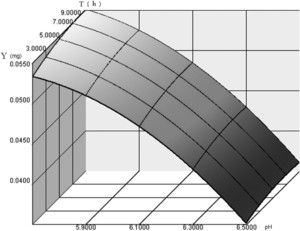 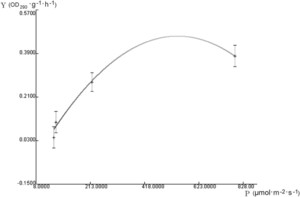 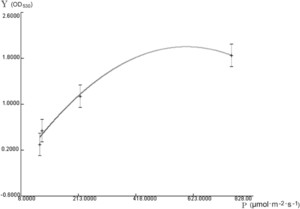 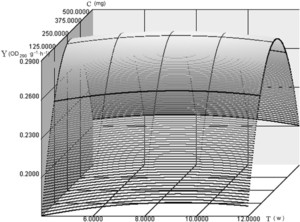 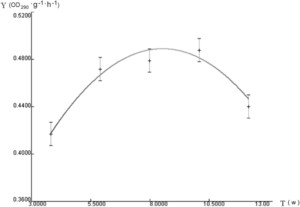 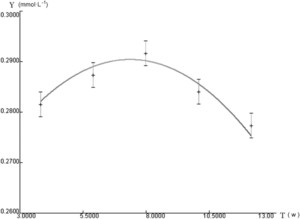 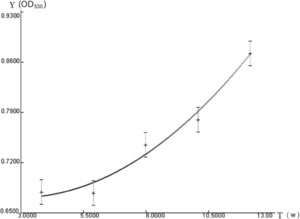