‘KU Garnet No.1’ is a maroon-leaved dwarf guava suitable as an ornamental plant that can be grown either directly in the landscape or for container production. In addition, ‘KU Garnet No.1’ produces year-round sweet, edible fruits containing high amounts of antioxidants. The ‘KU Garnet No.1’ tree is vigorous and has a compact, upright growth habit; maroon young leaves, pink flowers, and a maroon-skin fruit with whitish purple pulp.

‘KU Garnet No.1’ is the first maroon-leaved dwarf guava in Thailand selected primarily for ornamental pot or bedding plant production. In addition, it can also be used for fresh fruit consumption, especially in urban home gardens. It has been grown and fruited in both containerized and field conditions in Kamphaeng Saen District, Nakhon Pathom Province, Thailand (lat. 14°02′N, long. 99°58′E). Leaf, flower, and fruit characteristics were evaluated under field conditions in Winter 2017 with five replications and with one leaf and fruit per replication from a single tree. Fruit characteristics and antioxidant traits were determined at the mature stage for fresh consumption (while the pulp is still firm and crisp) and were compared with the ‘Paen Seethong’ cultivar, the major commercial white-pulp cultivar for fresh fruit consumption in Thailand. The colors were described using the Royal Horticultural Society Color Chart (Royal Horticultural Society, 2001).

The ‘KU Garnet No.1’ tree is vigorous, with a compact upright growth habit (Fig. 1), as are KUHP25 trees. The tree can grow and fruit well under both pot and field conditions. The stem is thick, usually inclined, and divides into several branches, drawing an open crown with dense quadrangular twigs, and has short internodes (1.67 cm). The trunks and older stems have a mottled appearance and a color that is purplish brown (200C) for newer bark (smooth surface) and grayish brown for older bark (rough surface). The older bark peels off in flakes. The younger stems are greenish red to maroon in color and pubescent. The color of the wood and pith is light purplish white and dark grayish purple, respectively.

The small twisting and curving leaves are elliptical with average dimensions of 3.90 cm in length and 2.06 cm in width, entire margins, acute tips, obtuse bases, and typically 13 or 14 pairs of lateral veins. The leaf arrangement is opposite and decussate. The upper and lower surfaces of young leaves are pubescent and velvety. The leaf color of ‘KU Garnet No.1’ is similar to that of KUHP19. Young leaves are grayish purple (187A to 187B), with a lighter color along the midrib, that gradually changes to grayish green (N189A) as they age. The leaf has a short (0.45 cm) greenish red petiole. The prominent midrib and lateral veins of leaves of both upper and lower sides are a greenish red that changes to a lighter color when mature. Based on field observations, the color of young leaves is maroon throughout the year but is a more vivid red in winter than in other seasons, and shaded leaves have more green color than the leaves that receive more sunlight.

‘KU Garnet No.1’ blooms throughout the year, and new flowers can be induced simply by pruning. However, flower life is very short, with flowers lasting only for half a day after blooming. The inflorescences are cymes or sometimes solitary flowers (one to three flowers) that grow on the leaf axils. The mild fragrance generally found in the species was observed. The flowers are showy, with a diameter of 3.29 cm and a petal length of 1.46 cm, and with short (0.61 cm) greenish red to maroon pubescent peduncles. The sepals are greenish red, changing from dark to light from base to tip. The five petals are light pink (55D to 55B) with darker pink veins. The stamens are very conspicuous, brightly colored, and numerous. The color of the anthers and filaments is a darker pink than that of the petals. The length of the outer filaments (1.11 cm) is slightly longer than that of the style, whereas the length of the inner filaments (0.03–1.10 cm) is shorter than that of the style. The pollen is white and abundant. The style is pink (like the filaments), with a length of 1.07 cm, and is topped with a darker pink stigma. The tree is self-fertilizing, resulting in good fruit set.

The fruit is round to obovate (Fig. 2), has smooth skin, is free of pubescence, and has four or five remnants of persistent sepals at the stylar end. The fruit is small and fairly uniform, with an average weight of 92 g, length of 5.78 cm, width of 5.40 cm, and pulp thickness of 1.16 cm (Table 1). The fruit contains numerous hard orange-white kidney-shaped seeds (159A) with an average weight of 0.79 g/100 seeds. The skin color of young fruit is primarily grayish purple (187A), changing to a lighter grayish purple (187B) with dark grayish purple spots when mature, and to yellow-green (152B to 152A) with reddish purple spots when ripe. The pulp and central pulp color of young fruit is dark whitish purple (186A), changing to light whitish purple (186D) when mature (Fig. 2). The fruit development period of ‘KU Garnet No.1’—that is, the number of days from full bloom to harvest for fresh consumption (when the pulp is still firm and crisp)—is about 112 d, which is slightly shorter than the 119 d for ‘Paen Seethong’. The fruit pulp at the mature stage is moderately juicy, sandy or gritty in texture, and is categorized as sweet with a soluble solids concentration of 10.06% and a titratable acidity of 1.18% (Table 1). The fruit pulp does not have a tendency to turn brown after cutting. 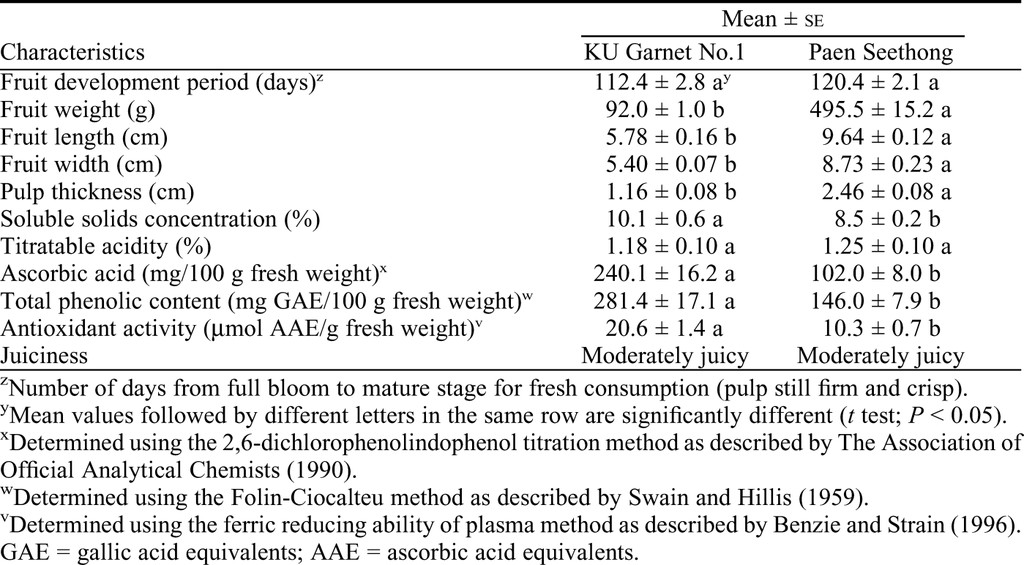 As ‘KU Garnet No.1’ is the first maroon dwarf guava in Thailand, it clearly shows a greater potential to be used as a potted or bedding plant, especially in limited spaces, than other normal (nondwarf) maroon guavas available in Thailand, such as the ‘Maejo342’ and ‘Thai Maroon’ genotypes. In addition to the more compact size of plant parts, including the canopy, leaves, flowers, and fruit, ‘KU Garnet No.1’ has a twisting and curving leaf shape that is more attractive than the typical leaf shape of the normal maroon genotypes. However, some other important characteristics of ‘KU Garnet No.1’, such as the color of stems, leaves, flowers, and fruit, are quite similar to those of the normal maroon genotypes (unpublished data).

Budwood of ‘KU Garnet No.1’ can be acquired under a material transfer agreement with the Department of Horticulture, Faculty of Agriculture at Kamphaeng Saen, Kasetsart University.

A six-month-old ‘KU Garnet No.1’ tree propagated by air-layering and grown in a 12-inch pot in winter, showing growth habit and leaf, flower, and young fruit characteristics.

A longitudinal cross-section of a mature fruit of ‘KU Garnet No.1’ showing shape, skin, and pulp characteristics. 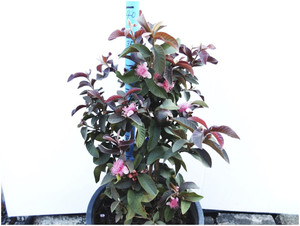 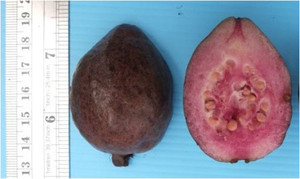