‘Gumbo’ (patent applied for) is a new southern highbush blueberry (Vaccinium spp. hybrid) cultivar developed by the U.S. Department of Agriculture, Agricultural Research Service (USDA-ARS) and is jointly released with the Mississippi Agricultural and Forestry Experiment Station. The new cultivar has several advantageous attributes for blueberry growers in the southeastern United States and other subtropical regions with more temperate winters. Among these is an earlier ripening period (10–14 d) than the earliest ripening rabbiteye blueberry cultivars, the predominant blueberry type grown along the U.S. Gulf Coast. In comparison with other southern highbush cultivars with similar chill-hour adaptation to this region, ‘Gumbo’ has consistently displayed high plant vigor, good yield potential, and high fruit quality. ‘Gumbo’ is expected to provide growers along the U.S. Gulf Coast, and other areas of moderate winter chilling where blueberries are grown, enhanced opportunities to compete in the local early fresh-berry market.

‘Gumbo’ originated from a cross of ‘Cara’s Choice’ (Ehlenfeldt et al., 2005) × MS 6 and was crossed in 2000 and selected in 2003 at the USDA-ARS Thad Cochran Southern Horticulture Laboratory in Poplarville, MS (Fig. 1), and was tested as MS 1377. ‘Cara’s Choice’ was derived from the cross of G-144 [northern highbush (NH)] × US 165, a complex species hybrid [southern highbush (SH)] resulting from crosses among Vaccinium corymbosum (L.) selections, NH and SH cultivars, V. darrowii (Camp), V. constablaei (Gray), as well as several V. virgatum (Aiton; rabbiteye) selections and cultivars (Fig. 1). MS 6 also originated from crosses among NH and SH. Hence, the name ‘Gumbo’ was chosen to reflect the diverse combinations of Vaccinium species contributing to the genetic makeup of this new cultivar. Plants of ‘Gumbo’ grow vigorously, have dark-green foliage, and have an upright growth habit with narrow crowns (Fig. 2). ‘Gumbo’ produces large, attractive, light-blue firm berries with good flavor and small picking scars (Fig. 3). Through comparison of flowering dates with to those of other blueberry cultivars with known chilling requirements, ‘Gumbo’ is estimated to have a chilling requirement of 350 to 400 h at less than 7 °C.

‘Gumbo’ and four standard southern highbush blueberry cultivars—‘Jewel’ (USPP 11,807), ‘Star’ (USPP 10,675), ‘Pearl’ (Stringer et al., 2013), and ‘Santa Fe’ (USPP 10,788)—were established in 3 three-plant replicates in 2003–04 and were evaluated over 8 years (2009–16) near Perkinston, MS (lat. 30.7822° N, long. 89.1428° W) in south-central Mississippi. Plants were grown in a McLaurin sandy loam soil (pH 5.2) amended with 200 m3 pine bark per hectare using recommended production practices, including drip irrigation and fertigation (Braswell et al., 2009). Observations were made on plant and berry attributes, including bloom and ripening dates, and subjective measurements were made on productivity, berry color, berry scar, and flavor each year from 2009 to 2016. Data from each replicate were pooled to provide attribute values for each respective year and were subsequently used to calculate mean ± se. Laboratory measures of berry size, soluble solids content, pH, berry firmness, and berry splitting tendencies were acquired from 2010 to 2016.

The blooming and ripening period of ‘Gumbo’ was similar to ‘Santa Fe’, but was 1 week and 2 weeks later than ‘Star’ and ‘Jewel’, respectively, and 10–14 d earlier than ‘Pearl’ (Table 1). Observations demonstrated that ‘Gumbo’ plant vigor was comparable to ‘Santa Fe’, and greater than other cultivars tested. ‘Gumbo’ productivity was comparable to ‘Star’ and greater than the other comparison cultivars. However, some of ‘Gumbo’s yield advantage may be attributed to the fact that the slightly earlier blooming periods of ‘Star’ and ‘Jewel’ exposed them to late-spring frost events and subsequent flower-bud injury and yield reduction. In comparison to ‘Star’ and ‘Jewel’, berries of ‘Gumbo’ had a visibly lighter blue color, but berry color was comparable to both ‘Pearl’ and ‘Santa Fe’. Picking scars were generally small for all cultivars, but those of ‘Star’ were slightly larger. Berry flavor values were comparable for most cultivars, although soluble solids content of ‘Gumbo’ was less (Table 2). ‘Gumbo’ flavor was found to improve when berries were allowed to hang for several days after attaining their light-blue color.

Observations on fruit and plant characteristics of ‘Gumbo’ and selected southern highbush cultivars at Perkinston, MS, 2009–16.

Laboratory measurements of berry attributes were made from samples collected from each of the three replications of each cultivar from 2010 through 2016, and data were pooled to calculate mean ± se. Berry size was determined by weighing 30 berries of each cultivar and subsequently calculating the average berry weight. Soluble solids content and pH were determined from juice extracted from a puree of a 40-g sample placed into a commercial Waring® blender (Dynamics Corp. of America, Hartford, CT) and strained through cheesecloth. A hand-held temperature-compensating refractometer (AR 200, Leica Microsystems, Welzar, Germany) was used to measure juice. Soluble solids concentration pH was measured using an AR20 pH/conductivity meter (ThermoFisher Scientific Corp, Waltham, MA). Berry firmness measurements were obtained from 20 berry samples run on a Firmtech II (Bioworks Corp., Stillwater, OK), an apparatus that measures firmness in terms of the rate (grams per millimeter) at which force increases as berries are squeezed and deflected. Tendencies of berry splitting were measured by soaking 50 fully ripe berry samples in distilled water for 24 h and counting the number of split berries (Marshall et al., 2008). Berry weight of ‘Gumbo’ was comparable to that of both ‘Star’ and ‘Jewel’, and greater than ‘Santa Fe’, but less than ‘Pearl’ (Table 2). Soluble solids content ‘Gumbo’ berries was comparable to that of ‘Star’, but less than the other cultivars; pH values were similar for all cultivars. Berry firmness of ‘Gumbo’ was less than ‘Pearl’ or ‘Santa Fe’, comparable to ‘Star’, and greater than ‘Jewel’. Physiologic splitting values were low for all cultivars except ‘Santa Fe’.

Prominent attributes of ‘Gumbo’ are high plant vigor, early berry ripening, good productivity, large berry size, and light-blue berry color. ‘Gumbo’ is expected to perform well not only in the Gulf Coast region of the United States, but also in other areas where southern highbush blueberry cultivars with low to moderate chilling requirements are grown successfully. ‘Gumbo’ should be planted with other southern highbush blueberry cultivars with similar blooming periods to facilitate pollination and fruit set, such as ‘Camelia’ (USPP 18,151), ‘Rebel’ (USPP 18,138), ‘Santa Fe’ (USPP10788P), and ‘Star’ (USPP 10,675). No disease symptoms were observed on ‘Gumbo’ during the evaluation period.

‘Gumbo’ is released unconditionally, with no warranty given regarding its performance or adaptation under specific environmental or cultural conditions. The USDA-ARS has submitted a patent application for this cultivar and it will become available for licensing. Nurseries interested in this new cultivar should contact the Mississippi State University Office of Technology Management, 60 Technology Blvd., Suite 115A, Starkville, MS 39795. Researchers interested in evaluating ‘Gumbo’ may also request information regarding testing under a Material Transfer Agreement. 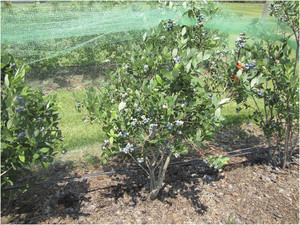 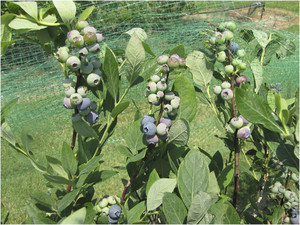