USVL351-PMR (powdery mildew resistant) and USVL482-PMR are bottle gourd (Lagenaria siceraria) germplasm lines that exhibit high levels of resistance to the cucurbit powdery mildew (PM) pathogen (Podosphaera xanthii) compared with susceptible commercial bottle gourd rootstocks and other PIs. Powdery mildew is an important foliar disease affecting cucurbit crops grown in the United States and most parts of the world. It commonly occurs on seedlings, mature plant foliage, petioles, and stems. Resistance in these two germplasm lines is expressed as none to a few PM lesions, with sparse pathogen mycelia or conidia observed on young seedlings (including hypocotyls, cotyledons, and true leaves) in greenhouse evaluations. In comparison, severe PM development and abundant pathogen conidia can be observed on the susceptible rootstock ‘Emphasis’ and the susceptible line USVL848-PMS. Mature plants of USVL351-PMR and USVL482-PMR are also tolerant to PM under field conditions in South Carolina. These two germplasm lines are highly uniform for PM resistance and growth characteristics, including fruit size, shape, and color. Most commercial bottle gourd lines currently used as watermelon rootstocks in United States are not resistant to cucurbit PM. Thus, USVL351-PMR and USVL482-PMR can serve as useful sources for incorporating resistance to PM in commercially acceptable bottle gourd rootstocks and cultivars. These lines will also be useful for incorporating PM resistance in bottle gourd varieties that are cultivated for fruit consumption in Asia. These are the first bottle gourd germplasm lines with resistance to PM released in the United States.

Powdery mildew incited by P. xanthii is a major foliar disease affecting most cucurbit crops throughout the world (McGrath, 2017). The disease is considered a major limiting factor in cucurbit production and all cucurbit crops are known to be susceptible to PM (McGrath, 2017). Podosphaera xanthii can infect hypocotyls, cotyledons, stem, leaves, and fruit (Cohen et al., 2004; Jahn et al., 2002; Kousik et al., 2008, 2011; McGrath, 2017). Infection by P. xanthii can also reduce seedling vigor and predispose the plant to other diseases (Kousik et al., 2008; McGrath, 2010). Fungicides and host plant resistance are generally used to manage PM of cucurbits (Keinath, 2015; Keinath and DuBose, 2004, 2012; Keinath and Rennberger, 2017; McGrath, 2017). However, resistance to fungicides in P. xanthii populations is fairly common (McGrath, 2010, 2017). Therefore, alternative methods are needed to manage PM in cucurbits. For many of the cucurbits, PMR breeding lines, hybrids, and cultivars have been developed and these include squash (Hultengren et al., 2016), pumpkin (LaPlant et al., 2016), melon (Crosby et al., 2015; Jahn et al., 2002), watermelon (Ben-Naim and Cohen, 2015; Kousik and Ikerd, 2016), and bitter gourd (Dhillon et al., 2018). However, PMR bottle gourds lines have not been developed and released in the United States.

In the United States, grafting cucurbits, especially watermelon seedlings, on to various rootstocks including bottle gourds, primarily for managing fusarium wilt, has been gaining popularity (Bruton et al., 2009; Davis et al., 2008; Keinath and Hassell, 2014; King et al., 2008, 2010). In Asian countries, grafting watermelon on bottle gourd and other intraspecific hybrid rootstocks has been popular for more than 90 years (Cohen et al., 2007; Lee, 1994). Not surprisingly, most of the rootstocks available in the United States are relatively old, and were developed in Asia (King et al., 2010). Unfortunately, most of them are susceptible to PM (Kousik and Hassell, 2009). Bottle gourd is naturally resistant (a nonhost) to fusarium wilt of watermelon incited by Fusarium oxysporum f.sp. niveum and, hence, are used as rootstocks for grafting (Keinath and Hassell, 2014; Yetisir et al., 2007). Kousik et al. (2008) evaluated the entire available US PI collection of bottle gourds for resistance to PM to develop resistant rootstocks for use in rootstock breeding programs. In this evaluation, it was observed that most of the 234 bottle gourd PI were susceptible to PM (Kousik et al., 2008). However, plants within PI 271351 and PI 487482 displayed different levels of resistance, with some being susceptible to PM (Kousik et al., 2008). Therefore, a simple pure line selection procedure was used to develop highly resistant homogenous individuals for use in rootstock breeding programs. In a second 2007 screen, seedlings of PI 271351 and PI 487482 were inoculated with a local P. xanthii race 1 isolate, classified based on Cucumis melo (melon) PM differentials (Jahn et al., 2002; Kousik et al., 2011; McGrath, 2017). Initially, data on PM development were recorded 2 weeks after inoculation on a 1 to 9 rating scale similar to a scale used by GRIN to classify PI for all diseases (Kousik et al., 2008). The mean rating for PI 271351 in this screen was 5.3 on the 1 to 9 scale, with 67% of the plants rated less than 4. Similarly, the mean rating for PI 487482 was 6.1, with 15% of the plants rated less than 4. Susceptible bottle gourd lines had ratings >7 in this test. Plants that were rated 1 were selected and grown in a screenhouse and self-pollinated (Kousik et al., 2008). Seedlings grown from seeds obtained from the select plants (rated 1) were reevaluated the next year in the same manner. Seedlings that were rated ≤2 for all three plant tissues (hypocotyls, cotyledons, and true leaves) were considered resistant and grown in a greenhouse and self-pollinated to develop homozygous populations. This procedure was repeated for a total of five generations to obtain S5 seeds.

Two field trials were conducted at the USDA, USVL research farm located in Charleston, SC, during the Summers of 2015 and 2016 to confirm resistance in the USVL-developed PMR S5 lines. Transplants of the two PMR lines and the susceptible checks USVL848-PMS and commercial rootstock ‘Emphasis’ were grown in 50-cell jiffy pots filled with metro mix (Sun Gro Horticulture, Bellevue, WA). After 4 weeks of growth in a greenhouse, the transplants were planted onto 91 cm raised beds in the field. The raised beds were covered with white plastic mulch and spaced 4.6 m apart. Plots were irrigated every week using subsurface drip irrigation with a drip tape that was placed 2.5 cm below the plastic mulch covering the beds. A randomized complete block design with four replications for each germplasm line or susceptible check plot was used to evaluate resistance to PM. Each plot was a single row of five plants with plant to plant spacing being 61 cm. Spacing between each plot was 3 m. Vines of the bottle gourd plants were turned every week to prevent the plants from growing into adjacent plots. After bedding but before planting, the row middles were sprayed with Roundup Pro (1.17 L·ha−1) and Dual Magnum (1.17 L·ha−1) for weed management. Weeds growing between the beds during the season were controlled by hand weeding and spot application of Roundup.

Powdery mildew occurs naturally in the fields in Charleston, SC; hence, plants were not inoculated. Plant foliage for each variety plot was rated for PM severity using a 0 to 10 rating scale similar to the Horsfall and Barrett rating scale of increasing disease severity, where 0 = no visible symptoms of PM, 1 = very sparse mycelial growth on leaves or cotyledons with very few to no visible conidia (1% to 3%), 2 = 4% to 6% of leaf area covered with PM and sparse development of conidia, 3 = 7% to 12%, 4 = 13% to 25%, 5 = 26% to 50%, 6 = 51% to 75%, 7 = 76% to 87% leaf area covered with PM and presence of abundant conidia, 8 = 88% to 94%, 9 = 95% to 97%, and 10 = 98% to 100% of leaf area covered with abundant conidia and leaf dying or dead (Kousik et al., 2018). Disease severity was recorded on lower leaves in the canopy during each rating period. The underside of five lower leaves for each plot was observed to provide one rating for each plot. Four weekly ratings were recorded from 12 June to 2 July in 2015. Similarly, four weekly ratings were recorded from 28 June to 28 July in 2016. The ratings were converted to the midpoint percentages for each category and area under disease progress curves (AUDPC) was calculated for each plot using the disease severity data (Madden et al., 2007). For statistical analysis, the percentage values were arcsine transformed and analyzed in a general linear mixed model using the PROC GLIMMIX procedure of SAS. Means were separated using the PDIFF option (α = 0.05). The AUDPC values calculated using the percentage severity values in each year are presented in Table 1 and the mean separation is based on the transformed values.

Area under disease progress curves (AUDPC) for development of powdery mildew on two resistant (PMR) bottle gourd lines compared with a susceptible (PMS) line and a commercial rootstock in 2015 and 2016. 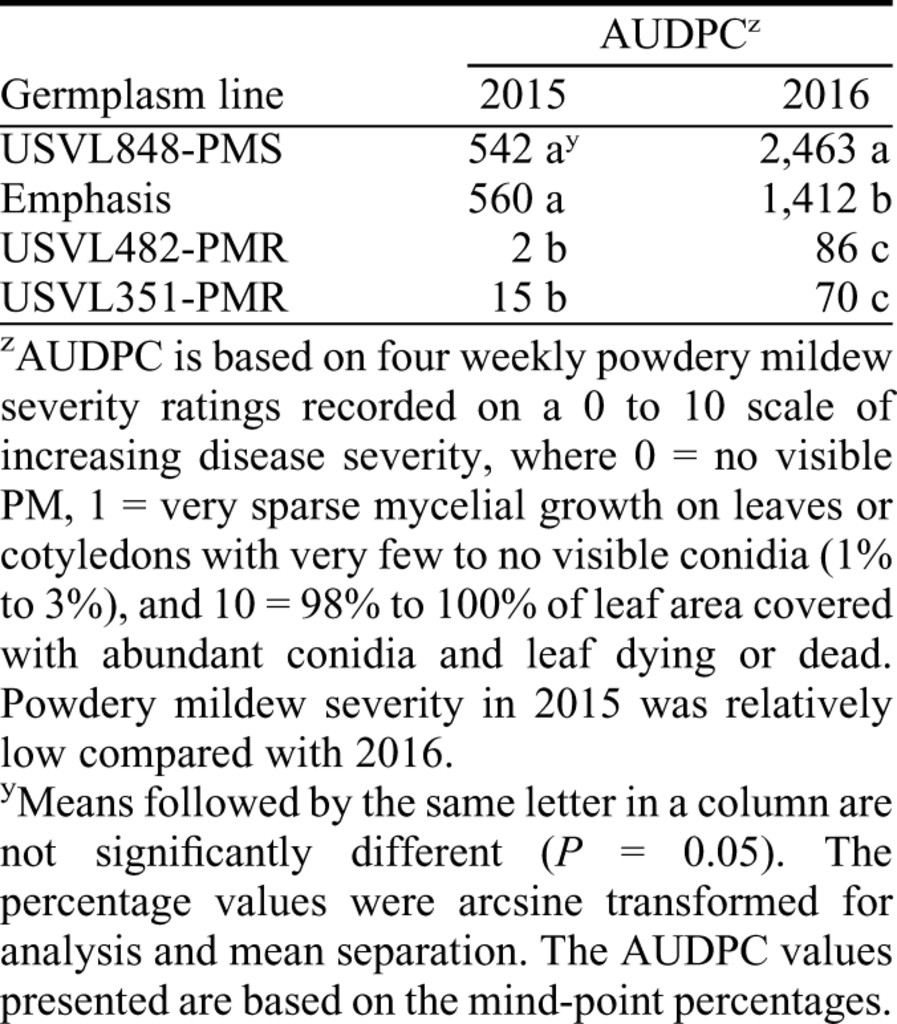 In both field trials, USVL 351-PMR and USVL482-PMR were significantly (P ≤ 0.001) resistant to PM compared with USVL848-PMS and ‘Emphasis’ based on AUDPC (Table 1; Fig. 1). In 2015, disease progress was relatively slow and not very severe. However, in 2016, disease developed rapidly and abundant P. xanthii conidia were observed on the underside of the leaves of USVL848-PMS and ‘Emphasis’. Earlier generations (S3) of USVL351-PMR and USVL482-PMR were also highly resistant to PM in field trials in Fort Pierce, FL (data not presented).

Three greenhouse trials were conducted to confirm the resistance in hypocotyls, cotyledons, and on seedlings of the two PMR germplasm lines. Seedlings were grown in 7.6 cm square pots (3″ Kord TRAD SQ Green; Kord Products, Toronto, Canada) filled with Metro Mix. A single seedling was maintained in each pot. A randomized complete block design with four replications for each entry or susceptible check was used. Each replication had four seedlings per entry. Three-week-old seedlings were inoculated with a local isolate of P. xanthii collected in the greenhouse. The local isolate (B108ML) was classified as Race 1 based on melon differentials (Kousik et al., 2011, 2018; McGrath, 2017). The local P. xanthii isolate B108ML was maintained in a growth chamber on ‘Early Prolific Straight Neck’ squash plants. For inoculation, the seedlings were sprayed with a conidial suspension (105 conidia/mL in 0.02% Tween 20) (Kousik et al., 2011, 2018). Disease severity was recorded on the same 0 to 10 rating scale as described previously on hypocotyls, cotyledons, and true leaves. Disease severity rating data were converted to midpoint percentages, arcsine transformed, and analyzed using the PROC GLIMMIX procedure of SAS, and means were separated using the PDIFF option (α = 0.05). PM severity values (percentages) are presented in Table 2.

In all three greenhouse experiments, the hypocotyls, cotyledons, and true leaves of USVL351-PMR and USVL482-PMR were significantly (P ≤ 0.001) resistant compared with USVL848-PMS and ‘Emphasis’ (Table 2; Figs. 2 and 3). Abundant P. xanthii conidia were observed on the hypocotyls and cotyledons of USVL848-PMS (Figs. 2 and 4) and ‘Emphasis’. The hypocotyls of ‘Emphasis’ had lower PM severity compared with that of USVL848-PMS in all three trials. Similarly, earlier generations (S3) of USVL351-PMR and USVL482 were resistant in greenhouse evaluations and had significantly less number of conidia on cotyledons compared with that of USVL848-PMS and ‘Emphasis’ (Kousik and Ikerd, 2013). In addition, USVL351-PMR, USVL482-PMR, and a hybrid of the two also imparted a significant level of tolerance to PM, especially to the second true leaf of a susceptible watermelon scion ‘Mickey Lee’, leading to 60% to 79% reduction in disease compared with the same scion grafted on the susceptible bottle gourd USVL848-PMS (Kousik et al., 2018). Reduction of PM severity on the susceptible scion ‘Mickey Lee’ grafted on USVL351-PMR and USVL482-PMR was also observed on the upper leaves (third to eighth true leaves) (Kousik et al., 2018). These results from grafting experiments also provide additional incentive for using these two bottle gourd lines in watermelon rootstock breeding programs to provide foliar resistance against PM to the scion. Preliminary field studies on inheritance indicate that PM resistance is a dominant trait in USVL351-PMR and USVL482-PMR.

Small amounts of seed of USVL351-PMR and USVL482-PMR produced by hand self-pollination in a greenhouse will be available for distribution to interested research personnel and plant breeders. Address all requests to Shaker Kousik, U.S. Vegetable Laboratory, USDA-ARS, 2700 Savannah Highway, Charleston, SC 29414 (e-mail: shaker.kousik@ars.usda.gov). Seeds of USVL351-PMR and USVL482-PMR will also be submitted to the National Plant Germplasm System where they will be available for research purposes, including the development and commercialization of new cultivars. It is requested that appropriate recognition of the source be given when this germplasm contributes to research or development of a new breeding line or cultivar.

Development of powdery mildew on cotyledons of the susceptible line USVL848-PMS (leaf on the left) and a commercial rootstock ‘Emphasis’ (leaf on right) compared with the two powdery mildew–resistant (PMR) germplasm lines USVL351-PMR and USVL482-PMR (in the middle) in greenhouse experiments. 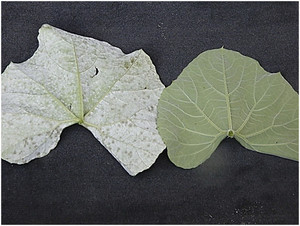 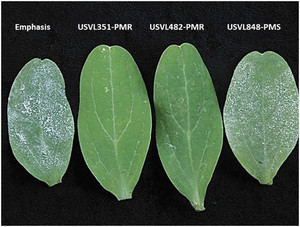 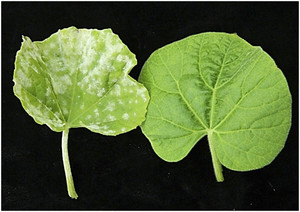 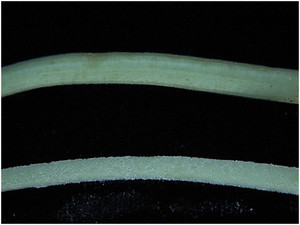