Irises are one of the world’s famous perennial flowering plant species. At present, there are ≈300 recognized species of Iris which are mainly distributed in the northern temperate regions. There are ≈60 species, 13 variants, and 5 forms in China (Shi and Gao, 2010). Iris sanguinea grows in swamps, swampy meadows, or sunny slopes, with ornamental and medicinal functions (Shang and Wang, 2014). It breeds easily and has strong resistance to diseases, pests, and cold. Rhizomes can survive in low temperature frozen soil down to −30 °C (Cai et al., 2016). The flower of I. sanguinea comes mainly in blue violet (RHS N88A) (Wang and Wang, 2017). In 2017, a new light violet (RHS 85C) I. sanguinea cultivar Forest Fairy resulted from the hybridization of I. sanguinea × I. sanguinea f. albiflora which was crossed in 2007. Flowers of ‘Forest Fairy’ were large and its outer and inner perianths have conspicuous brown reticulate veins on yellow claw at the base, and spoon-type parts of outer and inner perianths open horizontally and spread outward.

‘Forest Fairy’ was selected from progeny of the cross I. sanguinea × I. sanguinea f. albiflora in experimental nursery of Northeast Forestry University in 2017. The seeds of I. sanguinea and I. sanguinea f. albiflora were introduced from Shenyang Botanical Garden and sown in experimental nursery of Northeast Forestry University in the Spring of 2005. A cross between I. sanguinea and I. sanguinea f. albiflora was made in 2007. In 2009, a unique plant (NEFU-17) was observed from the population of the progeny. The plant had larger flowers, and flower color was light violet, compared with its violet female and white male parents. Its top of inner and outer perianths were spoon-type and spread nearly horizontally, whereas outer perianths of its parents curve downward and narrower inner perianths extend upward. After 6 years of propagation and observation, the promising clone was propagated and planted at the Mao-Er-Shan Forest Farm and Forest Zoo in Harbin, China, respectively in 2015. It showed stable and consistent morphological traits in the following 2 years. The new cultivar was officially authorized to be released as ‘Forest Fairy’ by The American Iris Society in Sept. 2017 with an accession No.17-0518.

Morphological traits were collected from 30 plants (10 plants/replication in 3 replications) of Iris sanguinea, I. sanguinea f. albiflora, and cultivar Forest Fairy which were planted in a randomized designed field in Northeast Forestry University, Harbin, China, from 2015 to 2017. 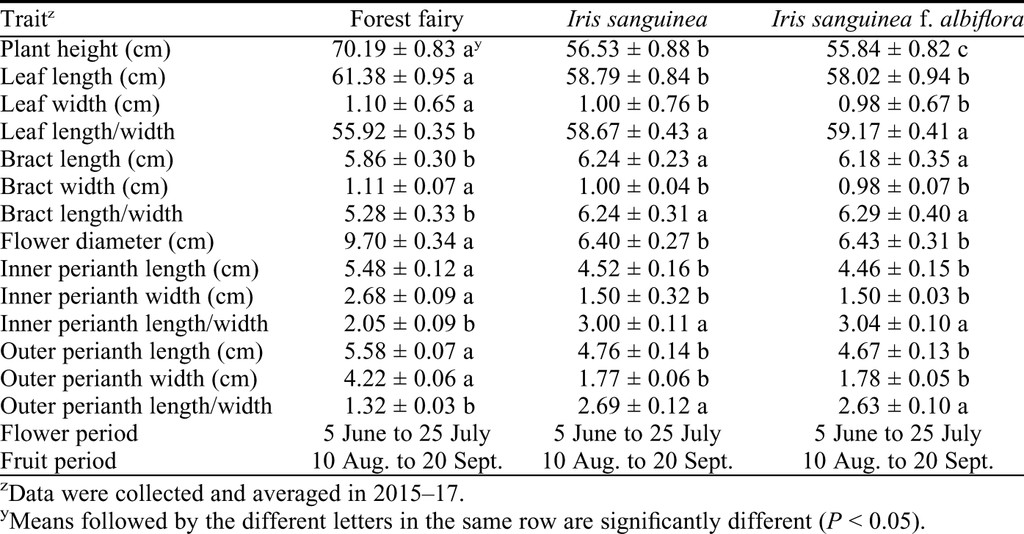 In short, the differences between ‘Forest Fairy’ and its parents mainly reflected by the flower color and size and leaf and bracts. Compared with its parents, ‘Forest Fairy’ has light violet flower color, higher plant height, and larger flower size with horizontally spreading both tops of outer and inner perianths. Therefore, it is a valuable addition in the diversity of I. sanguinea species for ornamental use.

‘Forest Fairy’ is suitable for cultivation and application in Northern China. It is suited to growth in sandy loam or light clay which is rich in humus and has good permeability for gas and water exchange (Wang et al., 2016). Propagation of ‘Forest Fairy’ is mainly through ramets harvested in spring and autumn. The two to three shoots are one plexus, and the planting distance is 25–30 cm. After the ramets recover growth, they need to be weeded on a regular basis and extensive management without fertilization.

Inquiries about research or use of ‘Forest Fairy’ plants can be addressed to Dr. Ling Wang (E-mail: wanglinghlj@126.com) at the College of Landscape Architecture, Northeast Forestry University, Harbin, China.