Caladiums (Caladium ×hortulanum Birdsey, Araceae Juss.) can be grown in containers or planted in the landscape as accent and border plants (Evans et al., 1992). They are valued for their long-lasting colorful foliage. Most of the commercially available caladium plants are forced from tubers. Florida growers supply essentially all the caladium tubers used in the United States and some 40 countries in the world for the production of pot plants and direct planting in the landscapes. New cultivar introductions are important not only to the Florida caladium industry but also to the greenhouse, nursery, and landscape industries.

Commercial caladium cultivars are often grouped into eight categories based on their leaf type and impact color [fancy white, red, pink, and novelty, and lance (or strap) white, red, pink, and novelty] (Bell et al., 1998). Recent surveys of the Florida caladium industry indicated that 51 caladium cultivars were planted in 2013 with two or more acres planted per cultivar (Deng et al., 2008; Z. Deng, unpublished data). Among the white lance-leaved cultivar groups are ‘Florida White Ruffles’ and ‘White Wing’. ‘Florida White Ruffles’ was released by the University of Florida/Institute of Food and Agricultural Sciences caladium breeding program in 2001. It was primarily bred for forcing in small containers and hanging baskets (Baldwin et al., 2002). ‘White Wing’ has been in commercial production for many years and was ranked 3rd among all lance-leaved cultivars in the acreage planted in 2013 (14.3 acres). ‘Icicle’ is a new addition to the white lance leaf cultivar group, and, here, we report its origin, tuber yield potential, plant performance in containers and landscapes, and resistance to Fusarium tuber rot, a major fungal disease of caladium that has caused substantial economic losses to the Florida caladium industry (Goktepe et al., 2007).

‘Icicle’ (Fig. 1) originated from a cross between ‘Candidum’ and ‘Gingerland’ that was made in Bradenton, FL, in Fall 2004. Both parents are nonpatented commercial cultivars. Reportedly, ‘Candidum’ was developed by Alfred Bleu, a French pioneer of caladium hybridization, around 1880 (Hayward, 1950). The ancestry of ‘Candidum’ and ‘Gingerland’ is unknown. First asexual propagation of ‘Icicle’ occurred in Balm, FL, in Spring 2006, and since then, it has been asexually propagated through tuber division for 10 generations. Plant, foliar, and growth characteristics of ‘Icicle’ have been stable and consistent during asexual propagation.

Description of color (e.g., RHS 200B) for plant parts was based on comparison with the Royal Horticultural Society Color Chart (Royal Horticultural Society, 1986). Plants used for color description were grown from de-eyed, jumbo-sized (or equivalent) tubers (two per container) in 20.3-cm containers in a shaded greenhouse with ≈30% light exclusion. The containers were filled with the potting mix Fafard 3B (Conrad Fafard Inc., Agawam, MA) amended with the commercial controlled release fertilizer Osmocote® (15N–3.9P–10K, 5–6 months; Scotts Co., Marysville, OH) at the rate of 4.3 kg·m−3.

Plants of ‘Icicle’ are ≈29 cm tall and 60 cm wide and produce upright, outwardly arching leaves. Mature leaves have an average size of 25 cm (length) × 17.5 cm (width). Leaves are sagittate-cordate, 23–27 cm long and 16.5–18.5 cm wide, and slightly undulate with white (RHS 155D) penniform venation. The upper surface has green (RHS 137A) margins, up to 10 mm wide, bordering the entire leaf except for the basal leaf valley formed by the two lobes where there may be a 1–2-mm-wide red–purple (RHS 60A) band or spot. The central vein is white (RHS 155D) and primary veins are yellow–green (RHS 145C). Interveinal leaf areas are white (RHS 155D) except for the areas near the margins where irregular grayed green (RHS 191C) mottling and blotching of green (RHS 137A) are present. The abaxial surface has grayed green (RHS 191A) margins, up to 10 mm wide, and a white (RHS 155D) center with blotching of green (RHS 137A) toward the margins. The central vein is white (RHS 155A) and primary veins are white (RHS 155A) with a thin line of yellow–green (144B) running down in the center. Petioles are ≈5 mm and yellow–green (RHS 144D) at the apex, but the color diffuses into grayed green (RHS 195A) with blotching of black (RHS 202A) near the base, which is ≈9 mm in diameter. Jumbo-sized tubers are multisegmented, bearing five to nine dominant buds. Tuber surfaces are brown (RHS 200C), with the cortical area being yellow (RHS 10C).

The suitability of ‘Icicle’ for container plant production was evaluated by forcing tubers in 11.4-cm containers (diameter) in Spring 2012, following the protocol of Harbaugh and Tjia (1985). Number 1–sized tubers were planted on 13 Apr. in a commercial potting mix (Fafard 3B) amended with Osmocote® fertilizer (15N–3.9P–10K, 5–6 months) at 4.3 kg·m−3; plants were grown in a greenhouse with ≈30% light exclusion. Temperatures in the greenhouse ranged from 16 °C (night) to 30 °C (day). Potted plants were arranged on metal benches in the greenhouse in a randomized complete block design with seven replications. Plant height, plant width, number of leaves, and foliar characteristics were recorded on 11 June 2012, about 8 weeks after planting. Quality of the potted caladium plants was rated on a scale of 1 to 5, with 1 = very poor, unattractive, and totally unacceptable as potted plants with few leaves and 5 = very attractive, full plants with a symmetrical shape, an appropriate height, and many bright, colorful leaves.

The landscape performance of ‘Icicle’ was evaluated in 2010 and 2014, on the same plots used for evaluating tuber production. A scale of 1 to 5 was used with 1 being very poor (few leaves and lack of vigor) and 5 being excellent (full plants, numerous leaves, and bright color display). Leaf sunburn tolerance was evaluated on a scale of 1 to 5, with 1 being very susceptible to sunburn (leaves having numerous sun-damaged areas or holes) and 5 being resistant to sunburn (no visible sun-damaged areas). Evaluations of plant performance and sunburn tolerance were carried out in July, Aug., Sept., and Oct. 2010, and July, Aug., Sept., and Oct. in 2014. Plant height, number of leaves per plant, and leaf size (maximum length and width) were measured on three plants arbitrarily chosen from each plot, approximately 4 months after planting.

Characteristics of ‘Icicle’ and two commercial caladium cultivars grown from tuber propagules (≈2.5 cm) in ground beds in full sun in Balm, FL (2010 and 2014).

Plant performance ratings of ‘Icicle’ and two commercial caladium cultivars grown from 2.5-cm tuber propagules in ground beds in full sun in Balm, FL (2010 and 2014). Performance ratings are means of three plots based on whole plot evaluation in each evaluation.

Sunburn tolerance of ‘Icicle’ and two commercial caladium cultivars grown from 2.5-cm tuber propagules in ground beds in full sun in Balm, FL (2010 and 2014). Sunburn tolerance ratings are means of three plots based on whole plot evaluation in each evaluation.

Lesion diameters (mm) on tuber halves of ‘Icicle’ and five commercial caladium cultivars inoculated with three isolates of Fusarium solani (13-341, 05-257, and 05-20) in two experiments in 2013.

‘Icicle’ is characterized by wide lance leaves with a large white center surrounded by green margins. It is expected to produce high-quality pot plants without de-eyeing and perform well in shady landscapes. Tubers of ‘Icicle’ can sprout 5–9 d earlier than ‘Florida White Ruffles’ and ‘White Wing’, which may result in a shorter production cycle to greenhouse growers. ‘Icicle’ has showed higher tuber yield potential than ‘Florida White Ruffles’.

‘Icicle’ was released under the name ‘UF-R1022’. Plant patent has been applied for ‘Icicle’ by the Florida Agricultural Experiment Station. Commercial production of this cultivar is required to have licensing agreements with the Florida Foundation Seed Producers, Inc., P.O. Box 309, Greenwood, FL 32443. Information on tuber availability and licensing agreements can be obtained from the Florida Foundation Seed Producers, Inc. (http://www.ffsp.net/). 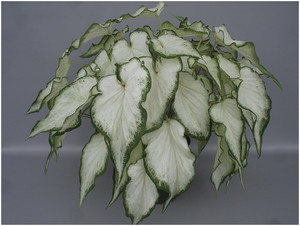 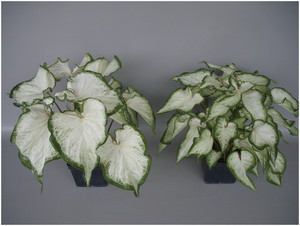