Royce S. Bringhurst and Victor Voth at the University of California-Davis (UC-Davis) revolutionized the strawberry industry in 1979 with the release of their first “day-neutrals” ‘Aptos’, ‘Brighton’, and ‘Hecker’ (Bringhurst and Voth, 1980). These day-neutrals could be programmed to produce fruit 3 months after planting and continued to fruit for up to 5 months regardless of daylength, greatly expanding the production season in California.

These unique cultivars were generated by backcrossing for three generations to conventional short-day types from a hybrid Bringhurst made between ‘Shasta’ and a Fragaria virginiana subsp. glauca clone from the Wasatch Mountains in Utah. Bringhurst continued backcrossing his elite day-neutral selections annually, releasing the very successful ‘Selva’ from the fourth generation and ‘Seascape’ from the fifth. This same strategy has been continued by Bringhurst’s replacements resulting in a string of day-neutral cultivar releases from the UC-Davis program.

As word spread about Bringhurst’s accomplishments, it did not take worldwide strawberry breeders long to begin using his day-neutral germplasm to generate new repeat flowering types. The standard approach was to hybridize a UC-Davis day-neutral selection or cultivar with their local short-day selections and then backcross like Bringhurst had done into their local breeding population. The USDA’s ‘Tristar’ and ‘Tribute’ were the first day-neutrals to be released outside of California in 1981. They were generated by Donald Scott in a 1974 cross using the parent of ‘Brighton’ and ‘Hecker’—Cal. 65.65-601 (Draper et al., 1981).

Over the last few decades, several day-neutral cultivars have been developed outside of California using Bringhurst’s source of day-neutrality, but none of these has achieved the commercial success of the UC-Davis cultivars. In general, their fruit are softer and smaller, and their floral development is inhibited by the hot summer temperatures common in temperate climates (Hancock et al., 2008). Because temperature has such a strong impact on performance, we have suggested that the day-neutrals are more appropriately called remontant (Bradford et al., 2010).

To facilitate the development of remontant cultivars outside of California, it is likely that local germplasm bases must be expanded. Levels of future success may be tied to incorporating new genetics into local breeding programs that are unique to the UC-Davis germplasm base. It might also be beneficial to incorporate genes specifically from genotypes that are known to be heat tolerant. Herein, we describe our efforts to generate such a diverse population that we would like to share with the breeding community.

Our germplasm development work progressed in three stages. In the Stage 1, we crossed a set of the most widely planted North American cultivars and native F. virginiana with UC-Davis ‘Hecker’, ‘Seascape’, ‘Selva’, and ‘Chandler’. A list of the native and cultivar parents can be found in Hancock et al. (2002). We also hybridized eastern cultivars with USDA-ARS selections developed by coauthor C.E. Finn containing blends of elite Pacific Northwestern selections, native germplasm, and California cultivars. The California cultivars were ‘Aromas’ and ‘Camarosa’ and the native selections were F. virginiana from Montana and Minnesota, and a land race of Fragaria chiloensis from Ecuador (Finn et al., 1998).

Most of the native selections that we used as parents are included in what was named the “Supercore Collection” (Hancock et al., 2000) and deposited in the National Clonal Germplasm Repository (NCGR) in Corvallis, OR. This collection is composed of 38 wild strawberry accessions that are horticulturally superior and represent a considerable range of the natural diversity found in the octoploids (2n = 8x = 56) F. chiloensis and F. virginiana (Hancock et al., 2000, 2001a, 2001b). It was based on evaluations of more than 2500 native F. virginiana from across the United States and Canada and more than 6000 F. chiloensis from California, Chile, and the Pacific Northwest.

In Stage 2 of our germplasm development, we hybridized the most elite selections from Stage 1 with four remontant Fragaria ×ananassa genotypes known to be heat tolerant (able to readily initiate flowers at 26 °C or higher). We took two approaches to identify and incorporate greater heat tolerance into our breeding population. In the first, we screened 13 cultivars and wild selections for their ability to flower and runner across a range of temperatures from 18 to 30 °C (Serçe and Hancock, 2005). We found the old Wyoming cultivar Fort Laramie to be much more heat tolerant than any other of the screened genotypes. We also compared the heat tolerance of the popular Midwestern cultivar Honeoye to the remontant ‘Tribute’ and found it to be more heat tolerant at 26 °C (Bradford et al., 2010). We then generated a segregating population of ‘Tribute’ × ‘Honeoye’ (T × H) and selected the most heat-tolerant individuals to use as parents (Mookerjee et al., 2013).

In our Stage 3 of germplasm development, we hybridized our most promising remontant selections from the first two stages of crosses with elite F2 selections from the F. ×ananassa “reconstruction” project (Hancock et al., 1993, 2010; Stegmeir et al., 2010). We also intercrossed most of the elite F2 hybrids identified in that project. In the reconstruction work, 10 elite wild and cultivated F. chiloensis and 16 native F. virginiana were first intercrossed within species, and then the most promising hybrids were crossed between species. An effort was made to incorporate as much geoecological diversity of each species as possible. Most of the original parents were represented in the Supercore Collection.

The hybrid families generated in 2013 and 2015 were planted in groups of 20–25 together in rows at 1.2 m × 1.2 m spacing at the Southwestern Michigan Research and Extension Center (Benton Harbor, MI) in late May in 2014 and 2016. In an adjacent field were planted ‘Seascape’ and ‘Albion’. The first round of flowers was removed from each plant and any runners that emerged were trained by cross row cultivation into 1 × 1 m2 squares. Starting in mid-July, the plantings were evaluated weekly to identify superior genotypes until all flowering was significantly diminished in September. Subjective notes (1–10) were taken on the most elite selections for season, productivity, vigor, fruit size, appearance, firmness, internal and external color, and flavor.

Well-adapted, elite hybrids were recovered from all our various crossing endeavors (Tables 1 and 2). Eleven hybrids were selected from crosses of our elite breeding material and UC-Davis cultivars and two of these have been released as cultivars (Redstart and Wasatch). Details on the two cultivar releases can be found at http://msut.technologypublisher.com/technology/22785 and http://msut.technologypublisher.com/technology/22786. Wasatch is a strong remontant and likely inherited this trait from its parent ‘Seascape’, containing the Wasatch source of remontancy. Redstart is a weak remontant and was derived from a cross of two short-day cultivars, Chandler and Honeoye. In the MSU breeding program, both these two short-day types have been found to produce a small percentage of remontant progeny.

Most interesting remontant selections in the MSU strawberry breeding program. 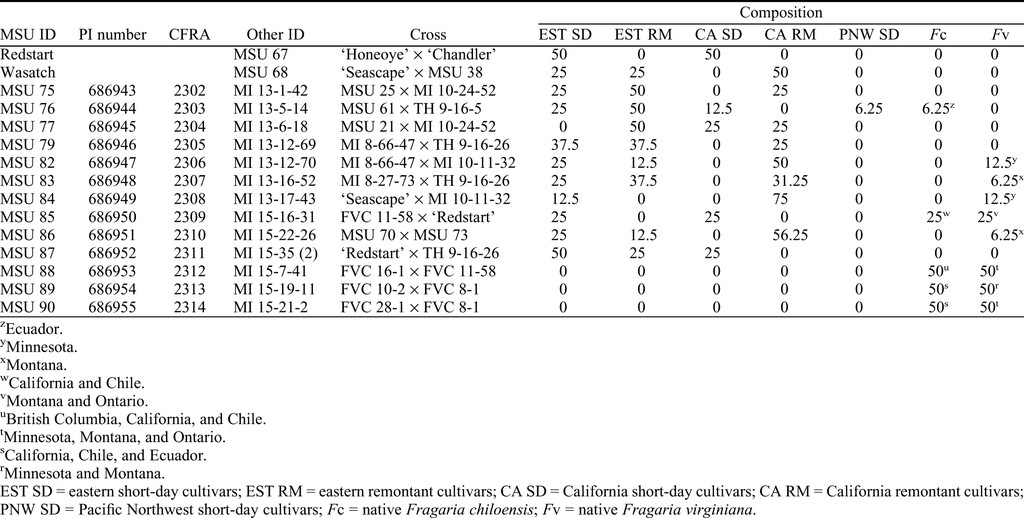 Pedigrees of the parents of elite remontant MSU strawberry selections. 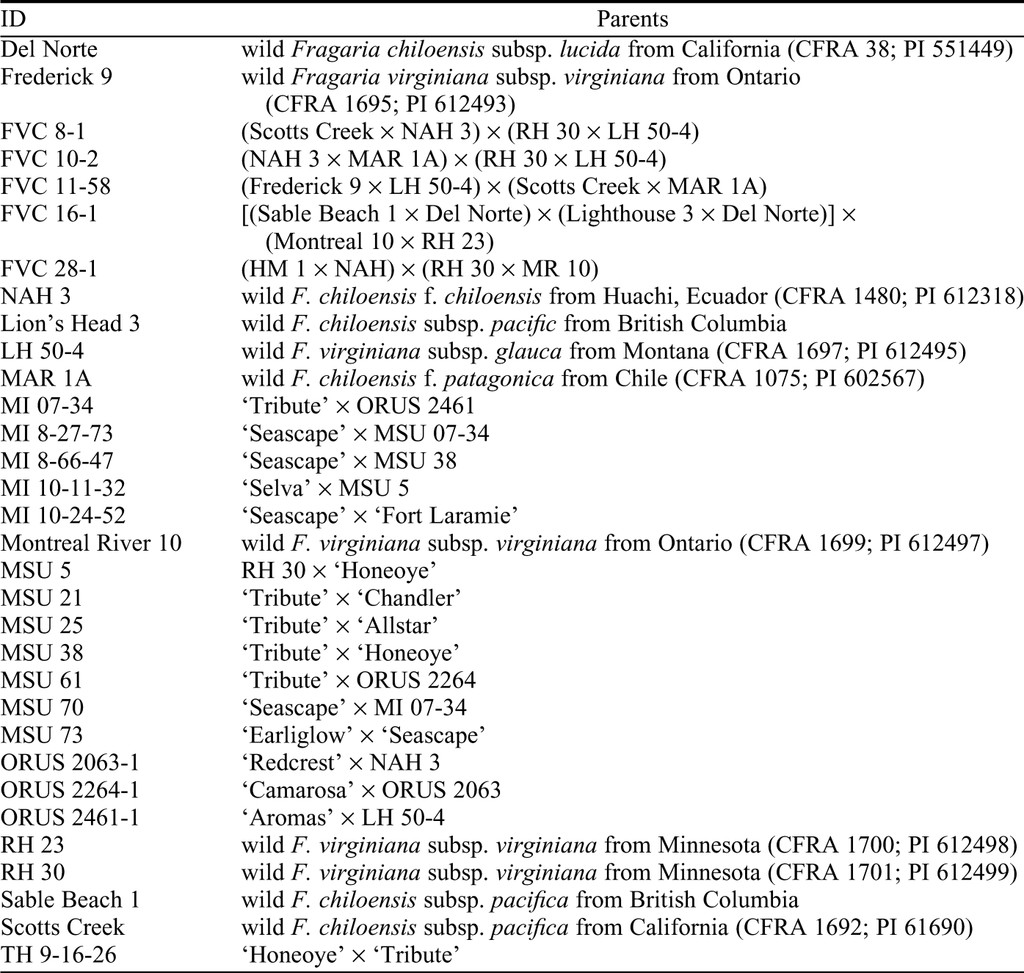 From the Stage 2 crosses, we selected three hybrids with heat-tolerant T × H in their background (MSU 79, 83, and 87), two with ‘Fort Laramie’ (MSU 75 and 77), four with F. virginiana (MSU 82, 83, 84, and 86), and one with F. chiloensis (MSU 76). MSU 83 combines genes from F. virginiana and heat-tolerant T × H. The origins of the F. virginiana contributors were Minnesota (RH 30) and Montana (LH 50-1), whereas the F. chiloensis donor was from Ecuador. The Ecuador contributor entered through one of C.E. Finn’s complex hybrids with California and Pacific Northwestern germplasm in its background.

From the Stage 3 crosses, three selections were made that were composed of only wild derived genes (MSU 88, 89, and 90) and another one that had half of its genes from wild sources (MSU 85). These selections combine genes in multiple combinations of F. chiloensis from British Columbia, California, Chile, and Ecuador and F. virginiana from the locations Ontario, Minnesota (2), and Montana.

Through these efforts, we believe we have constructed a unique breeding population for developing new remontant strawberry cultivars. We have successfully mixed cultivars from California, the eastern United States, and the Pacific Northwest with genes from native F. virginiana and F. chiloensis.

These four native F. virginiana selections could carry genes for day-neutrality that are unique from those of Bringhurst’s Wasatch selection. LH 50-4 is in the same Rocky Mountain subspecies (subsp. glauca) as the Wasatch selection, but the other three, RH 23, RH 30, and Montreal River 10, are all in a different, eastern subspecies (subsp. virginiana). We brought an old heat-tolerant cultivar (Fort Laramie) into the mix along with a genotype from a hybrid family of F. ×ananassa specifically screened for heat tolerance. ‘Fort Laramie’ was likely developed using F. virginiana subsp. glauca that is also unique to the Wasatch selection (Hildreth and Powers, 1940; Powers, 1954).

Time will tell if this breeding population will meet expectations, but if genetic diversity is the key to breeding success, this population should be useful to many strawberry breeders. Clones of these MSU selections have been deposited into the U.S. NCGR at Corvallis, OR, for research use. Seasonally available plant materials such as runners, leaves, pollen, or other forms can be requested through GRIN-Global at https://npgsweb.ars-grin.gov/gringlobal/search.aspx? or by communicating with the Curator, Dr. Kim Hummer.