‘Norman’ resulted from a cross of G-566 × ‘Legacy’ made in 1984 by Arlen Draper (Fig. 1). G-566 is a USDA northern highbush selection and Legacy is a southern highbush cultivar. The background of ‘Norman’ is primarily Vaccinium corymbosum, but also includes V. angustifolium Ait. from G-566 and V. darrowii Camp from ‘Legacy’. Seedlings from this cross were shipped to the University of Arkansas Agricultural Research and Extension Center, Fayetteville [USDA-ARS Hardiness Zone 6b (USDA, 2012); lat. 36°4′55.7616″N, long. 94°10′18.6751″W], planted in 1986, and A-272 was selected in 1990. A single original plant of the selection was maintained at this site for propagation.

Four two-plant replicated plots of ‘Norman’ were established at the University of Arkansas Fruit Research Station, Clarksville [USDA-ARS Hardiness Zone 7b (USDA Plant Hardiness Zone Map, 2012); lat. 35°31′57.9797″N, long. 93°24′14.8599″W], in the Spring of 1999. Observational and replicated data were taken on the selection plots during Summers of 2001–06. Also, in this planting were ‘Bluecrop’, ‘Ozarkblue’, and ‘Summit’. An additional non-replicated plot of four plants of ‘Duke’ highbush blueberry was established adjacent to the replicated planting the same year, and observational data were collected from ‘Duke’ for comparison. Bud swell, yield, and berry weight data (25 berries from each replication at each harvest) were collected for the replicated plants and data analyzed by SAS (SAS Institute, Cary, NC) with means separated by least significant difference. Ratings for fruit size, scar, color, firmness, and flavor were recorded and means and sds calculated. The scale used was 1 to 10, with 10 being the most desirable rating. Standard cultural practices for blueberries included the addition of peat to the planting holes, mulching with sawdust or wood chips at 10- to 15-cm depth, annual application of pre-emergent herbicides, irrigation as needed using drip irrigation, annual dormant pruning after year three in the field, and annual applications of N fertilizer (90–120 kg·ha−1 depending on plant age). No fungicides or insecticides were applied to the planting.

A single three-plant plot of ‘Norman’ was established in 2006 at the Oregon State University North Willamette Research and Extension Center (OSU-NWREC; Aurora, OR) [USDA-ARS Hardiness Zone 8b (USDA Plant Hardiness Zone Map, 2012); lat. 45°16′48″N, long. 122°45′3″W], with adjacent plots of ‘Aurora’, ‘Bluecrop’, ‘Draper’, ‘Liberty’, and ‘Mini Blues’ (name changed from ‘Baby Blues’ because of U.S. Patent Office name rejection, Finn et al., 2016, for comparison). Data collected were 5%, 50%, and 95% harvest date, yield, and berry weight (measured from 25 berries from each replication at each harvest), and means were calculated each year for the three-plant plots. In this trial, standard cultural practices for blueberry production were used, including dormant pruning annually to balance vegetative growth with cropping potential, drip irrigation (Strik et al., 1993), and fertilization with 90 kg·ha−1 of N divided into equal portions and applied from bloom to mid-June of each year (Hart et al., 2006). Pre- and post-emergent herbicides were applied annually and fungicides, particularly for protection against botrytis fruit rot (Botrytis cinerea Pers.), and insecticides, particularly for control of winter moth (Operophtera brumata L.), were applied per recommendations (DeFrancesco et al., 2013) without any knowledge of the susceptibility of the selections in trial to these pests.

Also, three 3-plant plots were established in Lowell, OR [USDA-ARS Hardiness Zone 8b (USDA Plant Hardiness Zone Map, 2012); lat. 43°55′6.4531″N, long. 122°47′1.2559″W]; Oxnard [USDA-ARS Hardiness Zone 10a (USDA Plant Hardiness Zone Map, 2012); lat. 34°11′51.0173″N, long. 119°10′37.3858″W]; and Delano, CA [USDA-ARS Hardiness Zone 9b (USDA Plant Hardiness Zone Map, 2012); lat. 35°46′7.8330″N, long. 119°14′49.3930″W] in 2004, 2007, and 2008, respectively, by Fall Creek Nursery Farm and Nursery, Inc. (FCFN). Limited data were collected on these plants in evaluation and included first harvest date and average yield (yield collected only in 2011 and 2013, and the cultivars Springhigh and Suzieblue were also harvested for yield for comparison in these years). Flavor, picking scar, and fruit color were subjectively rated on a 1 to 5 scale, with five being the most desirable rating—excellent flavor, small picking scar, and light blue fruit color. In some years, comparison data on these variables were collected on ‘Bluecrop’, ‘Star’, and ‘Kestrel’ at the FCFN locations. At each FCFN test location, 3.8-L–sized nursery stock was planted into a raised bed with incorporated hardwood mulch at 6.4 cm within row and 30.5 cm between rows. In Lowell, plants were fertilized and mulched according to the recommendations for granular fertilizer in Oregon (Hart et al., 2006). Irrigation was provided with overhead sprinklers as needed. Plants were annually pruned when dormant, and pests and weeds were managed with pesticides according to the recommendations in the Pacific Northwest Pest Management Handbooks (http://pnwhandbooks.org/). The main pathogens and pests treated included bacterial canker (Pseudomonas syringae van Hall), botrytis blight and fruit rot, mummy berry [Monilinia vaccinii-corymbosi (Reade) Honey], blueberry leaf rust [Naohidemyces vaccinii (Jørst) S. Sato, K. Katsuya, & Y. Hirats, ex Vanderweyen & Fraiture], and scale and aphids (scale and aphid species not identified). California plots were protected by high-tunnel structures covered with clear plastic. Irrigation and fertility were provided through drip irrigation. Irrigation cycles varied according to water demand. Plants were pruned in June following harvest, with additional detailed pruning in December as needed. The main pathogens treated were botrytis blight and fruit rot.

‘Norman’ is midseason in ripening and, thus, later than many southern highbush cultivars; in addition, it is not as low in chilling as many current cultivars. ‘Norman’ plants are semiupright in growth and vigor was similar to or higher than comparison cultivars at Clarksville (Table 1). ‘Norman’ had earlier bud swell (stage 2–3; Spiers, 1978), resulting in frost damage to developing buds and resulting flower development in some years in Arkansas, the only major drawback in its performance during testing. Bud swell date averaged 17 Feb. at Clarksville, compared with 2 Mar. for ‘Summit’, 3 Mar. for ‘Duke’, and 10–14 Mar. for ‘Bluecrop’ and ‘Ozarkblue’ (individual year for all cultivars except Duke is shown in Table 2; these values are averages across years). Sprinkler irrigation may be required for full yields in areas where these frost events are common.

Plant and fruit characteristics for five blueberry cultivars evaluated at the University of Arkansas Fruit Research Station (Clarksville, AR) in 2001–06.

Bud swell, and 10% and 50% bloom for four blueberry cultivars grown at the University of Arkansas Fruit Research Station (Clarksville, AR) and evaluated in 2001–06. 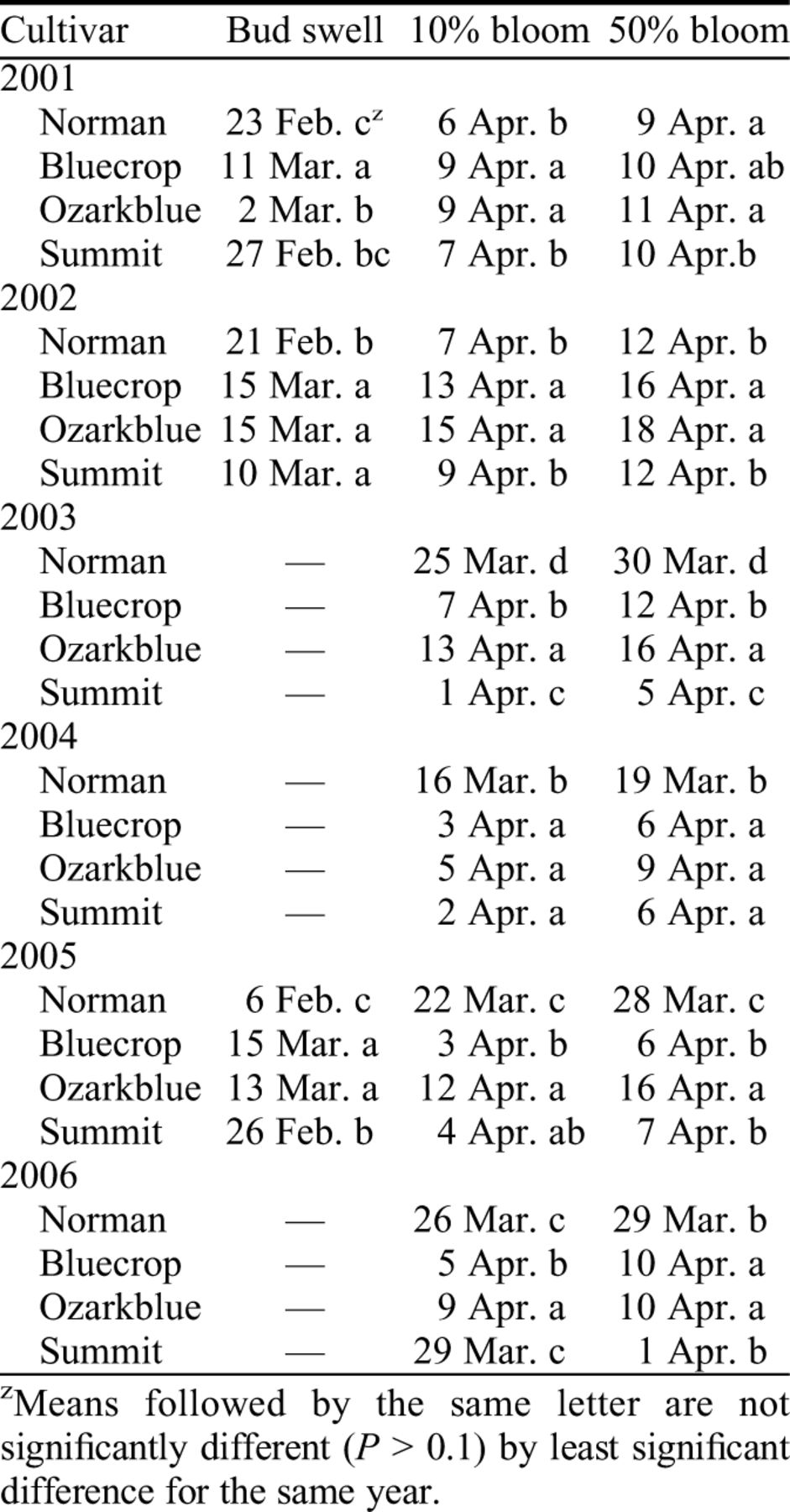 Ten percent bloom dates for ‘Norman’ were significantly earlier than those for ‘Bluecrop’ and ‘Ozarkblue’ in all evaluation years in Clarksville, but bloom dates were less consistent when compared with those of ‘Summit’ (Table 2). Fluctuations in bloom dates were observed among cultivars; for example, 10% bloom of ‘Norman’ was 3 d earlier than that of ‘Bluecrop’ in 2001 and 18 d earlier in 2004. Dates of 50% bloom of ‘Norman’ were also significantly earlier than those of ‘Bluecrop’ and ‘Ozarkblue’ and, depending on the year, were similar or earlier than those of ‘Summit’ (Table 2). Exact chilling received at Clarksville was not measured, but this is a high chill site traditionally receiving over 1000 h below 7 °C, so the differentiation of chilling among cultivars was not clearly delineated at this site. Heat units or growing degree days were not measured, so it is unknown how the plants respond to heat in early February to spring when fluctuating cold and warm days routinely occur.

Mean date when harvest passed 5%, 50%, and 95% of total harvest for blueberry cultivars planted in 2006 at the Oregon State University North Willamette Research and Extension Center (Aurora, OR) and evaluated in 2008–11. Data are means of a single three-plant plot.

At Clarksville, the yield of ‘Norman’ averaged 1.7 kg/plant across years, higher than that of ‘Bluecrop’ and ‘Summit’, but lower than that of ‘Ozarkblue’. In 2001, the first fruiting season, the yield of ‘Norman’ was 0.7 kg/plant, significantly higher than the yield of ‘Bluecrop’ (0.4 kg) and ‘Summit’ (0.2 kg) and significantly lower than that of ‘Ozarkblue’ (1.4 kg) (Table 4). In 2006, yield per plant of ‘Norman’ was almost five times higher compared with its yield in 2001 and was similar to that of ‘Ozarkblue’ and ‘Bluecrop’ and higher than that of ‘Summit’. Early budbreak resulted in freeze damage to developing buds and flowers and reduced yields to some degree (only subjective visual evaluations for damage and not quantified) in 2002, 2003, 2004, and 2006. Therefore, full yield potential was not realized at Clarksville in all years. In the OSU-NWREC trial, Norman had the highest yield of the cultivars in trial in every season after the initial season and averaged 2.6 kg/plant over these years (Table 5). In Delano, ‘Norman’ yielded 6.4 and 7.1 kg/plant in 2011 and 2013, respectively (data not shown). For comparison, ‘Springhigh’ had yields in Delano of 5.3 and 8.4 kg/plant and ‘Suzieblue’ had yields of 5.3 and 3.7 kg/plant in 2011 and 2013, respectively. ‘Norman’ did not perform well in Oxnard because of inadequate chilling and yield was not measured.

Yield and berry weight for four blueberry cultivars grown at the University of Arkansas Fruit Research Station (Clarksville, AR) and evaluated in 2001–06. Four two-plant replicated plots of ‘Norman’ were used for data collection.

Yield and berry weight in 2008–11 for six blueberry cultivars planted in 2006 at the Oregon State University North Willamette Research and Extension Center (Aurora, OR) and evaluated in 2008–11.

Blueberry fruit firmness measurement of ‘Norman’ compared with other blueberry cultivars at harvest day (day 0) and after 14 d in cold storage at ≈5 °C, years 2014 and 2015 at the University of Arkansas Fruit Research Station (Clarksville, AR). 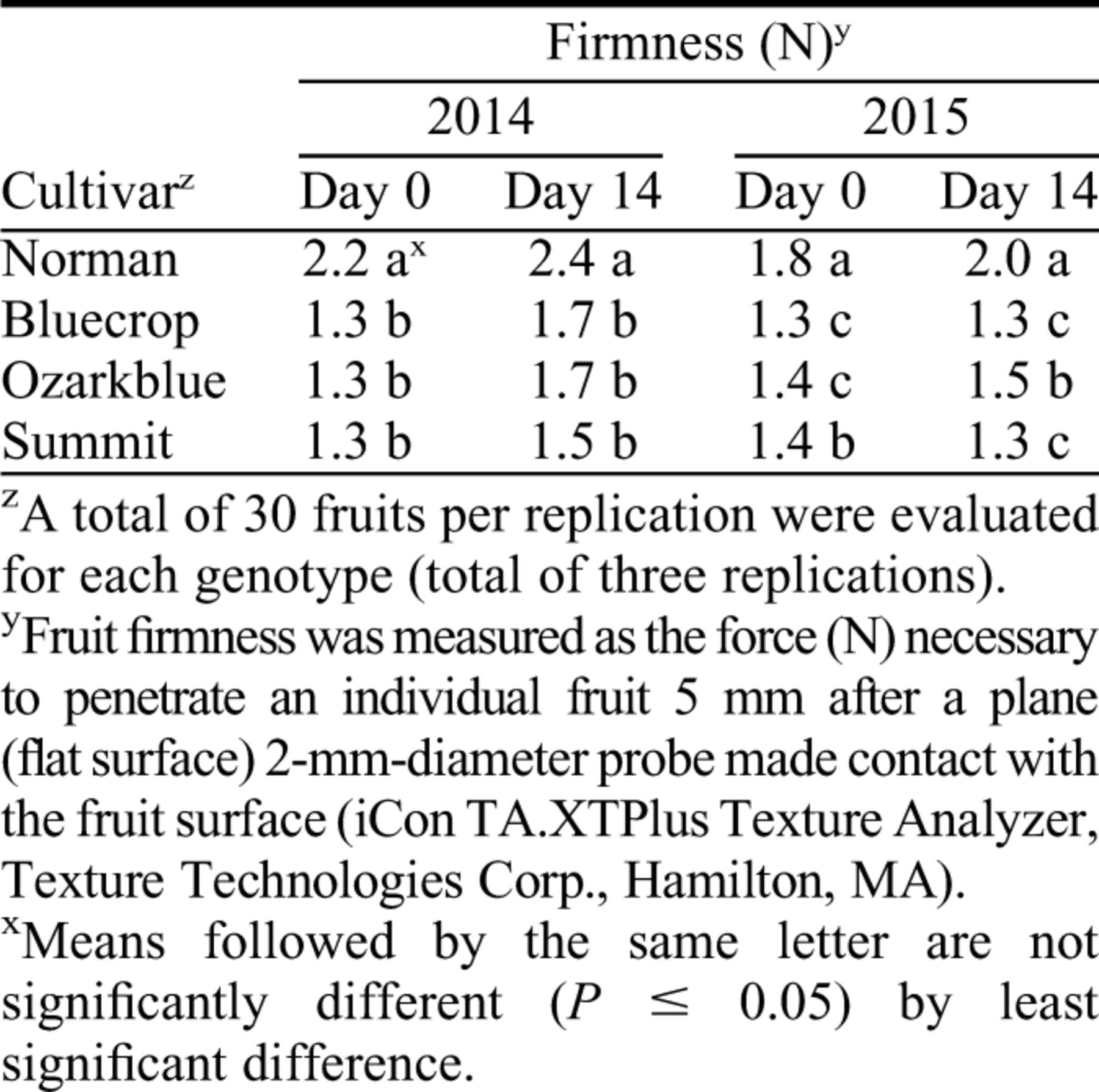 ‘Norman’ is likely adapted in areas of midchill, similar to its parent ‘Legacy’. It has good yield potential and high-quality fruit and should be evaluated with other midchill cultivars in suitable climates. ‘Norman’ is patented in the United States (Plant Patent 28502, 10 Oct. 2017). Nurseries interested in propagating ‘Norman’ can request a license agreement with the University of Arkansas System Division of Agriculture Technology Commercialization Office (https://technology-commercialization.uark.edu/about.aspx). 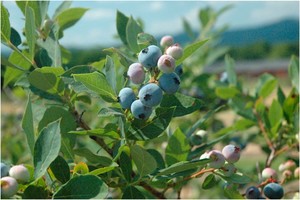