Of the current cultivars of bigtooth maple in the nursery and landscape trades, A. grandidentatum ‘Schmidt’, marketed as Rocky Mountain Glow®, A. grandidentatum Manzano™, and A. grandidentatum ‘Western Torch Wasatch Maple’ (Richards and Rupp, 2012), only Rocky Mountain Glow® is readily available (Richards et al., 2012). To help bigtooth maple become more widely used in managed urban landscapes, New Mexico State University (NMSU) is releasing A. grandidentatum ‘JFS-NuMex 3’, marketed as Mesa Glow®, a new and distinct cultivar that has an upright, well-branched form and a canopy structure that is desirable in urban settings. This cultivar is distinguished by its enhanced tolerance to drought and improved resistance to fungal diseases, faster growth, more upright form, and redder fall colors than previous bigtooth maple selections.

After 22–25 weeks (between 28 Jan. and 20 Feb. 2002) of cold moist stratification, samaras were sown in a 1:1 (v/v) mixture of peatmoss (Voluntary Purchase Groups, Bonham, TX) and perlite (Thermo-O-Rock, Chandler, AZ) in bench-top trays (Dyna-flat, A. H. Hummert, Earth City, MO) in a greenhouse at NMSU’s Fabian Garcia Science Center in Las Cruces, NM. Between 3 Mar. and 15 May 2002, all seedlings that had the first pair of true leaves visible were transplanted individually into 3-L plastic pots filled with the same growing substrate used for germination. All seedlings were assessed for quality before transplanting. Deformed seedlings and those without fully formed first pair of true leaves were culled. During germination and seedling growth, plants were fertilized with 150 mg·L−1 N every 7 d (spring to fall) or 14 d (winter) from a mixture of Peters Excel (15N–2.2P–12.5K) and Peters Professional (20N–4.4P–16.6K) fertilizers (Scotts, Marysville, OH).

From 12 Nov. 2003 and while still in the in-ground nursery production system, all remaining half-sibling plants of LMP1, LMP5, and GM2 were evaluated for aesthetic qualities such as leaf morphology, leaf color, fall foliage color development, absence of foliar tip burn, and resistance to leaf tatter. In addition, pest and disease occurrence, branching habits, and plant height were assessed. Based on the abiotic and biotic stress data, aesthetic quality assessment, and plant growth and morphological traits, three half-sibling plants—two from LMP1 and one from LMP5—were deemed worthy of further evaluation. On 28 July 2004, three tip cuttings (≈3–5 mm diameter) containing two to three nodes were selected from each of those plants, designated as NMSU 1 (LMP1, half-sibling No. 1), NMSU 2 (LMP2, half-sibling No. 2), and NMSU 3 (LMP5, half-sibling No. 1), respectively. Leaves (lamina and petiole) were excised, and cuttings were placed between moist paper towels and shipped overnight to J. Frank Schmidt & Son Co. in Boring, OR. J. Frank Schmidt is a landscape tree wholesale nursery and has introduced several ornamental maples to the U.S. landscape and nursery industry (J. Frank Schmidt & Son Co., 2013).

Subsequent testing for resilience to radiation stress revealed for the first time that bigtooth maples, especially those from the Lost Maples State Natural Area (the source of the LMP plants), have the ability to acclimate to contrasting light environments via the violaxanthin and lutein photoprotective mechanisms (Bowen-O’Connor et al., 2013).

Cuttings were veneer-grafted onto sugar maple scions and then planted into replicated experimental blocks in three different farms of the J. Frank Schmidt & Son wholesale tree nursery located in the Willamette Valley in Boring, OR. Aesthetic and production qualities of the NMSU 1, NMSU 2, and NMSU 3 clones; numerous typical seedlings of A. grandidentatum; numerous clones of Utah origin; and the established cultivar of the species Rocky Mountain Glow®, along with established cultivars of the closely related Acer saccharum (sugar maple), were compared. Production and aesthetic qualities were rated on a scale of 1 to 4 with 1 being the highest.

In the 9 years (July 2004 to July 2013) of field evaluations at J. Frank Schmidt & Son, NMSU 3 was the best performing of the three clones. On 17 Sept. 2013, the New Mexico Agricultural Experiment Station released clone NMSU 3 as A. grandidentatum ‘JFS-NuMex 3’. ‘JFS-NuMex 3’ was fast growing and had the best nursery growth rate and branch structure of all the other A. grandidentatum selections in the test. Growth rate of ‘JFS-NuMex 3’ is almost comparable to that of sugar maples. The plant is upright and well branched, resulting in a desirable canopy (Fig. 1A and B). A desirable tree canopy is judged to be one where the collective architecture of the foliage, branch, and tree trunk produces uniform cover when viewed from multiple angles. ‘JFS-NuMex 3’ production and aesthetic quality rating from 29 July 2004 to 27 July 2012 averaged 1.3 and 1.4, respectively. The performance of ‘JFS-NuMex 3’ (12 individual clones) was compared with the established cultivar, Rocky Mountain Glow®. An example of the data that were collected on two dates for an individual clone of ‘JFS-NuMex 3’ planted on farm South Farm, block 9E, row 045S26, and how the data compared with Rocky Mountain Glow® is given in Table 1. ‘JFS-NuMex 3’ has shown improved resistance to tar spot fungus and powdery mildew, both common diseases of A. grandidentatum in its natural range. ‘JFS-NuMex 3’ was shown to be marginally cold hardy in USDA Cold Hardiness Zone 5. The range of average annual minimum temperatures for Zone 5 is −28.9 to−23.3 °C.

Morphological and aesthetic qualities of a selected clone of Acer grandidentatum ‘JFS-NuMex 3’ as evaluated on 27 July 2005 and 10 May 2007. A comparison with Rocky Mountain Glow®, the established cultivar of bigtooth maple, is given.

About 5% graft union incompatibility was noted in test plots. However, this occurs early in the life of the tree, so incompatible trees can be culled in the nursery. While of concern, this level of graft incompatibility is manageable during nursery production and will not represent a landscape problem.

Mature leaves have five well-developed palmate lobes and two smaller proximal lobes (closest to the petiole) each with acuminate tips that are characteristic of the taxa (Fig. 1C and D). The leaf base is acute. The average length from the apex to the petiole of the simple leaf is 10.8 cm. Average leaf width is 7.3 cm. In summer, the adaxial surface of mature leaves is glossy and has a dark green color that corresponds to 137B on the Royal Horticultural Society (RHS) Color Chart (Royal Horticultural Society, 2001). The adaxial leaf surface is glabrous and the abaxial leaf surface is pubescent with unicellular trichomes that are prominent along the veins. Veins on the mature leaves are yellow green (153B on the RHS Color Chart). Petioles on mature leaves are red (RHS 46A) (Figs. 1C, D, and 2A). Fall color develops later than most seedlings and selections of the species. Fall color varies from yellow orange (RHS 16A) to deep red (RHS N34C), and ‘JFS-NuMex 3’ was the reddest bigtooth maple selection that has been observed in the test plots in Boring, OR.

Spring foliage color on the abaxial leaf surface is light green (RHS 138B). The newly emerged foliage are grayed-orange (RHS 177A) and glossy (Figs. 1C and 2A). Young twigs on the stems of the plant’s current season growth are grayed-orange (RHS 176A) (Fig. 2A). The bark on mature stems is brown (RHS N200B). The fruit is a double samara and has a samara angle of 44°. Individual samaras average 0.5 cm wide at the broadest part of the membranous wing and average 2.0 cm in length. Samara color varies from green (RHS 141C) when immature to brown (RHS 200C) when mature.

Young twigs (A) and fall foliage (B) of Acer grandidentatum ‘JFS-NuMex 3’. 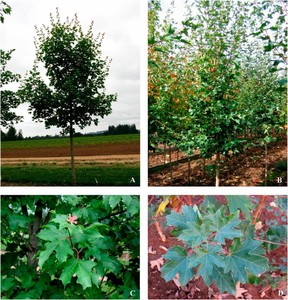