Search for other papers by Michael A. Arnold in
ASHS
Google Scholar
PubMedClose

The genus Hamamelis L. (Hamamelidaceae R. Br., the witchhazel family) is represented by about six species distributed across the temperate regions of North America and Asia (Wen and Shi, 1999; Leonard, 2006). Although as many as 15 species are reported (Wiesrma, 2017), such as Hamamelis macrophylla Pursh. and Hamamelis mexicana Standl., morphological and phylogenetic analysis support a monophyletic clade of Hamamelis with six species (Li et al., 2000). Hamamelis species are large shrubs or small trees bearing characteristically narrow, strap-like flower petals and capsulate fruit that co-occur with flower buds and flowers. North American species include Hamamelis vernalis Sarg. (vernal or Ozark witchhazel) which is found in the Ozark Mountains of Oklahoma, Missouri, and Arkansas and in Texas; Hamamelis virginiana L., widely distributed in rich but dry woodlands from southern Canada into the eastern and central United States; and Hamamelis ovalis S.W. Leonard (bigleaf witchhazel), a new species represented by a few populations in Mississippi and Alabama (Leonard, 2006). Hamamelis vernalis is smaller than H. virginiana and is grown as an ornamental plant in U.S. Department of Agriculture (USDA) hardiness Zones 3–8 (USDA, 2012). It flowers from December to March and has fragrant, orange-red flowers. Hamamelis virginiana is a medium to large shrub producing lemon-yellow flowers from October to December. Hamamelis ovalis is a large-leafed, creeping shrub producing orange-red flowers.

Production and adoption of witchhazel is often hampered by production difficulties and a displeasing, irregular, open form of many cultivars in the landscape. Seedling rootstocks are used for bud grafting of desired cultivars, and rootstock selection is limited by the tendency of witchhazel to produce sprouts from the root crown collar. Other limitations of witchhazel, especially H. virginiana, include leggy, spreading forms, previous season’s foliage retention during flowering, and susceptibility to foliar diseases such as powdery mildew (Podosphaera biuncinata Cooke and Peck) and leaf blight (Phyllostichta hamamelidis Cooke ex G. Martin) in nursery production in the eastern and southeastern United States. Considerable improvement is warranted for quality and abundance of flower and the absence of foliage during the flowering period (Dirr, 2009). Ease of propagation and tolerance to foliar diseases in production would facilitate the adoption of an improved North American witchhazel.

‘Sunglow’ was identified in a seedling row of H. virginiana planted at Tennessee Technological University in 1988 after purchasing bare root dormant seedlings from Boyd Brothers Nursery. The seedling was noticed for its upright habit and dense blooming. In 2014, plants of this selection were sent for evaluation to nursery and university cooperators in Alabama, Georgia, Michigan, Minnesota, North Carolina, Ohio, Tennessee, and Texas. After evaluation in these locations, this selection was released in 2017 under the name ‘Sunglow’. ‘Sunglow’ is a release of the woody ornamental improvement program at the U.S. National Arboretum’s McMinnville, TN worksite, which is located at the Tennessee State University Otis L. Floyd Nursery Research Center.

Hamamelis virginiana ‘Sunglow’ prefers moist, moderately fertile, well-drained soil. It is hardy in USDA hardiness Zones 4–8, although flowering may be reduced in Zone 4. Young plants can be tender and should be protected in Zones 4 and 5; stems and buds may be injured when winter temperatures reach −6.7 °C. This cultivar thrives in full sun and may be grown in full sun to shade.

American witchhazel is a native shrub covering much of the Eastern United States and is often used in naturalized situations, such as a shrub borders or against large buildings. This new release is well suited to a variety of landscape uses, including as background plantings in the shrub border, specimen plants, a deciduous hedge or screen, mass plantings in larger areas, or as part of a native plants display garden. The dense floral display, upright habit, small spread (only 2.4 m wide after 12 years), and lack of root sprouting makes ‘Sunglow’ an attractive choice for residential landscapes.

‘Sunglow’ plants are suitable for field and container production and will produce flowers on small plants the first growing season after propagation. Difficulty in rooting witchhazels may hinder their adoption by the nursery industry. There is very little information regarding rooting cuttings of American witchhazels. Dirr (2009) reported as low as 2% to 5% rooting success for H. virginiana, whereas Lamb (1976) reported rooting percentage of H. virginiana ranged 55% to 75% (based on substrate type) and H. mollis ranged 50% to 90%, with all cuttings receiving 8000 ppm indole-3-butyric acid (IBA).

A preliminary rooting study conducted at the Tennessee Technological University in Cookeville, TN, after the selection of the ‘Sunglow’ mother plant in 1992 yielded 90% to 100% rooting with 5000 and 10,000 mg·L−1 K–IBA (potassium salts of indole butyric acid; Sigma-Aldrich Chemical, St. Louis, MO) in a 50% peatmoss: 50% perlite substrate using 10 cm terminal cuttings collected on 15 Apr. (Fig. 3). Cuttings collected on 15 May and 15 June averaged 40% and 15% rooting success, whereas cuttings collected in July 15 did not root after 10 weeks. These data indicate softwood cuttings at 5000 to 10,000 mg·L−1 K–IBA root well, with a quick drop in rooting success thereafter. In a follow-up study, three species of witchhazels were evaluated in a rooted cutting experiment in McMinnville, TN in 2017. Stem cuttings were collected from mature (3-year old) container-grown stock plants of H. virginiana ‘Sunglow’, H. vernalis ‘Amethyst’, and Hamamelis ×intermedia ‘Westerstede’. Stock plants were pruned for rejuvenation (Apr. 2017) and semihardwood stem cuttings were collected when stems would bend back but not snap [23 June (‘Sunglow’) and 6 July (‘Amethyst’ and ‘Westerstede’)]. Two-node terminal stem cuttings ≈7 cm in length were assigned an IBA (3-s basal dip; Dip’N Grow Liquid Rooting Concentrate; Dip’N Grow, Clackamas, OR) treatment of 0, 1000, 4000, or 8000 ppm IBA (25 cuttings per treatment per species). Cuttings were stuck in 72 cell flats (one cutting per cell; PROP-72-RD; T.O. Plastics, Inc., Clearwater, MN) filled with a one peatmoss: one perlite substrate amended (3.6 kg·m−3) with Nutricote Total 18-6-8 (6 month formulation; Florikan LLC; Sarasota, FL). Rooting percentage was calculated 4.5 months after sticking cuttings. Hamamelis virginiana ‘Sunglow’ rooting percentage averaged 63% for all four treatments but IBA concentration had no effect on rooting percentage (Table 1). ‘Amethyst’ and ‘Westerstede’ averaged 47% and 21% rooting, respectively. The continued high percentage of rooting for ‘Sunglow’ in both the 1992 and 2017 experiments indicates this is a stable response which is not associated with relative juvenility of the clone in the 1992 experiment.

In summary, H. virginiana ‘Sunglow’ was selected for its upright habit, large, profuse blooms, continued bloom after leaf drop, lack of root sprouts, foliar disease resistance, and ease of propagation. Softwood and semihardwood cuttings of ‘Sunglow’ rooted at an average rate of 80% and 63%, respectively, in preliminary studies. Lack of root sprouts ensures this cultivar may be used as a rootstock or own-rooted, which offers flexibility and appeal to growers. ‘Sunglow’ will be available to the retail market in 2019.

Like all woody ornamental plants released from the U.S. National Arboretum, ‘Sunglow’ is not patented so may be propagated and sold freely. Plants are available through wholesale, mail order, and a limited number of retail nurseries (source list available on request). The U.S. National Arboretum does not have stock plants of ‘Sunglow’ available for general distribution, but can provide a limited number of rooted cuttings to interested propagating nurseries.

Rooting percentages of Hamamelis virginiana ‘Sunglow’ stem cuttings taken at monthly intervals treated with 0, 5000, or 10,000 mg·L−1 of K–IBA after 10 weeks in 2-inch containers under intermittent mist in Cookeville, TN, n = 10. 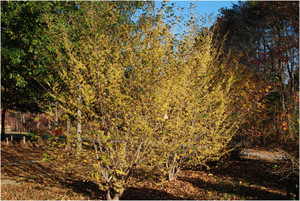 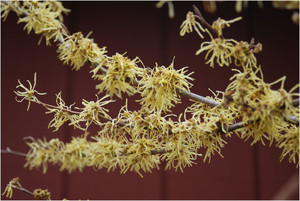 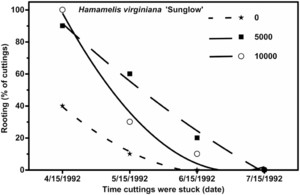