‘Taichung No. 2’: A Heat-tolerant Radish Cultivar

The radish (Raphanus sativus L.), a temperate annual crop of the Cruciferae family originating from East Asia and the Mediterranean, is a popular vegetable worldwide and is rich in iron, calcium, and vitamin B (Kitamura, 1958). It has been ecologically classified into five varieties. Among them, Raphanus var. longipinnatus Bailey (root radish), Raphanus var. radiculus DC. (cherry radish), and Raphanus var. oleifermis Pers. (leaf radish) are commonly consumed as fresh food (Kaneko et al., 2007; Yamagishi et al., 1998). The optimal growth temperature for most radishes lies at 24 °C, with fleshy storage organs reducing in size at higher temperatures (Suzuki, 1978).

Objectives in radish breeding have focused on ecological traits, such as environmental stress tolerance, disease resistance, bolting resistance, cultivating practical adaptability, and consumptive requirement (Kaneko et al., 2007; Masato et al., 2005). Increasing temperature is a critical problem for radish production in Taiwan, especially during the summer season. High temperatures lead to an array of anatomical, morphological, physiological, and biochemical changes in certain crops, including radishes, which affect their growth and development, ultimately resulting in drastic yield reduction (Hall, 2001; Wahid et al., 2007). Thus, the development of heat-tolerant radishes has the potential to provide a long-term solution for coping with a warming environment, especially in Taiwan and other regions with subtropical and tropical climates (Kuo, 1999).

Because of its self-incompatibility, radish is cross-pollinated, which results in a high level of genetic variation (Muminovic et al., 2005). During breeding, mass selection is generally inefficient, and pure-line selection frequently results in inbreeding depression and sterility. However, maternal-line selection (MLS), a modified application of mass selection, is an effective breeding method for the improvement of local varieties for certain environmental adaptations (Raymond, 1985).

The Taichung Agricultural Research and Extension Station (TDARES) announces the release of the ‘Taichung No. 2’ radish, an open-pollinated cultivar for fresh root production. This cultivar was developed using a series of MLSs, evaluated using both field and physiological performances. Radish ‘Taichung No. 2’ is highly heat tolerant with a great root quality and can be sown from April to October in tropical Taiwan.

All breeding, selection, and performance studies were conducted in field conditions in TDARES (lat. 24°08′N, long. 120°32′E) since 2004. Thirty-six radish germplasms, including commercial cultivars and breeding lines collected from Japan, Korea, Malaysia, China, and Taiwan, were evaluated for their potential as summer radish cultivars in June 2004 (average temperature 28.2 °C, maximum temperature 32.3 °C, 13-h daylengths). Horticultural characteristics, such as root shape, root weight, cortex thickness, taste, yield, and calcium deficiency, were recorded, and cell membrane thermostability (CMT) was measured according to the method by Yeh and Hsu (2004).

Two accessions, F1 ‘Mascot’ (Known-You Seed Co. Ltd., Kaohsiung, Taiwan) and S4 pure line 1993-11, were selected as female and male parents based on desirable plant characteristics and heat tolerance then hybridized using bud pollination in Dec. 2005. Maternal-line selection was applied to filial generations for a total of six generations (MLS1–6) proceeding from 2006 to 2011. Each offspring population was selected, 20 superior and 100 sub-superior plants then open-pollinated by bees in the net house. It followed by a 2-year comparative test for elite lines in the summers of 2012 and 2013. Afterward, line 2013-9 was obtained based on its overall performance. Regional trials, disease resistance, and distinctiveness, uniformity, and stability (DUS) testing of 2013-9 were conducted in 2013, and the cultivar was named Taichung No. 2 after performance studies.

The time from sowing to harvesting of radish ‘Taichung No. 2’ is ≈60 d in summer and 65 d in winter. The edible root is long and rectangular with a rounded tip. The root weight, length, and width are 675 g, 24.6 cm, and 7.0 cm, respectively. The epidermis is white and smooth with a less fibrous root (Fig. 1A). It has a mild spicy and slightly sweet taste. In addition, the leaf of ‘Taichung No. 2’ is narrow and oblong-shaped with shallow incisions of margin and a wrinkled surface. It does not have trichomes on either the abaxial or adaxial sides (Fig. 1B) and can be used as a leafy vegetable. Its texture is relatively soft. The plants show well, stable and uniform performance in the field during summer season (Fig. 1C).

Traditional direct selection for heat tolerance under field conditions is generally difficult because of uncontrollable environmental factors and its time-consuming and labor-intensive nature. CMT was measured as the conductivity of electrolyte leakage from leaf discs over a range of temperatures, which is a sensitive and rapid method to evaluate heat tolerance in plants (Wu and Waller, 1983). Relative injury (RI) induced by 30 min of temperature treatment was calculated as follows: RI (%) = {1 − [1 − (Ti/Tf)]/[1 − (Ci/Cf)]} × 100, where T and C refer to the treatment and control, respectively, and subscripts i and f refer to the initial and final electrical conductivity values, respectively. A high correlation was also found between cotyledon RI at 50 °C and the yield reduction ratio at high temperatures in leafy radish (Chen et al., 2014). Figure 2 describes the RI at 50 °C of ‘Taichung No. 2’ (42.1%), which is substantially lower than that of the heat-sensitive ‘Taichung No. 1’ (70.9%). It was also lower than that of heat-tolerant control cultivar Moscot (51.4%) significantly.

A further study to evaluate heat tolerance in ‘Taichung No. 2’ was conducted using phytotrones at 25/20 °C and 35/30 °C with 12-h daylengths from June to Oct. 2013. Furthermore, field performance during summer season was also tested. The planting period was from 1 Aug. to 30 Sept. 2013 (25.2 to 33.3 °C average temperature, 13.5-h daylengths). The experiments were arranged within temperature treatments in a completely randomized design with three replicates of 10 plants each. SAS software (SAS Institute, Inc., Cary, NC) was used to analyze the data, and t test and the least significant difference were used to compare treatments and genotypes when the analysis of variance showed significant difference between means at P ≤ 0.05.

Root characteristics and net photosynthetic rate (Pn) of radish ‘Taichung No. 2’ compared with heat-tolerant control ‘Moscot’ and heat-sensitive ‘Taichung No. 1’ cultured under 25/20 °C and 35/30 °C.

Root characteristics and net photosynthetic rate (Pn) of radish ‘Taichung No. 2’ compared with heat-tolerant control ‘Moscot’ and heat-sensitive ‘Taichung No. 1’ cultured in the field during summer season.

‘Taichung No. 2’ has been selected for use in fresh root vegetable production in subtropical and tropical climates. The time from sowing to harvesting is ≈60 d, and 6–7 kg of seeds are required per hectare of land. In the lower land of Taiwan, it is optimally planted from April to October. To prevent flowering at the seedling stage, cultivation in cooler winter months is not suggested.

A Taiwan Plant Breeder’s Right of ‘Taichung No. 2’ has been granted by the Council of Agriculture, Executive Yuan, Taiwan (ROC) in 2017 and technological transferred to Known-You Seed Co. Ltd. for commercial production and sale. A limited quantity of seed may be available for research purposes only by sending a request to the first author (chenwl@tdais.gov.tw).

Plant performance of Radish ‘Taichung No. 2’ (left) and heat-sensitive ‘Taichung No. 1’ (right) in the field of Taichung District Agricultural Research and Extension Station from 1 Aug. to 30 Aug. 2013. 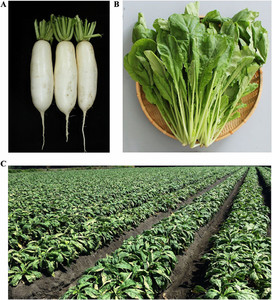 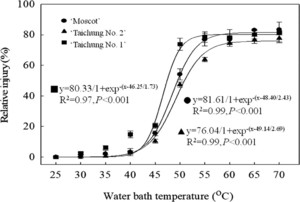 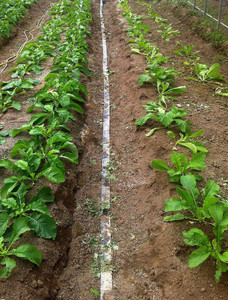