Search for other papers by Bernadine C. Strik in
ASHS
Google Scholar
PubMedClose

‘Compassion’ seedless table grape is the newest cultivar (Vitis hybrid) released by the University of Arkansas Division of Agriculture, bringing to 13, the total number of releases from the program (Clark, 2010; Clark and Moore, 2013). It joins ‘Hope’, ‘Faith’, ‘Joy’, and ‘Gratitude’ in the recent inspiration series of table grapes from Arkansas. This cultivar expands options for table grape growers for local markets in the United States. This new development provides a substantial advancement in fruit crispness and firmness beyond that of previous Arkansas developments as well as an exquisite fruity flavor. It has green (white) skin and has shown limited fruit cracking or splitting in the climate of Arkansas. It has also shown consistent production and overall vine adaptation. In addition, ‘Compassion’ showed good performance and adaptation to the Willamette Valley, OR (Vance et al., 2017). ‘Compassion’ should be adapted in the mid- to upper-South and Pacific Northwest (PNW) of the United States but could be further evaluated for adaptation and hardiness in the lower Midwest, east of the Cascade Mountains in the PNW, or similar environments in the United States and the world. It is envisioned that ‘Compassion’ will be best used by local-market growers in areas where it is adapted.

A single, own-rooted, three-vine observational plot of this selection was established at FRS on a fine sandy loam soil the year after selection, and fruit was evaluated on these vines beginning in 2009. Vines of the cultivars Jupiter, Faith, Hope, Joy, Mars, Neptune, and Gratitude were also present in the evaluation vineyard, although vines were older than ‘Compassion’. All vines were trained to a bilateral, high-cordon/curtain training system and pruned to three- to four-bud spurs annually. Vines were spaced 2.4 m within rows and 3.1 m between rows. Data were collected on ‘Compassion’ and the comparison cultivars in this plot for most variables and cultivars from 2009 to 2016. Subjective ratings including berry size, texture, flavor, cluster size and fill, along with vine crop, vigor, and health were performed each year on this plot using a scale of 1 to 10 with 1 being very poor for the character rated and 10 being exceptional or usually most desired. One character where a 10 is not desired is cluster fill, where a 10 rating represents a very tight cluster that is less optimal because of possible difficulty in handling and increased concern for disease development. A cluster rating of 7–8 is more desirable for this trait. In addition, for vigor, a rating of 9 or 10 reflected excessive vigor and a rating of 7–8 is again usually more desirable. Objective data were collected for berry weight (average of 25 berries per cultivar), cluster weight (average of five clusters), and percent soluble solids (measured on juice extracted from a 25-berry sample) for 2009–16. Means and sds were calculated over multiple years for each variable and cultivar. In addition, a replicated trial consisting of four two-vine replications (same spacing as three-vine plots) of own-rooted vines of ‘Compassion’ and ‘Jupiter’ arranged in a randomized complete block design was established in 2010, with one vine in each replication used for data collection for budbreak date, harvest date, yield, cluster and berry weights, and percent soluble solids. Data were collected in this planting for 2012–16 and were analyzed by using analysis of variance and mean separation by least square means (5% level of probability) (SAS, 2012). Overall, winter low temperatures ranged from −17 (Winter 2011) to −8 °C (Winter 2013) during the evaluation of the cultivars. Most cultivars survived these winter lows with no to minimal winter damage (winter injury observations were made at fruit maturity each year). Fungicides were applied similar to a commercial requirement to control black rot (Guignardia bidwellii Viala & Ravaz), powdery mildew {Erysiphe necator Schw. [syns. Uncinula necator (Schw.) Burr., Erysiphe tuckeri Berk., Uncinula americana Howe, and Uncinula spiralis Berk. & Curt; anamorph Oidium tuckeri Berk.]}, downy mildew (Plasmopara viticola Berl. & de Toni), and anthracnose (Elsinoë ampelina Shear) in seedling and selection plantings. Insecticides were applied as needed to control climbing cutworm (several common species including Agrotis ipsilon Hufnagel, Feltia jaculifera Guenée, and Peridroma saucia Hübner) and grape berry moth (Paralobesia viteana Clemens). However, the last application of any fungicide was usually performed near the end of June to early July, 4–7 weeks before harvest depending on cultivar harvest date, because of the evaluation vineyard having genotypes that ripened from mid-July onward requiring the discontinuation of applications. Weeds were controlled by using applications of preemergence and postemergence herbicides annually. All vines received drip irrigation as required. Vines were fertilized annually in March or April with nitrogen or a complete fertilizer. No storage evaluations of fruit were performed on any cultivars in Arkansas, nor were growth regulators such as gibberellic acid used in trials to alter berry or cluster characteristics as often practiced in commercial table grape production.

Berries of ‘Compassion’ are green (white) at full maturity (Royal Horticultural Society yellow-green group 145A) and are consistently uniform in color (Fig. 2). Fruit has been noted to have reduced green color when exposed to direct sunlight at maturity. Fruit ripened from early August (the early year of 2012) and into September (the late year of 2014), with an average midseason harvest date of 22 Aug. ‘Compassion’ usually ripened 2 weeks later than the cultivar Jupiter (Table 1) and near that of ‘Hope’ (Clark and Moore, 2013). In Oregon, average harvest date ranged from 2 Sept. at LB to 4 Sept. at NWREC (Vance et al., 2017). ‘Compassion’ berry size was rated comparable with or slightly larger than other cultivars. Berry weight averaged 4.6 g in the observation plot and ranged from 4.9 to 6.3 g in the replicated trial (Tables 1–3). Berry weight was similar to or greater than ‘Jupiter’ depending on the year (Table 1). In Oregon, berry weight ranged from 3.4 (LB) to 5.1 g (NWREC) when averaged across years (Vance et al., 2017). Berries are elongated-oval in shape. Berries are seedless, with small residual seed traces seen in most years; however, the crisp texture reduced the noticeability of the traces. Fruit texture is a non-slipskin type, rated higher than all comparison cultivars except ‘Gratitude’ (Table 3). Crisp texture is one of the most outstanding attributes of ‘Compassion’. Skin thickness of ‘Compassion’ is more noticeable than conventional California table grape cultivars, but skins are thinner at full maturity than most other Arkansas cultivars. Flavor was rated 8.6, comparable with ‘Jupiter’ and higher than most comparison cultivars (Table 3). Flavor is fruity, with some aspects of muscat. ‘Compassion’ represents the most substantial achievement in the combination of crisp texture and unique fruity flavor in cultivars released from the Arkansas table grape breeding program. Astringency was rarely noted in the flavor of ‘Compassion’. Berry soluble solids averaged 20.0% in the three-vine plot samples and ranged from 19.5% to 23.3% in the replicated trial (Tables 1 and 2). In Oregon, soluble solids averaged 20.0% for all years and locations (Vance et al., 2017).

Subjective (qualitative) ratings (with sds) for ‘Compassion’ and seven comparison table grape cultivars over 8 years (2009–16), Fruit Research Station, Clarksville, AR, from three-vine selection plots. Ratings determined on a scale of 1 to 10, with 1 being very poor for the character and 10 being exceptional or most desired. Exceptions were cluster fill rating, which ranged from very loose (1) to very compact (10) with excessive compactness being undesirable for cluster fill, and vigor where a rating of 9 or 10 reflected excessive vigor.

Fruit cracking or splitting is one of the major challenges in table grape production in climates where rainfall occurs during fruit maturation. ‘Compassion’ berries usually did not crack after occasional summer showers near harvest in Arkansas, although in severe rainfall pressure seasons, some cracking was seen. Fruit usually held well on the vines after maturity with some fruit rots observed in a few years at full maturity.

Fruit cluster average weight ranged from 238 to 472 g in the replicated trial (Table 1), averaged 470 g in three-vine plot samples (Table 2), and cluster size rating averaged 7.6 (Table 3), reflecting medium cluster size. ‘Compassion’ clusters were significantly larger than ‘Jupiter’ in 3 of 5 years in the replicated trial and larger than all other cultivars except ‘Gratitude’ in the three-vine plot comparisons. Oregon cluster weight ranged from 316 (LB) to 391 g (NWREC) (Vance et al., 2017). Cluster fill rating averaged 8.8 (Table 3), indicating well-filled to tight clusters. Tight clusters can be a concern because of fruit rot tendencies when berries are closely spaced. Also, tight clusters can be more challenging in packing because of reduced flexibility. No trials of berry thinning using gibberellic acid were included in the testing of ‘Compassion’ but might be considered in reducing cluster fill.

Vines of ‘Compassion’ were moderately productive, with fully mature vines yielding 7.4–15.3 kg/vine, comparable with or higher than ‘Jupiter’ (Table 1). Average crop load rating was lower for ‘Compassion’ (6.4) than other cultivars in the three-vine plots, and this should be noted for careful management for adequate yields. Oregon yields ranged from 8.8 to 10.6 kg/vine depending on the location (Vance et al., 2017). Date of budbreak was 6–10 d later than ‘Jupiter’, a very desirable trait which can contribute to less risk of frost damage to developing buds (Table 1). Vine vigor rating averaged 7.6, indicating good vine growth but not excessive vigor (Table 3). Vine health rating was 8.4 (Table 3), indicating vines had good leaf color, usually no disease presence, and consistent year-to-year health even with low winter temperatures. Although fungicides were applied in the research vineyards, diseases such as powdery and downy mildew are occasionally seen. During the years of evaluation of ‘Compassion’, downy mildew was especially severe in 2013 when ‘Jupiter’ was observed to have severe leaf infection. However, no downy mildew was noted on any vines of ‘Compassion’. In 2015, powdery mildew was quite severe and ‘Compassion’ was observed to have slight infection on leaves on some vines, possibly indicating reduced susceptibility to this disease. However, vines of ‘Compassion’ and other Arkansas-developed table grapes are required to have fungicide applications to ensure reliable cropping, and full disease resistance was not evaluated during the development of these cultivars. No crop loss due to winter cold occurred for ‘Compassion’. No substantial spur, cordon, or trunk damage were observed when exposed to a low of −17 °C. The hardiness of ‘Compassion’ is not known for colder environments.

Although no postharvest storage of ‘Compassion’ was conducted in Arkansas, storage of ‘Compassion’ in Oregon was carried out in 2015 and 2016. Procedures included placing five-cluster samples in vented plastic bags that were kept in a cooler maintained between 1.1 and 2.7 °C for 3–4 weeks. Of the cultivars tested, ‘Compassion’ stored the best, followed by ‘Gratitude’ and ‘Hope’ and ‘Joy’ and ‘Faith’ (Vance et al., 2017).

‘Compassion’ will be patented and licensed to domestic nurseries. Vines should be available in a limited number in the winter of 2017–18 and more widely available in subsequent years. 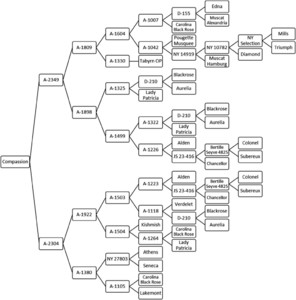 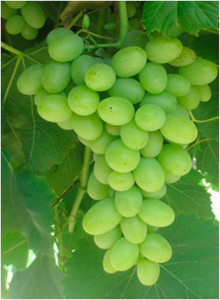