The genus Capsicum is native to the tropics of Central and South America. Pepper cultivation is ancient in the Americas where they were valued for their culinary and medicinal properties (Pickersgill, 1969a, 1969b). Peppers were introduced to Europe by Columbus, and subsequently to Africa and Asia by the extensive trading routes of the Spanish and Portuguese. When introduced to Europe in the 15th century, peppers were held in higher esteem as an ornamental plant than as a food source. Ornamental peppers as potted or bedding plants and a florist crop are still popular today (Stommel and Bosland, 2005).

Ornamental peppers have been known as “Christmas peppers” for many years in the floriculture industry (Harthun, 1991). Pepper plants with vibrant green foliage and bright red fruits have traditionally been sold during the winter holiday season. Ornamental peppers with their bright contrasting colors and edible fruits were the most popular Christmas gift plant until the 1960s when the poinsettia industry began to introduce and promote improved poinsettia cultivars.

Modern ornamental peppers exhibit considerable diversity in plant habit and morphology. Plants range in size and shape from short, compact plants with small fruit, such as ‘Holiday Cheer’, to plants as tall as three to four feet, with full-sized fruits, such as ‘NuMex Mirasol’. This diversity, together with assorted ripe fruit color and varying hues of green to purple to black foliar pigmentation, affords a myriad of opportunities to develop unique ornamental cultivars suitable for use as potted types, bedding and garden plants, and cut stems.

Ornamental peppers grown as potted plants are widely marketed for retail sale in the fall and winter months. Availability of compact plants with colorful fruit, ease of propagation from seed, relatively short cropping time, heat and drought tolerance, and excellent keeping quality are valuable attributes of ornamental peppers for commercial propagators. As bedding and garden plants, heat and drought tolerance and vibrant colors, have made ornamental peppers popular as border or specimen plants, or in mass plantings.

The Christmas Lights series of cultivars are diploid (2n = 2x = 24) herbaceous annuals. The individual cultivars exhibit uniform morphology and breed true from seed. These cultivars have performed stably in multiple trials during later stages of cultivar development. Data reported here were collected from 2014 and 2015 trials in Beltsville, MD, and describe relevant ornamental attributes (Tables 1 and 2). Comparative data are provided for the ornamental peppers ‘Black Pearl’ (Stommel and Griesbach, 2005) and ‘Pepper Jack’ (Stommel and Griesbach, 2008).

Plant habit for ‘Christmas Lights Blue/Red’, ‘Christmas Lights Blue/Orange’, ‘Christmas Lights Yellow/Red’, and ‘Christmas Lights Yellow/Orange’ is compact and upright. Plants averaged 39.9–48.4 cm in diameter and 21.9–31.2 cm in height in 2014, and 58.6–70.2 cm in diameter and 32.5–42.8 cm in height in the 2015 trials. A relatively smaller plant size in 2014 occurred on nutrient poor sandy soils. Despite smaller plant size in 2014, the cultivars maintained their characteristic ornamental qualities across the trials. Plant height/diameter ratios (0.5–0.7; 75 d posttransplanting) were similar for the 2014 and 2015 trials. Plants of these cultivars are shorter than ‘Black Pearl’ and ‘Pepper Jack’ with height/diameter ratios less than ‘Black Pearl’.

Roots of the Christmas Lights series of cultivars are fibrous and leaves are lanceolate with an apiculate tip. Leaves and stems are glabrous and glossy. Leaves are simple, entire, and symmetrical. Mature leaves averaged 5.8–7.4 cm in length and 2.7–3.2 cm in width in 2014, and 7.3–7.7 cm in length and 3.2–3.6 cm in width in the 2015 trials. Leaf length/width averaged 2.1–2.4 and was similar for both the 2014 and 2015 trials. Petiole length averaged 2.8–3.4 cm for both the trials. Leaf size was comparable with ‘Pepper Jack’ and smaller than ‘Black Pearl’ and similar in shape to both ‘Pepper Jack’ and ‘Black Pearl’. Adaxial leaf surfaces of the Christmas Lights series cultivars are dark green (147A) (Royal Horticultural Society, 1966).

The Christmas Lights series of cultivars produce a flush of full-size immature fruit in ≈50 d from transplanting that mature to red or orange fruit color in ≈70–75 d after transplanting under good growing conditions (see Culture section). Additional fruit will continue to develop and ripen until frost in nonprotected environments, providing an attractive display of immature and mature fruit colors. Cultivars of the Christmas Lights series bear mature fruit ≈10-days earlier than ‘Pepper Jack’ or ‘Black Pearl’. Fruit are pungent. Scoville pungency units were not determined because these cultivars are intended for ornamental applications.

The Christmas Lights cultivar series have been trialed for use as bedding plants where their compact growth habit and brightly colored erect fruit provide an attractive ornamental display. Plants are well-suited for culture as specimen plants in outdoor beds or massed at 30- to 35-inch plant spacing. Commercial evaluations suggest that these cultivars are equally well-suited for pot culture under high light conditions. Plants are best established from transplants produced in a warm greenhouse (21 to 24 °C) where seedling emergence occurs in 10–12 d. Plants suitable for transplanting (15–20 cm tall) are ready in six weeks from seeding and prefer a well-drained loam or sandy loam soil with some organic matter and a pH range of 6.2–6.8. When grown on nutrient poor soils, supplementary fertilization improves plant vigor. Drainage is essential to reduce the incidence of soil-borne diseases such as phytophthora root rot. Similar to culinary pepper production, ornamental peppers are a warm season crop requiring minimum daytime temperatures of 18 to 21 °C (Love, 1987). Best growth is achieved at higher temperatures up to 32 °C (Bosland, 1999). Similar to many currently available ornamental pepper cultivars (Coon et al., 2017), the Christmas Lights cultivars do not require pinching or growth regulator treatments to maintain their growth habit.

Voucher seed samples of these releases will be deposited in the USDA, National Plant Germplasm System, where they will be available for research purposes, including development and commercialization of new cultivars. It is requested that appropriate recognition be made if this germplasm contributes to the development of a new breeding line or cultivar. A limited quantity of seed is available for distribution to research personnel on written request to John R. Stommel, USDA, ARS, GIFVL, BARC-West, B-010A, 10300 Baltimore Ave., Beltsville, MD 20705; E-mail: john.stommel@ars.usda.gov.

Mention of trade names or commercial products is solely for the purpose of providing specific information and does not imply recommendation or endorsement by the United States Department of Agriculture. 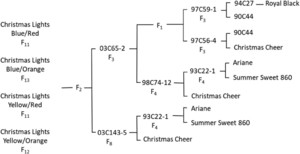 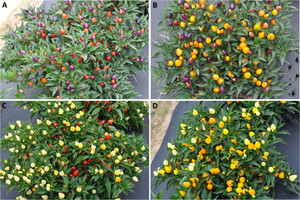