Blueberries are adapted to many areas across the southeastern United States, especially those that contain genes from native species such as Vaccinium darrowii Camp and the rabbiteye species Vaccinium virgatum Aiton (syn. Vaccinium ashei Reade). Vaccinium darrowii is typically compact in the wild and is often evergreen, whereas rabbiteye blueberries are typically deciduous and highly vigorous. Both V. darrowii and V. virgatum have been used for many years in breeding programs to develop hybrids adapted to the low-chill (<400 h below 7 °C) to mid-chill (400–800 h below 7 °C) regions of the southeastern United States. Most of the breeding has been aimed at commercial cultivars; however, homeowners also like having adapted cultivars, but they often desire plants with ornamental appeal as well. There are a number of traits that make a blueberry cultivar relevant for the ornamental industry, most having to do with aesthetic appeal for the home gardener based on some novel characteristics such as dwarf plant growth habit, fall color development, attractive berry color, or large berry size. ‘Tophat’, released for ornamental purposes in the 1970s, is a dwarf blueberry hybrid containing lowbush (Vaccinium angustifolium Aiton) and northern highbush (Vaccinium corymbosum L.) in its lineage (Moulton et al., 1977). It is still popular today for small patio areas and container gardening, but is not well adapted to low- to mid-chill growing regions. More recent ornamental releases include Blue Suede® (V. corymbosum ‘TH-682’ USPP 21222), Summer Sunset™ (Vaccinium sp. ‘T-885’ USPP 23374), and ‘Perpetua’ (Vaccinium hybrid USPP 24209) (Finn et al., 2015; NeSmith and Ehlenfeldt, 2010, 2011).

‘TO-1088’ (USPP 28467) Cutie Pie™ is a new blueberry hybrid (Vaccinium sp.) being released by the University of Georgia (UGA) for home gardeners in mid-chill regions. The new cultivar ripens later than late-season southern highbush (V. corymbosum L. hybrids), around or before the time of early ripening commercial rabbiteye blueberry cultivars. The new cultivar offers considerable visual appeal for the consumer via its compact growth habit, dense flowering canopy, and desirable fall foliage color.

‘TO-1088’ was selected in 2007 at the UGA Griffin Campus in Griffin, GA, from seedlings derived from open-pollinated ‘MS-840’ (a nonpatented breeding line). ‘MS-840’ originated from a cross of ‘Bluecrisp’ (USPP 11033) × ‘Magnolia’ (a nonpatented commercial cultivar), both of which have V. darrowii and V. virgatum in their ancestry. ‘TO-1088’ was established in multiple plant plots at the UGA Blueberry Research Farm in Alapaha and Griffin, GA, in 2008 for testing and comparing with commercial industry standards. It was planted in ornamental trials at both locations in 2011.

‘TO-1088’ (to be marketed as Cutie Pie™) is being released for home garden and landscape usage. The new cultivar has a very dwarf/compact growth habit, reaching a height of only 0.5–0.8 m and a canopy width of only 0.6–0.9 m by 4 years old (Fig. 1). Plants flower profusely, with several (6–10) flower buds per healthy fruiting shoot (Fig. 2). With good pollination conditions, ‘TO-1088’ produces an abundance of small, dark berries typically weighing 0.8–1.2 g/berry and having diameters of 8–10 mm (Fig. 3). The new cultivar generally flowers and ripens in between the late-season highbush cultivar Camellia (USPP 18151) and the early season rabbiteye cultivar Alapaha (USPP 16266) (NeSmith and Draper, 2007; NeSmith et al., 2002). In mild winters, plants often retain their older leaves, making them attractive during fall and winter as well (Fig. 4). ‘TO-1088’ has expressed moderate self-fruitfulness, but can be pollinated by either rabbiteye or southern highbush cultivars that flower at a similar time. No notable diseases or other pest problems were observed for the new cultivar that were not also common for other cultivars. ‘TO-1088’ is estimated to have a chilling requirement of 400–500 h (<7 °C) based on observations and comparisons with other cultivars.

‘TO-1088’ was compared with ‘Alapaha’ and ‘Camellia’ at two test sites in Georgia over a 2-year period (Tables 1 and 2). Berry attributes of size and color that are generally important for commercial blueberry ratings were lower for ‘TO-1088’ as expected, whereas berry firmness, scar, and flavor were comparable with the two commercial cultivar standards. The crop load of the new ornamental cultivar was also good. Thus, ‘TO-1088’ grows well in typical mid-chill blueberry production conditions, producing a moderate supply of suitable quality, good tasting fruit.

Two-year average ratings of fruit and plant characteristics of ‘TO-1088’ and standard cultivars Alapaha and Camellia (2013–14) in field test plots at Alapaha, GA. Rating scales are based on a 1 to 10 score, with 1 being the least desirable and 10 being the most desirable. Data are means ± se (n = 2). These plants were established in 2011.

Two-year average ratings of fruit and plant characteristics of ‘TO-1088’ and standard cultivars Alapaha and Camellia (2013–14) in field test plots at Griffin, GA. Rating scales are based on a 1 to 10 score, with 1 being the least desirable and 10 being the most desirable. Data are means ± se (n = 2). These plants were established in 2011.

The very compact/dwarf growth habit of ‘TO-1088’ makes the new cultivar suitable for a number of uses in home gardens and landscapes. For example, plants can be used as border plants in ornamental beds or as accent plants in a number of garden sites. The new cultivar is also useful for container gardening (Fig. 5), offering consumers in mid-chill regions a patio blueberry option in environments with limited garden space.

Dwarf hybrid blueberry ‘TO-1088’ during flowering.

Dwarf hybrid blueberry ‘TO-1088’ being grown as a container garden plant. 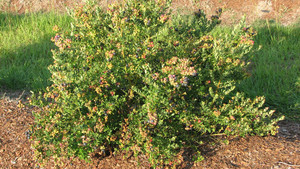 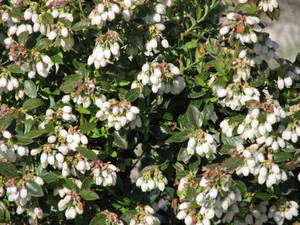 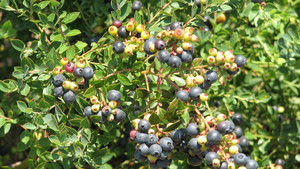 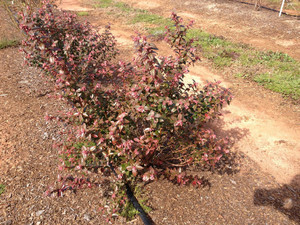 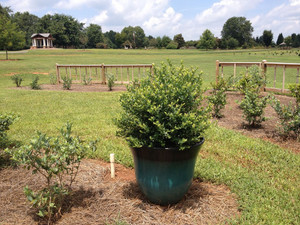