Search for other papers by Robert R. Martin in
ASHS
Google Scholar
PubMedClose

‘Kokanee’ (Fig. 1) is a new primocane-fruiting red raspberry (Rubus idaeus L.) from the U.S. Dept. of Agriculture–Agricultural Research Service (USDA–ARS) breeding program in Corvallis, OR released in cooperation with the Oregon State Agricultural Experiment Station. ʻKokaneeʼ is a high-yielding cultivar that produces large, firm fruit that are bright-red-colored and have very good, sweet flavor. The cultivar should be widely adapted to wherever primocane-fruiting raspberries are grown and has looked promising in trials as a wholesale, fresh market berry produced in tunnels in northern hemisphere, off season market regions (e.g., Mexico, Spain). An application for a U.S. plant patent (Appl. No. 14/999,027) has been submitted.

‘Kokanee’, tested as ORUS 4090-1, was selected from a seedling field in Corvallis, OR, in 2009 from a cross made in 2007 of ORUS 1173-2 × ‘Vintage’ (USPP24,198) (Finn, 2014; Finn et al., 2013) (Fig. 1). ORUS 1173-2 is a vigorous advanced selection that is productive and well adapted to the Pacific Northwest with large, somewhat “rough” (a bit asymmetrical with uneven surface) fruit that ripen late. ‘Vintage’ is a smaller, less vigorous plant than ORUS 1173-2 with outstanding flavored, bright-colored, and firm fruit (Finn et al., 2013). ‘Kokanee’ is being released primarily because of its outstanding fresh fruit quality (large, attractive, good flavor, and bright color), its adaption to handling in the wholesale fresh market, and its adaptation to production in regions as diverse as the Pacific Northwest and the central highlands of Mexico.

‘Kokanee’ has been evaluated most extensively in trials at Oregon State University’s North Willamette Research and Extension Center (OSU-NWREC, Aurora, OR) as well as observation plots with the U.S. Dept. of Agriculture-Agricultural Research Service (USDA-ARS) in Corvallis, OR, and in commercial trials in northern (Watsonville) and southern (Oxnard) California, central Mexico (Zamora), and southwestern Spain (Huelva). At OSU-NWREC (lat. 45°16′48″N, long. 122°45′3″W; USDA-ARS Hardiness Zone 8b), trials were established in 2010 and 2015 and arranged in a randomized complete block design, with three 3-plant replications (0.9 m between plants) used for measuring fresh fruit characteristics, harvest season, yield, and fruit weight. ‘Heritage’ and/or ‘Vintage’ were included as comparison cultivars. The plants were allowed to fill in the row but the hedgerow was narrowed to 0.6 m wide during the growing season and cut to ground level during the dormant season. A trellis with wires at 1.0 and 1.5 m height was used to support the canes.

Fruit were hand harvested weekly, and data collected on harvest season, yield, and average fruit weight (randomly selected 25-berry subsample per harvest) (Finn et al., 2004). The fruit-ripening season in Oregon was characterized by the dates on which 5%, 50%, and 95% of the total fruit were harvested. Subjective evaluations for fresh fruit characteristics were made at least three times each year using a 1 to 9 scale (9 = the best expression of each trait except color where 9 = dark red color, which is undesirable, as it appears overripe). The fruit ratings included firmness (as measured subjectively by hand in the field on six to eight fruit), color (ideal color is bright red and would be score 7 or 8), shape (with uniform, conic berry being ideal), coherence (the ability of the fruit to hold together when handled while being rated by hand in the field on six to eight fruit), texture (rated when chewed while tasting fruit in the field), separation (rating of how easily the ripe fruit were separated from the plant), and flavor (rated by tasting fruit in the field). Fruit were also evaluated informally as a thawed, individually quick-frozen (IQF) product by growers, processors, and researchers. Basic fruit chemistry traits, including soluble solids, pH, and titratable acidity, were evaluated in 2011–13 and 2016 on fruit frozen from two to three harvests. Duplicate subsamples of ≈200 g each were taken randomly from frozen and thawed harvested fruit and were evaluated for percent soluble solids, pH, and titratable acidity in the laboratory as described for strawberry by Mathey et al. (2013) ‘Kokanee’, ‘Heritage’, and ‘Meeker’ fruits were analyzed for anthocyanin concentrations using previously described separation and identification procedures (Lee and Finn, 2007) with the following change: longer high-performance liquid chromatography analytical column (Synergi Hydro-RP 80 Å, 250 mm × 2 mm, 4 µm; Phenomenex, Inc., Torrance, CA). Plant ratings were conducted one time each year during the fruiting season for primocane vigor and prickles (1 = numerous and large prickles; 9 = smooth, no prickles).

Yield and average fruit weight from 2011 to 2013 and 2016 were analyzed as a split-plot in time with cultivar as the main plot and year as the subplot (for the multiple year harvested trial) with mean separation by least significant difference. The planting and the analysis (PROC GLM; SAS Institute, Cary, NC) included ʻKokaneeʼ and ʻHeritageʼ, which is among the most widely grown, nonproprietary, primocane-fruiting cultivar (Daubeny et al., 1992).

‘Kokanee’ plants were scored as more vigorous than ‘Heritage’ (Table 2; Fig. 2). ‘Kokanee’s vigor and habit were more comparable to its ORUS 1173-2 parent and ‘Heritage’ than the stockier ‘Vintage’ (Table 2; Finn et al., 2013). ‘Kokanee’ canes were rated as being smoother and less prickly than those of ‘Heritage’ (Table 2). The canes showed no symptoms of disease and were not sprayed with any fungicides. ‘Kokanee’ was susceptible to phytophthora root rot [Phytophthora rubi (W.F. Wilcox and J.M. Duncan) W.A. Man in’t Veld] in screening trials at WSU-Puyallup. Multiple plots that were scored 18 months after planting (Nov. 2015) had very little noted root rot and scored well; 4.25/5.00 scale, with 5 = no symptoms. However, by 30 months after planting (Nov. 2016), the scores had dropped to 2.33/5.00 with one of three plots completely dead. ‘Kokanee’ plants in tunnel production in a subtropical environment were susceptible to powdery mildew [Podosphaera aphanis (Wallr.) U. Braun and S. Takamatsu var. aphanis U. Braun]. In research trials, ‘Kokanee’ has tested positive for Raspberry bushy dwarf virus.

Subjectively evaluated fruit quality traits and vigor for two raspberry cultivars in a replicated trial at the Oregon State University’s North Willamette Research and Extension Center and evaluated in 2011–13.

‘Kokanee’ consistently produced fruit that were around 30% heavier than those of ‘Heritage’ and comparable in size to ‘Vintage’ (Table 1) and were of similar firmness (Table 2). The fruit were an ideal color for the fresh market being bright and not as dark as those of ‘Heritage’ (Figs. 3 and 4). ‘Heritage’ and ‘Kokanee’ had similar conic fruit shape (Table 2). When picked, both cultivars had very good drupelet coherence with little or no crumble (Fig. 4). ‘Kokanee’ fruit consistently separated much more easily from the plant than ‘Heritage’ fruit but probably not easily enough to be machine harvested (Table 2).

‘Heritage’ fruit were perceived to be seedier than those of ‘Kokanee’ when eaten (Table 2). As with its parent ‘Vintage’, ‘Kokanee’ fruit were perceived to have excellent, sweet flavor, whereas those of ‘Heritage’ were scored as being bland but inoffensive. ‘Kokanee’s perceived sweetness would appear to be because of fruit with a higher pH and lower titratable acidity than ‘Heritage’ as its percent soluble solids, although high, was lower than that of ‘Heritage’ (Table 3). Although ‘Kokanee’s primary initial use is expected to be as a fresh market berry, its pH and titratable acidity were appropriate for a processed product. In informal evaluations of IQF fruit by a panel of untrained industry members and researchers, ‘Kokanee’ consistently scored similarly to ‘Vintage’ and the floricane-fruiting cultivar ‘Meeker’ for the overall quality as perceived by the panel and better than ‘Heritage’ or the floricane-fruiting cultivar ‘Wakefield’ (data not shown). In addition to the outstanding color, size, firmness, and flavor that make ‘Kokanee’ a good fresh market option, the fruit were non-darkening when stored in plastic clam shells under refrigeration (0.5 to 1.5 °C) but softened after 7 d in storage (data not shown). In similar storage trials with another company, fruit refrigerated for 7 d followed by 1 d at room temperature were rated as acceptable (74% to 85% “good” over course of the season). ‘Kokanee’ fruit harvested from the second primocane crop from plants in tunnel production under commercial conditions in a subtropical environment were smaller (4.5 g) than those of ‘Kwanza’ (5.4 g) and similar in size to those of ‘Kweli’ (4.6 g), ‘BP-1’ (Amira®) (4.1 g), and ‘Imara’ (4.1 g); had a comparable percentage of defective fruit to those of ‘Kwanza’, ‘Kweli’, and ‘BP-1’ (Amira®) (34% to 36%) but fewer than ‘Imara’ (42%); and the plant yield was comparable to that for ‘Kwanza’, ‘Kweli’, and ‘Imara’ but greater than for ‘BP-1’ (Amira®) (data not shown).

Compared with ‘Heritage’, the harvest season of ‘Kokanee’ started 10–14 d earlier, reached 50% harvest up to 5 d earlier and finished 5 d earlier to 14 d later in research trials (Table 5). ‘Kokanee’ ripened later than ‘Vintage’ and ‘BP-1’ (Amira®) in the 2015-planted trial (Table 5). In commercial trials in Mexico, Spain, and California, ‘Kokanee’ ripened later than ‘Vintage’, which was a preferable season as it was more removed from the days with the hottest temperatures (data not shown).

Mean dates when harvest passed 5%, 50%, and 95% of total yield and the length of the harvest season for ‘Kokanee’ and other cultivars picked in the same years from trials at Oregon State University’s North Willamette Research and Extension Center.

‘Kokanee’ is introduced as a high-quality, primocane-fruiting red raspberry with a bright red color, large size, and very good flavor for the fresh market and with yields comparable to or better than industry standards.

‘Kokanee’ is patent pending. When this germplasm contributes to the development of a new cultivar, hybrid, or germplasm, it is requested that appropriate recognition be given to the source. Further information or a list of nurseries propagating ‘Kokanee’ is available on written request to C.E. Finn. The USDA-ARS does not sell plants. In addition, genetic material of this release has been deposited in the National Plant Germplasm System as CRUB 2806 (PI 682652). 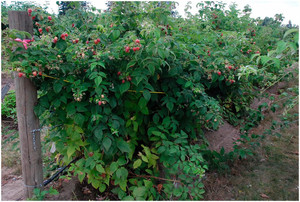 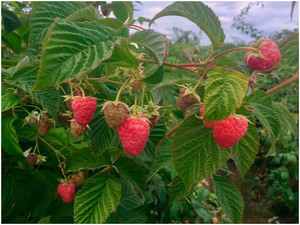 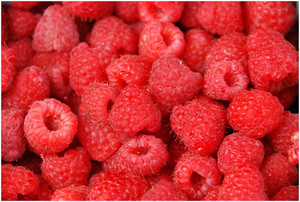