Grapevine (Vitis spp.) is one of the most important fruit crops in the world. More than 70 species of Vitis exist, which are mostly found in the temperate zones of the Northern Hemisphere. These species are distributed mostly in three regions: Europe and western Asia, North America, and eastern Asia (Alleweldt and Possingham, 1988; Mullins et al., 1992). China is one of the major gene centers of origin of the Vitis species; more than 38 Vitis species originate in China (Kong, 2004). China is a vast country with complex geographical environments that greatly differ in climate, soil, and topography. Under these conditions, there is an abundance of Vitaceae species and Vitis spp. germplasm resources. The common characteristics of the Vitis species native to China include small clusters and berries, low sugar content, high acidity, and high tannin contents (Kong, 2004). Vitis davidii is the only east Asiatic species that has large berries, and this species has excellent tolerance to anthracnose, ripe rot disease, and hot climate (He, 1999; Shi et al., 2002). People who live in the mountainous areas of Hunan, Anhui, Jiangxi, and Shanxi provinces usually plant this wild species in their courtyard as a table grape. In the recent years, V. davidii and their hybrids have been used for making wines and juice in China (Bao et al., 2010; Qin et al., 2008; Zhou et al., 2008).

In this study, we used 11 microsatellite markers and 12 SRAP combinations in 48 wild V. davidii accessions to investigate genetic polymorphisms and possible relationships.

Forty-eight accessions were collected from Hunan, Jiangxi, Zhejiang, and Anhui provinces in China. These materials were planted at the National Grape Germplasm Repository, Zhengzhou Fruit Research Institute at the Chinese Academy of Agricultural Sciences (lat. 34°42′47.52″N, long. 113°42′3.19″E). Information on the materials is listed in Table 1.

Genomic DNA was extracted from fresh young leaves using the cetyltrimethylammonium bromide method and purified in accordance with the method reported by Liu et al. (2012b), with minor modifications. This protocol was much faster and required only two to four shoot tips. The quality and concentration of the DNA samples were checked using a BioPhotometer Plus (Eppendorf, Hamburg, Germany), and a portion of the DNA was diluted to 30–50 ng·μL−1 for use in SSR and SRAP analyses. Both the stock and diluted portions were stored at −20 °C.

The amplified bands were scored as either present [1] or absent [0]. The data were entered into a binary matrix and subsequently analyzed using NTSYSpc 2.1 software (Rohlf, 2000). Coefficients of similarity were calculated using the Dice coefficient (Sokal and Rohlf, 1962), and a cluster analysis was performed using the agglomerative technique and the unweighted pair group method with arithmetic mean (UPGMA). The PIC, microsatellite allele frequencies, the number of alleles per locus (Na), the effective number of alleles (Ne), and the Ho and He as genetic parameters of polymorphism were calculated using POPGENE 32 software.

Forty-eight V. davidii accessions were analyzed using 11 polymorphic SSRs. The variability detected by each SSR locus is shown in Table 2. The total number of amplified alleles was 78, 73 of these alleles (93.6%) were polymorphic in the 48 genotypes studied. The Na ranged from 4 (UDV123) to 10 (VVMD5, VVMD7, VMC4C6, and VMC4H6), with an average of 8.8 alleles/locus, which is lower than the findings obtained from some Chinese wild grape accessions (Liu et al., 2012a) but is in accordance with the results of the Huangshan region accessions (Zhang et al., 2012). This indicated a lower level of genetic differentiation among V. davidii accessions. 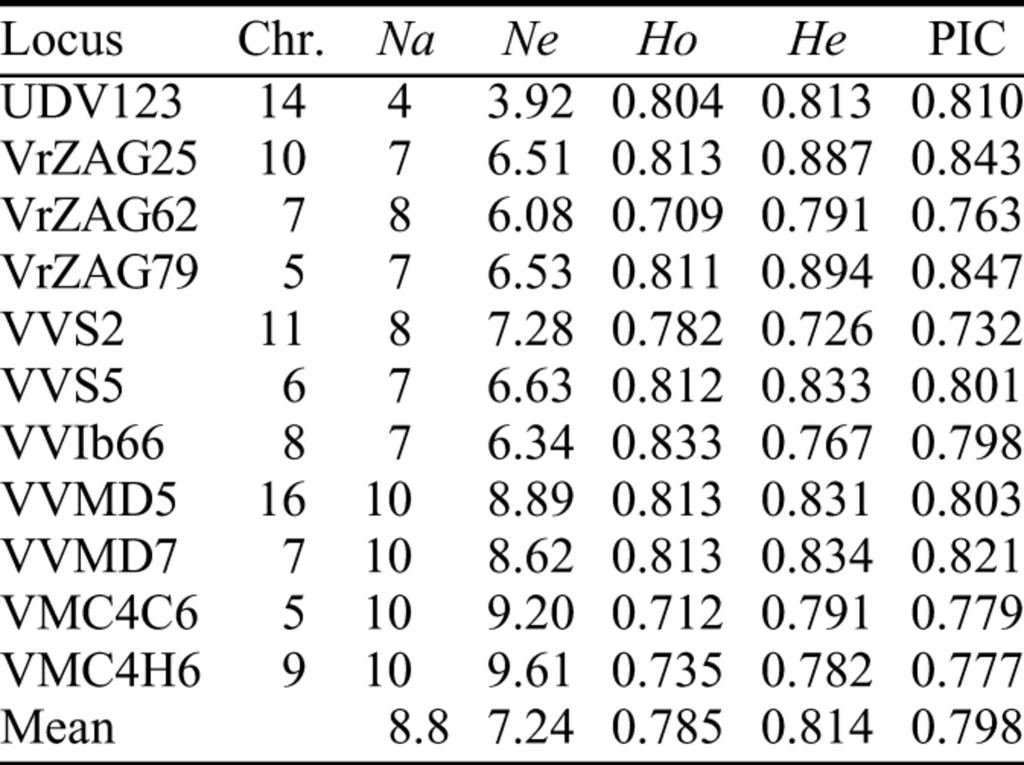 In this study, the percentage of heterozygotes of the 11 loci was high, indicating the high variability present in the samples. The He values ranged from 0.726 at locus VVS2 to 0.894 at locus VrZAG79, the average value of the He is 0.814, which was lower than that reported by Li et al. (2017) (0.839) among Chinese grape landraces. The values of Ho for individual loci ranged from 0.709 at locus VrZAG62 to 0.833 at locus VVIb66, with a mean of 0.785 (Table 2). The mean He was slightly higher than the Ho. This difference could be explained by the lack of human selection, which reduced homozygosity in grape plants (Sefc et al., 2001).

Twelve pairs of SRAP primer combinations were selected for their ability to produce clear and repeated polymorphic and unambiguous bands among the varieties (Table 3). As the data in Table 3 indicate, a total of 188 bands were obtained using the 12 primers. Of the 188 bands, 158 were highly polymorphic (84.0% polymorphic) and ranged from 50 to 1500 bp. The number of amplicons scored per primer combination ranged from 7 (Me13/Em7) to 24 (Me9/Em7), and the average was 15.7 bands per primer combination. Of these bands, 66.7% (Me6/Em7) to 100% (Me5/Em7) were polymorphic among the 48 accessions, and the average of the percentage of polymorphic bands was 84.0%, which is higher than that of the cultivated varieties and wild Vitis species (Guo et al., 2012), but less than that among Chinese wild Vitis species (Liu et al., 2012a). The PIC values for the 12 primer combinations ranged from 0.67 (Me6/Em7) to 0.83 (Me8/Em13) and had a mean of 0.76 (Table 3). Seven of the 12 markers were highly polymorphic and had a PIC value equal to or greater than 0.75. The PIC results for each marker confirmed its ability to show differences between the samples analyzed in this study.

Details of sequence-related amplified polymorphism primers in this study. 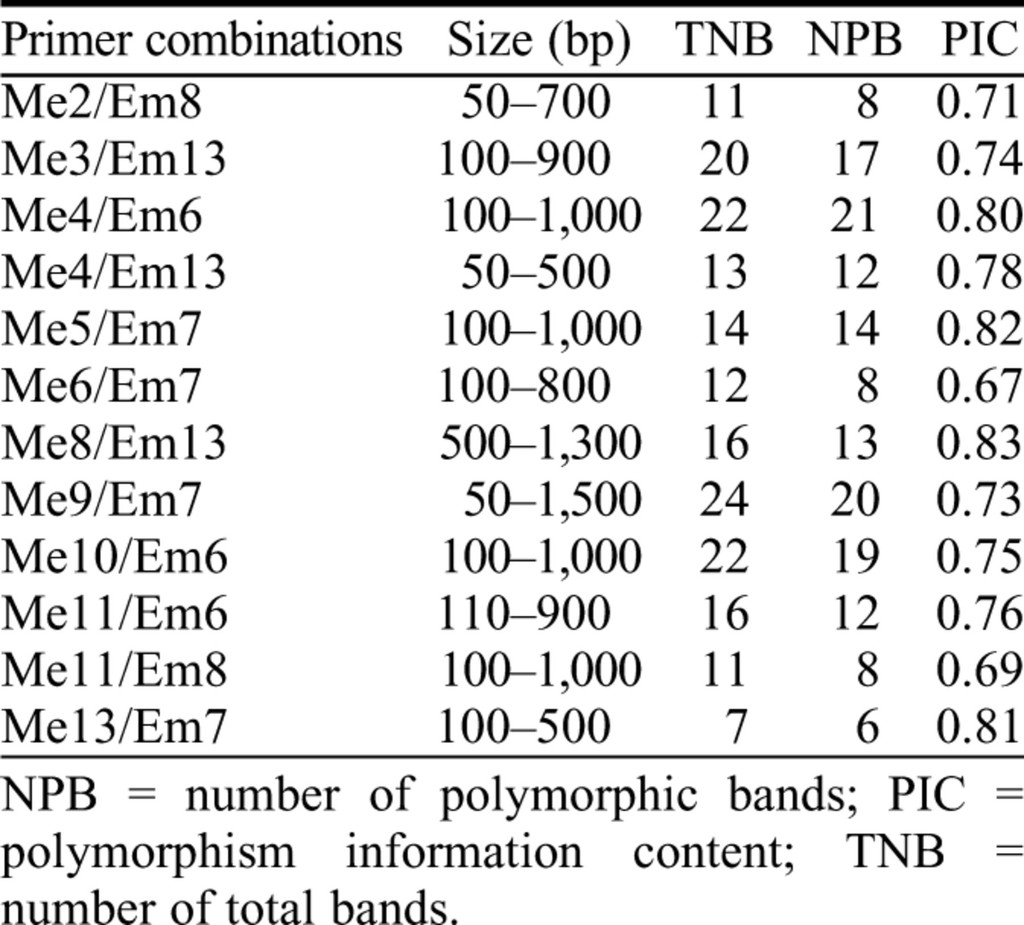 The genetic similarity data obtained from the SSRs and SRAPs were used for cluster analysis. The dendrograms showing the relationships among 48 V. davidii accessions based on the SSR and SRAP data are shown in Figs. 1 and 2, respectively.

The dendrogram obtained from the SSR analysis is shown in Fig. 1. Genetic similarities coefficient among all accessions ranged from 0.63 to 0.99, with a mean similarity of 0.81. The SSR markers used revealed lower genetic distances between most accessions, indicating that the genetic variation was small and the genetic differentiation was low among the V. davidii accessions, which is in accordance with the results of V. ficifolia accessions (Wang et al., 2008).

The present study highlights the usage of SSR and SRAP techniques for studying genetic diversity at the DNA level in 48 wild V. davidii accessions to investigate genetic polymorphisms and relationships among accessions. The results showed that, the number of loci that present allelic variation and the genetic diversity coefficients labeled by SSRs and SRAPs both revealed the abundant genetic diversity of wild V. davidii accessions. The SSR analysis results showed almost accessions from same geographical regions or the surrounding area grouped together, and we speculated on the origin of Ciputao 0941♀, Ciputao 0940♂, and Fu’an-ci-01 using SSR markers. Both SSR and SRAP markers can be used to identify homonyms. The result will be valuable for further management and protection of wild V. davidii germplasm resources.

Dendrogram of genetic relationships of the Vitis davidii accessions based on simple sequence repeat analysis.

Dendrogram of genetic relationships of the Vitis davidii accessions based on sequence-related amplified polymorphism analysis. 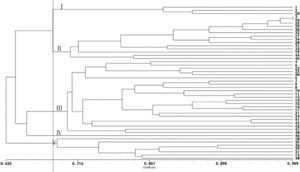 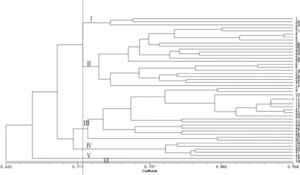