A grapevine is generally characterized as a woody vine. However, within the North Dakota State University Grape Germplasm Enhancement Project, a novel determinate natural mutant, with natural self-limited growth and reproductive habit, was discovered and designated Vitis NDMutant1. The genotype resulted from self-pollination of a vine designated Vitis ND 733 (unreleased). The resulting genotype displays a determinate, shrub-like growth and reproductive habit with continuous flowering capabilities. The plant has been successfully propagated through green shoot tip cuttings as well as budding, giving rise to propagules having the same unique growth habit and demonstrating the stability of the phenotype. Attempts to germinate seed were unsuccessful due to poor embryo development, thus the vine is considered at least semiseedless. However, the genotype has proven to be male fertile. The properties of the genotype may have value in foundational research in reproductive expression and development as well as in the genetics and physiology differentiating determinate shrubs and indeterminate vines to complement ongoing research in annual plants. Utility may also be found to complement ongoing research in woody plant juvenility and winter dormancy. Additionally, the vine may have use in applied breeding of seedless and cold-hardy wine and table grapes. Such a vine could provide a useful model system and warrants conservation and further investigation.

The genotype resulted from the self-pollination of a hybrid grapevine (Vitis spp.) designated ND 733 (unreleased) within the North Dakota State University Grape Germplasm Enhancement Program. Accession ND 733 is a vine produced by the controlled hybridization of ‘Valiant’ (a complex hybrid including Vitis vinifera, Vitis labrusca, and Vitis riparia) with ‘Madeleine Angevine’ (V. vinifera). The initial hybridization was conducted to create low acid, early maturing white wine parental types for future breeding efforts for North Dakota. Accession ND 733 was further investigated because of its unique low initial total titratable acidity at veraison. With the intention of further improvement, ND 733 was self-pollinated to create an S1 population. Within, the resulting S1 population a single shrub-like genotype was discovered that displayed determinate growth. This vine’s form was thought to be the result of a natural mutation; thus it was given the designation NDMutant1 (Fig. 1).

The growth form of the discovered plant is denoted by determinant reproductive and vegetative growth not typical to hybrid grapevine (Fig. 2). The plant’s shoots initiate normal vine growth through juvenility with nodes containing phenotypically normal and true-to-type leaves, axillary buds, and dormant resting buds. After producing several (≈4) phenotypically normal nodes, the vine produces altered nodes containing only leaves, tendrils, and reproductive structures and having no resting or axillary buds (Fig. 3). When altered nodes are formed, their reproductive structures are atypical with individual or grouped singly borne flowers produced in place of lateral and resting buds. This is in contrast to the panicle-type altered tendrils typically seen in Vitis. Last, stem growth ceases through conversion of the shoot tip to a tendril, inflorescence-like structure, giving the vine its unique determinate growth and reproductive habit. The plant creates several resting buds at the base of each new stem. These buds break over time, allowing for continuous growth under adequate heat and photoperiod. In addition to the defined growth pattern, the vine’s leaves are thick in nature and triangular to ovate in shape, and the plant produces extensive aerial roots along its trunk and lower stems.

Stem measurement comparisons with an S1 sibling showed differences in plant growth characteristics (Table 1). Data were taken on five subsampled stems of three replicates, clonally propagated plants of each genotype. Data were subjected to analysis of variance using the mixed procedure of SAS statistical software (SAS Institute Inc., Cary, NC) as a completely random design with stems treated as random subsamples and genotypes treated as fixed effects. Covariance parameters were estimated using the restricted maximum likelihood method; where sample error did not differ from experimental error, errors were allowed to be pooled. After the confirmation of significant variance (α = 0.05), mean separation was conducted using pairwise t tests. Plants were measured for internode length (cm), number of nodes at which the meristem was lost (meaning its conversion to a tendril like structure with growth cessation), number of altered nodes (those having no buds with singly borne flowers), number of singly borne flowers per stem, and number of singly borne flowers per altered node. Through these observations, NDMutant1 consistently had shorter internodes before bud morphogenesis to singly borne flowers. Typically, the apical meristem of NDMutant1 vines was lost at around the seventh node, whereas its S1 sibling never lost its apical meristem and continued to grow. The NDMutant1 genotype also had ≈2.5 altered nodes form per stem, giving rise to ≈4.4 singly borne flowers, whereas no such altered nodes occurred in the S1 sibling vines.

Growth and reproductive characteristics of NDMutant1 and an S1 sibling.

Given growth favorable conditions (warm temperature and long-days), the plant grows as a small shrub with periodic dormant budbreak, new shoot growth, flowering and fruiting, and growth cessation. Under these conditions, the plant needs no vernalization to maintain growth. This unique growth pattern enables the plant to show all reproductive stages simultaneously from flowering to mature fruit, similar to the vine Vitis ‘Pixie’ derived from the L1 layer from the L1/L2 periclinal chimera Vitis ‘Pinot Meunier’ (Boss and Thomas, 2002; Cousins and Tricoli, 2006). Although these vines both continuously flower, the mechanism for their respective habits is likely to differ as they have markedly different growth forms. It is speculated that the current genotype’s form is related to the FLOWERING LOCUS T gene or related genes as the phenotype is similar to that described in controlled transformations of Malus, Prunus, and Populus (Böhlenius et al., 2006; Hsu et al., 2011; Srinivasan et al., 2012; Wenzel et al., 2013; Zhang et al., 2010). Homologs of similar genes have been identified in Vitis and should be investigated (Carmona et al., 2007).

The original vine was vernalized to evaluate its resting buds’ ability to break dormancy and grow after a simulated winter. After placement in 3 °C refrigeration for 45 d, resting buds broke dormancy normally on return to greenhouse conditions. The shoots arising from overwintered buds appeared normal in their growth including the creation of typical wild-type grapevine inflorescences. The initial nodes along the stem developed as wild-type whereas later developing nodes along shoots again were altered to enact a determinate growth habit.

To determine the stability of the phenotype, the plant was asexually propagated using green shoot-tip cuttings. Cuttings rooted readily when treated with 0.01% IBA, mist, and bottom heat in 100% perlite media. Outgrowth was limited as many buds reverted to reproductive structures; however, this was overcome by taking cuttings early in development to ensure the presence of vegetative buds that had not reached dormancy. Through visual inspection, all propagules (n = 14) maintained the same growth habit as the mother plant. In addition, wild-type basal buds of NDMutant1 were top budded to interspecific hybrid seedling rootstock. Budded plants did not revert to a wild-type Vitis vining habit and vegetative buds continued to be altered to reproductive structures, again confirming the phenotypic stability of the trait and dismissing a root related causation.

To test progeny viability, open-pollinated mature fruit was harvested. The resulting seeds were found to be underdeveloped and nonviable. Through several fruiting cycles, the mother plant and all propagules produced only seed remnants and no fully developed seed. Genetic seedlessness cannot be dismissed as the seedless characteristic is found within the background of one parental type ‘Valiant’. ‘Valiant’ was derived from Vitis ‘Fredonia’ pollinated with a V. riparia selection from Montana (Hemstad, 2015). ‘Fredonia’ has been shown to be a recessive seedless donor as it was the seed parent of the seedless grapes Vitis ‘Einset Seedless’ and Vitis ‘Suffolk Red’. Although fruit were characterized as seedless, pollen collected from NDMutant1 has been found to be viable through controlled crosses and has produced progeny when placed on pistillate and emasculated perfect flowered vines. Through the F1 generation of such crosses, no progeny has exhibited a similar growth pattern.

The genotype may be useful in reducing generation time in grapevine breeding as a result of its early, continuous flowering nature if its inheritance can be confirmed. However, the greatest utility may come from its importance as a model organism for investigations into the physiology of reproductive expression as a complement to the ongoing efforts in annual species. In addition, the genotype may have utility in defining the basis for vining habit in woody plant systems and complement ongoing woody plant research in flowering expression, juvenility, and dormancy.

A small number of cuttings may be obtained by interested research personnel through Harlene Hatterman-Valenti (E-mail: h.hatterman.valenti@ndsu.edu) of the Plant Science Department at North Dakota State University for research purposes. It is requested that recognition be made in the case NDMutant1 contributes to published research or in the development of new germplasm or cultivars. 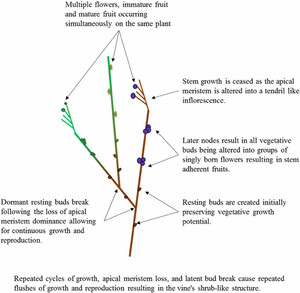 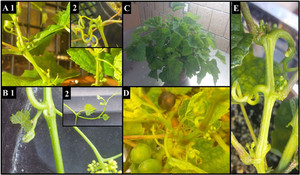