The Agricultural Research Service, United States Department of Agriculture, and the University of California, Davis, announce the release of three F2:4 breeding populations of iceberg lettuce (Lactuca sativa L.). The breeding populations, designated RH14-1156, RH14-1157, and RH14-1158, are the first to combine resistance to the soilborne diseases corky root and verticillium wilt race 1. The populations are genetically fixed for disease resistance, and all progeny descending from these populations are expected to be resistant. These populations should be used to select inbred iceberg lettuce cultivars adapted to environments where corky root and verticillium wilt race 1 are prevalent and damaging.

Selection for resistance to soilborne root diseases can be difficult and labor intensive. Molecular markers can be used, but are not always cost effective or available for smaller lettuce breeding programs. An alternative is for public breeding programs to develop germplasm genetically uniform for disease resistance, but genetically variable for horticultural, agronomic, and quality traits (Hayes et al., 2014). External breeding programs could then select within these populations to develop new and unique cultivars without the need to evaluate for disease resistance. Here, we report the development and release of three early generation iceberg breeding populations that are the first to combine resistances to verticillium wilt and corky root.

The F2:4 (F2 derived F4) breeding populations are derived from a cross between the breeding line RH09-0689 and ‘Telluride’. The full pedigree of these breeding lines is shown in Fig. 1. ‘Telluride’ is a commercially available (Plant Variety Protection certificate number 200300168) iceberg cultivar developed by the seed company Enza Zaden with the cor gene. ‘Telluride’ is cataloged as PI 632993 in the National Plant Germplasm System (https://npgsweb.ars-grin.gov/gringlobal/accessiondetail.aspx?id=1644842). The United States Department of Agriculture (USDA) F3:4 iceberg breeding line RH09-0689 was the source of Vr1, which was originally introgressed from ‘La Brillante’. In addition to ‘La Brillante’, RH09-0689 has the USDA cultivars Tiber and Pacific in its pedigree. ‘Tiber’ and ‘Pacific’ are both susceptible to corky root and verticillium wilt. A descendant from RH09-0689 was released in 2015 as RH12-3195, and is available at the National Plant Germplasm System as PI 673091 (https://npgsweb.ars-grin.gov/gringlobal/accessiondetail.aspx?id=1921390). The sibling line RH12-3197 was used as a control in several experiments during field-testing of these populations. Other control cultivars used in field experiments include the iceberg ‘Salinas’, which is susceptible to verticillium wilt and corky root, and iceberg cultivars with the cor gene including ‘Durango’, ‘Hallmark’, ‘Glacier’, ‘Quest MT’, and ‘Sniper’.

Lettuce is a naturally self-pollinating species that does not suffer from inbreeding depression, and a combination of the pedigree and bulk breeding methods were used to develop RH14-1156, RH14-1157, and RH14-1158. Forty-five F2:3 families were developed by growing F2 plants in a nondisease-infested field site in Salinas, CA, selecting plants for iceberg type horticultural characters and allowing the selected plants to flower and self-pollinate. The resulting F2:3 families were evaluated in a May-planted field experiment conducted in a USDA, Salinas field site, artificially infested with V. dahliae race 1 isolate VdLs16. This field site is also naturally infested with corky root. Each family was replicated three times and planted with the checks RH12-3195, ‘Telluride’, and ‘Durango’. In mid-July, plants were visually evaluated for foliar wilting typical of verticillium wilt. Thirty-four families were identified as verticillium wilt–susceptible or likely segregating for resistance and were discarded. All plants (≈90) of the eleven remaining families and checks were uprooted, split longitudinally, and evaluated for internal root discoloration typical of verticillium wilt, using the method of Hayes et al. (2011). A preliminary assessment of corky root resistance was also conducted by recording the family numbers of families that had a low incidence of plants with severely symptomatic roots. Internal root discoloration in these families ranged from 0% to 6% and was 1% in RH12-3195. ‘Telluride’ and ‘Durango’ had 65% and 56% incidence of root discoloration, respectively. Families segregating for Vr1 would be expected to have a disease incidence of 25%, although this could be lower because of the occurrence of disease escapes. Vascular discoloration in 6% or less of tested plants indicates that the eleven families are genetically uniform for verticillium wilt resistance. Preliminary assessment of corky root resistance identified three of the eleven families with resistance as good as or better than ‘Telluride’ and ‘Durango’. RH12-3195 was highly susceptible to corky root.

The following season, the three selected F2:3 families combining verticillium wilt and corky root resistance were evaluated in the same field site. Three replications were used for each entry in a randomized complete block design (RCBD) and included ‘Telluride’, RH12-3197, ‘Quest MT’, and ‘Salinas’. The experiment was planted in April and evaluated in June. All plants (≈90 per entry) were evaluated for verticillium wilt disease incidence and corky root severity using a 0 to 9 scale reported in Brown and Michelmore (1988). Verticillium wilt disease incidence in ‘Salinas’, ‘Quest MT’, and ‘Telluride’ ranged from 88% to 90%. RH12-3197 and the F2:3 families had <3% symptomatic plants, which was significantly lower (P < 0.01) than the control cultivars. ‘Salinas’ and RH12-3197 had corky root severity means greater than 7.8, which was significantly higher than ‘Quest MT’ (corky severity mean = 6.2) and ‘Telluride’ (corky severity mean = 6.4). The three F2:3 families had corky root severity means less than 5.9. This was significantly lower than all other entries, with the exception that ‘Quest MT’ was not significantly different from one F2:3 family. More than 90 plants from each of the three F2:3 families were greenhouse grown and allowed to self-pollinate. Seeds from each plant were massed to create three F2:4 families designated RH14-1156, RH14-1157, and RH14-1158.

RH14-1156, RH14-1157, and RH14-1158 were planted in three field experiments. These included two USDA, Salinas sites that were naturally infested with corky root (SP15-4 and FA15-1) and the third, a grower-cooperator site near Salinas, CA (experiment VT15-3, Table 1), that was reportedly infested with verticillium wilt (Table 1). However, neither verticillium wilt nor corky root disease occurred in VT15-3 and no disease data were collected. All experiments were an RCBD with three replications and included the parents and control cultivars Glacier, Hallmark, Sniper, Telluride, and RH12-3197. Planting dates were June, July, and August, resulting in evaluations in August, September, and October. More than 20 heads from each plot were individually assessed for corky root severity, head firmness, head weight, head diameter, head height, core height, and the occurrence of the physiological defect, tipburn in FA15-1 and VT15-3. Only corky root resistance and core height were measured in SP15-4. Data were analyzed using Proc Mixed in SAS (Version 9.2; SAS Institute, Inc., Cary, NC). Tipburn occurrence was used to calculate the percentage of plants with tipburn in each plot, which was square root then arcsin transformed before analysis. Downy mildew (incited by Bremia lactucae) naturally occurred in FA15-1 and disease severity was evaluated using the method of Simko et al. (2013). Within line (plant-to-plant) variances were calculated for all traits except tipburn for each breeding population, breeding line, or cultivar. The variances for the breeding lines and cultivars were further pooled into a single variance estimate. Because cultivars and breeding lines are inbred and homozygous, the pooled variance is an estimate of environmental variation. An F-test between the breeding population and environmental variances was conducted to test for plant-to-plant genetic variation within a breeding population.

Description, Use, and Availability

Breeding populations RH14-1156, RH14-1157, and RH14-1158 are iceberg germplasm that is genetically uniform for resistance to corky root and verticillium wilt. Horticultural characters of these populations are generally similar to modern iceberg cultivars. In limited testing, RH14-1157 appeared to have an improved combination of higher head weight and shorter cores compared with the cultivars tested in these experiments. RH14-1158 contains genotypes that are susceptible to premature bolting.

This germplasm is being released as F2:4 populations. Randomly selected F2 plants are expected to be heterozygous for 50% of the loci where the parents have different alleles. Seed increase without selection will maintain this variation, although the frequency of homozygous loci in individual plants will increase after self-pollination. Although these populations were selected for horticultural characters in the F2 generation and for resistance in subsequent generations, it is likely that these populations have sufficient genetic variation to enable further performance improvements or development of unique inbred lines. Lettuce breeders should use these populations to select plants and eventual inbred lines for adaptation to environments where corky root and verticillium wilt are prevalent problems. The resulting inbred lines selected from these populations are expected to be resistant to both diseases.

Limited seed samples of these breeding populations are available for distribution to all interested parties for research purposes. RH14-1156, RH14-1157, and RH14-1158 are being publically released with no intellectual property protection for the development and commercialization of new cultivars by seed companies, universities, nongovernmental organizations, or other bona fide private or public research organizations. It is requested that appropriate recognition be made if these populations contribute to research or the development of new germplasm, breeding lines, or cultivars. Written requests for seed can be sent to Ivan Simko, USDA-ARS, 1636 E. Alisal St., Salinas, CA 93905 or sent through e-mail (ivan.simko@ars.usda.gov). 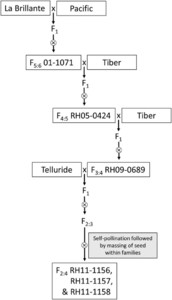