‘Cebasred’ and ‘Primorosa’ are very early-season ripening apricot cultivars (Prunus armeniaca L.) which join high productivity, high fruit quality and attractiveness, with resistance to Plum pox virus (PPV), a valuable characteristic due to the growing incidence of sharka disease caused by this virus in the European apricot orchards (Rubio et al., 2017). In addition, ‘Cebasred’ and ‘Primorosa’ are self-compatible cultivars. ‘Cebasred’ and ‘Primorosa’ combine all the above mentioned characteristics with very low chilling requirements, which also let them to be cultivated in warm areas. These new varieties will contribute to broaden the ripening calendar with highly valuable sharka resistant germplasm also ready to be used in future breeding processes for low chilling warmer areas.

Trees are vigorous with medium-upright habit for ‘Cebasred’ and moderately spreading habit for ‘Primorosa’ trees. This tree architecture greatly facilitates pruning (reduced branching habit). ‘Cebasred’ and ‘Primorosa’ have a high and medium flower density, respectively. Both cultivars are characterized by their high productivity level in comparison with some traditional Spanish cultivars. Fruit production in ‘Cebasred’ occurs mainly on fruiting spurs of 2-year-old branches, whereas in ‘Primorosa’ the fruit production is located both in spurs of 2-year-old branches and brindles. They have a moderate need for thinning to obtain good fruit sizes (Table 1).

Description of tree and fruit traits of ‘Cebasred’ and ‘Primorosa’, the traditional Spanish cultivars Currot and Búlida, and the North American cultivar Orange Red under experimental conditions in Cieza (Murcia, Southeast Spain).

All apricot cultivars traditionally grown in Europe are susceptible to sharka disease caused by PPV, whereas several cultivars from North America such as ‘Goldrich’, ‘Sunglo’, ‘Orange Red’, and ‘Stark Early Orange’ showed resistance to PPV (Martínez-Gómez et al., 2000) and are frequently used as parents in breeding programs (Egea et al., 1999). In the case of ‘Cebasred’ and ‘Primorosa’, the CEBAS-CSIC apricot breeding line ‘701-1’ and ‘Rojo Pasión’ cultivar were used, respectively, as parents to obtain PPV resistance (Fig. 1). The evaluation of PPV resistance was carried out in greenhouse conditions by grafting onto PPV-infected ‘GF305’ peach seedlings growing in pots and by grafting onto infected 7-year-old apricot trees strongly affected by the disease growing in a quarantine shelter (Rubio et al., 2009). Phenotyping against PPV in both conditions showed the resistance of ‘Cebasred’ and ‘Primorosa’ to PPV Dideron-type isolate 3.30 RB/GF-IVIA (GenBank: KJ849228.1) (absence of symptoms and ELISA-DASI and RT-PCR negatives in leaves), in comparison with the susceptibility of the traditional Spanish cultivars (Table 1).

‘Cebasred’ and ‘Primorosa’ need ≈38 chill portions according to the Dynamic Model (Fishman et al., 1987a, 1987b) to break dormancy under our conditions in Murcia (southeast of Spain, lat. 37°N, long. 1°W, and 350-m altitude). Therefore, these new cultivars show very low chilling requirements (Ruiz et al., 2007). Full bloom for ‘Cebasred’ and ‘Primorosa’ occurs on average on 18 Feb. and 20 Feb. respectively, a very early flowering date similar to that of the traditional Spanish cultivar Currot (Table 1).

‘Cebasred’ and ‘Primorosa’ are self-compatible as demonstrated in the field (by bagging branches) and in the laboratory (by observing pollen tube growth in 10 flowers) according the methodology described by Burgos et al. (1993). In addition, the identification of their S genotypes by PCR using the consensus primers EM-PC2consFD and EM-PC3consRD (Sutherland et al., 2004) revealed that ‘Primorosa’ is homozygous for self-compatibility (ScSc), whereas ‘Cebasred’ is heterozygous for self-compatibility, showing the band corresponding to the Sc RNase allele and a band of 300 bp (agarose gel electrophoresis not shown).

The ripening date for ‘Primorosa’ in our experimental conditions in Murcia (southeast of Spain, lat. 37°N, long. 1°W, and 350-m altitude) is ≈6 May, similar to the earliest ripening traditional Spanish cultivar Currot and the very early ripening releases from CEBAS-CSIC ‘Mirlo Blanco’ and ‘Mirlo Anaranjado’ (Egea et al., 2010). The ripening date for ‘Cebasred’ is ≈30 Apr., around 7 d earlier than ‘Primorosa’ and Currot, ≈26 d earlier than the Spanish cultivar Búlida, and 28 d earlier than the North American cultivar Orange Red (Table 1). This means that ‘Cebasred’ is considered as an extra-early cultivar with the earliest date of ripening of all the apricot cultivars grown in Spain. Fruit of both cultivars ripen uniformly. At that time in the season, there is very limited competition with apricots produced from other European countries, mainly in the case of ‘Cebasred’.

‘Cebasred’ (left) and ‘Primorosa’ (right) fruits in the tree and after harvesting. 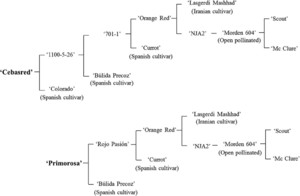 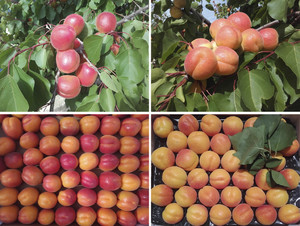