The effect of macronutrient omission on the growth and volatile chemical composition of Lippia gracilis was evaluated. The “minus one element” technique was employed by using a complete (Hoagland and Arnon, 1950) nutrient solution and solutions with macronutrient omission for N, P, K, Ca, Mg, and S. Macronutrient deficiency significantly influenced L. gracilis growth and volatile chemical composition. Leaf dry weight decreased in order of importance of the macronutrients as follows: Ca = K = N > P > Mg > S. The amount and composition of volatile compounds varied according to macronutrient omission. The major constituents were characterized by p-cymene (ranging from not detected to 43.41%), thymol (3.86% to 7.95%), carvacrol (44.09% to 76.69%), and caryophyllene (0.52% to 6.00%), the contents of which were dependent on the omitted macronutrient. Lack of Ca, Mg, and S increased the contents of cymene and decreased the thymol and carvacrol compared with control. Complete solution and N, P, and K omission retained the same thymol and carvacrol content. In summary, macronutrient availability effectively controlled plant growth and volatile chemical composition of L. gracilis.

Principal component analysis of the averages of major compounds of the essential oil of Lippia gracilis grown under macronutrients omission. 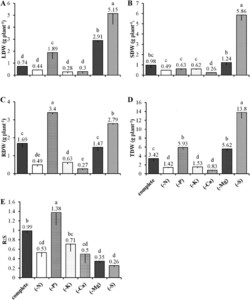 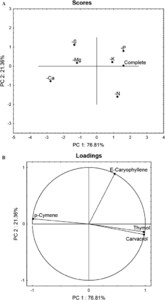