‘PP-1’ (PP27536) ornamental perennial Arachis was approved for release by the University of Georgia College of Agricultural and Environmental Sciences in 2012. We established ‘PP-1’ in a test at Tifton, GA, with five perennial peanut cultivars, Ecoturf and Arblick, Florigraze, and Arbrook from the University of Florida. Genotypes were evaluated for flower number, plant color, plant height, turf quality, percent groundcover, canopy density, pepper spot and leaf scorch [both caused by Leptosphaerulina crassiasca (Sechet) C.R. Jackson and D.K. Bell], leaf length, leaf width, leaf area, spring green-up, freeze damage, and Peanut stunt virus. ‘PP-1’ reaches a height of about 20 cm; produces dense, dark-green leaves; and produces an abundance of flowers. Wing petals are Yellow-Orange Group 14D, and standard petals transition from Orange Group 24C in the center to Yellow-Orange Group 14 toward the margins. Data for each variable were analyzed statistically by analyses of variance. Least significance differences at P ≤ 0.05 were used for mean separation.

‘PP-1’ is a vigorous Arachis glabrata Benth. clone (Supplemental Fig. 1) volunteering for more than 50 years on the University of Georgia, Tifton Campus, Tifton, GA, next to a field used during the 1940s to test perennial peanut introductions. It has developed (under no cultivation) a natural uniform stand 7 m wide between U.S. Route 41 (limited on the west side by Department of Transportation herbicides) and a University of Georgia field (limited on the east side by herbicides and cultivation) that is 123 m long. Pictures of ‘PP-1’ were sent to Dr. Charles Simpson (an expert on Arachis germplasm) at Texas A&M University to help with identification. He indicated that he received an introduction (labeled A42) from Dr. Ray Hammons in 1969 that appeared to have narrow leaves similar to ‘PP-1’. Dr. Simpson sent a sample of A42, which we included in a comparison test with ‘PP-1’. A42 has wider leaves (Table 1) and more leaf area per leaf (Table 2) than ‘PP-1’. Leaf lengths were similar for the two genotypes (Table 3). 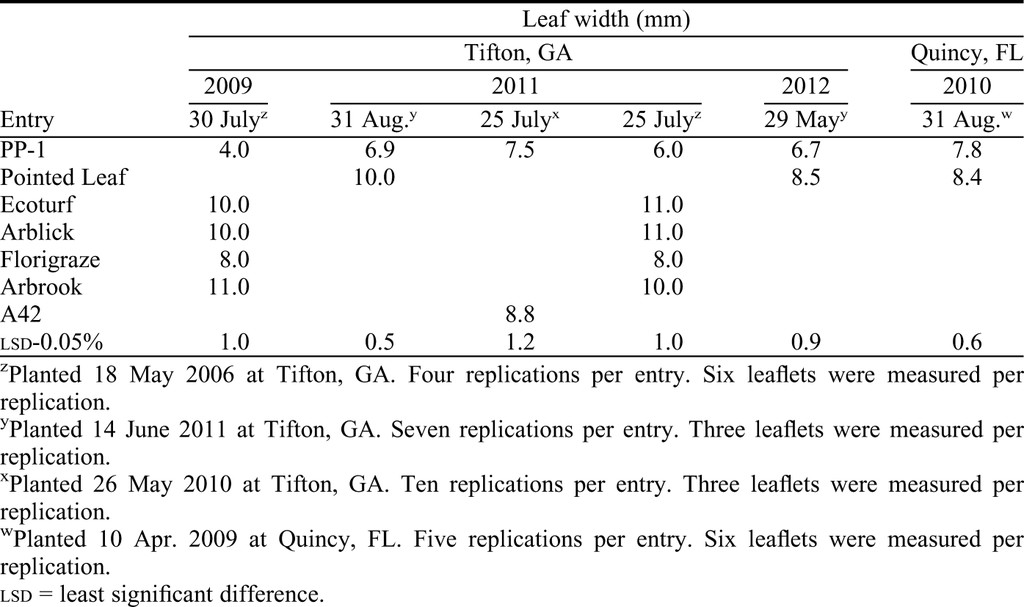 Leaf length on individual leaves of seven Arachis glabrata genotypes planted on 18 May 2006 and 2010 at Tifton, GA, and Quincy, FL. 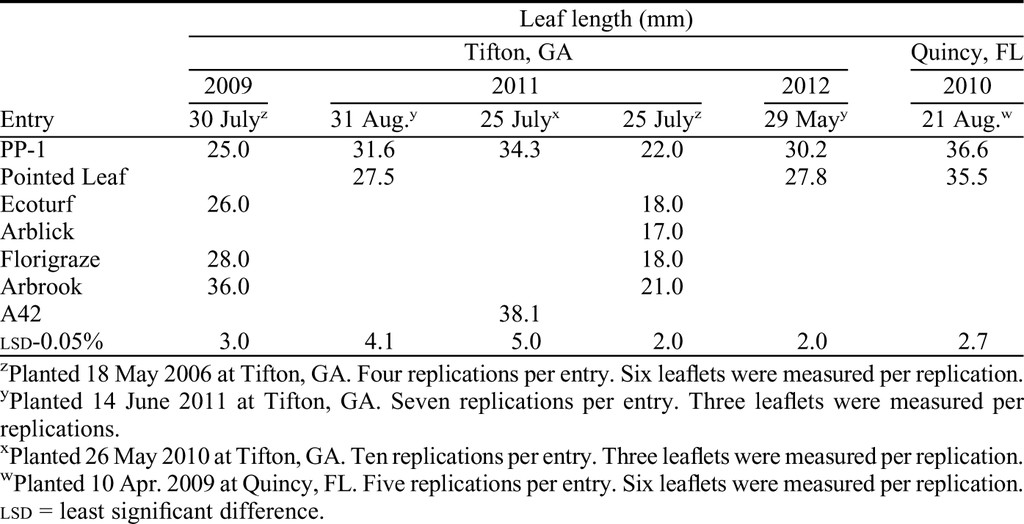 An amplified fragment length polymorphism study titled “Genetic Variability of Cultivated Rhizome Peanut” (Maas et al., 2010) showed ‘PP-1’ most related to ‘Florigraze’ (Prine et al., 1986), a broadleaf type. Morphologically, ‘PP-1’ is most similar to Natural Resources Conservation Service ‘Brooksville 68’ (Anonymous, 2006), commonly referred to as ‘Pointed Leaf’, for which planting stock was not available when we established the 2006 test at Tifton.

‘PP-1’ produces infrequent viable seed. Forty plants produced from seed of ‘PP-1’ showed a wide range of morphologic types, none with the vigor and persistence of ‘PP-1’ (data not reported). Therefore, vegetative propagation is the means for establishing this cultivar to maintain its purity. ‘PP-1’ probably arose from either an outcross or a superior genetic recombination from an Arachis glabrata Benth. introduction.

‘PP-1’ is a perennial, vegetatively propagated dark-green narrow-leaf perennial peanut recommended for use as an ornamental in U.S. Department of Agriculture zones 8b and 9. In 2006, ‘PP-1” was established in a test at Tifton, GA (3.7 × 3.7-m plots, four replications) with the released or soon-to-be released perennial peanut cultivars from University of Florida. Dr. Kevin Kenworthy provided us planting materials of ‘Ecoturf’, ‘Arblick’ (Prine et al., 2010), ‘Florigraze’, and ‘Arbrook’ (Prine et al., 1990). Tests (1.5 × 3.1-m plots) were established at Quincy, FL (five replications), and at Gainesville, FL (four replications), with the same cultivars plus ‘Pointed Leaf’ at Quincy, FL (10 Apr. 2009) and at Gainesville, FL (28 June 2010). Dr. Mimi Williams, breeder of ‘Pointed Leaf’, provided us planting material of this cultivar in 2010. Eight replications of ‘Pointed Leaf’ and ‘PP-1’ were established as single-plant propagules on 14 June 2011 at Tifton, GA. Each test was planted in a randomized complete block design. Plots at Tifton, GA, were established by planting 25 established plants on 0.61-m centers in the center of the plot. Plots at Quincy and Gainesville were established by planting eight established plants on 0.61-m centers within a 5.11-m2 plot. Plots at Tifton received 560 kg·ha−1 5N–4.3P–12.4K preplant and 280 kg·ha−1 5N–4.3P–12.4K yearly in April after establishment. Plots in Florida did not receive any fertilizer. Soil types for Tifton, Quincy, and Gainesville were Tifton loamy sand, Norfolk loamy fine sand, and Chipley sand, respectively.

‘PP-1’ was the top statistical group for flower number on 12 of the 13 rating dates during 2008 to 2011 at Tifton (Table 4); in four of five rating dates at Quincy, FL, in 2010 and 2011 (Table 5); and in two of five rating dates at Gainesville, FL, in 2011 and 2012 (data not reported). ‘PP-1’ had a significantly darker green color than the other cultivars at Tifton in 12 of 13 tests (Table 6). ‘PP-1’ was in the top statistical group for color at all rating dates in the Florida tests (data not reported). Mature leaf color was classified as Green 144A according to the Royal Horticultural Society color index, fifth edition (Royal Horticultural Society , 2007).

In the establishment year (2006) at Tifton, GA, ‘PP-1’ and ‘Ecoturf’ were slower to establish than the other cultivars (Table 10). Anderson et al. (2015) showed a similar slower rate of establishment for ‘PP-1’ (referred to as EX5 in the study). However, in subsequent years, ‘PP-1’ was in the top statistical group for maintaining dense groundcover. Canopy density at Tifton, GA (Table 11), was similar for ‘PP-1’, ‘Ecoturf’, and ‘Arblick’; and greater than ‘Florigraze’ and ‘Arbrook’ at most rating dates. Canopy density at Quincy, FL (data not reported), was similar to ‘Pointed Leaf’, ‘Arblick’, and ‘Florigraze’ at early and midseason dates, but had less density than the other cultivars except for ‘Pointed Leaf’ in October as a result of to pepper spot disease [Leptosphaerulina crassiasca (Sechet) C.R. Jackson and D.K. Bell].

Ratings for spring green-up and freeze damage on six Arachis glabrata perennial peanut genotypes planted at Gainesville, FL, on 28 June 2010 and at Quincy, FL, on 10 Apr. 2009.

A number of propagation studies (not reported here) have been conducted using rhizomes as sod (using a peanut inverter to dig the sod) and dug sprigs (using a traditional bermudagrass sprig harvester). Both propagation materials work well, but sprigs are easier to plant and handle. Best establishment takes place when sprigs are planted in furrows (continuous row of rhizomes with an average density of two to four sprigs side by side), covered with 2.5 cm of soil. Rhizomes planted in 1-m-wide rows establish in 1 year. Closer row spacings speed up establishment. A layer of rhizomes with 80% surface coverage planted in 23 × 46-cm flats or pots establish as a marketable product in 5 to 6 weeks in the greenhouse.

‘PP-1’ is a dark-green, narrow-leaf plant that produces an abundance of yellow-orange flowers in the spring, summer, and fall. It has performed as well or better in Georgia and Florida than most released cultivars. It has performed well in Poteet, TX, and Lake City, FL, in nonreplicated tests, and in yards at private residences where it has been established for 2 to 6 years. A study by Anderson et al. (2015) indicated that ‘PP-1’ did not perform well in their shade study. ‘PP-1’ produces a low-maintenance, low-input ornamental and colorful groundcover. General observations have been that PP-1 will not tolerate as much traffic as most grasses used for turf. Preliminary studies (not reported here) show that it can be used in combination with lawn grasses to furnish nitrogen for the grass. Although deer are located on the UGA Tifton Campus, we have never seen them grazing PP-1.

Three-year-old foundation field of ‘PP-1’ at the University of Georgia, Tifton Campus. 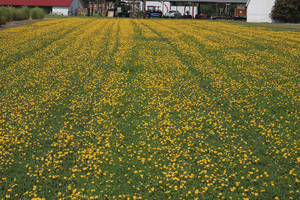