There are ≈20 million hectares of turfgrass managed in the United States, constituting the $40 billion turfgrass industry (National Turfgrass Federation, 2017). In most tropical and warm, temperate regions, bermudagrass (Cynodon spp.) is the foundation of the turfgrass industry (Taliaferro et al., 2004). Development of bermudagrass for turfgrass began in the early 1900s. Much of this development has involved the hybridization of Cynodon dactylon (L.), a tetraploid recognized as an invasive weed species in many regions, and C. transvaalensis (Burt-Davy), a more erect-growing diploid (de Wet and Harlan, 1970; Harlan and de Wet, 1969). Early turfgrass-breeding programs have aimed to develop better bermudagrasses to replace sand putting greens or seeded varieties (i.e., Burton, 1991). Today, the goal of many breeding programs is to create cultivars that are adapted to a broader range of environments and have improved drought tolerance. The latter is particularly important, as irrigation restrictions during drought events are becoming more common. Improved drought tolerance allows turfgrass to maintain growth and metabolic activities under water deficits through physiological processes, including osmotic adjustment, maintenance of root viability, and membrane stability (Huang et al., 2014; Nilsen and Orcutt, 1996).

DT-1, an interspecific triploid (2n = 3x = 27) hybrid of C. transvaalensis and C. dactylon, was tested in 19 drought-stress trials in Georgia, Florida, North Carolina, Oklahoma, and Texas before it was co-released from the University of Georgia and the U.S. Department of Agriculture–Agricultural Research Service in 2014 and commercially named ‘TifTuf’ (Hanna and Schwartz, 2016). Potential uses of DT-1 include sports turfgrass, home lawns, and golf course roughs, fairways, and tee boxes. DT-1 better withstands drought and traffic than previous commercial releases. In addition, it is generally faster growing than other bermudagrass cultivars and maintains turfgrass cover and green color longer into the fall. The objective of this manuscript is to summarize the performance, quality, and drought tolerance research leading to the release of DT-1.

In 1992, seven C. transvaalensis (T-572, T-573, T-573, T-574, T-575, T-576, and T-577) parents were crossed with four C. dactylon (T-90, T-110, ‘Quickstand’, and ‘VaMont’) parents in Tifton, GA. Cross-pollinations were made in the field by surrounding each C. transvaalensis parent with a C. dactylon parent in 1.9-m2 plots. All crossing blocks were in close proximity of each other, so intercrossing between and among plots cannot be ruled out. On 7 May 1993, more than 27,700 progeny from the cross combinations were planted on 46-cm centers in the field. Once established, plots were mowed three times per week at 6.4 mm. By the fall of 1994, 421 hybrids that maintained density under close mowing were selected, vegetatively propagated, and further evaluated in replicated tests until 1996. Ninety of these hybrids were selected based on turfgrass performance, vegetatively propagated, and planted on 30.5-cm centers under a rainout shelter in 1999 and evaluated until 2001 under deficit irrigation. At the conclusion of this trial, one genotype was selected and named DT-1 because it maintained quality and green color longer than the others when under drought stress.

DT-1 was further tested in 19 drought-stress trials, two traffic-stress trials, and four irrigated, nonstress trials. These replicated field tests were carried out in Georgia, Florida, North Carolina, Oklahoma, and Texas. In addition, DT-1 was entered into the 2013 National Turfgrass Evaluation Program trials, where it was evaluated in 20 more locations across the United States.

Inflorescence and vegetative plant morphology of five bermudagrass genotypes measured during 2011 and 2012 in Tifton, GA.z

The genetic turfgrass color of DT-1 rated lower than observed in all other tested cultivars based on visual ratings in an irrigated field trial in Tifton, GA, during 2011 and 2012 (Table 2). Digital image analysis (Karcher and Richardson, 2003; Richardson et al., 2001) performed on an irrigated, nonstressed field trial in Tifton, GA, during 2012 and 2013 revealed that DT-1 generally had a lower dark green color index value than other cultivars under evaluation throughout the growing season (Table 3). DT-1 was similar in color to ‘TifSport’ at establishment but lighter green than ‘Celebration’ or ‘TifGrand’ (Table 3). Although DT-1 was the lightest green cultivar at spring green-up, it was similar to ‘TifSport’ during the summer period (Table 3). When color was measured during fall dormancy, the color measured in DT-1 was less than ‘Celebration’ but similar to ‘TifGrand’ and ‘TifSport’ (Table 3).

Mean genetic turfgrass color of six bermudagrasses averaged over control and trinexapac-ethyl (TE)z treatments mowed at 2.54 cm in an irrigated field trial during 2011 and 2012 in Tifton, GA.y 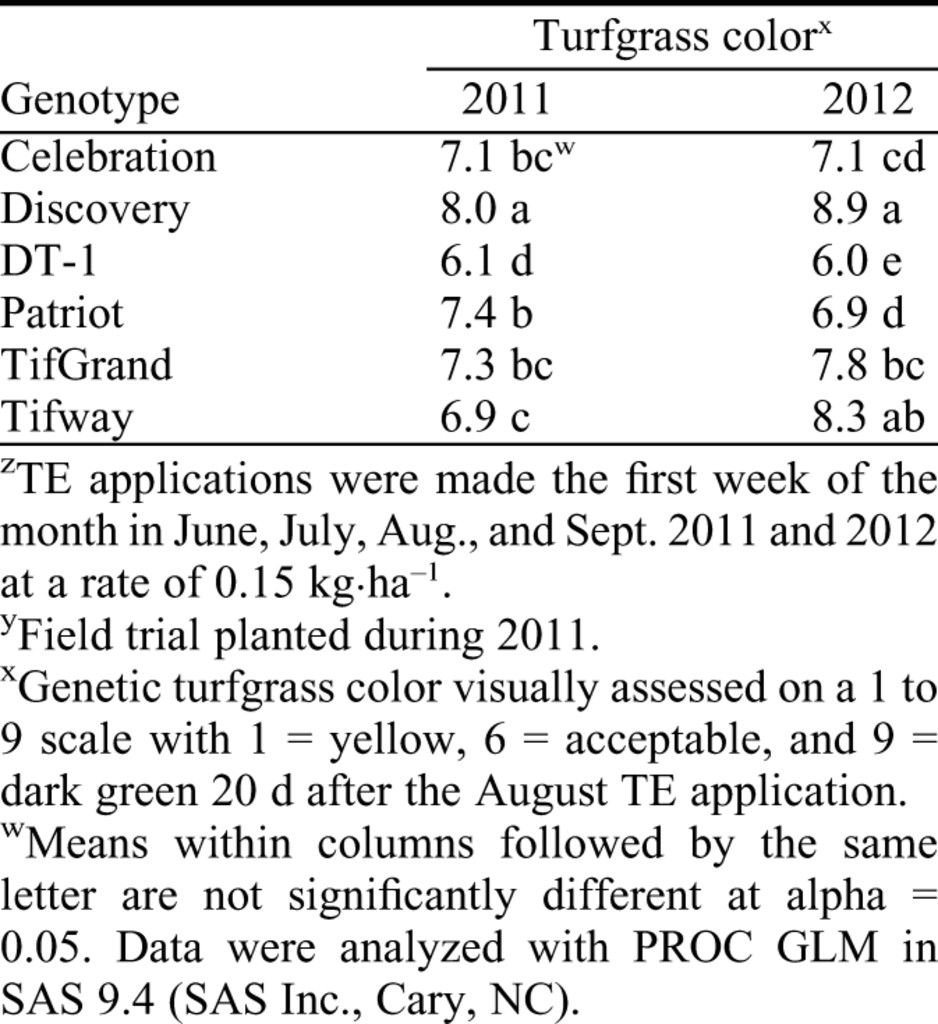 Mean turfgrass cover and color of five bermudagrasses mowed at 3.8 cm in an irrigated, nonstressed field trial during 2012 and 2013 in Tifton, GA.z

In nonirrigated stress trials conducted in Tifton, GA, from 2009 to 2011, DT-1 generally maintained greater turfgrass quality and green cover than ‘TifSport’ and ‘Tifway’ from spring green-up to fall dormancy (Table 4). The one exception was during periods of summer with sufficient rainfall to mitigate the stressed environment; here, ‘TifSport’ maintained similar coverage to the otherwise-superior DT-1. Percent green cover and cumulative water use were evaluated under drought conditions in a field trial conducted in Griffin, GA, in 2011 (Fig. 1; PR2 Profile Probe, Delta-T Devices Ltd., Cambridge, United Kingdom). A significant difference in turfgrass cover was observed between ‘Tifway’ and DT-1 after just 3 d of drought conditions (Fig. 1A; P > 0.05). Soil moisture was greater in DT-1 plots once the drought exceeded 7 d (Fig. 1B; P > 0.10). The mechanism of DT-1’s drought tolerance appears to be reduced water use. These data suggest that under prolonged drought events (those exceeding 7 d), DT-1 can maintain greater green cover with less irrigation.

Mean turfgrass quality and cover of three bermudagrasses mowed at 3.8 cm in a nonirrigated field trial during 2009, 2010, and 2011 in Tifton, GA.z

The visual quality of DT-1 compared with three other bermudagrass varieties was evaluated in 2013 and 2014 in five locations throughout the southern and transition zones of the United States (College Station, TX; Dallas, TX; Gainesville, FL; Raleigh, NC; Stillwater, OK; Table 5). There were no significant interactions among locations or years in nonstressed environments (P > 0.15), so data were further combined across locations for this particular analysis. DT-1 had greater quality in nonstressed environments than ‘Latitude 36’ and ‘Celebration’ and was similar to ‘Tifway’ (Table 5; P < 0.01).

Mean turfgrass qualityz of four bermudagrasses mowed at 2.4 to 3.8 cm in nonirrigated field trials during 2013 and 2014 in five locations.y Data were collected during periods of sufficient rainfall and drought stress. Nonstressed data are averaged overall five locations and both years. Drought-stressed data are averaged over both years within each location.

DT-1 had superior traffic tolerance to ‘Celebration’, ‘TifGrand’, and ‘Tifway’ when subjected to more than 6 weeks of traffic in Tifton, GA during 2012 and 2013 (weeks indicated by stars in Fig. 2; P < 0.05; Kowalewski et al., 2013). The mechanism of DT-1’s wear traffic tolerance may be its increased canopy density, particularly in the fall months, as illustrated by the percent green plot coverages that were estimated by digital image analysis in the untrafficked treatment of Fig. 2 (P < 0.05; also Table 4). The faster growth rate described in Tables 3 and 4 likely contributed to the resilience of DT-1 as well.

DT-1 does not produce seed or pollen, so it must be vegetatively propagated by sprigs, plugs, or sod. A potential limitation of DT-1 is that it can scalp when mowing frequency is not regular in environments in which soil water and nutrient availability are not limiting (Table 1). The potential of DT-1 to scalp has not been an issue in stress environments. Potential users of DT-1 bermudagrass would be the sod industry, sports turfgrass managers, landscape professionals, homeowners, and golf course superintendents maintaining turf at or above 1.27 cm (e.g., roughs, fairways, and tee boxes but not putting greens). DT-1 was thoroughly tested in the United States and should be widely adapted between the latitudes of 36 N and 36 S.

DT-1 is protected by U.S. Patent No. PP27,392 and has been submitted to the USDA-ARS Plant Genetic Resources Conservation Unit in Griffin, GA, where it is cataloged as PI 677384. DT-1 breeder planting material is maintained in the breeder nursery at the University of Georgia Tifton Campus. Because DT-1 is a patented cultivar, it may only be produced by licensed growers under guidelines established by the University of Georgia Research Foundation in conjunction with Georgia Seed Development. Contact Georgia Seed Development (http://www.gsdc.com) for information on availability.

Mean percent green cover determined by digital image analysis (A) and cumulative water use using 40-cm soil moisture profile probes (B) of two bermudagrasses mowed at 5.1 cm over 21 d without irrigation in a 2011 field trial in Griffin, GA. Mean turfgrass cover is significantly different where asterisks are present along the x-axes [**P value < 0.05; *P value < 0.10; data were analyzed with PROC GLM in SAS 9.4 (SAS Inc., Cary, NC)]. Field trial was planted in 2010.

Mean percent green cover determined by digital image analysis of four bermudagrasses mowed at 2.54 cm over 10 weeks with and without simulated traffic in an irrigated field trial during Fall 2012 and 2013 in Tifton, GA. Significant differences among varieties were observed in weeks 3, 4, 8, 9, and 10 for the untrafficked control (A); and weeks 1, 2, 3, 4, 6, 7, 8, 9, and 10 under the traffic treatment (B) [alpha = 0.05; data were analyzed with PROC GLM in SAS 9.4 (SAS Inc., Cary, NC)]. Stars indicate that mean percent green cover of DT-1 is significantly greater than all other tested cultivars within respective traffic treatments. Field trial planted during 2011. 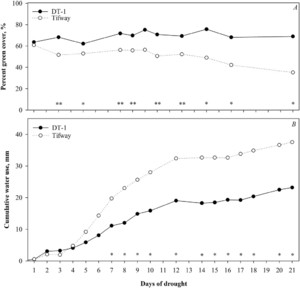 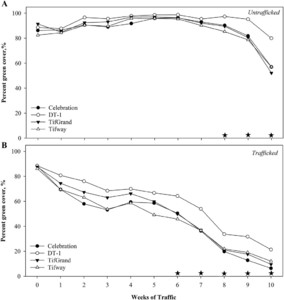