‘Weeping Dragon’ is a new ornamental citrus cultivar released 30 June 2016 (Bowman, 2016) by the Agricultural Research Service (ARS) of the U.S. Dept. of Agriculture. The major positive attributes of this unique ornamental citrus scion are the combination of strongly contorted and weeping growth traits in a moderately vigorous and healthy, very small orange-like tree, especially suited for use as an ornamental specimen in a pot or the ground. The cultivar can be easily propagated by grafting clean budwood onto a standard citrus rootstock cultivar.

Leaf and spine measurements were collected from 15 separate nodes on current-season hardened shoots on one mature tree for each of ‘Weeping Dragon’, ‘Flying Dragon’, ‘Cipo’, and ‘Carrizo’ citrange (Citrus sinensis × Poncirus trifoliata) in Sept. 2016. Fruit measurements were collected from 3 to 5 mature fruit from trees of the four cultivars in Sept. 2016.

Trees of ‘Weeping Dragon’ have trifoliolate leaves with articulated winged petioles, similar to leaves of other first generation hybrids between citrus and Poncirus trifoliata. The center leaflet, side leaflet, and petioles of ‘Weeping Dragon’ are significantly longer and wider than those plant parts on its parent ‘Flying Dragon’, as well as ‘Carrizo’, a hybrid of similar parentage (Table 1). The other parent, ‘Cipo’, has unifoliolate leaves with articulated winged petioles, and has a leaf blade that is significantly longer and wider than the center leaflet of ‘Weeping Dragon’, while having a petiole that is significantly shorter and narrower. Leaf appearance for ‘Weeping Dragon’ is visibly quite different from either parent or ‘Carrizo’ (Fig. 1). In addition to differences in dimensions, ‘Weeping Dragon’ leaves are somewhat distinctive in having a darker green color than most similar hybrids, and having an irregularly contorted, curled, or twisted appearance. In the absence of a freeze, trees do not usually defoliate, or lose the leaves from the previous season until after new flush and leaves have emerged in the spring. Trees of ‘Weeping Dragon’ are compact, attractive, and exotic in overall appearance (Fig. 2A).

Leaf, spine, and fruit characteristics of fruiting trees for ‘Weeping Dragon’, its two parents (‘Cipo’ and ‘Flying Dragon’), and another hybrid of similar parentage (‘Carrizo’).

Single spines are found in most leaf axils, and are highly variable, but often very long and hooked, somewhat resembling the mythical claws of a dragon (Fig. 2B and C). The axillary spine of ‘Weeping Dragon’ is significantly longer than that of either parent or ‘Carrizo’ (Table 1), and is similar to the parent ‘Flying Dragon’ in having some curving of the spine. However, the curvature of the spine on ‘Weeping Dragon’ is much greater than that found on ‘Flying Dragon’ or other of its hybrids, and is even somewhat startling in appearance. Individual spines sometimes completely encircle the stem. Along with the spine curvature, stems are irregularly contorted and twisted, often exhibiting distorted and unpredictable turns, loops, and hooks (Fig. 2D). In addition to the contorted growth, stems of ‘Weeping Dragon’ have a pronounced weeping habit, although this trait is also somewhat variable and unpredictable. New flush sometimes grows horizontal or somewhat upright, but other new flush weeps or will grow straight down for 20 cm or more before turning to the horizontal. Some training of trees during growth may be necessary to develop an upright stature because of this pronounced weeping growth.

Flowers are white and similar in size and appearance to sweet orange (Fig. 2E). Fruiting is erratic, but when present, fruit is similar in size to that of ‘Carrizo’, with a length and diameter intermediate between the fruit of the two parents (Table 1), and yellow-orange in color at maturity (Fig. 2F). The quality of fruit from ‘Weeping Dragon’ has not been evaluated, but it should not be considered suitable for consumption. Propagation of ‘Weeping Dragon’ by seed has also not been evaluated. The potential for ‘Weeping Dragon’ as a novelty ornamental is outstanding. The overall effect from the combination of large curly dark-green leaves, large strongly-hooked thorns, severely contorted stems, and weeping habit is a unique and attention-getting small tree, ideal as a focus specimen for the patio or landscape.

It should be noted that the contorted and weeping traits were clearly derived by sexual recombination between the two parents of ‘Weeping Dragon’. The seed parent, ‘Flying Dragon’, exhibits the contorted growth habit, including hooked thorns and twisted shoot growth. These traits have been studied and demonstrated to be inherited among progeny, especially when ‘Flying Dragon’ is used as the seed parent (Cheng and Roose, 1995; Yoshida, 2005). The pronounced weeping habit of the pollen parent, ‘Cipo’, has been described (Bowman, 1994), and has been demonstrated to be recovered among progeny when ‘Cipo’ is used as the pollen parent (Bowman, 1997). ‘Weeping Dragon’ was selected from one particular progeny group of this parental combination because it presented a particularly attractive combination of those two unique genotypes in a form that accentuates and beautifies the dramatic novelty of the combined traits.

‘Weeping Dragon’ was selected and evaluated as a novelty ornamental cultivar, and as such, it is assumed that it will typically receive frequent attention and excellent care by botanic gardens and adventurous home gardeners who value its unique appearance. As a novelty scion cultivar, its tolerance of common biotic and abiotic conditions is considered acceptable, but these attributes were not thoroughly studied. Trees of ‘Weeping Dragon’ for study were grafted onto ‘US-812’ and ‘Carrizo’ rootstocks, and both appeared completely compatible with this scion for long-term growth. The name ‘Weeping Dragon’ was chosen to represent the combination of the weeping trait, along with the contorted trait from ‘Flying Dragon’, as well as because of the way the large hooked thorns and drooping twisted stems might resemble a mythological dragon crying in repose.

Source plant material for ‘Weeping Dragon’ is available from the Florida Bureau of Citrus Budwood Registration clean budwood program (3027 Lake Alfred Road—Highway 17, Winter Haven, FL 33881) and will be distributed, according to Florida Department of Agriculture and Consumer Services regulations. Plant tissue for research, as well as additional information on ‘Weeping Dragon’ may be obtained from Kim D. Bowman, USDA, ARS, USHRL, 2001 South Rock Road, Ft. Pierce, FL 34945 (kim.bowman@ars.usda.gov). Genetic material of this release will be deposited in the National Plant Germplasm System where it will be available for research purposes, including development and commercialization of new cultivars. Appropriate recognition should be made if this germplasm contributes to the development of a new breeding line or cultivar.

Mention of a trademark, warranty, proprietary product, or vendor does not imply an approval to the exclusion of other products or vendors that also may be suitable. 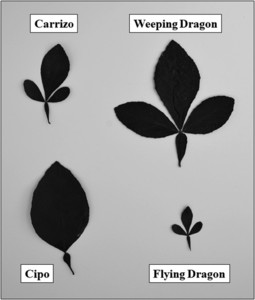 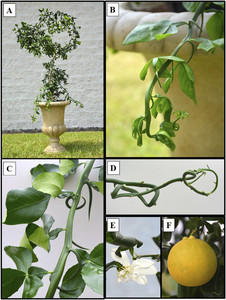