The Centro de Edafología y Biología Aplicada del Segura–Consejo Superior de Investigaciones Científicas (CEBAS-CSIC) Almond Breeding Program began in 1971, when the germplasm collection was established, with the aim of obtaining new self-compatible and late-flowering cultivars. The first crosses were carried out in 1985.

Late flowering decreases the risk of late frosts coinciding with flowering or fruit formation, thus avoiding crop losses. Self-compatibility enables a cultivar to produce fruit after pollination with its own pollen, which has enormous advantages for the grower compared with traditional self-incompatible cultivars (Dicenta et al., 2002). Self-compatibility allows the grower to cultivate only one cultivar in the orchard, not occupying space with the pollinizer. Pollination and fruit set is more efficient because all trees flower simultaneously, and each flower is able to pollinate itself. Therefore, beehives are not compulsory, although are highly recommended. Furthermore, poor weather conditions (low temperatures, wind) affect fruit set to a lesser extent. Finally, harvesting can be carried out at the same time, and the storage of a single cultivar is easier.

As a result of our first works, we obtained the cultivars Antoñeta and Marta in 1995 (Egea et al., 2000), both of which are widely cultivated in Spain and abroad today. Among other benefits, obtaining these late-flowering cultivars has made it possible to expand almond culture to cold areas where almonds previously could not be cultivated because of frosts.

However, there are still colder areas where even the late-flowering cultivars can freeze some years. To make it possible to cultivate almonds in these areas with minimal risk, we started a new stage of the breeding program at CEBAS-CSIC in 1995. This time, we had many advantages over the previous stage: highly improved plant material, knowledge of the genetic control of the most important traits and efficient molecular markers for molecular-assisted selection for self-compatibility. The main objective was to delay the flowering time as much as possible and to maintain the good characteristics of our late-flowering cultivars, including self-compatibility. This would allow for the monovarietal cultivation of almonds in areas where the late cultivars currently freeze and in new areas that were previously unable to cultivate almonds due to the high risk of frost.

As a result of our work, we registered the almond cultivars Penta and Tardona in 2007. In subsequent years, ‘Penta’ has proven to be an excellent cultivar for its extra-late flowering time, high productivity, and good organoleptic quality of the kernel. ‘Tardona’ is the latest flowering self-compatible cultivar released to date, but its lower productivity makes it advisable only in extremely cold areas.

Largely due to rising almond prices, the cultivated surface area in the world has increased dramatically in recent years. Although this expansion has been general, an important part corresponds to new areas with a high risk of frost.

In Europe, large farms with hundreds of hectares are being added to small traditional farms. Although floral self-compatibility makes monovarietal cultivation possible, these big growers prefer not to risk everything on a single cultivar, and above all, they want to be able to stagger the harvest on such large farms.

In this context, we registered ‘Makako’ in 2017. This is the ideal cultivar to pair with ‘Penta’ when the producer decides to plant another cultivar in areas with a risk of frost. ‘Makako’ is also an interesting alternative to ‘Penta’ on its own.

In the case of ‘Makako’, because ‘Lauranne’ flowers earlier than ‘S5133’, pollen from ‘S5133’ was sampled the previous year and stored following the procedure described by Martínez-Gómez et al. (2000, 2002).

‘Penta’ and ‘Makako’ are extra-late flowering cultivars. Taking an average of several years and locations, ‘Penta’ flowers about 15 d after ‘Ferragnès’ (23 d later than ‘Nonpareil’), and ‘Makako’ blooms about 2 d before ‘Penta’, which can be more or less depending on the climatic conditions of the year and the altitude (Table 1). Flowering time depends on the chilling requirements (Egea et al., 2003; Prudencio et al., 2018; Sánchez-Pérez et al., 2012), and this has been where we have achieved the most important advances (Dicenta et al., 2005; Martínez-Gómez et al., 2017; Rubio et al., 2017).

Characteristics of the almond cultivars Penta and Makako and their progenitors.

‘Penta’ and ‘Makako’ are both self-compatible and fructify well under passive self-pollination after bagging the branches with closed bud flowers. This means that they do not need another cultivar in the orchard to be pollinated. On each flower, pollen is able to pollinate the stigma and produce a fruit. These cultivars can therefore be grown alone in solid monovarietal plots. Despite this, as for all self-compatible cultivars, we recommend placing beehives on the orchard to increase production. The S genotype of ‘Penta’ and ‘Makako’ is S5Sf (Table 1).

‘Penta’ is a tree of intermediate vigor, so in traditional plantations, it is advisable to use vigorous rootstocks. ‘Makako’ is vigorous. The habit and branching of both cultivars are balanced, which facilitates pruning. Under the conditions in which they have been evaluated, they have shown little susceptibility to the most important diseases (Polystigma, Fusicoccum, Monilinia, Taphrina, etc.).

Both ‘Penta’ and ‘Makako’ are productive, although this always depends on the growing conditions. Productions of more than 2000 kg kernel/ha can be easily reached with suitable conditions. The production is located in spurs, brindles, and mixed twigs, which favors stable production year by year.

One of the main differences between ‘Penta’ and ‘Makako’ is their ripening time. ‘Penta’ matures early (about 10 d before ‘Ferragnès’), whereas ‘Makako’ matures about 10 d after ‘Penta’ (with ‘Ferragnès’) (Table 1). This feature makes ‘Makako’ the ideal cultivar to pair with ‘Penta’ on large farms where growers want to include another cultivar to stagger the harvest. The clean opening of the mature hull in both cases facilitates the hulling of the fruit, which, without premature fall, is easily picked up by vibration.

Taking an average of several samples from different years and locations, ‘Penta’ has kernels of about 1 g and a shelling percentage of 30%. The kernel of ‘Makako’ is larger, reaching 1.2 g and a kernel percentage of 33% (Table 1). Both are hard-shelled, which offers protection against birds, squirrels, and insects (navel orange worm) and therefore prevents infection with the aflatoxigenic fungus Aspergillus flavus (Dicenta et al., 2003). The appearance of the kernel is beautiful in both cultivars; it is amygdaloid (Fig. 2) without double seeds. ‘Penta’ has a clear seedcoat, which is a particularly interesting trait.

‘Penta’ and ‘Makako’ also have an interesting chemical composition with high sugar (4.43% and 4.34%, respectively) and fat (55.73% and 57.68%, respectively) content. The high concentrations of these compounds make ‘Makako’ and, especially, Penta, sweet and tasty.

These two extra-late flowering and self-compatible cultivars make it possible to safely cultivate almond in monovarietal plantations in areas where almond is frequently frozen and also in colder zones in which almond has not been introduced to date because of the risk of frost.

‘Penta’ and ‘Makako’ are the property of the Consejo Superior de Investigaciones Científicas and have been registered in the Registro de Variedades Comerciales of the Oficina Española de Variedades Vegetales and in the Official Register of Plant Varieties of the European Community Plant Variety Office.

In shell fruits and kernels of almond cultivars Penta and Makako. 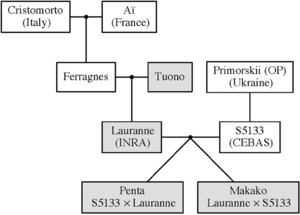