Formosan sweetgum (Liquidambar formosana Hance) is a handsome landscape tree with unique three-lobed leaves, brilliant yellow to red fall color, and tall stately form. It is native to China and distributed in temperate, montane forests across the southern and eastern range of the country, as well as in South Korea and Taiwan (Dirr, 1998; Hoey and Parks, 1994; Hong et al., 2003). The species was introduced to North America in 1884 and is considered to grow rapidly and perform well in U.S. Department of Agriculture (USDA) hardiness zones 7–9 (USDA, 2012). Formosan sweetgum belongs to the Altingiaceae family and is closely related to the American sweetgum (L. styraciflua L.), a native of the eastern United States and the cloud forests of eastern Mexico and Central America. It is closely related to L. acalycina H. T. Chang, another taxon native to China with similar three-lobed leaves but which differs in the number of capsules per fruit (Grimshaw and Bayton, 2009; Hoey and Parks, 1994; Hong et al., 2003). In addition to being an excellent ornamental tree, the wood of L. formosana is used for the production of timber and resin, while stems, leaves and fruit are used for medicine (Dirr, 1998; Durkovic et al., 2005; Gilman and Watson, 1993; Hong et al., 2003; Zomlefer, 1994). Liquidambar formosana is not widely planted as an ornamental in the United States and has a limited presence in American botanical gardens. Despite its sparse use, it deserves more recognition for its unique leaf shape and excellent fall foliage color. ‘Formosan Gold’ sweetgum offers a unique cultivar of the species with attractive yellow to chartreuse foliage during the growing season.

The original plant of ‘Formosan Gold’ was from seed received from the Taiwan Forestry Research Institute in 1998. A golden-foliaged seedling was found among the green-foliaged seedlings at the University of Georgia Tifton Campus in the summer of 1998. At planting on Mar. 2, 2001, the tree was 1.53 m in height and in 2010 had reached 10.2 m. Clonal trees from rooted cuttings have been planted at the University of Georgia Tifton Campus, the University of Georgia Durham Horticulture Farm in Watkinsville, GA, Cox Arboretum in Canton, GA, Leu Gardens in Orlando, FL, Jackson Nursery in Belvidere, TN and the Atlanta Botanical Garden location in Gainesville, GA. To date, all clonally propagated trees display the same foliar phenotype.

Liquidambar formosana ‘Formosan Gold’ is a deciduous tree with observed heights estimated to be 9–13 m at about 18 years of age. The original tree in Tifton, GA is estimated to be in excess of 12 m tall by 8 m wide at 16 years after planting. Two other clones planted in 2003 in Belvidere, TN and in 2006 in Orlando, FL have approximate heights of 9 m and 12 m, respectively, in 2018. The cultivar has an upright and oval to rounded habit with age (Fig. 1). Leaves are alternate, simple and 3-lobed (rarely 5-lobed, with bottom lobes appearing as a subset of bottom-most lobes) with palmate venation (Fig. 2). Mature leaves are generally wider (about 15.3 cm) than long (≈13.2 cm). Margins are serrate to finely-serrate and lobe apices are acuminate to caudate. The base of the leaf is typically cordate with a few leaves truncate or sagittate (5-lobed leaves). Adaxial leaf color varies with age or location on the branch. Newly emerged leaves have an adaxial surface color of red-purple (red-purple group 59A; Royal Horticultural Society (RHS), 1995) and are pubescent on both surfaces. Fully expanded foliage near the distal end of the branch displays a light yellow adaxial surface color (green-yellow group 1B; RHS, 1995) (Figs. 2). As leaves age, color ranges from chartreuse yellow (yellow-green group 145A; RHS, 1995) to a light green (yellow-green 144A; RHS, 1995) further into the canopy, or the proximal end of the branch (Fig. 2). Once foliage fully expands, leaves are glabrous on the adaxial surface. The abaxial surface has very little pubescence with a sparse amount at the base of the prominent, rounded central vein. Stipules are linear, ≈1.0–1.6 cm long with a slight curve or curl along their length, and are adnate to the petiole base. Grayed-red (180B&C; RHS, 1995) petioles of mature leaves average 4.3 cm long with a slight widening at their base and lack pubescence. Foliage changes color in the fall and ranges on the plant from dark yellow (yellow group 7A; RHS, 2001), orange (orange group 26A; RHS, 2001), to dark orange-red (grayed-orange group 169A; RHS, 2001) (Fig. 3).

Bark on mature tree trunks in Tifton is gray (201C; RHS, 1995) and moderately flaky with shallow furrows. Branches and less mature trunks have smoother bark and stems are lenticellate. Dormant buds have several overlapping scales: the lowest are brown (200C; RHS, 1995) with no pubescence, fading to brown (200B; RHS, 1995), and at the very tip, scales are brown (200A; RHS, 1995) with pubescence. Buds can contain leaves only or mixed leaves and reproductive structures. Bud break occurs from the last week of February until the first week of March in Tifton, GA and the second to third week of March in Watkinsville, GA. Trees are monoecious with separate male and female inflorescences. The male inflorescence is similar to that of the species, being a raceme with many stamens on each head. On reproductive trees male and female inflorescences emerge with new leaves and male flowers quickly senesce after 1 to 2 weeks. The female inflorescence is a globose head which blends in with the foliage color and consists of many ovaries with extended and recurved styles that persist through maturity. Each ovary has a pair of beak-like calyxes and as the fruit matures in late summer, either a filled, winged seed or more often an aborted small seed is released. Fruit is a syncarp of dehiscent, woody capsules that have an average of 38 per fruit and are brown (200C; RHS, 1995). Mature fruit peduncle length averages 8.3 cm and fruit width averages 3.2 cm. The parent tree first produced fruit at 13 years of age. Fruit is produced in limited quantities but remain relatively hidden among the vibrant foliage and persist throughout the summer and often through the winter after leaf drop. Holotype: field grown plant, Ornamental Horticulture Research Area, University of Georgia, Tifton Campus, Tifton, GA (lat. 31°47′66″N, long. 83°52′02″ W). A specimen has been deposited at the Valdosta State University Herbarium, Ruter (VSC).

Three to four node semihardwood terminal cuttings collected in Tifton, GA in the third week of May (2002 and subsequent years) have had rooting success of about 75%. Cuttings were dipped in a 1:2 dilution of rooting hormone to water (IAA + NAA; Dip ‘N Grow, Inc., Clackamas, OR), planted in a substrate of pine bark and perlite (2:1, v/v) and placed under intermittent mist for several weeks. Cuttings were also taken from a clone in Watkinsville, GA in mid to late Summer 2017, treated similarly and yielded comparable rooting percentages. Although rooting has been high during the growing season, survival through the subsequent winter has been low. ‘Formosan Gold’ has been successfully side-veneer grafted onto L. styraciflua understock. Propagation via somatic embryogenesis has been attempted using dormant mixed buds and immature fruits but resulted in no embryogenic cultures or somatic seedlings. Root suckers produce foliage true-to-type, so root cuttings may be another propagation method worthy of experimentation. No seed collected from ‘Formosan Gold’ in Tifton has germinated. Hybrids between L. styraciflua and L. formosana have been produced via crossing (Santamour, 1972; Vendrame et al., 2001), yet natural hybridization with L. styraciflua in South Georgia is unlikely as the native species often flowers 2–4 weeks later than ‘Formosan Gold’, which could account for the lack of observed seedlings surrounding the tree. Additionally, research indicates Liquidambar species to be largely self-sterile (Santamour, 1972; Schmitt, 1964). In late summer, foliage can develop fungal leaf spots (Colletotrichum spp.), but infection does not appear to affect the overall health or growth of this cultivar (Little, 2016). The tree has performed well for several years in Belvidere, TN (USDA hardiness zone 7b), Canton, GA (zone 7b), Gainesville, GA (zone 7b), Watkinsville, GA (zone 8a), Tifton, GA (zone 8b), and Orlando, FL (zone 9b). Across these locations there have been no reports of major pest problems, winter injury or invasiveness. The tree growing in Tennessee survived winter low temperatures of −17.2 °C with no damage (Ray Jackson, personal communication). Only one cultivar of Liquidambar formosana, ‘Afterglow’, is known to exist in the United States. It originated from the Saratoga Horticultural Foundation of California and is rarely sold in nurseries in the United States. ‘Afterglow’ differs from the species by displaying purplish-red new growth and rose-red fall color (Jacobson, 1996; Thomas, 1961) with an asymmetrical form (Santamour and McArdle, 1984). In addition to ‘Afterglow’, a few other cultivars are listed on the Botanic Gardens Conservation International database (BGCI, 2018), however, they appear to have little horticultural significance or do not exist in the trade. ‘Monticola’ is listed and described in previous reports, but scientists doubt its validity as a distinct cultivar (Jacobson, 1996; Santamour and McArdle, 1984; Wilson, 1913). ‘Formosan Gold’ differs from L. formosana and ‘Afterglow’ by having bright yellow to yellow-green foliage all spring and summer, and a minor distinction is shorter petiole length (Table 1). This cultivar can be used similarly to Formosan sweetgum: as a shade tree in a park, lawn or wide street with the bonus of bright chartreuse foliage (Gilman and Watson, 1993). The unique foliage color displays ‘Formosan Gold’ sweetgum can bring to public or residential landscapes make it a valuable addition to the commercial ornamental market. 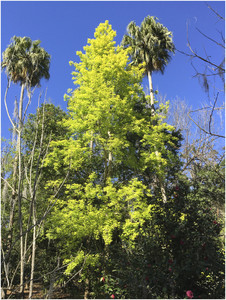 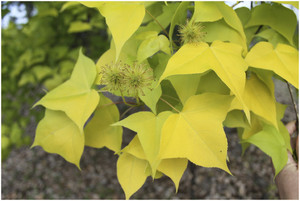 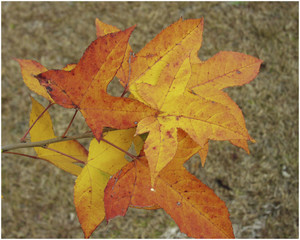