The Role of Spur Leaves, Bourse Leaves, and Fruit on Local Flower Formation in Apple: An Approach to Understanding Biennial Bearing

Consistent fruit production is highly dependent on flowering frequency. Flower formation is related to biennial bearing and continues to be a major challenge for the apple industry and many other fruit tree industries worldwide. Biennial (or alternate) bearing is the “fluctuation of cropping from year to year caused by irregular flowering” (Hirst, 2017). Despite considerable research, the underlying mechanisms of biennial bearing remain largely unknown (Bangerth, 2006, 2009; Hoad, 1978; Jonkers, 1979; Monselise and Goldschmidt, 1982; Singh, 1948; Xing et al., 2015). In apple trees, biennial bearing varies among cultivars and appears to be under both genetic and environmental control (Guitton et al., 2011; Hanke et al., 2007; Monselise and Goldschmidt, 1982). Factors that regulate flower formation in apple trees include leaf area (Davis, 2002; Sahulka, 1967), shoot growth (Luckwill, 1970; Sahulka, 1967), bourse length (Dennis and Neilsen, 1999), crop load (Embree et al., 2007; Meland, 2009), and seed number (Chan and Cain, 1967). It is unclear how these different factors interact to promote or inhibit flower formation in biennial cultivars or why these factors do not have the same effect in annual cultivars. For example, most annual cultivars, such as ‘Gala’ and ‘GoldRush’, tend to flower regularly despite characteristics usually associated with flowering inhibition such as high seed numbers. On the other hand, some biennial cultivars, such as ‘Honeycrisp’ and ‘Golden Delicious’, have moderate seed numbers yet often exhibit biennial bearing. Some researchers have suggested that leaves, fruit, and seeds activate or inhibit flower formation pathways by affecting the endogenous balance of plant growth regulators (Bangerth, 2009; Hanke et al., 2007). A recent study involving quantitative trait loci in apples suggested that biennial bearing is under control of plant growth regulators genes (Guitton et al., 2011).

The transition of apple buds from vegetative to a floral state requires sufficient leaf area around the bud (Sahulka, 1967); however, the role of such leaves in flower formation pathways is not well understood (Grochowska, 1963). Leaves may affect flower formation in several ways. They provide carbohydrates and plant growth regulators, and work as the main receptors for environmental signals. Moreover, transpiring leaves increase the flow of substances transported via the xylem stream. It is well understood that flower induction genes are active in the leaves (Hanke et al., 2007). It is commonly accepted that flower formation occurs in apple trees when shoot growth ceases (Luckwill, 1970). Removal of leaves can reduce flower bud formation (Childers et al., 1995; Fulford, 1960; Harley et al., 1942), and may be a practice to manipulate biennial bearing because partial defoliation in off-years prevents excessive flower formation in on-years (Davis, 1957; Fulford, 1960). In these studies, partial defoliation reduced but did not totally inhibit flower formation. Return bloom was suppressed with whole-tree and partial-tree defoliation in ‘Braeburn’, ‘Golden Delicious’, ‘Ramey York’, and ‘Fuji’ (Davis, 2002), but defoliation effects on flower formation varied among cultivars (Sahulka, 1967). There is a clear relationship between flower formation and defoliation time and severity because inhibition of flower formation declined as defoliation time was delayed (Davis, 1957; Liewelyn, 1968) and as defoliation severity was decreased (Harley et al., 1942; Tustin et al., 1997).

In 1948, Singh suggested that reducing carbohydrate supply by reducing leaf area inhibits flower formation. Although there have been positive correlations between carbohydrate content as an essential substrate for flower formation and flower intensity, results have been variable. It appears that sucrose could be the signal in flower induction (Xing et al., 2015).

An apple fruiting spur produces two different types of leaves, spur leaves (SL) and bourse leaves (BL). SL grow directly from the spur, and BL grow from subsequent vegetative growth on the spur called the bourse shoot (Fig. 1). If the flower formation signals are perceived in the terminal meristem of the bourse shoot, floral buds will be formed for the following year’s crop (Abbott, 1960).

It remains unclear whether the requirement for leaf area in close proximity to the potential flowering bud is similar in annual vs. biennial cultivars. Therefore, we investigated differences in the regulation of flower formation between two Malus cultivars, ‘Honeycrisp’, a biennial cultivar, and ‘Gala’, an annual cultivar. The effect of spur defoliation and fruiting treatments, and their interaction, on local flower formation were evaluated. We hypothesized that in response to these treatments, the cultivars would have different patterns of flower formation from year to year. Such information would help clarify the roles of SL and BL, and the presence of fruit, on flower promotion and inhibition signals within the spur.

This experiment was conducted on ‘Gala’ trees planted in 2001 and growing on B.9 rootstock, and mature ‘Honeycrisp’ trees planted in 2003 and growing on M.7 rootstock. Both cultivars were planted at a spacing of 3 m × 5 m at the Samuel G. Meigs Horticulture Facility of Purdue University in Lafayette, IN. The climatic conditions of the state of Indiana can be described as a hot-humid continental climate. Trees were trained to a central leader form and were managed according to standard commercial practices. Crop load was adjusted manually by hand thinning at petal fall to achieve a medium crop load of 120–140 fruit per tree, one fruit per spur. In 2012, the year preceding the experiment, a series of severe spring frosts resulted in total fruit loss, which offered a standard previous crop load for all trees.

The experiment was arranged as a randomized complete block design. Six uniform healthy trees of each cultivar were randomly chosen at bloom time, based on the number of flower clusters and tree size. This experiment was conducted over three consecutive seasons, spring 2013, 2014, and 2015, on different trees within the same plantings used each year.

One hundred flowering spurs were randomly tagged on each tree at bloom using durable, plastic tags identified by colors and numbers. Four manual defoliation treatments were applied at petal fall on each tree, and each treatment was randomly assigned according to tag color. Treatments were reapplied as necessary on the same spurs 2 weeks and 1 month later because after defoliation, new leaves emerged on some spurs as bourses continued to grow. Treatments were control, SL defoliated, BL defoliated, and both spur and bourse leaves (SL + BL) defoliated.

On each tree, each defoliation treatment was applied to 15 fruiting spurs thinned to one fruit per spur (king flower only) and 10 defruited spurs. Because not all flowers set fruit and some fruit abscission occurred through the growing season, a higher number of replications for fruiting spurs were selected compared with defruiting spurs. For fruiting treatments, only those spurs with fruit that persisted to the end of the growing season were included in analyses. Fruit were harvested and individually weighed during the commercial harvest period for each cultivar. During winter, while trees were dormant, tagged spurs were collected, bourse lengths measured using a ruler, and bourse buds were dissected under a dissecting microscope (Olympus Corp., Center Valley, PA) to determine flower formation for each bourse shoot (Hirst and Ferree, 1995).

Data analyses were conducted using flower formation and bourse length as response factors. Many spurs, especially on ‘Honeycrisp’, formed more than one bourse shoot. For flower formation, comparisons were made among spurs so that if any bourse on a spur formed a flower, it was considered to be a flowering spur. However, for bourse length, all bourses on each spur were summed resulting in total bourse length per spur. For each cultivar, treatments were compared within each year separately. Data are presented as proportion flower formation for each cultivar in each year (Tables 1 and 2). Comparisons were conducted using Tukey’s Studentized range test, package multcomp 1.2–12 (Torsten et al., 2008), procedure GLM, R 3.2.2 (14 Aug. 2015), “Fire Safety” within the R statistical package (R Foundation, Vienna, Austria).

Effect of defoliation treatments, fruiting treatments and their interaction on flower formation in ‘Honeycrisp’ apple during 2013, 2014, and 2015. 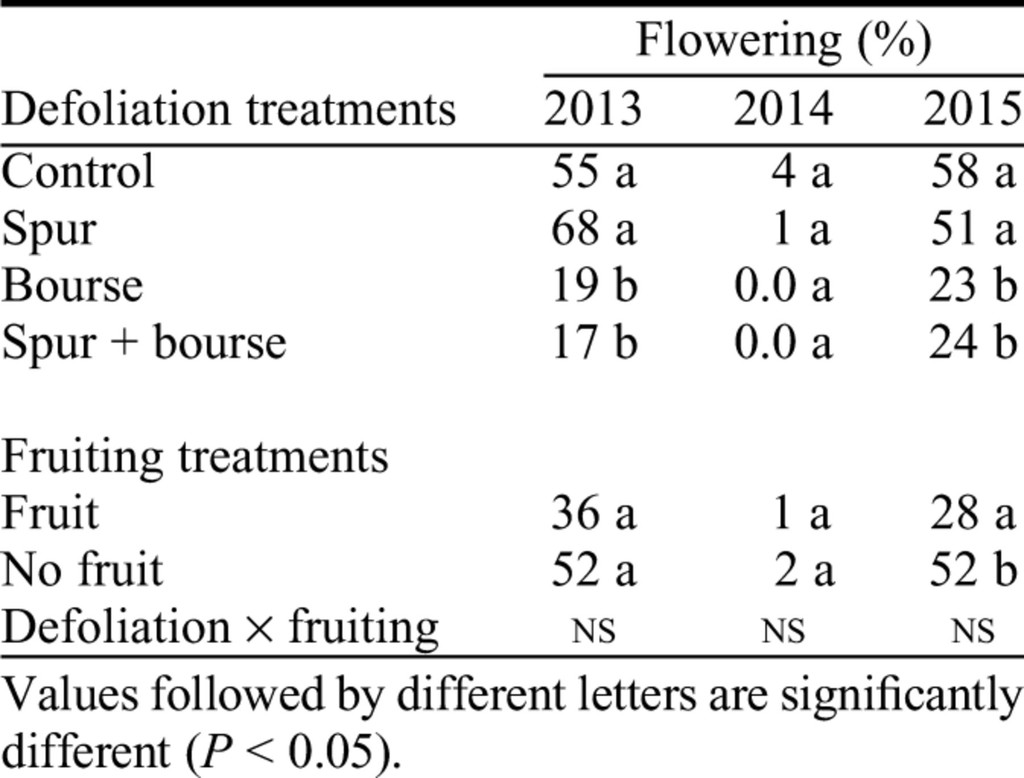 Effect of defoliation treatments, fruiting treatments and their interaction on flower formation in ‘Gala’ apple during 2013, 2014, and 2015. 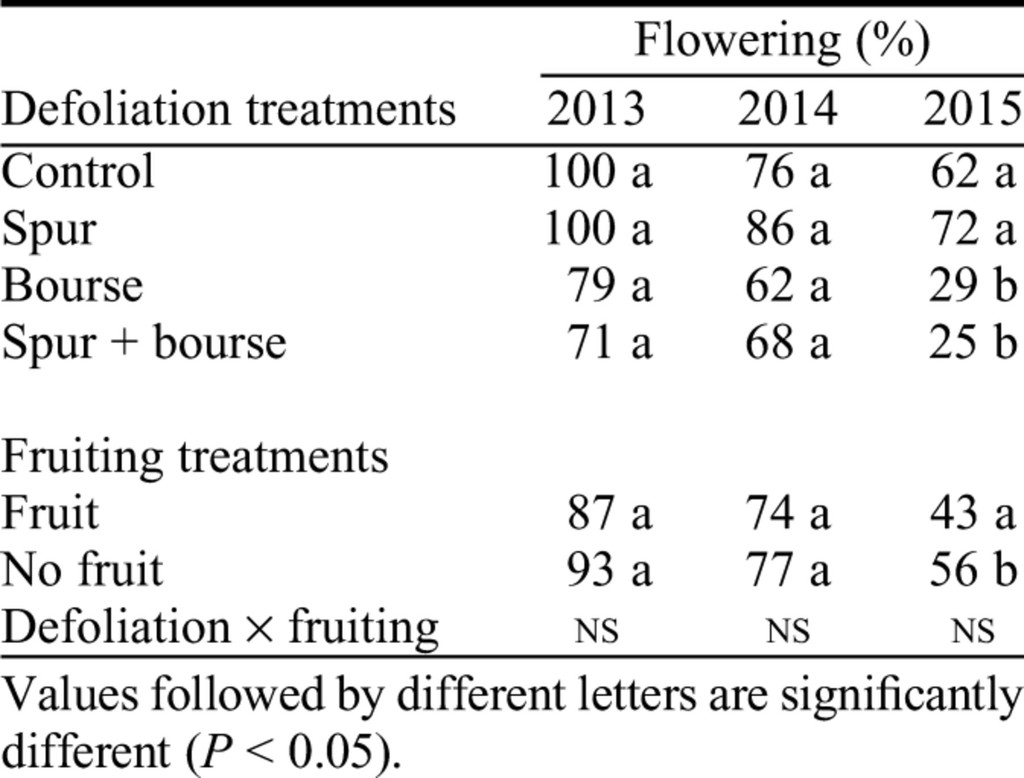 Similar trends in flowering of ‘Honeycrisp’ were observed in 2013 and 2015, where defoliating SL did not inhibit flower formation compared with controls, but defoliating BL only and BL + SL significantly inhibited flower formation compared with controls and SL defoliated (Table 1). Conversely, very low flowering of all ‘Honeycrisp’ trees across all treatments was observed in Spring 2014, and no significant differences were apparent. In years from 2013 to 2015, flowering in ‘Gala’ showed similar trends as seen in ‘Honeycrisp’, where defoliation of BL and BL + SL resulted in lower flowering, although the differences were only statistically significant in 2015 (Table 2).

Effect of defoliation treatments, fruiting treatments and their interaction on bourse length in ‘Honeycrisp’ apple. 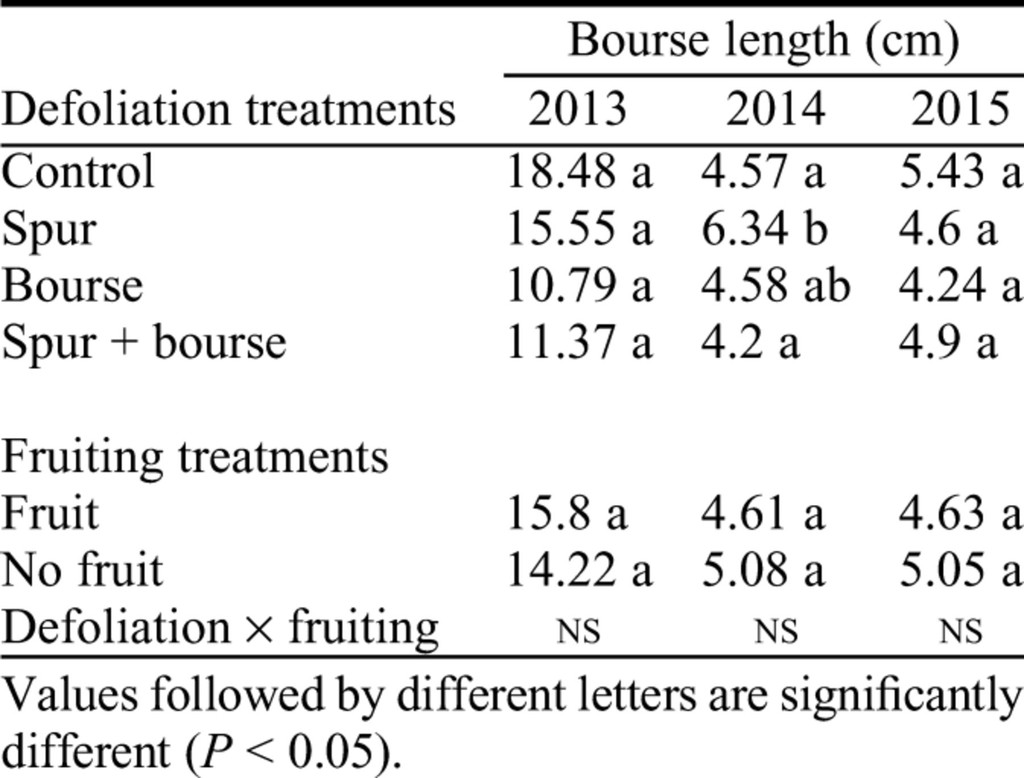 Effect of defoliation treatments, fruiting treatments and their interaction on bourse length in ‘Gala’ apple. 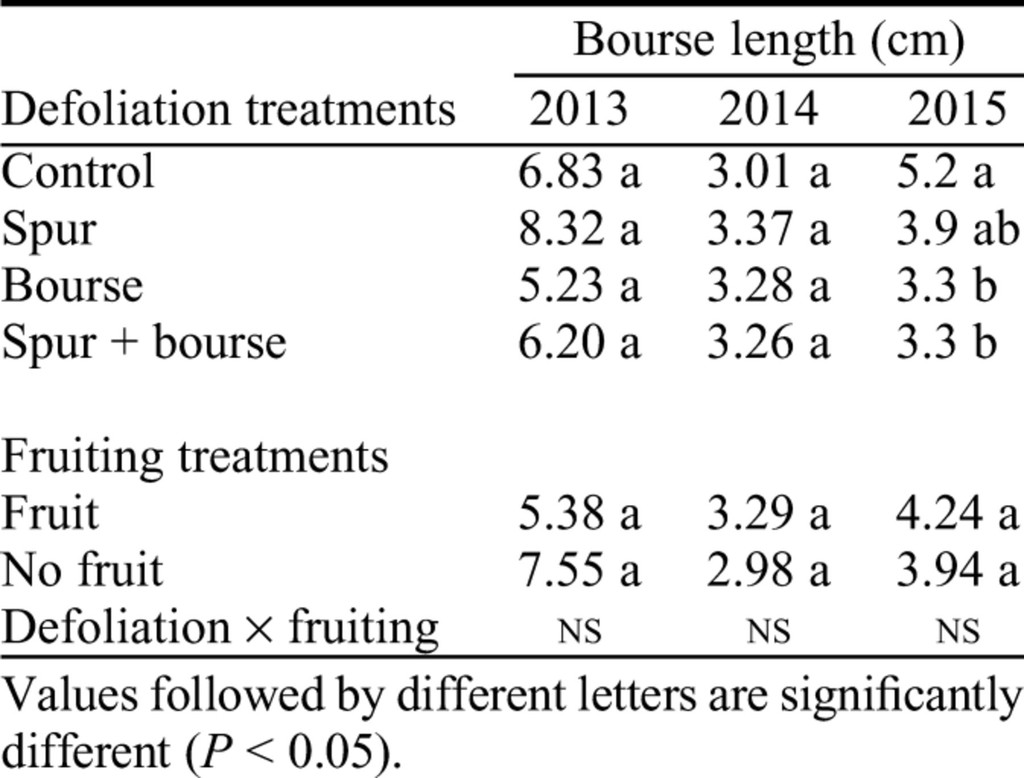 Crop load (Embree et al., 2007) and seeds within the fruit (Chan and Cain, 1967) have been suggested to be the source of flower formation inhibiting signals, and leaves have been considered to be the main source of flower formation promoting signals (Hanke et al., 2007). Nevertheless, the contribution of the whole tree to stimulate or inhibit local flower formation within the spurs of biennial and annual cultivars was rarely discussed. Our data suggested that both local defoliation and local fruiting are flower formation inhibitors. However, trees of ‘Gala’, an annual cultivar, and trees of ‘Honeycrisp’, a biennial cultivar, manipulate the local inhibition effects of fruiting and defoliation within their spurs in different ways. ‘Gala’ trees overcame the local inhibition effects in 2 years 2013 and 2014, but ‘Honeycrisp’ trees were not able to resist the local inhibition effects in any year (Tables 1 and 2). On the other hand, local fruiting and local defoliation affected flower formation, but did not affect bourse length; hence, it appears that bourse length was predetermined before bourses emerged, but flower formation was not predetermined before bourse emergence (Tables 3 and 4).

Effect of leaf and fruit on flower formation.

In conclusion, in this experiment, it was confirmed that BL play the main role in regulating flower formation, with SL having little effect. In addition, both bourse leaf defoliation and fruiting were shown to cause local inhibition of flowering, but their inhibition pattern varied between the two cultivars. Such differences between cultivars and may be related to the availability and metabolism of carbohydrates and/or flower promotion signals in the tree. Further understanding of the expression patterns of apple flowering genes within spurs of annual and biennial cultivars may contribute to increased understanding of the complex networks involved in apple flower formation and biennial bearing. 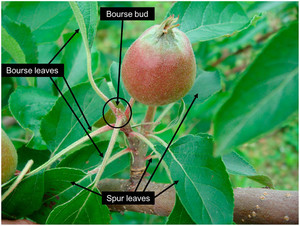 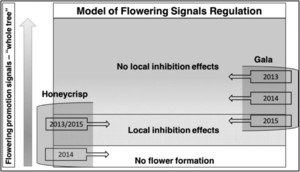