Over half of the world’s population lives in an urban setting (Worldwatch Institute, 2007), where ornamental plants provide environments that encourage the presence of wildlife and plant diversity (Damschen et al., 2006) and offer a myriad of social and economic benefits (Lohr et al., 2007; Wolf, 2004). However, continued reduction in limited natural resources worldwide increasingly necessitates novel approaches for the incorporation of low maintenance and low-input plant materials into urban landscapes (Cook, 1996; Dewey et al., 2006).

Seed of FEID 9025897 was originally collected (>10 plants) by the BPMC on the Charles E. Helvey Ranch east of the Rosebud River (T7S R39E NW1/4Sec 3; 45°31′39″N lat., 106°58′25″W long.) in Big Horn County, MT. The seed of the initially collected population was field increased by the NRCS-BPMC in 1994 and was received by the USDA-ARS Forage and Range Research Laboratory (FRRL) in 2004. Although the ancestry of plants in this population is unknown, indigenous, fine-leaved F. ovina L. (2x; sheep fescue), and F. idahoensis L. (4x; Idaho fescue) populations exist throughout this region of Montana (Barkworth et al., 2007) and, thus, could be progenitors of FEID 9025897. Therefore, in 2006, a preliminary molecular analysis of this population (five plants) was conducted by the FRRL using amplified fragment length polymorphism (AFLP) markers to characterize its genetic relatedness to other Festuca species. Data indicated that FEID 9025897 plants possessed relatively close genetic similarities with F. ovina L. (sheep fescue) (Jones et al., 2008). In 2009, a visual inspection of 270 FEID 9025897 cloned plants examined under replication in a Logan UT field nursery showed that the vast majority (>98%) were sterile (degenerated pistils and stamens) (Staub et al., 2014). Moreover, subsequent broad-based AFLP and cytogenetic examinations of these FEID 9025897 plants indicated that this population likely originated from a naturalized mating between F. idahoensis (4x) and F. ovina (2x), resulting in partially and fully sterile triploid (3x) and possibly aneuploid progeny (Staub et al., 2014).

To evaluate plant materials under low-input irrigation, water was applied by overhead sprinklers to field capacity only when the average soil moisture tension was less than 3.5 bars, as measured by a Delmhorst KS-D1 moisture tester and 12 gypsum soil blocks (Dolmhorst Instrument Co., Towaco, NJ) randomly placed throughout the trial at a soil depth of 9 inches. This resulted in an average irrigation frequency of once every 3 weeks in Vernon, UT, and once every month in Logan and Kaysville, UT, during the summer (June, July, and August) months. No supplemental fertilizer was applied to plants at planting, during establishment, or at any point during the experiment. Plots were hand-weeded each year from May to August and broadleaf weeds were also controlled with herbicide [mixture of 2,4-D (30.56%), mecoprop-p (8.17%), and dicamba (2.77%); MEC Amine-D; Loveland Products, Greeley, CO; U.S. Environmental Protection Agency (EPA) registration no. 34704-239] application once in April or May of each year at a rate of 3.0 (2,4-D), 0.8 (mecoprop-p), and 0.3 (dicamba) g·ha−1 a.i.

During the first 2 weeks of May of each year (2014 and 2015), the relative plant vigor of all entries was assessed using a 11-point visual rating scale from 0 to 5 (0.5 as units), where plant vigor (size, color, and transition from winter to spring growth) was defined as 0 = plant dead, 2.5 = plants possessing moderate biomass or leaf blade length with green (light to dark) foliage (tussock evident), and 5 = green plants having comparatively abundant aboveground biomass and/or long leaf blade length. During the last 2 weeks of June of each year, the height (centimeters) of each plant was measured as the distance from the plant base (soil surface) to the top of the highest floret at full anthesis (florets were gathered and straightened upward for measurement). Leaves and inflorescence spikes were harvested ≈10 cm aboveground when inflorescences were dry, then oven-dried at 60 °C to estimate plant biomass as total aboveground dry weight (grams/plant). After aboveground harvesting, plant width was measured as the diameter of the remaining leaves and stems. Persistence and flowering percentage was determined by counting the number of plants alive and with at least one inflorescence, respectively, within each plot at the time of harvest.

Color of the tussock (base), culm, and panicle were obtained through visual evaluation as assessed once at each location by 4–8 judges in late June or early July when optimal coloration was observed among cloned plants, which was location and year dependent. Judges examined and characterized coloration separately for four areas (hereafter referred to as rating areas) of the plant: 1) the base (tussock), 2) lower third, 3) middle third, and 4) top third of inflorescences of all plants within a plot. To avoid intense sunlight and standardize for daytime light levels, all ratings were taken for all entries in a trial on a single, clear day between 0800 and 1100 hr. Trials were rated separately on different days and, where possible, with the same judges. Logistically, however, it was not possible for all judges to rate all three trials. Colors assigned by judges were based on approximate alignments with Royal Horticulture Society (RHS) color chart designations (edition V; rhscf.orgfree.com). Judges identified green (RHS 140A), blue-green (RHS 125A), gray (RHS N187D), brown (RHS 165A), yellow (RHS 4A), gold (RHS 7C), orange (RHS N25C), pink (RHS 67D), salmon (RHS 58C), maroon (RHS N79C), and purple (RHS N78A).

The average percentage color distribution (APCD) for each rating area was calculated over replications and judges for each entry as the sum of the ratings for that color divided by the total number of ratings multiplied by 100 [e.g., % green at the base = (green base ratings/total base ratings)*100]. In addition, judges assigned an overall color intensity rating of 1–5 (0.5 units; 1 = no color, 3 = moderate color intensity, and 5 = vibrant color intensity) to entries by plot (one value per plot), which was then averaged over replications to provide an average relative color intensity (ARC) for each entry. Judges also assigned a plant habit rating for each plot on a scale of 1–3 (0.5 units), where inflorescences were 1 = upright (inflorescences between 0° and 30° from vertical), 2 = pendulant (30–60° from vertical), and 3 = approaching prostrate (60–90° from vertical). These ratings were also averaged over replications and judges for each entry. The APCD, ARC, and habit displayed for each entry at each rating area were compared with Festuca controls. Those entries that exhibited the most diversity of color (overall APCD) with the most intense hues (ARC) and a more upright habit were considered for release. Except for APCD, morphological and ARC data were analyzed on per-plot means in analysis of variance (ANOVA) using a linear mixed models analysis under which residuals for all traits were tested for normality using PROC UNIVARIATE in SAS software (Version 9.3 for Windows; SAS Institute, Cary, NC). The APCDs taken over locations for specific clones are presented according to RHS color chart designations by year.

Significant (P < 0001) differences among the clones and commercial checks were detected for all morphological traits measured, which were year and location dependent. Nevertheless, the mean differences among cultivars for all traits were, with rare exception, ones of magnitude and not rank order over years and locations.

Differences in culm and panicle coloration (APCD and ARC) were detected among the plants examined depending on evaluation year and location (Figs. 1 and 2; Tables 1 and 2). However, with rare exception, location color differences for entries were ones of magnitude (APCD for each color) and not rank (change in relative hierarchy). Thus, color counts were averaged over replications and locations to estimate the APCD of every rating area of each entry in each year. Differences in average ARC detected among entries over locations were also of magnitude (relative color intensity) and not rank (change in relative hierarchy). Hence, entry ARC values were also averaged over replications and locations to provide ARC values for each entry by year (Tables 1 and 2). 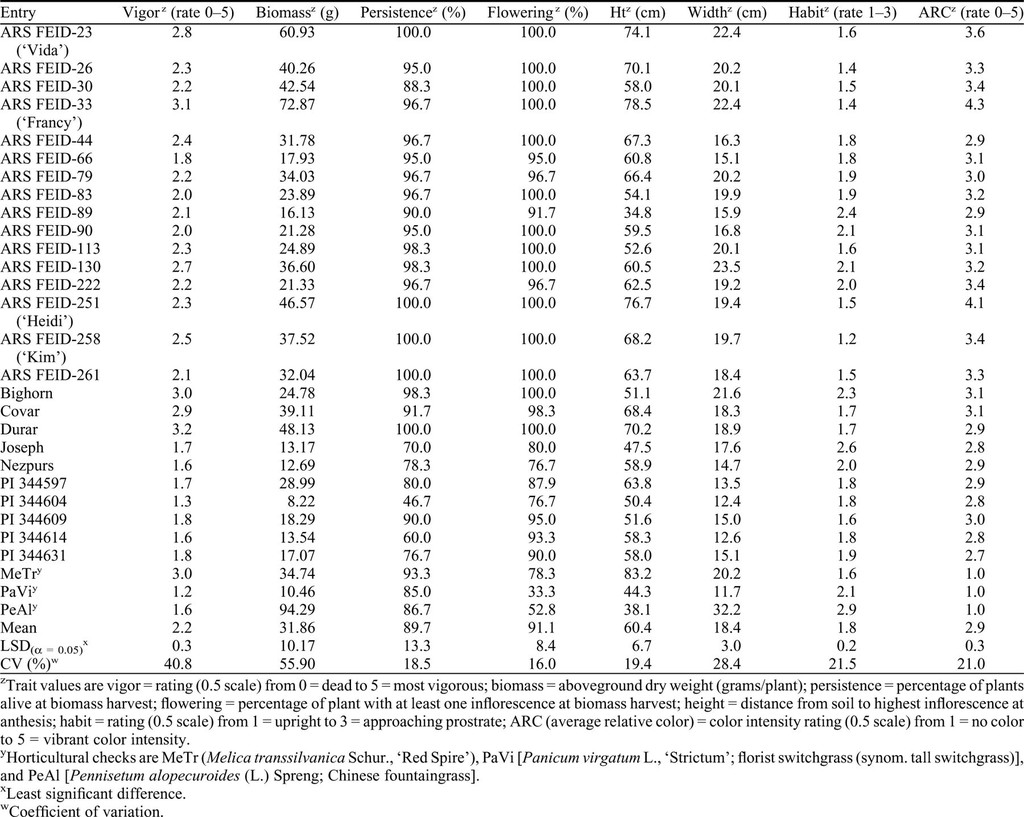 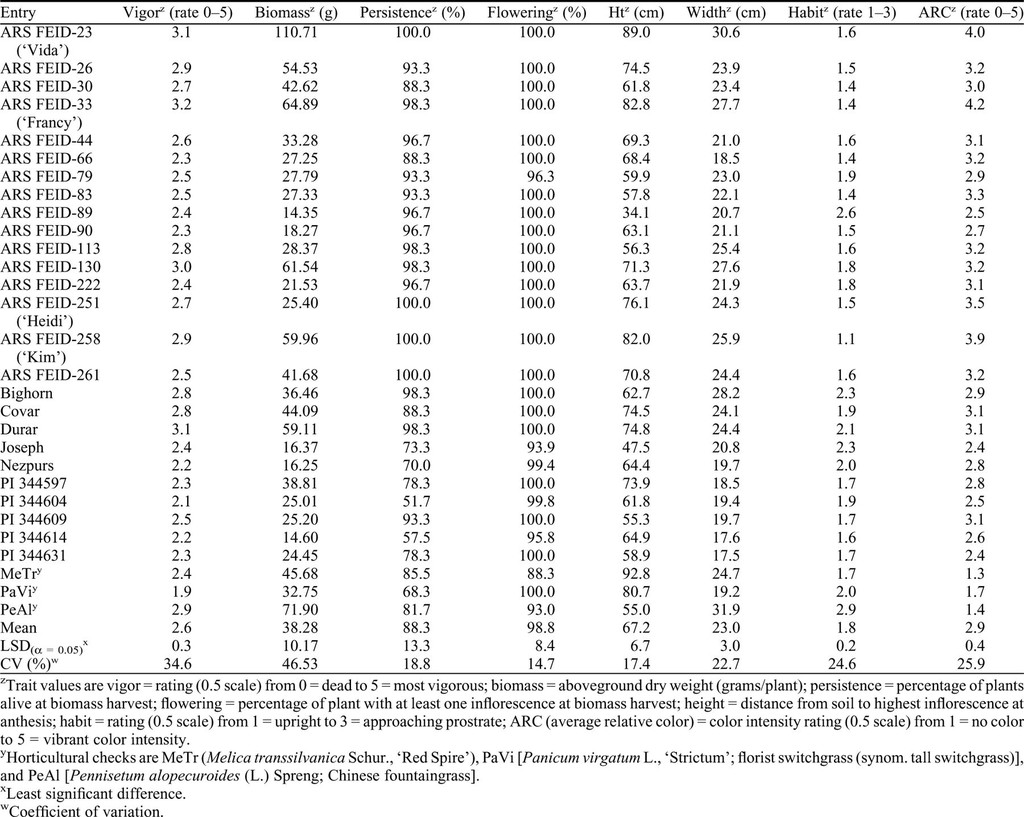 For those entries exhibiting panicle and culm coloration, purple, maroon, pink, salmon, yellow, and gold culm and panicle coloration were more frequent (APCD) and intense (ARC) at Logan and Kaysville than in Vernon regardless of the year (data not presented). Culms and panicles of plants evaluated in 2014 possessed comparatively more gold, yellow, and pink coloration than in 2015, which was marked by a general preponderance of maroon coloration along with lower percentages of pink and salmon depending on the clone examined (data not presented).

Sterile, tall-statured, erect ‘Francy’ [patent pending (PP) U.S. Plant Patent Application Serial No. (No.) 15/530,172], ‘Vida’ (PP No. 15/530,183), ‘Heidi’ (PP No. 15/530,171), and ‘Kim’ (PP No. 15/530,184) are naturally occurring hybrid fescue grasses that differ in their morphological attributes and are being released by the FRRL as a Festuca group designated as the “Freedom Fire Series” for horticultural applications because of their exceptional culm and panicle coloration in late June and early July (typically 3–4 weeks) under northern Utah growing environments (Fig. 3). All four grasses persist well, almost always produce inflorescences, and are generally more vigorous than the other entries and commercial controls under the conditions examined. However, ‘Francy’ and ‘Vida’ are larger and more vigorous than ‘Heidi’ and ‘Kim’. Although vegetative propagation rates were not formally measured, production observations indicate that although there are differences in relative propagation ability, the four selections propagate to commercial standards (‘Francy’ = ‘Vida’ > ‘Kim’ > ‘Heidi’; D. Heslop, personal communication, Biograss Sod Farms, 2016). Vegetative propagation success was lower between November and late February (i.e., short-days and reduced natural light). Even though all are relatively tall and erect, ‘Kim’ is more upright than the others. Although these germplasms vary in their tussock, clum, and panicle coloration depending on growing environment, their coloration is substantially more intense (higher ARC) with a wider range of colors (APCD) than the Festuca commercial controls examined herein. They are suggested for use in low-input urban garden settings as a backdrop for lower statured plant materials and/or as accents in formal gardens where coloration is desired in early summer (end of June, beginning of July). Their coloration and growth is optimized when grown in full light and where water is limited.

Samples of cloned plants are available for distribution to all interested parties for research purposes, through the USDA, ARS. Requests of clonal propagules for such purposes should be sent to Dr. Matthew D. Robbins, USDA, Forage and Range Research Laboratory, 700 N. 1100 E. Logan, UT 84322; e-mail matthew.robbins@ars.usda.gov. For commercial and private use, clonal plant material can be obtained from Biograss Sod Farms, 9980 S. State Street, Sandy, UT; Biograss.com after plant patent has been awarded.

Average percentage color distribution (APCD) according to Royal Horticulture Society color chart designation (under color name) of four selected Festuca ornamental grasses, ‘Francy’ (ARS FEID-33), ‘Vida’ (ARS FEID-23), ‘Heidi’ (ARS FEID-251), and ‘Kim’ (ARS FEID-258) in 2014. Profiles include four rating areas of the plant including the base (tussock), and the bottom third, middle third, and top third of the inflorescence (culm and panicle). Numbers indicate average percentage of each color in each rating area over three locations (Logan, Kaysville, and Vernon, UT) by 3–5 judges per location.

Average percentage color distribution (APCD) according to Royal Horticulture Society color chart designation (under color name) of four selected Festuca ornamental grasses, ‘Francy’ (ARS FEID-33), ‘Vida’ (ARS FEID-23), ‘Heidi’ (ARS FEID-251), and ‘Kim’ (ARS FEID-258) in 2015. Profiles include four rating areas of the plant including the base (tussock), and the bottom third, middle third, and top third of the inflorescence (culm and panicle). Numbers indicate average percentage of each color in each rating area over three locations (Logan, Kaysville, and Vernon, UT) by 3–5 judges per location. 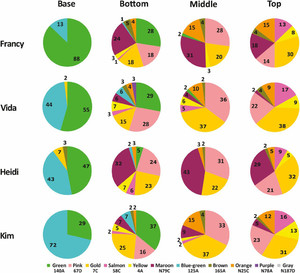 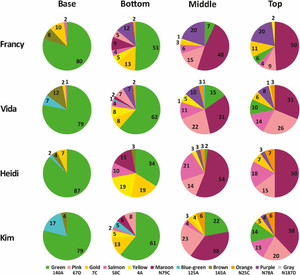 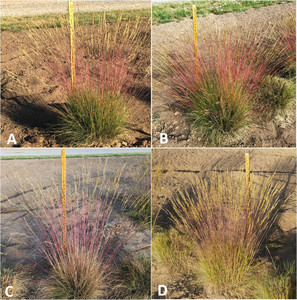