Lonicera japonica Thunb., commonly referred to as honeysuckle or Jin Yin Hua in Chinese, produces abundant fragrant flowers. Dried flowers and buds of honeysuckles are known as Flos Lonicerae, which has been a famous herb of traditional Chinese medicine for more than 1500 years (Li et al., 2015). Flos Lonicerae have been used to treat arthritis, diabetes mellitus, fever, and viral infections (Li et al., 2015; Shang et al., 2011). A total of 140 chemical compounds have been isolated from Flos Lonicerae ranging from essential oils, organic acids, flavones, saponins, and iridoids (Lee et al., 1998; Li et al., 2015; Palacios et al., 2002; Shang et al., 2011). Because different species and cultivars or even the same cultivar produced in different geographical locations vary in concentrations of these chemical compounds, the Chinese Pharmacopoeia (Committee for the Pharmacopoeia of People’s Republic of China, 2015) recommended using the content of 5-O-caffeoyl-quinic acid or chlorogenic acid (CGA) and luteolin (3′,4′,5,7-tetrahydroxyflavone) as two indicators for evaluating the quality of Flos Lonicerae (Shang et al., 2011).

CGA has multiple pharmacological actions including antioxidation, antibacteria, antivirus, anti-inflammatory, and antiliver fibrosis. It can suppress N-nitrosating reactions and inhibit hepatic glucose 6-phosphatase, which is a significant factor in the abnormal diabetic state (Yang et al., 2004). CGA can strongly suppress adeno-associated 3 and 7 viruses, coxsackie B3 and B5 virus, and respiratory syncytial virus (Hu et al., 2001). In accordance with the Chinese Pharmacopoeia, Flos Lonicerae used in traditional Chinese medicine must have a CGA content greater than 1.5%. Luteolin shows antivirus actions and has been used as an influenza virus neuraminidase inhibitor (Liu et al., 2008). It also inhibits growth and migration of human lung cancer cells (Zhao et al., 2011). Flos Lonicerae used in traditional Chinese medicine must have luteolin content higher than 0.05% (Committee for the Pharmacopoeia of People’s Republic of China, 2015).

‘Fenglei’ (Fig. 1A and B) is a naturally occurring mutant selected from L. japonica ‘Juhuayihao’ (Fig. 1C and D). It was discovered in 2010 during a survey of lonicera germplasm in Fei County, Linyi city, Shandong Province, China. A key characteristic of this mutant is that the flowers never open. This isolate was propagated by stem cuttings from 2010 to 2012 for establishing a large number of propagules. The resultant plants were evaluated from 2012 to 2016 in lonicera production farms of the Linyi city area. The mutant was stable over the last 4 years and named ‘Fenglei’ in accordance with the International Code of Nomenclature for Cultivated Plants (Brickell et al., 2009). ‘Fenglei’ means a cultivar with abundant flower buds. A specimen of the cultivar has been deposited at the experimental station in Hunan Academy of Forestry as a cultivar standard.

Flower buds appear in early May in Linyi, Shandong Province, China; young buds are green and appeared axillarily as pairs per leaf on the terminal 6 to 10 nodes (Fig. 1B). Mean flower numbers range from 20 to 44 per branch. Corollas are tubular and become whitish yellow as they mature. The upper half tube expands more than the base half, resulting in slightly curved corollas. The flowers never open but release a sweet fragrance. The mean length of a mature flower is about 53.9 mm, apex diameter about 4.2 mm, and base diameter about 1.9 mm. ‘Fenglei’ flowers twice a year with the first flowering season occurring in May and the second season in July (Table 1). The first flowering season produces 90% of harvestable flowers. ‘Fenglei’ plants do not bear fruit.

‘Fenglei’ is primarily propagated by stem cuttings. Newly mature stems with yellowish brown color (semihard wood) are the best stage to take single- or double-node cuttings. To ensure high rooting percentages, the basal end of hard wood cuttings should be immersed in a 300 mg·L−1 KIBA (potassium salt indole-3-butyric acid) solution for 15 s before rooting in a soilless substrate composed of three parts of peat and one part of perlite by volume. For softwood cuttings (stems with yellowish green color), cutting ends should be immersed in 600 mg·L−1 KIBA solution for 10 s and rooted in a substrate consisting of two parts of peat and one part of perlite by volume. Cuttings should be placed under intermittent mist of 10 s every 30 min for the initial 2 weeks. Rooting percentages can be as high as 94.1%.

To quantify flower yield, CGA, and luteolin contents in flowers of ‘Fenglei’, we conducted a field experiment at a farm in Linyi city, Shandong Province. Rooted cuttings of ‘Fenglei’ and ‘Juhuayiha’ were planted in field plots in 2012 and spaced at 1.0 m × 0.8 m. Each plot was planted with 100 plants. The experiment was a completely randomized design with five replications (five plots). Weeds were controlled manually, and plants were fertilized as described above. The plants started flowering in 2015. Flower characteristics and yield were recorded from 10 randomly selected plants per plot for each cultivar. Data were analyzed by analysis of variance (SPSS Inc., Chicago, IL), and means were separated by Student’s t test. Flower buds of ‘Fenglei’ never opened (Fig. 1A and B), whereas flower buds of ‘Juhuayiha’ opened in 2–3 d (Fig. 1C and D). ‘Juhuayiha’ plants flowered three times (May, July, and August) a year (Table 1), each accounting for 50%, 30%, and 20% of the total number of flowers produced; thus, flowers were harvested three times a year. ‘Fenglei’ flowered twice (May and July), with more than 90% of flowers produced in the first-round flowering. Owing to the high cost of harvesting by hand and low amount of flowers produced in the second-round flowering, ‘Fenglei’ flowers were harvested once a year. Fresh and dry weights of 1000 fresh flowers, flower length, and flower diameter of ‘Fenglei’ were significantly greater than those of ‘Juhuayiha’ (Table 2). As a result, total flower fresh and dry weights per plant as well as flower yield per hectare of ‘Fenglei’ (one harvest) were significantly higher than those of ‘Juhuayiha’ (three harvests) (Table 3). Dry flower weight of ‘Fenglei’ was 17.5% higher than that of ‘Juhuayiha’.

CGA and luteolin contents of flowers were analyzed based on the methods described by the Chinese Pharmacopoeia (Committee for the Pharmacopoeia of People’s Republic of China, 2015). There were no differences in luteolin content between the two cultivars (Table 4). However, CGA content of ‘Fenglei’ was 48.3% higher than that of ‘Juhuayiha’. Therefore, ‘Fenglei’ produces a higher yield of flowers, and its flowers contain more CGA. CGA and luteolin contents of ‘Fenglei’ were 186.7% and 54.0% greater, respectively, than the pharmacopoeia requirements. Flowers of ‘Fenglei’ are well qualified to be used for medicinal purposes. Furthermore, production of ‘Fenglei’ also cut labor costs as its flowers are harvested only once a year compared with three times for ‘Juhuayiha’. 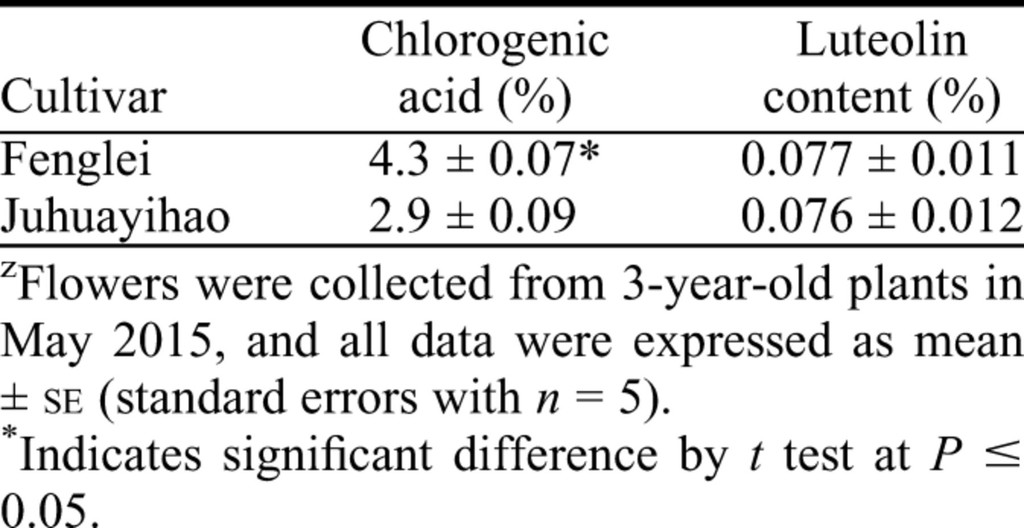 Similar to ‘Fenglei’, flowers of two mutants ‘Longhua’ (Chen et al., 2013) and ‘Huayao-Wanshou’ (Wang et al., 2013) selected from L. macranthoides also do not open, and their CGA contents were also significantly greater than their progenitor. Possibly, nonopening flowers may be a characteristic associated with high CGA content in Lonicera species. Additional research is needed to determine if lack of flower opening could be a morphological marker for selecting new cultivars with high CGA content.

Limited numbers of rooted cuttings of L. japonica ‘Fenglei’ are available for research purposes. Cuttings can be obtained from Xiaoming Wang at the Hunan Key Laboratory for Breeding of Clonally Propagated Forest Trees. 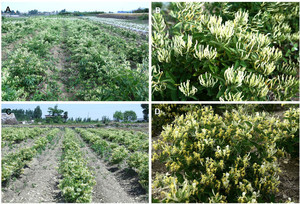