Search for other papers by D. Scott NeSmith in
Google ScholarClose

Southern highbush blueberries (interspecific hybrids containing mostly Vaccinium corymbosum L.) continue to gain a significant share of the production acreage of commercial blueberries in Georgia. A major reason for the interest in the species has been that berries ripen during the months of April and May instead of June like most of the rabbiteye (V. virgatum Aiton; syn. V. ashei Reade) grown in the state. Recent University of Georgia (UGA) cultivars, ‘Rebel’ (USPP 18138), ‘Suziblue’ (USPP 21167), and Georgia Dawn™ (USPP 24696), were released for the early market window (NeSmith, 2008, 2010, 2014). However, these and other southern highbush cultivars grown in the earlier market window generally require frost protection measures for successful production. The release ‘Camellia’ (USPP 18151) does not typically require frost protection measures; however, it is later ripening (NeSmith and Draper, 2007). There is a need for southern highbush varieties that flower late enough to miss most freeze events, yet, ripen in earlier, more favorably priced market windows.

‘TH-948’ (USPP 27323) southern highbush blueberry Miss Lilly™ has been released by the University of Georgia, College of Agricultural and Environmental Sciences along with the Georgia Agricultural Experiment Station as a later-flowering cultivar that has a short fruit development period, resulting in early season ripening. The new cultivar has consistent yield, along with good berry flavor and very good size. Because Miss Lilly™ flowers late, frost/freeze protection measures are not typically necessary to achieve successful production as is often required for earlier-flowering southern highbush cultivars.

Miss Lilly™ was selected in 2005 at the Georgia Experiment Station in Griffin, GA, originating from a cross of ‘Camellia’ × ‘Reveille’ made in 2002. The maternal parent, ‘Camellia’, is a patented UGA release (NeSmith and Draper, 2007), whereas the paternal parent, ‘Reveille’, is a nonpatented North Carolina State University–released cultivar (Ballington et al., 1991). Miss Lilly™ has been tested in plantings at the UGA Blueberry Research Farms in Alapaha and Griffin, GA, since 2007.

Miss Lilly™ is being released for commercial usage. The new cultivar has an estimated chill requirement of 500 to 600 h (<7 °C) based on observations and comparisons with other cultivars. It is an early-to-midseason southern highbush cultivar with large-size fruit (2.0 to 2.5 g/berry). Berries are medium to light blue in color and have a medium-sized, dry picking scar. Berry flavor and firmness are good. Miss Lilly™ plants are highly vigorous and have a strong upright bush habit with a narrow crown. Propagation is easily accomplished using either softwood cuttings or in vitro production. Plants are self-fertile, but planting with other southern highbush blueberry (‘Camellia’ suggested) cultivars for cross-pollination is recommended.

Miss Lilly™ was established in selection blocks at the UGA Blueberry Research Farms in Alapaha and Griffin as multiple plants in 2007. Fruit and plant data averaged across several years from these two test sites for the new cultivar and for ‘Star’ (Lyrene and Sherman, 2000; USPP 10675) and ‘Camellia’ are presented in Tables 1 and 2. Miss Lilly™ flowered late, but ripened early, near the time of ‘Star’ at both locations, owing to a relatively short fruit-development period (54–55 d). Fruit ratings showed a good picking scar, berry firmness, and flavor for Miss Lilly™ comparable to the two cultivar standards. Berry size ratings showed ‘Miss Lilly’ with a larger berry than ‘Star’, similar to the large size of ‘Camellia’. Plant vigor for Miss Lilly™ was typically better than it was for ‘Star’, but less than that of ‘Camellia’. However, ‘Camellia’ has been almost too vigorous, especially in high-input systems where it can grow excessively with an unfavorable plant growth habit that leads to “legginess” and “floppiness.” Therefore, the slightly less plant vigor of Miss Lilly™ is more desirable.

Five-year average ratings of some fruit and plant characteristics of Miss Lilly™ and southern highbush standard cultivars Star and Camellia from 2009–13 in field test plots at Alapaha, GA. Rating scales are based on a 1 to 10 score, with 1 being the least desirable and 10 being the most desirable. A value of 6–7 is generally considered to be the minimum acceptable rating for a commercial cultivar. These plants were established in Fall 2007.

Five-year average ratings of some fruit and plant characteristics of Miss Lilly™ and southern highbush standard cultivars Star and Camellia (2009–13) in field test plots at Griffin, GA. Rating scales are based on a 1 to 10 score, with 1 being the least desirable and 10 being the most desirable. A value of 6–7 is generally considered to be the minimum acceptable rating for a commercial cultivar. These plants were established in Fall 2007.

Total yield per plant was determined for three single plant replicates via hand harvesting in selection test plots at Griffin in 2011–13 (Table 3). These data show that Miss Lilly™ had less average per plant yield when compared with ‘Star’ and ‘Camellia’, although yield was consistent between years. The narrow, upright plant growth habit of Miss Lilly™ makes it suitable for higher-density plantings, which would likely result in a more competitive yield per unit land area. A more detailed view of select berry attributes, such as size, firmness, and Brix, is also presented in Table 3 for a multiyear period. Miss Lilly™ berry size was typically similar to that of ‘Camellia’ but greater than that of ‘Star’. Fruit firmness of the new cultivar was greater than that of ‘Camellia’, but less than that of ‘Star’, and Brix readings were lower for Miss Lilly™ than for the two standard cultivars.

Yield and berry weight, firmness, and Brix for Star and Camellia cultivars and Miss Lilly™ grown in Griffin, GA, during 2010–13. These plants were established in Fall 2007. 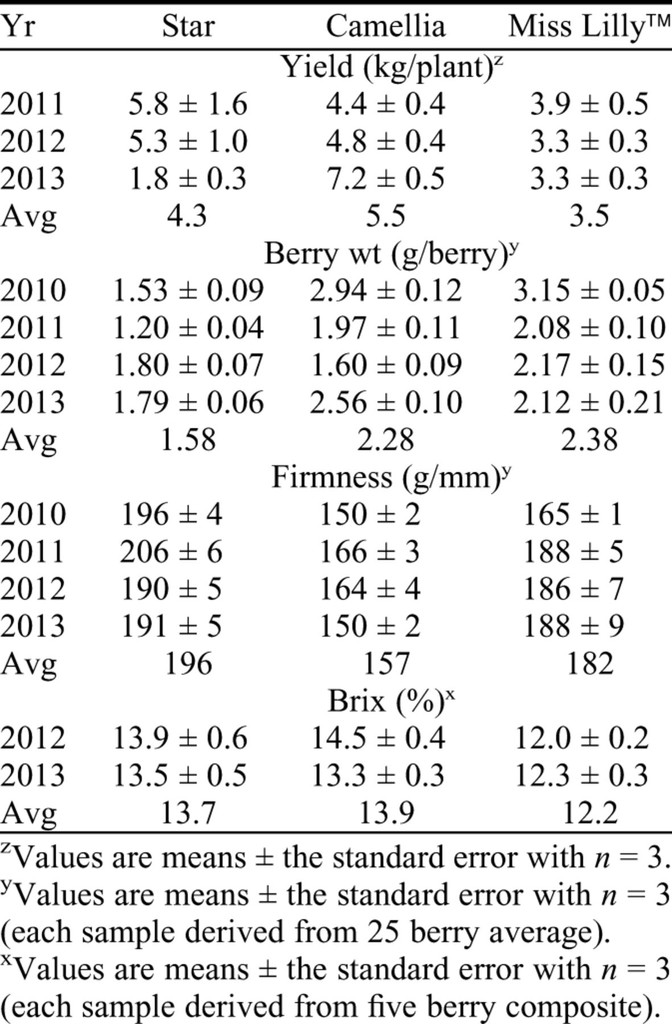 In summary, Miss Lilly™ (Fig. 1) is a southern highbush blueberry cultivar with good berry quality, including size, firmness, picking scar, and flavor. The late flowering, short fruit development period, and early ripening add to the desirability of this new cultivar, especially in areas where spring freezes are problematic for early flowering cultivars. 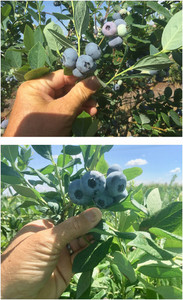 Search for other papers by D. Scott NeSmith in
Google ScholarClose