‘Fla. 8970’ is a fresh market hybrid tomato (Solanum lycopersicum) that has resistance to Tomato yellow leaf curl virus (TYLCV) conferred by the Ty-1 gene (Verlaan et al., 2013) and to fusarium crown and root rot (FCR) incited by Fusarium oxysporum f. sp. radicus-lycopersici conferred by the Frl gene (Vakalounakis, 1988). There are few acceptable tomato cultivars adapted to Florida conditions which combine FCR and TYLCV resistance. ‘Fla. 8970’ has performed consistently well on the peninsula of Florida, where its strong vine, high yield potential, large fruit size, and good fruit marketability make it an attractive cultivar choice. Fla. 7781B is the FCR- and TYLCV-resistant parent; it is nearly isogenic to the inbred line, Fla. 7781 (Scott and Jones, 2000). Inbred Fla. 8872B, the other parent, has a strong vine and very large fruit size.

The pedigree of ‘Fla. 8970’ is shown in Fig. 1. TYLCV resistance, conferred by Fla. 7781B, was derived from an F3 selection from the commercial hybrid, ‘Tygress’. ‘Tygress’ contains a very large wild-species introgression (≈30 Mb) on chromosome 6—which couples the S. peruvianum nematode-resistance introgression (Mi gene) together with the S. chilense begomovirus-resistance introgression (Ty-1 gene). The F3 selection, however, was the product of two consecutive crossing-over events selected in the F2 and F3 generations. These trimmed the introgression above and below the Ty-1 gene—eliminating the nematode-resistance locus and resulting in a much smaller wild-species introgression (≈1 Mb). This selection was also advanced as a recombinant inbred line (RIL) and used for building populations to fine-map Ty-1, and its development is further described by Verlaan et al. (2013). Five rounds of marker-assisted backcrossing were used to advance Ty-1 from the RIL into Fla. 7781, a crimson line with resistance to fusarium crown rot (Scott and Jones, 2000). The material that was developed is thus, in theory, nearly 97% genetically identical to Fla. 7781. The Ty-1 gene was fixed in the BC4F2 generation, followed by two generations of selfing and selection for horticultural performance. The Frl gene was fixed in the BC4F4 generation, followed by two seasons of evaluations and selection for trueness-to-type for the Fla. 7781 background. In Fall 2016, seed was increased from a single BC4F6 line. Fla. 8872B is a very large-fruited, globe-shaped tomato. The large fruit size originates from Fla. 8626, an inbred that was selected from the UF/IFAS bacterial wilt (Ralstonia solanacearum) breeding project, but which does not have resistance to this disease (Hutton et al., 2015). Although Fla. 7781 carries both the ogc and Frl genes, neither of these was maintained during the inbreeding process of Fla. 8872B. Seed of Fla. 8872B was increased in Fall 2015 at the F13 generation.

‘Fla. 8970’ has a strong, determinate (sp) vine that provides excellent fruit cover. The fruit are large (Table 1), flat-round, and have uniform shoulders (u or ug). Blossom scars are generally stellate and smooth, and do not enlarge and/or catface often. The fruit generally maintain a regular symmetrical shape. ‘Fla. 8970’ has been tested repeatedly in replicated yield trials, where it has consistently demonstrated high yield potential (Table 1; S.F. Hutton, unpublished data). The fruit of ‘Fla. 8970’ have excellent marketability and are highly resistant to cracking and checking. For instance, there was above-average rainfall at Balm in Fall 2014 during the last 2 weeks of November (17 cm during the last 2 weeks of November vs. the 13-year average of 3.4 cm). The timing of these rains was between the first and last harvests and resulted in many hybrids having very high percentages of culls because of cracking and checking. ‘Fla. 8970’, however, was very resistant to these defects, and this is reflected in its low cull rates for this trial (Table 1). Likewise, in Fall 2016, heavy rainfall early in the season resulted in significant bacterial spot infections and, in turn, weaker vines; many hybrids in the trial had very high cull rates because of cracking, but ‘Fla. 8970’ again showed very high fruit marketability (Table 1). The superior marketability is likely due to the combination of a stronger vine that protects the fruit and the glossy fruit epidermis itself that protects even exposed fruit. Fruit flavor of ‘Fla. 8970’ was rated over several seasons by Hutton and Scott as 3 = good flavor on a scale from 1 (poor) to 5 (excellent). On this scale, ‘Fla. 8153’ is 4, widely grown Florida tomatoes such as ‘Soraya’ and ‘Florida 47’ are 3, and ‘HM1823’ is between 2 and 3. Firmness and exterior fruit color of ‘Fla. 8970’ are good (Table 2). Fla. 7781B is homozygous for the recessive ogc gene, but Fla. 8872B is not crimson; thus, although ‘Fla. 8970’ also has good internal fruit color, it is not as red as the crimson hybrid ‘Fla. 8153’ (Table 2). Fruit size of ‘Fla. 8970’ is ≈195 g. 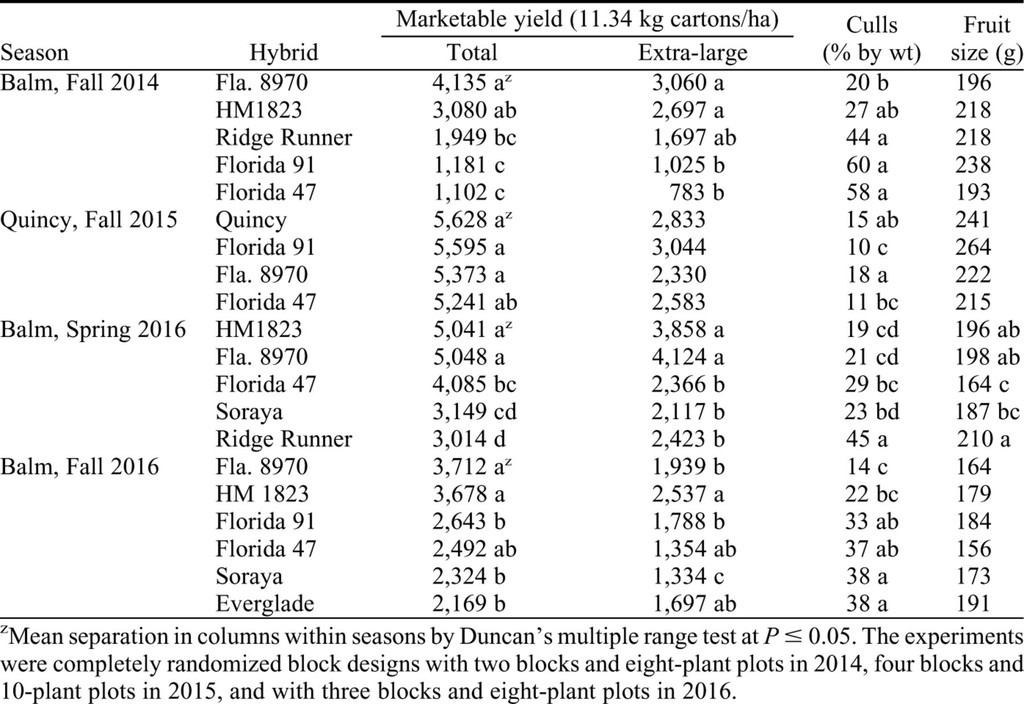 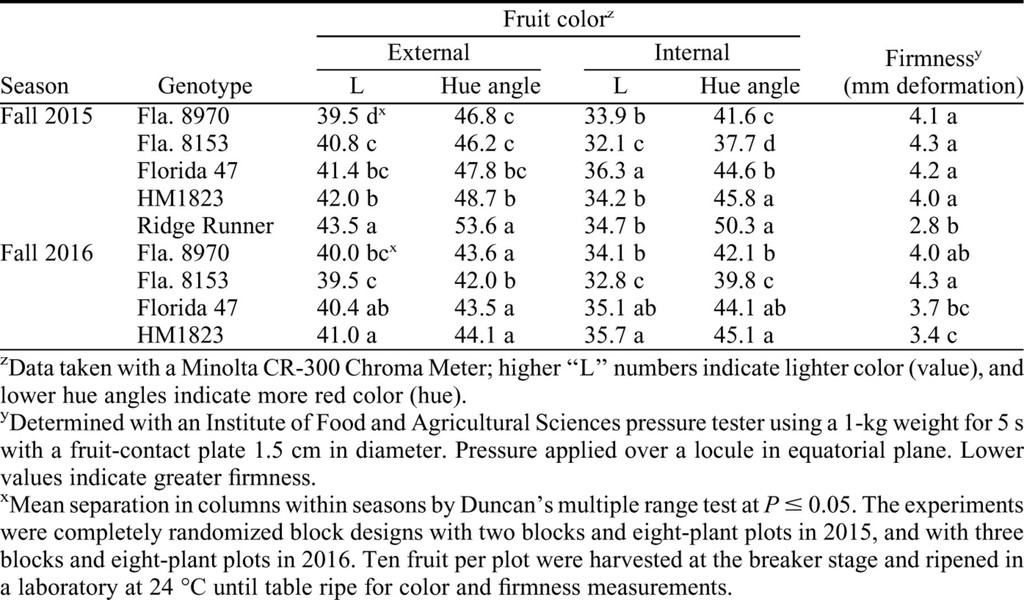 ‘Fla. 8970’ has resistance to TYLCV and other begomoviruses against which Ty-1 is effective (Table 3). It carries the Frl gene for resistance to fusarium crown rot (Table 4), as well as the I and I-2 genes for resistance to fusarium wilt (Fusarium oxysporum f. Sp. lycopersici) races 1 and 2, respectively. The Sm gene provides resistance to gray leafspot (Stemphyllium sp.), and the Ve gene provides resistance to verticillium wilt race 1 (Verticillium dahliae). Whereas Fla. 7781B is resistant to the fruit disorder, graywall, Fla. 8872B is susceptible; the hybrid, ‘Fla. 8970’, is quite tolerant of this disorder, and symptomatic fruit are typically only found under conditions of very heavy graywall pressure.

Seeds of ‘Fla. 8970’, Fla. 7781B, and Fla. 8872B are being released through the Florida Foundation Seed Producers (FFSP), P.O. Box 309, Greenwood, FL 32443 (http://ffsp.net). A seed company will be solicited for exclusive rights to produce commercial seed of ‘Fla. 8970’. Small quantities of seed for research purposes are available from S.F. Hutton under a material transfer agreement. If Fla. 7781B or Fla. 8872B is used in developing other commercial hybrids, users should contact FFSP to discuss a royalty contract. 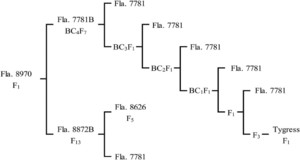