Fla. 7907C is a Begomovirus-resistant, fresh-market tomato (Solanum lycopersicum) inbred breeding line that is nearly isogenic to Fla. 7907, a parent of ‘Fla. 8153’ (Scott et al., 2008). The ‘Fla. 8153’ hybrid is currently grown and sold as a premium vine-ripe tomato under the Tasti-Lee® brand name. However, the lack of Begomovirus resistance in ‘Fla. 8153’ can limit production in environments where these viruses are problematic. Of the many Begomoviruses that are vectored by the sweetpotato whitefly (Bemisia tabaci), the strains that cause Tomato yellow leaf curl virus (TYLCV) are the most widespread and well known. Begomovirus resistance in Fla. 7907C is conferred by the Ty-1 gene, which was advanced using marker-assisted selection through seven rounds of backcrossing to Fla. 7907B. This gene is widely used in hybrid tomato breeding because it is dominant and confers a high level of resistance to TYLCV. Fla. 7907C combines Begomovirus resistance with the original characteristics of Fla. 7907, and should be useful as a parent in the development of a Begomovirus-resistant version of ‘Fla. 8153’, and in other hybrid combinations.

The pedigree of Fla. 7907C is shown in Fig. 1. Virus resistance was derived from an F3 recombinant inbred line (RIL) developed from the commercial hybrid, Tygress. This hybrid is heterozygous for a very large wild-species introgression (≈30 Mb) on chromosome 6, which resulted from recombining nematode resistance (Mi) with Begomovirus resistance (Ty-1). The selected F3 RIL, however, is the product of two consecutive crossing-over events that trimmed the introgression above and below the Ty-1 gene, resulting in a much smaller Ty-1 introgression (≈1 Mb) without nematode resistance. This RIL was used for building populations to fine-map Ty-1, and its development is described by Verlaan et al. (2013).

A marker-assisted backcrossing approach was used to introgress Ty-1 into Fla. 7907B. The reason that the Fla. 7907B background was used instead of Fla. 7907 is because some seed lots of the latter were previously determined to be segregating for resistance to fusarium wilt race 3 (I-3; J.W. Scott, unpublished data); Fla. 7907B is an advanced inbred selection from Fla. 7907, from which a homozygous I-3 selection was made in 2007. Six rounds of backcrossing were used to develop a Ty-1 near-isogenic line of Fla. 7907B. Field evaluations were conducted over multiple seasons during the inbreeding generations at the BC4, BC5, and BC6. For these evaluations, backcross lines were compared with the Fla. 7907B recurrent parent and selected for trueness-to-type. In Spring 2015, BC6F2 plants were selected to obtain homozygosity for Ty-1, and BC6F4 seed was bulked in Fall 2016.

Being a nearly -isogenic line, Fla. 7907C is virtually identical to its recurrent parent. The fruit are deep round (globe) in shape and have a deep red internal color due to the presence of the crimson gene (ogc). In Fall 2016, comparisons were made among Fla. 7907B, Fla. 7907C (homozygous Ty-1), and the hybrid between these (heterozygous Ty-1) for fruit brix, firmness, and color, to determine if the Ty-1 allele had any negative effect on fruit quality. In general, fruit quality of Fla. 7907C and the F1 was similar to that of Fla. 7907B; differences were only observed for brix, external L values, and internal hue angle (Table 1). Brix was not negatively affected by introgression of the resistance gene; rather, higher brix measurements were observed in the Ty-1 homozygote and heterozygote than in the recurrent parent. Likewise, the differences observed for internal hue angle suggest that the fruit of Fla. 7907C and the Ty-1 heterozygote were slightly more red. Fruit of Fla. 7907C had a somewhat lighter exterior color than those of Fla. 7907B, but the Ty-1 heterozygote was not significantly different from Fla. 7907B for this trait. Based on these results, there is no evidence that fruit quality would be compromised in hybrids made with Fla. 7907C vs. hybrids made with Fla. 7907B.

Brix, firmness, external color, and internal color for fruit of Fla. 7907B, Fla. 7907C, and the hybrid between these two.

The hybrid between Fla. 7907C and Fla. 8059 (Fla. 8153 + Ty1) is likewise similar to Fla. 8153. The vine of Fla. 8153 + Ty1 is determinate and maintains good fruit cover but can be slightly taller/more vigorous than the vine of Fla. 8153 (data not shown); this characteristic is commonly observed among lines carrying Ty-1 (S.F. Hutton, unpublished data) and does not seem to negatively affect the performance of this hybrid. Total and extra-large yields of Fla. 8153 + Ty1 were not significantly different from those of ‘Fla. 8153’ across three seasons of testing (Table 2). Percentages of culled fruit were also not significantly different for two of these seasons, although Fla. 8153 + Ty1 had slightly more culls in Fall 2015 (Table 2). The use of Fla. 7907C in making a TYLCV-resistant hybrid with Fla. 8059 had no apparent negative effect on fruit quality (Table 4). Fruit firmness in Fla. 8153 + Ty1 was comparable to that of ‘Fla. 8153’, and external fruit color was indistinguishable between the two hybrids (Table 3). Internally, fruit of ‘Fla. 8153’ and Fla. 8153 + Ty1 had lower L and hue angles than fruit of ‘Florida 47’ or ‘HM1823’, reflecting the deeper red color due to homozygosity for the crimson. Internal fruit color of Fla. 8153 + Ty1 tended to be slightly darker and slightly redder than that of ‘Fla. 8153’. No differences in fruit flavor were observed between Fla. 8153 + Ty1 and ‘Fla. 8153’ based on informal assessments made by two or more individuals in each of the 19 hybrid trials conducted over 4 years of testing (data not shown).

Marketable yield and culls for selected tomato hybrids harvested at the vine-ripe stage over three seasons at the Gulf Coast Research and Education Center, Balm, FL.

External color, internal color, and firmness for fruit of Fla. 8153, a TYLCV-resistant isoline of this hybrid (Fla. 8153 + Ty1), and comparison tomato cultivars at the Gulf Coast Research and Education Center, Balm, FL, in Fall 2016.

Fla. 7907C has resistance to TYLCV and other Begomoviruses against which Ty-1 is effective (Table 4). It carries the I, I-2, and I-3 genes for resistance to fusarium wilt (Fusarium oxysporum f. sp. lycopersici) races 1, 2, and 3, respectively. It has the Sm gene that provides resistance to gray leaf spot (Stemphyllium sp.) and the Ve gene that confers resistance to verticillium wilt race 1 (Verticillium dahliae). Fla. 7907C is moderately susceptible to the fruit disorder graywall and symptomatic fruit can be found under conditions of moderate to high pressure for the disorder.

Seed of Fla.7907C is being released through the Florida Foundation Seed Producers, Inc. (FFSP), P.O. Box 309, Greenwood, FL 32443 (http://ffsp.net). If Fla. 7907C is used in developing other commercial hybrids, users should contact FFSP to discuss a royalty contract. Small quantities of seed for research purposes are available from S.F. Hutton under a material transfer agreement. 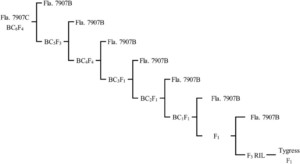