‘Itasca’ is a new grape cultivar for winemaking, which has been bred for use in cold climates due to its ability to survive and produce high-quality fruit in USDA hardiness zone 4 (average minimum −37.2 to −34.4 °C). The vines have demonstrated improved winterhardiness compared with other cold climate cultivars such as Marquette, La Crescent, and the Frontenac series. ‘Itasca’ exhibits disease and insect resistance, which may make it a candidate for reduced spray programs using integrated pest management or organic approaches. At harvest, Itasca fruit has improved juice chemistry compared with the previously listed cultivars, making it more suitable for wine production specifically a reduction in total titratable acidity (TTA) compared with other cold-hardy, white wine cultivars Frontenac gris and La Crescent. ‘Itasca’ has more sugar at harvest than ‘Brianna’, another cold-hardy variety with low total acidity levels.

The grapevine ‘Itasca’ (Fig. 1) was identified at the Horticultural Research Station (HRC), a Minnesota Agricultural Experiment Station located near Excelsior, MN (44°52′9.2496′′ N, −93°38′15.435′′ W). The seedling vine originated from a cross made by P. Hemstad in 2002 (Fig. 2) between the maternal plant ‘Frontenac gris’ (Vitis riparia 89 × Landot 4511) (Luby and Hemstad, 2003) and an advanced breeding selection, MN 1234 (MN 1095 × ‘Seyval blanc’), as the pollen parent. Both parents are interspecific hybrids derived from V. riparia accessions with superior winterhardiness (Fig. 2). In addition to V. riparia, the pedigree of ‘Itasca’ contains the following Vitis species: V. aestivalis, V. berlandieri, V. cinerea, V. labrusca, V. rupestris, and V. vinifera. The seedling vine was identified in 2009 for exhibiting improved fruit quality, cold-hardiness, and disease resistance attributes and was designated as selection MN 1285 for testing, and propagated by hardwood cuttings.

‘Itasca’ was compared with other cold-hardy, hybrid wine grapes including its parent ‘Frontenac gris’ for the growth and yield observations. The research vineyards have a minimal spray program to allow for evaluation of resistance to pests and diseases. Vines were grown on their own roots and evaluated as top wire, high-cordon vines grown bilaterally with multiple trunks as is common practice in Minnesota. Vines were dormant pruned, and weeds controlled through mechanical and chemical methods including pre- and postemergent herbicides. ‘Itasca’ has a more vigorous growth habit than ‘Frontenac gris’, but less vigorous than ‘La Crescent’. This cultivar has forked tendrils that are shorter in length than La Crescent tendrils. The trunk bark is moderately flaky with segments 5 mm × 5 cm in length.

The average cluster weight for ‘Itasca’ is 145 g, compared with ‘La Crescent’ which is 87 g, or ‘Frontenac gris’, which has average clusters weighing 124 g. ‘Itasca’ clusters have an average of 86 berries per cluster with mean weight of 1.27 g/berry. The average yield per vine was calculated from harvest data from 2010 to 2016 (Table 1). The highest yields of the observed varieties were in ‘Frontenac gris’ with 7.05 kg/vine, followed by ‘La Crescent’ with 6.17 kg/vine, and then ‘Itasca’ with 5.29 kg/vine. The average yield for ‘Marquette’ was lower with 4.95 kg/vine on high cordon and 2.70 kg/vine on vertical shoot positioned vines (VSP) (Table 1). ‘Brianna’ had the lowest yield per vine at 3.54 kg. In Minnesota, it can be as little as 1 week between budburst between ‘Marquette’ and ‘Frontenac gris’, with ‘Itasca’ budburst between the two. The average bloom time in Excelsior, MN, was 15 June, about the same as ‘Marquette’.

Mean values and sd for yield per vine and juice chemistry attributes at harvest for vintages 2010–15.z

‘Itasca’ vines were grown in vineyards with an integrated pest management approach. Preventative fungicide sprays were limited to no more than three applications per season. Insecticides were applied only after scouting revealed significant damage from pests such as grape berry moth (Paralobesia viteana Clemens), phylloxera (Daktulosphaira vitifoliae Fitch), or Japanese beetle (Popillia japonica Newman). The vineyard plantings included highly susceptible cultivars and breeding lines that were adjacent to these plants and serve as susceptible checks. The ‘Itasca’ vines were observed for disease and pest signs and symptoms. Over 6 years of evaluations (2011–16), the vines have shown a very low incidence of powdery mildew (Uncinula necator), which is attributed to genetic resistance. Molecular markers have linked the resistance at the Ren3 locus (Teh et al., 2017). The Ren3 resistance has been overcome in some growing regions by local pathogen populations (Cadle-Davidson, personal communication). No evidence of downy mildew (Plasmopara viticola) or Botrytis has been observed. A slight amount of foliar black rot (Guignardia bidwellii) has been seen in some years. Limited foliar infestation by the insect pest phylloxera was observed in 2016. Less than five leaves were identified with phylloxera galls, compared with ‘Frontenac’, which is highly susceptible and had many shoots entirely infested with galls. A single 2-year-old vine-grown VSP trellis system exhibited trunk injury, although no indication of crown gall infestation (Agrobacterium vitis) was detected. In the very wet growing season of 2016, bunch rots (of undiagnosed type) were observed in Itasca as well as many other cultivars.

The moderately vigorous growth of ‘Itasca’ on the high wire cordon system in fertile soils (high organic matter) as tested at the HRC has shown that a suitable planting distance in the row should be at least 1.83 m between plants and it is recommended that growers evaluate their own site conditions. Pruning weight data were not collected due to vineyard practices such as shoot thinning, which would confound results. Allowing 2-year-old vines to produce fruit in the establishment years can help de-vigorate excessive vine growth, as observed in a VSP planting established in 2015 at the HRC, without predisposing vines to winter injury. The ‘Itasca’ vine is amenable to VSP due to the presence of upright shoots along the cordons and the plasticity in training. However, no data have been collected on fruit yield when grown as VSP. Dormant season pruning is necessary to maintain vine yields and fruit quality through selective removal of fruiting spurs and canes.

Wines have been produced from ‘Itasca’ berries since 2009. A standard protocol was used for the microvinification each year. Berries were pressed as whole clusters in a manual, basket-style screw press or bladder hydro press depending on the harvest volume in each year. The pressed juice was settled for 24 h at 13 °C, then racked and allowed to come to 20 °C. The juice was amended with yeast nutrients Go-Ferm™ (0.5 g·L−1; Danstar Ferment AG, Zug, Switzerland) and Fermaid K™ (0.15 g·L−1; Danstar Ferment AG), and inoculated with the yeast Lalvin DV10 (0.4 g/L; Danstar Ferment AG, Fredericia, Denmark) supplied by Scott Laboratories, Inc. Petaluma, CA. Fermentation was conducted for 24 h at 20 °C before moving to 13 °C to complete the fermentation (to dryness). The wine was settled for 2–5 d before racking, and adjusted to 40 ppm FSO2 and cold stabilized at 1 °C for 14 d before bottling.

At harvest, juice samples were evaluated for sugar and acid content (Table 1). Over the six vintages from 2010 to 2015, ‘Itasca’ was harvested between 12 and 28 Sept., with a typical harvest around 24 Sept. (Table 1). At the HRC, ‘Itasca’ is picked earlier than ‘Frontenac gris’. The mean SSC of ‘Itasca’ is similar to ‘Frontenac gris’, but higher than ‘La Crescent’ and ‘Brianna’ (Table 1). The range for SSC for ‘Itasca’ at harvest ranged from 24.8 °Brix in 2014 to 28.2 °Brix in 2012. The TTA for ‘Itasca’ was lowest in 2012 with 8.32 g·L−1 but was highest in 2014 at 11.53 g·L−1. The lower mean TTA and lower malate values, in combination with high SSC, set this cultivar apart from other cold-climate cultivars. The means for juice malate concentrations from fruit harvested for each cultivar were as follows: Itasca (3.05 g·L−1), Frontenac gris (6.43 g·L−1), La Crescent (7.33 g·L−1), Brianna (2.8 g·L−1), and Marquette (4.63 g·L−1) (Table 1). The lower concentration of malic acid in ‘Itasca’ juice is favorable for wine making. ‘Brianna’, another low-acid wine had much lower sugar (5.5 °Brix less) at harvest than ‘Itasca’ (Table 1). Nitrogen content of juice and must is highly variable across cultivars and locations (Butzke, 1998; Hagen et al., 2008), but adequate nitrogen is critical in winemaking for yeast nutrition to prevent stuck fermentation. The relatively low FAN and YAN values for ‘Itasca’ (Table 1) provide evidence that yeast nutrition should be monitored and supplemented throughout winemaking where needed (Bely et al., 1990).

Mean values and sd for wine chemistry attributes after fermentation to dryness using a standard winemaking protocol for vintages 2010–13.

The ‘Itasca’ berries are pleasant for fresh eating, but contain fully developed seeds and have a high seed to flesh ratio. The berries are also much smaller than conventional table grapes such as ‘Swenson Red’. The fruit flavors have been described as subtle notes of pear, gooseberry, honeydew melon, and star fruit. The flavor attributes of the juice translate to the wine, although the wine has been described as somewhat neutral. Sensory analysis has elicited wine descriptors such as pear, quince, star fruit, melon, and subtle honey notes. ‘Itasca’ differs from other hybrid varieties and does not have the typical flavor profile of V. labrusca wines like ‘Brianna’ or ‘Edelweiss’. The wine color is golden to light green. Because of the light and subtle flavors, as well as reduced acidity compared with ‘Frontenac gris’ or ‘La Crescent’, ‘Itasca’ is likely to be a high-quality varietal wine or used in wine blends to improve mouth feel and flavor.

The University of Minnesota has filed an application for a U.S. Plant Patent on the ‘Itasca’ grapevine. Nurseries wishing to grow and sell ‘Itasca’ plants must first sign a license agreement, which can be arranged with the University of Minnesota Office of Technology Commercialization. More information can be found at http://mnhardy.umn.edu/commercial-growers/license/license-grapes. Contact B.J. Haun (haunx003@umn.edu) for a list of current licensees or to inquire about a license agreement for the propagation and sale of ‘Itasca’ grape vines. 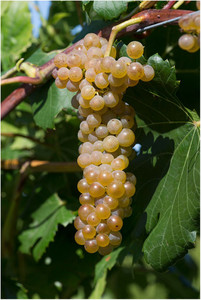